In multi-class racing there is always something satisfying about having a Champion who has been competing in the largest and most competitive class.

2014 has been a case in point as James Bishop was confirmed as BRSCC Alfashop Alfa Romeo Championship winner at Rockingham in September. James has enjoyed an exemplary season with his Bianco Auto Developments prepared 156, finishing all 12 races, taking five wins, five second places and two thirds showing how much consistency is a strong factor in championship success. James would probably admit that arch rival James Ford is perhaps the quicker driver, also with 5 wins to his credit, but there have also been wild swings in the latter’s performances during the year, including two first lap retirements. By rights, James (Ford) should finish the season as runner-up in both the overall championship and class E as we reach the final double header on the Silverstone International circuit. 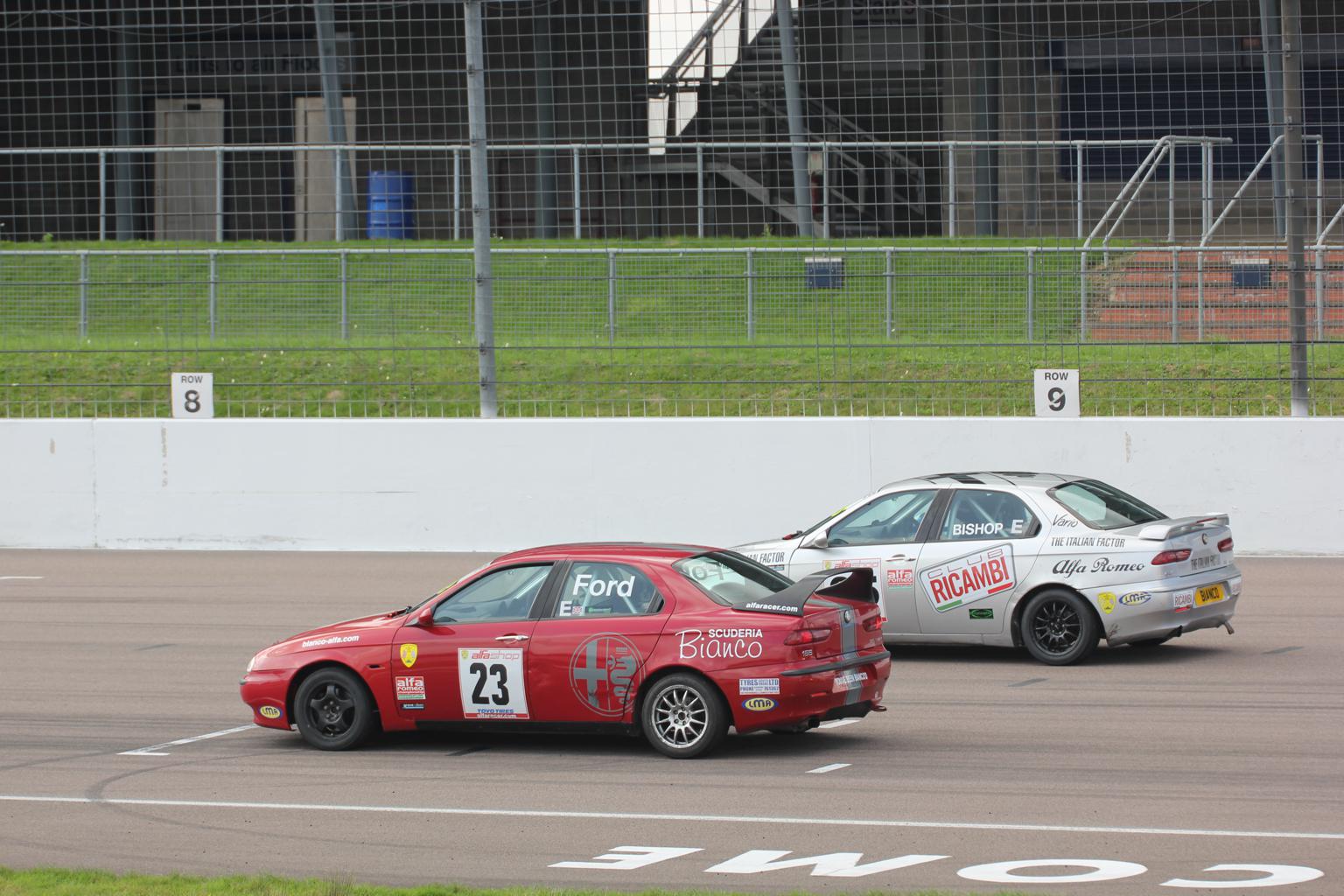 A late surge by the ever improving Tom Herbert put him into contention after Rockingham while Stephen Potts (now in a 156), Roger Evans and Graham Seager all have a mathematical chance of taking the place. Sadly, though, Tom has decided that with funds low and a win last time out under his belt, he will miss Silverstone. This gives him the added bonus of knowing that his 156 will be in one piece for the start of 2015!

Undoubtedly the record 18 car Class E field will again give us some close and spirited racing but, as at Rockingham, the Modified cars (classes A1 and A2) could well steal the show with the returning Ian Stapleton’s 3.8 litre GTV6 (a winner at Donington back in May) fighting it out with Graham Seager’s supercharged GTV and the very quick 156 Turbos of Anthony George and Vincent Dubois. After two championship winning seasons in 2012 and 2013, Roger Evans is returning to Class A1 and will be bringing his newly built 3.8 147 GTA to Silverstone for its debut.  Chris Snowdon’s 33 16v took two wins at Rockingham but may only appear on Sunday while Bryan Shrubb’s similar car, also a race winner this year, should be in the mix for victory. Brothers Barry and Roger McMahon will be sharing the former’s 3 litre GTV as Barry’s 156 is still not rebuilt after its Spa crash.  Dave Peddie will be giving the Pro alfa built Mito another outing and a welcome return will be made by Darelle Wilson in the GT Diesel that we haven’t seen since Oulton at the end of May. He will be joined in Class B by Malcolm Chapman’s 75 3 litre. 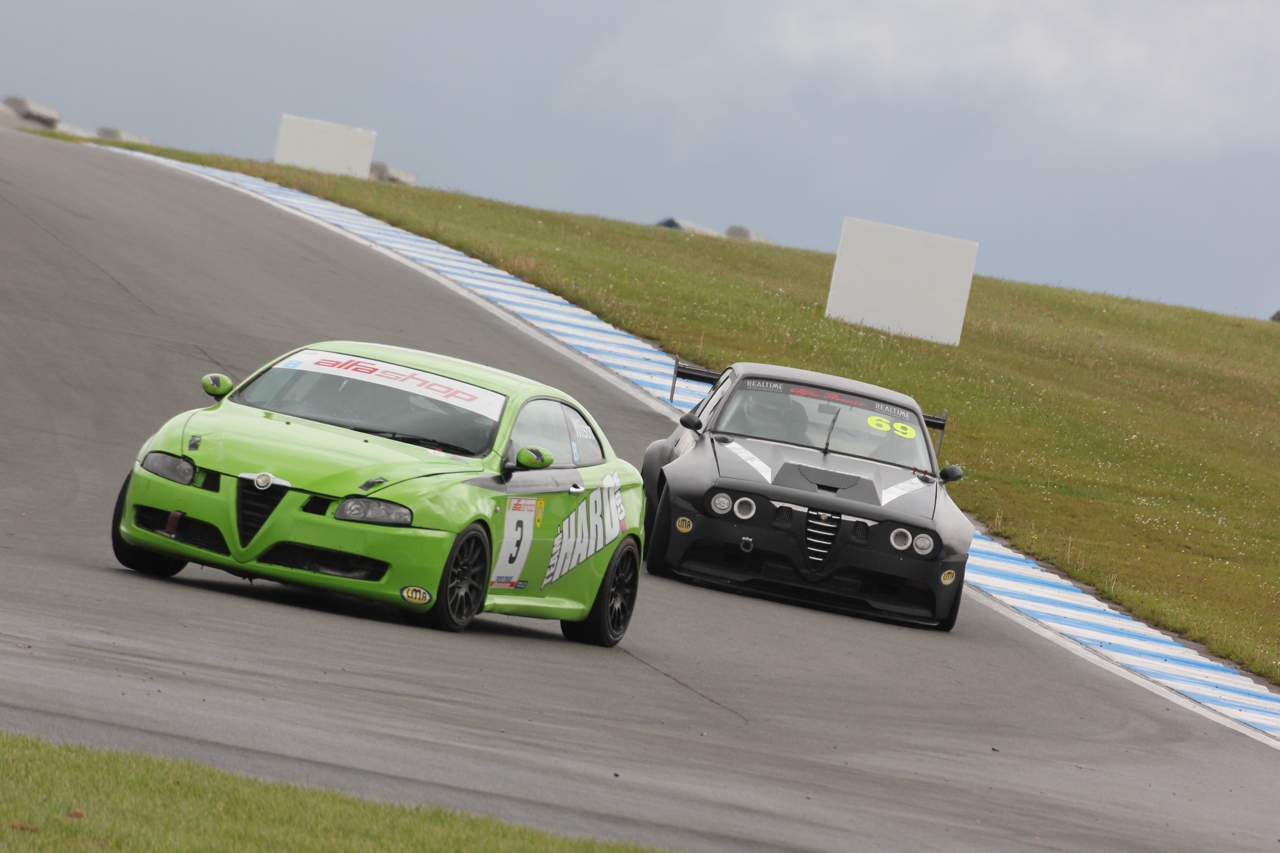 Class A2 in the Championship is still up for grabs as Nick Anderson is being challenged by Bryan Shrubb. As I started writing this preview, Nick’s 33 was at Brunswick Motorsport having a head gasket fixed (following on from a gearbox rebuild after Rockingham) and but all must have gone according to plan as his entry is now confirmed. Ray Foley will be the sole runner in Class C but will be driving Roger Evans’ 156 GTA instead of his own GTV 3.2.

Going back to Class E – there are several drivers who could upset the established order. Jon Billingsley (147) and Andy Hancock (156)  have shown ever improving form during the season while 2009 Champion Paul Plant is having a rare UK race with another 147. 17 year old Tom Hill was outstanding at Anglesey and will be making his second appearance with another 156.  Others not to forget are Dave Messenger and Andy Inman in their 156s  and Kristian Leith (145 Cloverleaf).

2010 Champion Mel Freeman will be back in the Spur 156 for the first time since Donington in May and Stacey Dennis hopes for another couple of good races a year on from when she made her debut on the same circuit. A late Spur entry is Tom Eastwood with his 145 who took a fine 2nd place at the same meeting last year.  Steve O’Brien would love to repeat his Snetterton podium with his 147 but with such a big field its going be hard work! 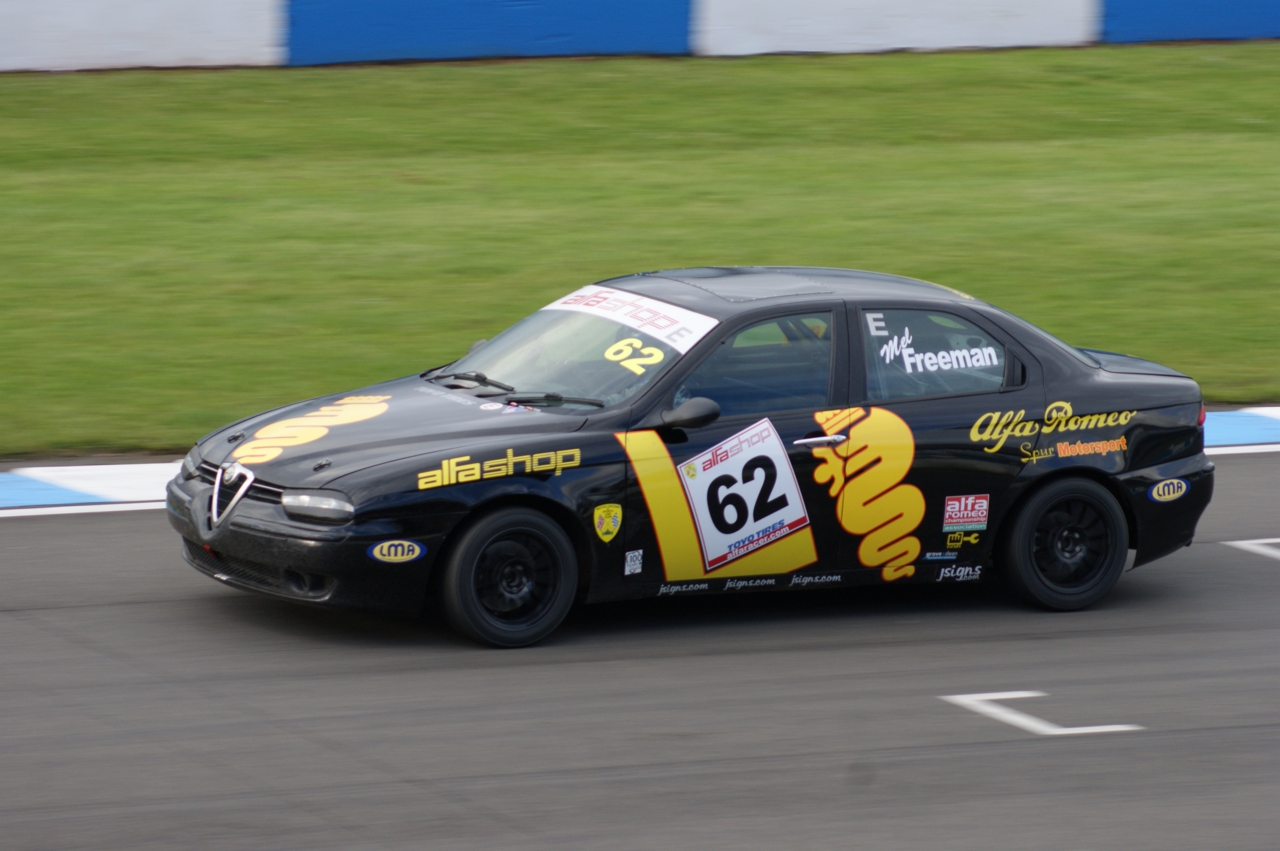 Saturday evening will see the Championship gather together for a hog roast party in the Silverstone Wing Paddock  at 6.00 pm and we hope that as many drivers, teams, friends and families as possible will join us. A full menu can be found here and contributions would be greatly appreciated.

The winner of the second race on Sunday will receive the prestigious Kevin Griffiths Trophy, awarded in memory of a staunch supporter of the Championship who sadly lost his life in an accident at Mallory Park in 2002.