Richard Stevens describes his first few meetings as an alfaracer.

I thought I would share some experiences and feelings about my new found Racing Driver obsession!

A sombre note to start with. The man I sponsored and who provided me with the inclination to actually go racing, Bob Trotter, died peacefully in April this year. He was, I am sure, an inspiration to many and his gritty realism saw him outlast many of the Doctor’s expectations of him.

Thoughts are with Jan and Family. Racing will miss you Bob as will I.

Bob and I agreeing on sponsorship & his Alfetta in the wet

Firstly, I think I need to mention the car, in fact, no, I need to wax lyrical about it! The 145 is a true Alfa great. Well, Ok, it’s a Fiat in drag but as drag queens go this one is akin to Terrance Stamp in “Priscilla Queen of the Dessert” and if you have never seen the movie, do. It is, like the 145, a true classic! 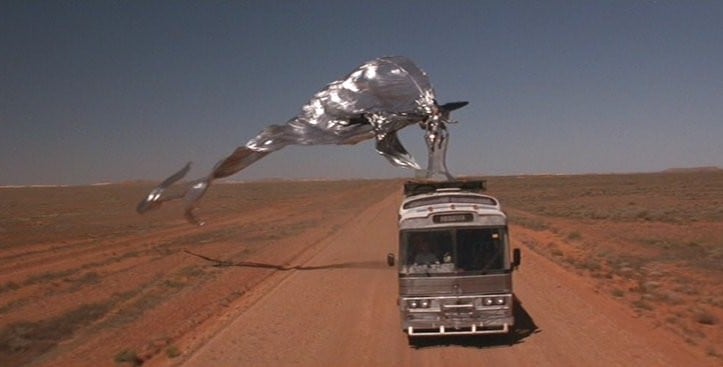 The 145 as a road car is a spacious, comfortable car that goes well and handles in a most remarkable fashion for a front wheel drive. Almost neutral cornering with an ability to oversteer if pushed that just makes me grin every time I go down the farm track in my road going version. I race in the Alfa Romeo Championship and am currently the only 145 on the grid, surrounded by 156’s, a couple of 147’s and a couple of 146’s. My first thoughts were that maybe I should have gone for the 156 as they seemed so much quicker than me but my mind is changing on this. Of late, the 145 has held it’s own against them. I am pretty well convinced that it is not the car that is challenged by the 156’s but me! As I improve then the gap seems to lower. 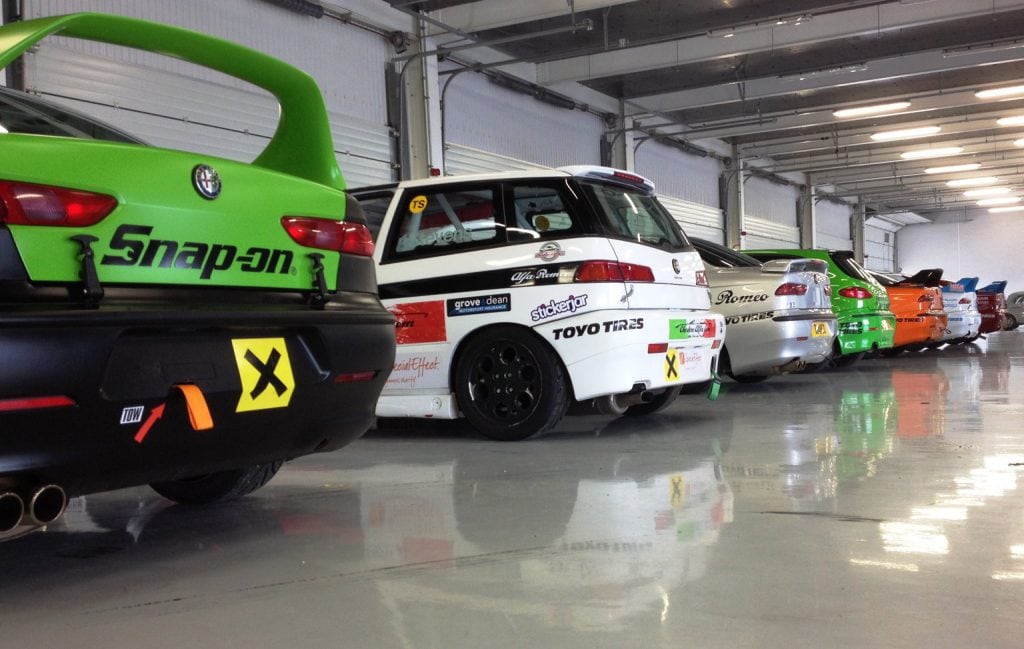 The 156 is a larger, heavier car but it does have the benefit of fully independent suspension all round wheras the 145 has rear trailing arms. However, the 145 sits naturally lower and due to its reduced size and weight, it does seem to compete well in the corners, favouring a twisty track. Now, the series is the “Twin Spark Cup” and no engine modification is allowed so the 2.0 litre TS engine fitted to all the cars in the class makes a pretty level playing field leaving preparation and driving ability to be the main factors. Unfortunately I have failed on both of these elements. 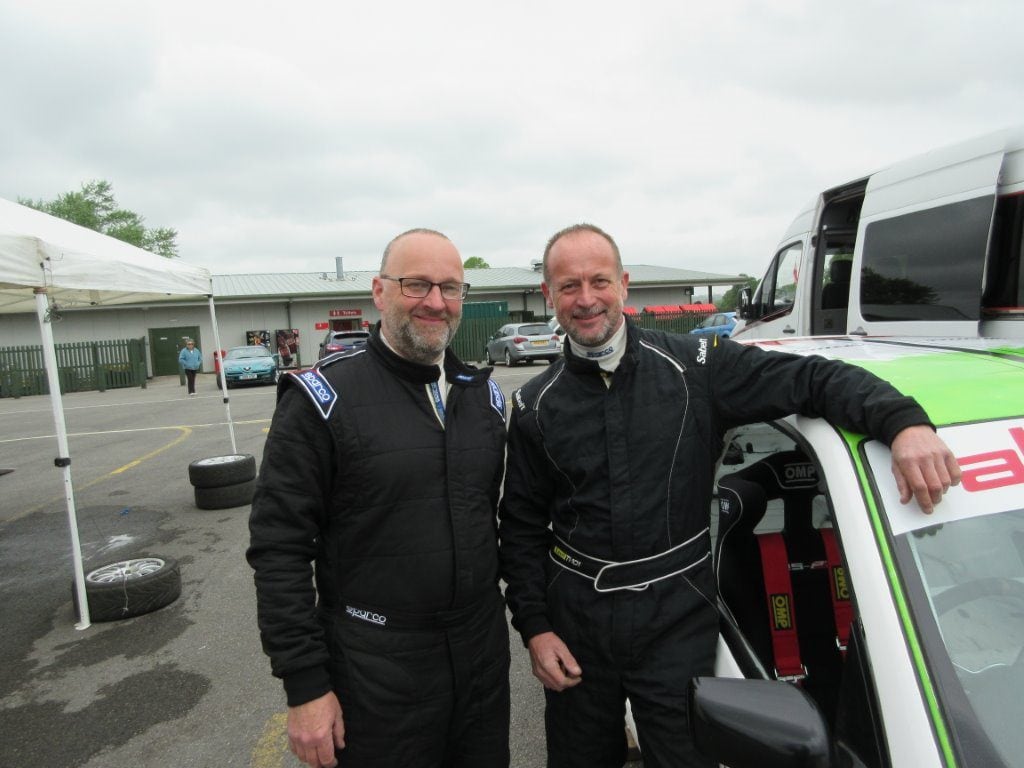 “Nerves” best sums up the Friday feeling. I decided that a day of testing would be beneficial before the racing so I booked a full day of testing for the Friday. Arriving late on the Thursday night in my newly built “Race Van” or “Sports home” as I have now called it. Basically a Mercedes Sprinter fresh from DPD courier duties with B&Q and Ikea stuff nailed into it to make it liveable for me and my pet mechanic. Said pet being 6’8” meant I had to custom make him a bed which still creates massive mirth watching him try and shoe horn his ridiculous size into the bunk! 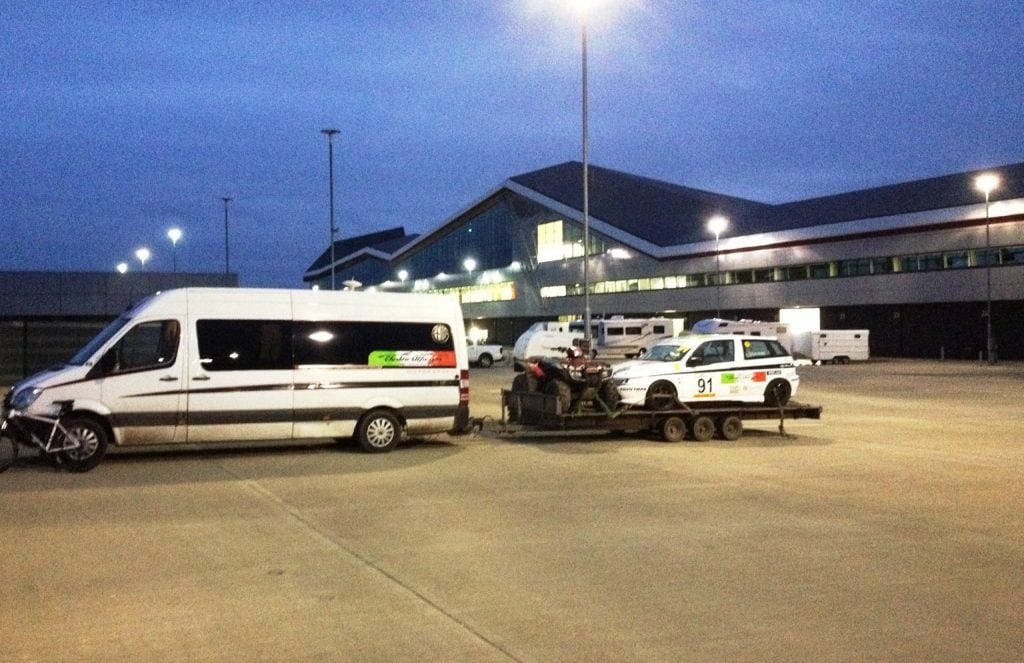 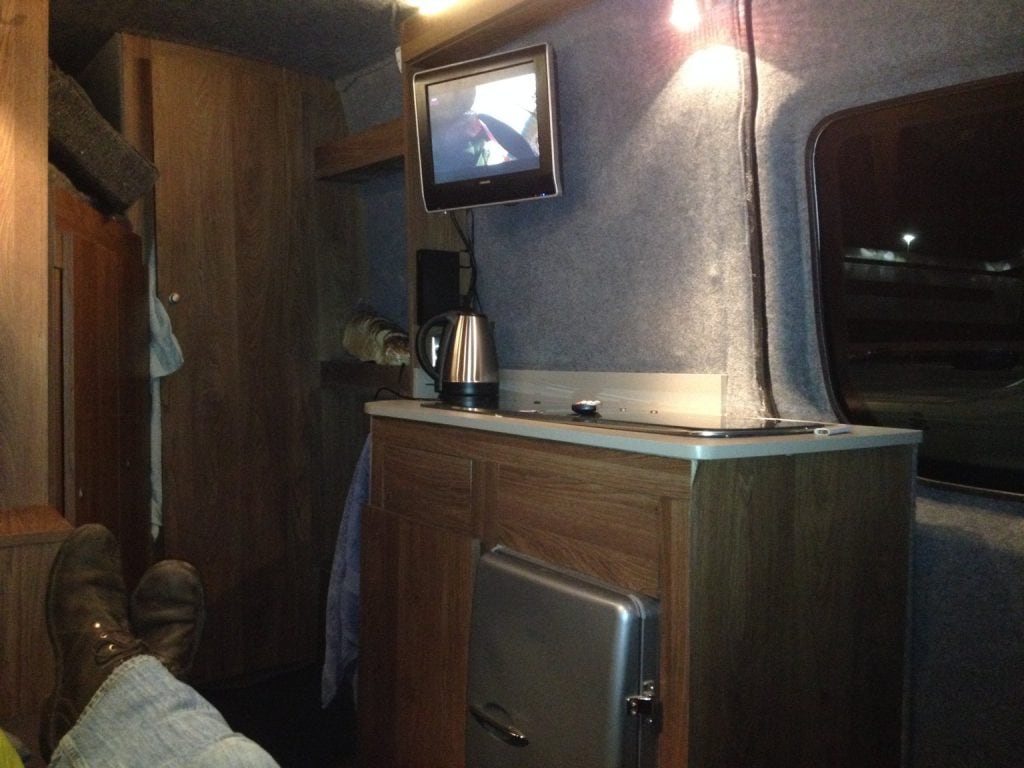 Feet up on the Thursday to calm the nerves

Friday came with the first testing session. Dodging tuned up Beetle type things in the “Fun Cup” left me with no doubt I had a way to go with the handling characteristics of the 145. Basically a bucket of understeer followed buy sudden and worrying oversteer! After a couple of sessions a very helpful Gary of Bianco sorted the tracking and toe out for me and I was now testing a totally transformed car that seemed to go round any corner at any speed. Scrutineering on the Saturday created a whole world of new nerves. Would this home built race car that was glued and nailed together by rank amateurs be good enough? Yes, it was as it turned out! I drove back to the pit garage feeling as proud as a kid with a science project. Qualifying was intense. Totally aware that I needed to do well, I chased another car driven by a more experienced racer and promptly spun off. Eventually I managed to get a few decent laps in and qualified 10th. Not exactly pole but I was not last and that mattered.

Lining up on the grid after the formation lap was a moment. In front of that massive wing building, 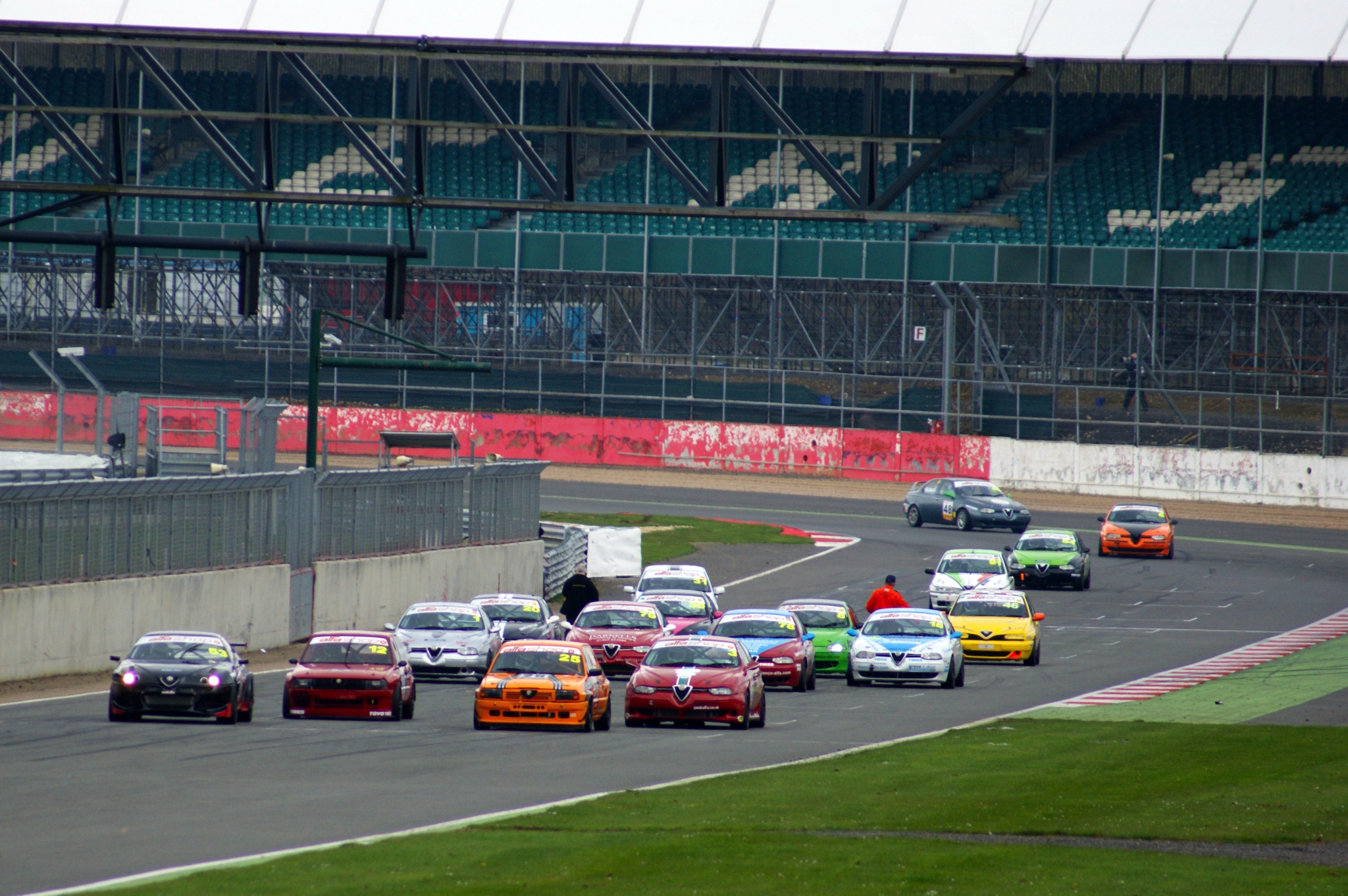 The first race started with me losing a few erm “personal” pounds just before thanks to my “fight or flight” response to nerves kicking in and having nobody to punch. Lining up on the grid after the formation lap was a moment. In front of that massive wing building, I felt tiny. The lights lit red, pause, lights went out. All around me sped off apart from me, for what felt like minutes I sat there waiting for a green light!! Buffoon! I kicked my self and booted the throttle getting to the first corner madness toward the rear of the pack and quickly coming along side the 146 that I would spend the next 20 minutes battling with. Richard Ford is in his second season and the 146 seemed about the same power so we had an epic battle for 10th place including a bit of an accident, sorry, a “racing incident”. 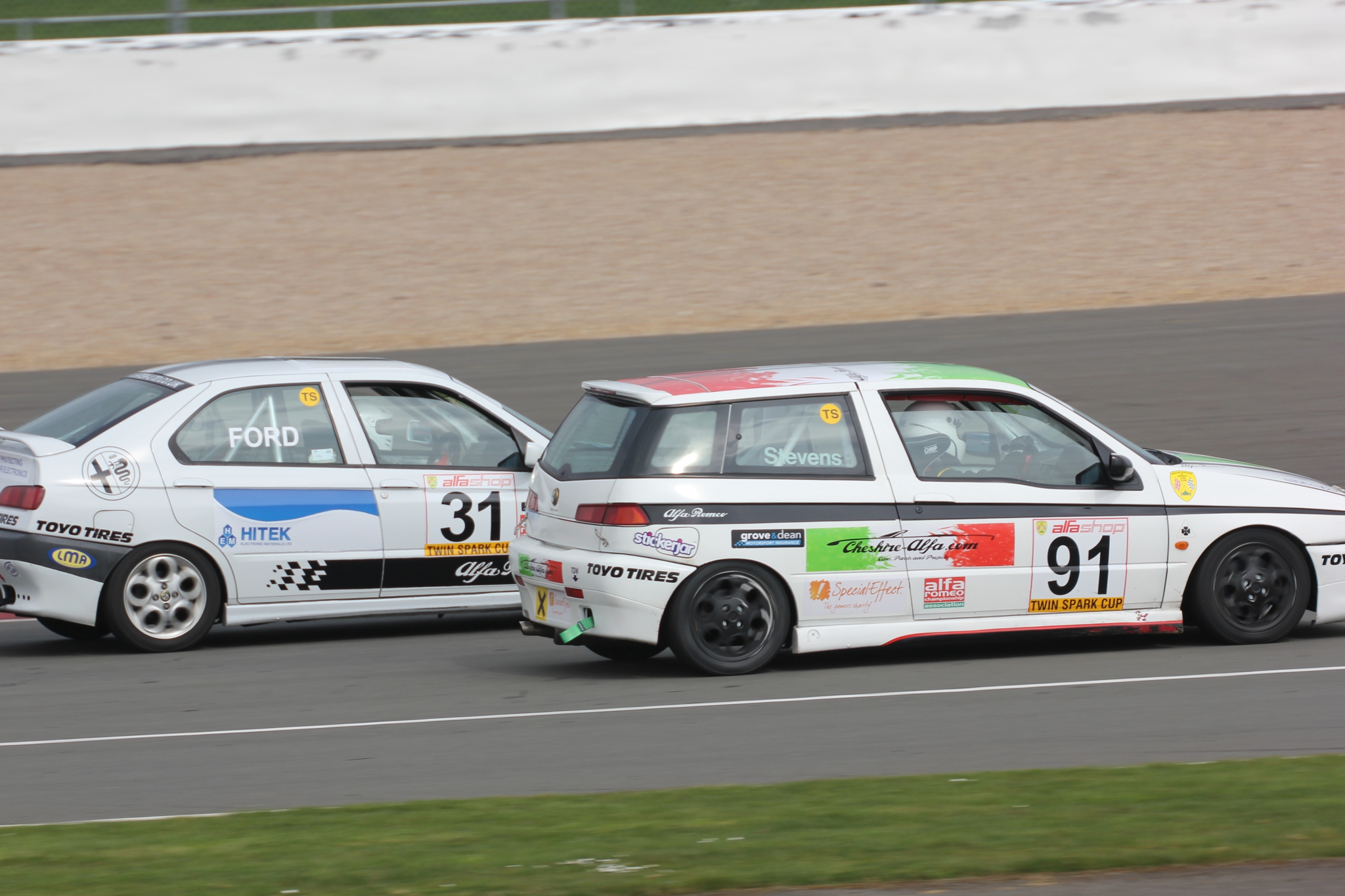 Second race saw a much better start and had the track to myself for most of it only to get entangled with the 156 of Simon Cresswell on the last lap but just managed to hold onto 7th. So, both my first races ended with me in the points. Amazed and proud I watched others get presented with trophies feeling confident my time would come. 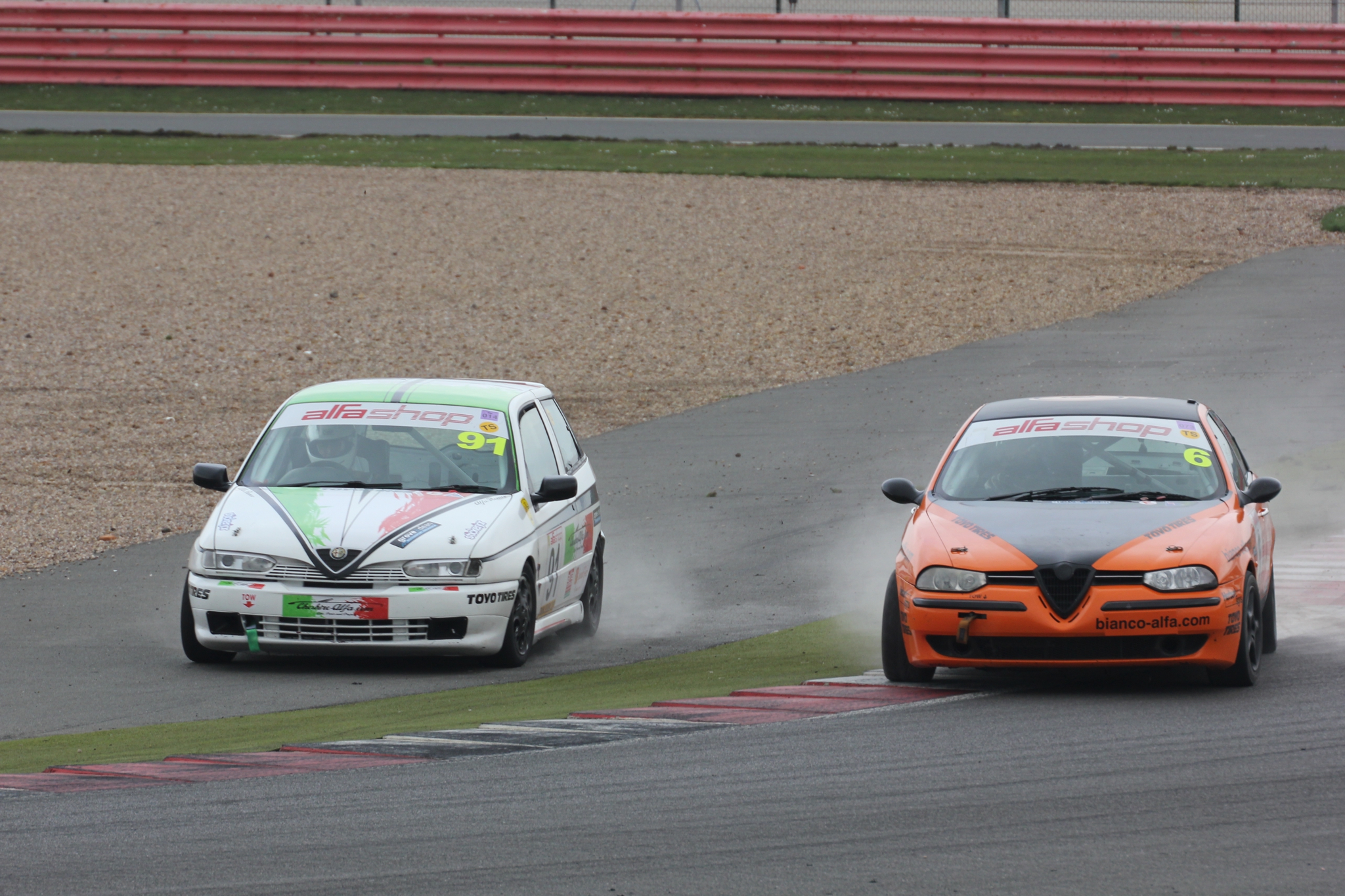 Back to Northamptonshire for Rockingham a month later. Once again testing on the Friday but this time nerves were replaced with enormous excitement! I couldn’t wait to get out on track. I was buzzing. The first session and the car was going well, the track was brilliant and the feeling was amazing. I am a racing driver I thought. However, the third session saw a different outcome. A bang followed by an odd noise and then no clutch! The pedal locked then released with another bang. I jammed it in to a gear and headed off the track and back to the paddock. By this time it was getting on for 1600 on the Friday with qualifying early the next day. So, only one thing for it. Helped by pasta and beer, we managed to remove the gearbox and pull out a destroyed clutch, a very helpful fellow racer popped home and brought me back a spare one which, by 0133 we had back in. The smell of gear oil in the van was a lot worse than the small of satisfaction at having changed a clutch in the paddock. 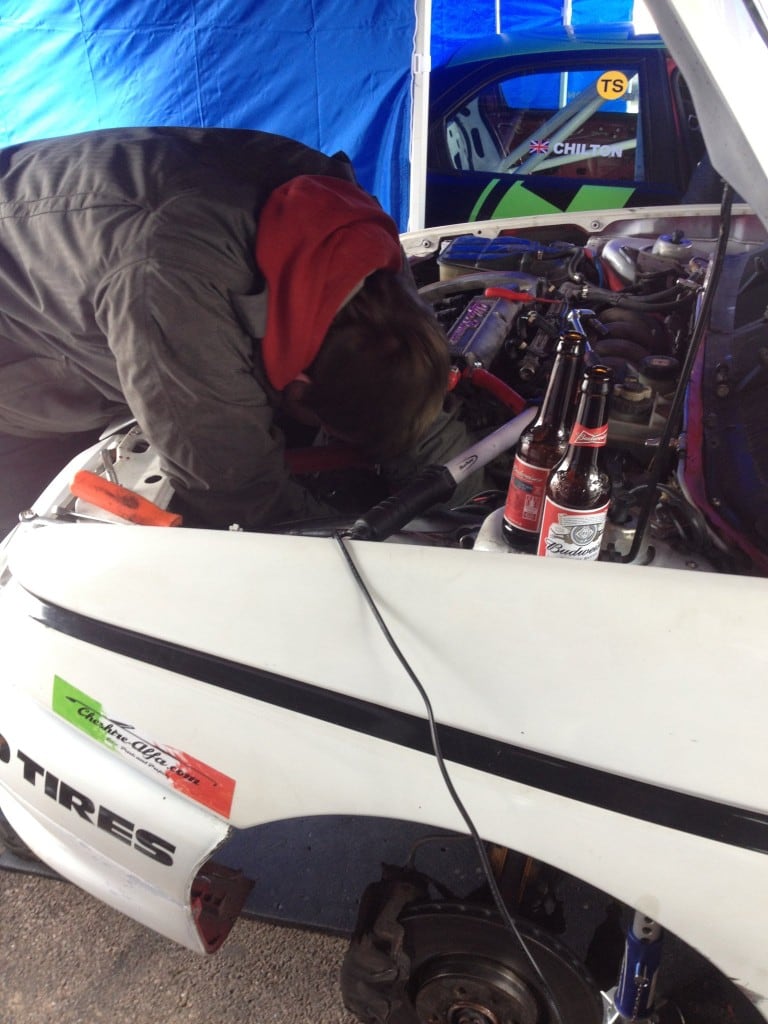 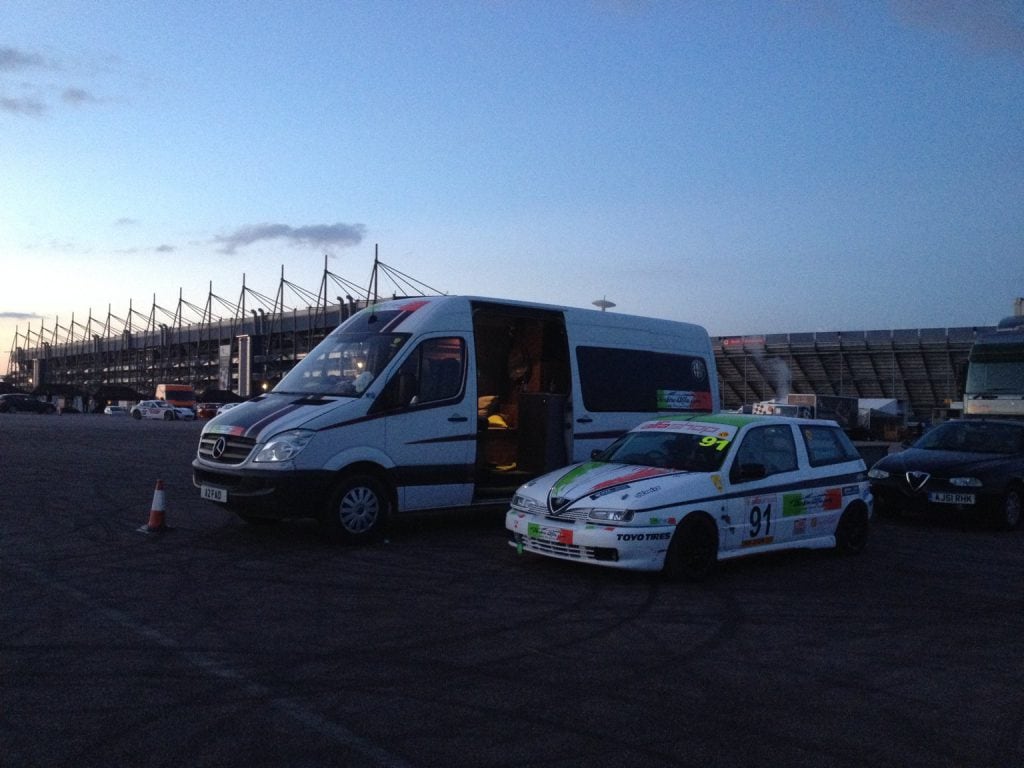 Qualifying was a disaster. It appeared that the clutch damage had also damaged the gearbox. No 5th and no reverse, almost impossible to go from 4th to 3rd and I qualified 13th. Also, the fact my over sized side kick forgot to fit the transponder meant a 4 lap delay whilst he went to get it. First race was better but I still had major gear change issues and after a great battle with Stacey Dennis came in 12th. Overnight we stripped off all the gear linkages and rebuilt them ready for the race on Sunday morning. 5th came back but still no reverse. Sleep would help as would a shower. At this point the fact I had fitted a shower in the van was most welcome as the outer paddock at Rockingham has the most atrocious facilities. All that money spent and they couldn’t be bothered to fit a single working shower? Really! Next morning was very “English”. Going outside let alone onto a track was not a great prospect but it had to be done. It was hounding down. Much of the track was flooded but the race was to go ahead. 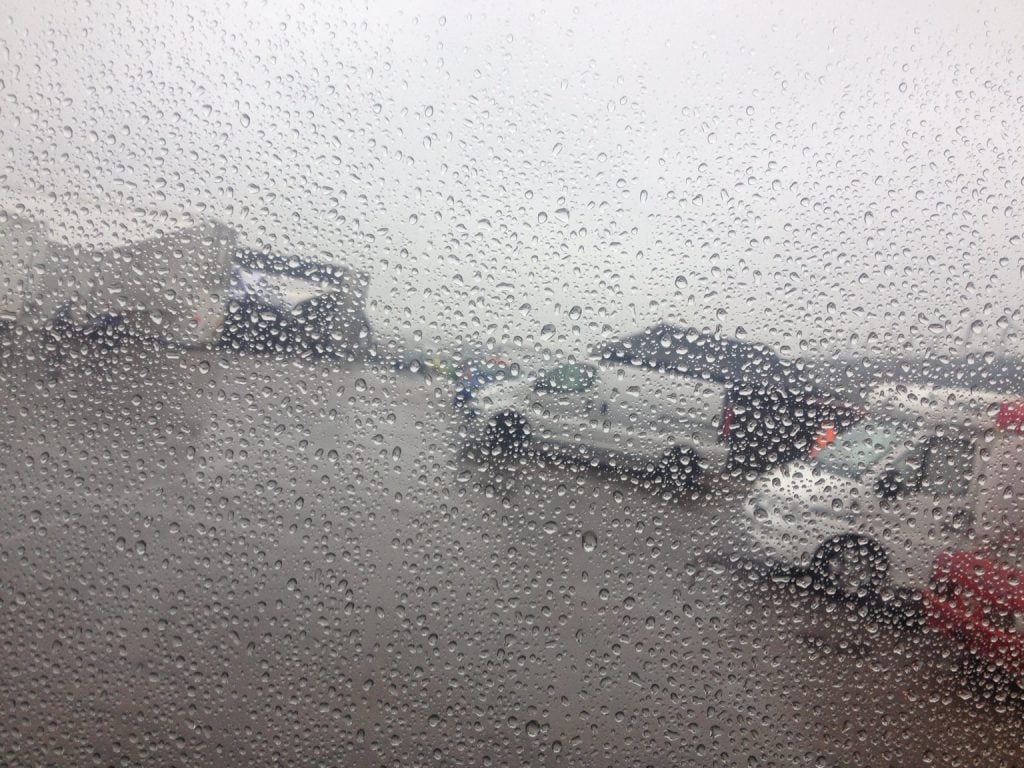 The welcoming view from the van window on the Sunday morning

Those nerves were back as I sat on the grid. Too late for flight so I had to fight. Well, there may have been a tiny amount of “flight” but I won’t dwell on it as the weather meant everything was wet!

Lights out. Go. Go. Go. First corner was looming and I was up to 5th place from 12th thanks to an amazing start.

Imagine looking through frosted glass into a thick fog whilst rubbing soap into your eyes. Well, that was the view I had doing 100MPH into the corner. When you see the on board footage at a Grand Prix race and the commentator says “the drivers really can’t see much”, he is lying, you cannot see ANYTHING. I gritted my teeth and pushed the throttle down harder. “I’m alive” I yelled as I came to the hairpin. The car was going well. The screen completely steamed up but by using the Force I managed to keep going. Then, standing water, aquaplane and off! Thinking quickly about lack of reverse I yanked the handbrake, did a 180 and steamed (literally) back onto the track to fight my way to a finish in 9th. Of course. 5 minutes after the race the sun came out! 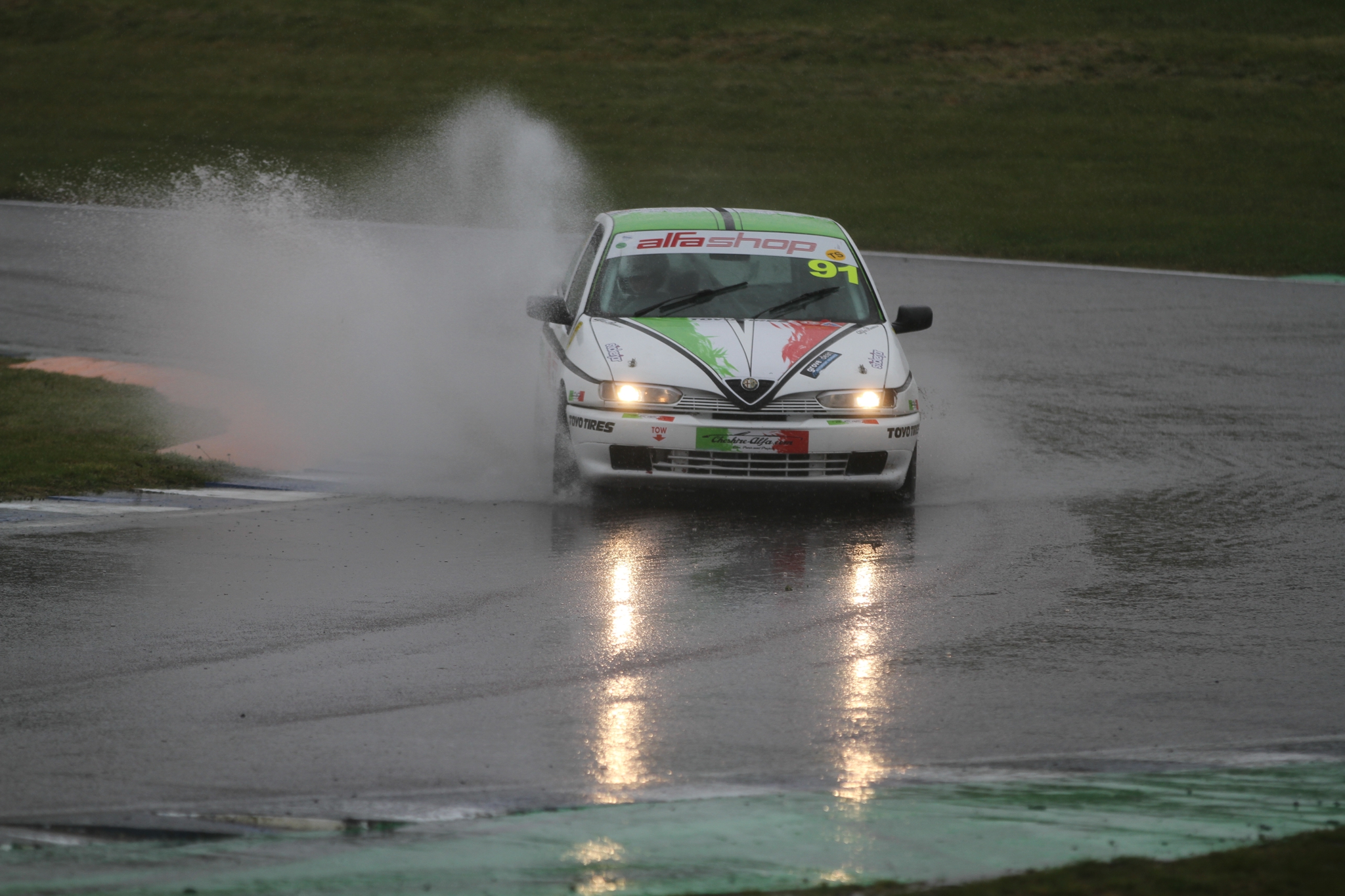 Did I mention it was wet!?

After the return from Rockingham we changed the complete gearbox with one from a breaker I had. All sorted and ready for Oulton Park. My very local track just 2 miles from home. My home track. Got to be good here. Qualifying was OK. I still had some gear issues but managed a solid 6th place and I was determined to make the start count. This was my home track and I wanted a trophy. The trophies for this series are really rather spectacular, hand made affairs that would look good in any cabinet. 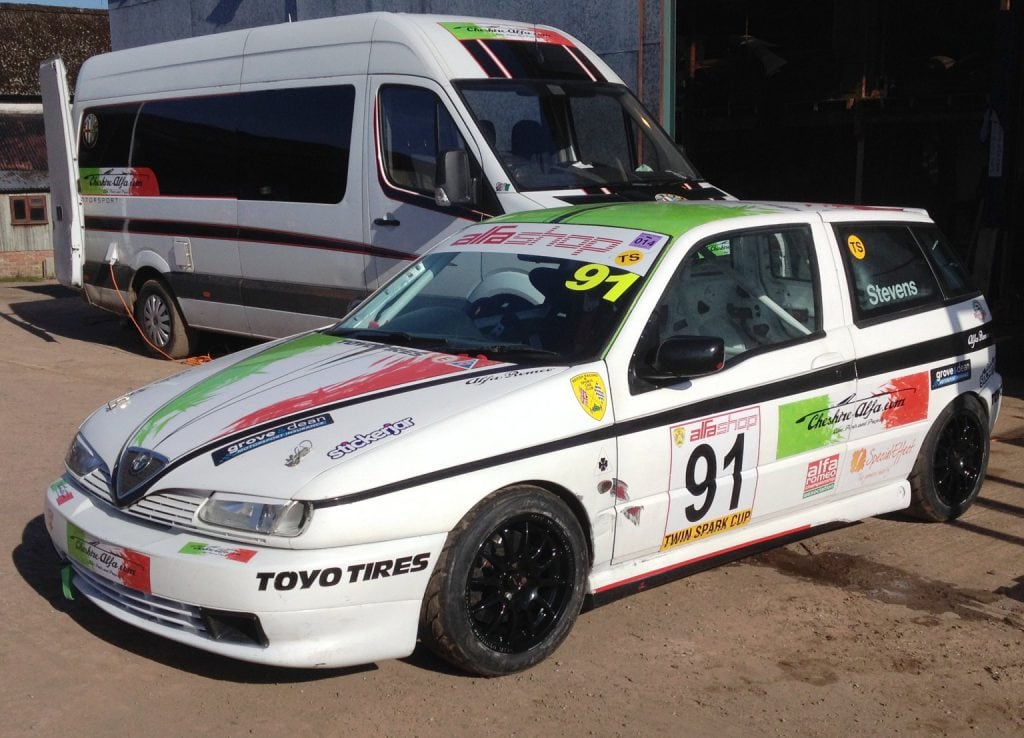 Oulton is a one day event so only one race. This had to count. I lined up in the centre of the grid with clear views ahead of me looking straight through the middle of 5th and 4th places to see where I was going to be by turn 1. 3rd place. Then I would battle for that trophy. Red lights on. Lights off. Gun it. I was a,little slow off the mark but really, that didn’t matter as I tried for 2nd gear. Nothing. No 2nd gear. The rest of the pack passed me as I struggled for that elusive 2nd for what appeared to me to be around a day and a half. Finally it went in just in time for the corner where Simon Cresswell slid wide, over corrected and side swiped another car right in front of me. I gained a little time and two places. Shell Oil corner and a major crash threw two more off into the gravel. Yes! I was making up time. 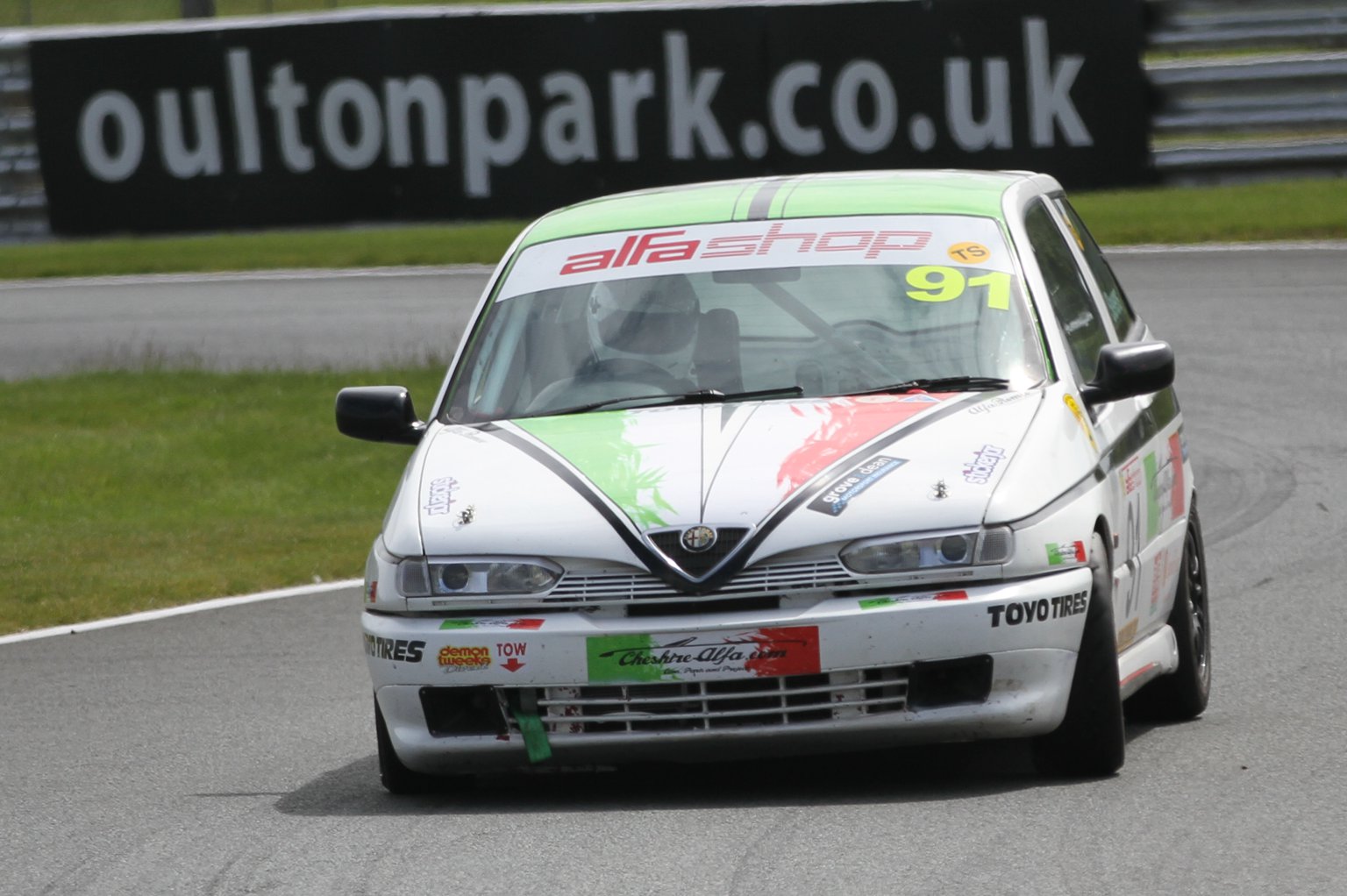 Well, not really. I struggled with the gearbox, cursing and swearing at it for 20 minutes to finish 6th. Out of 7 left on track!! 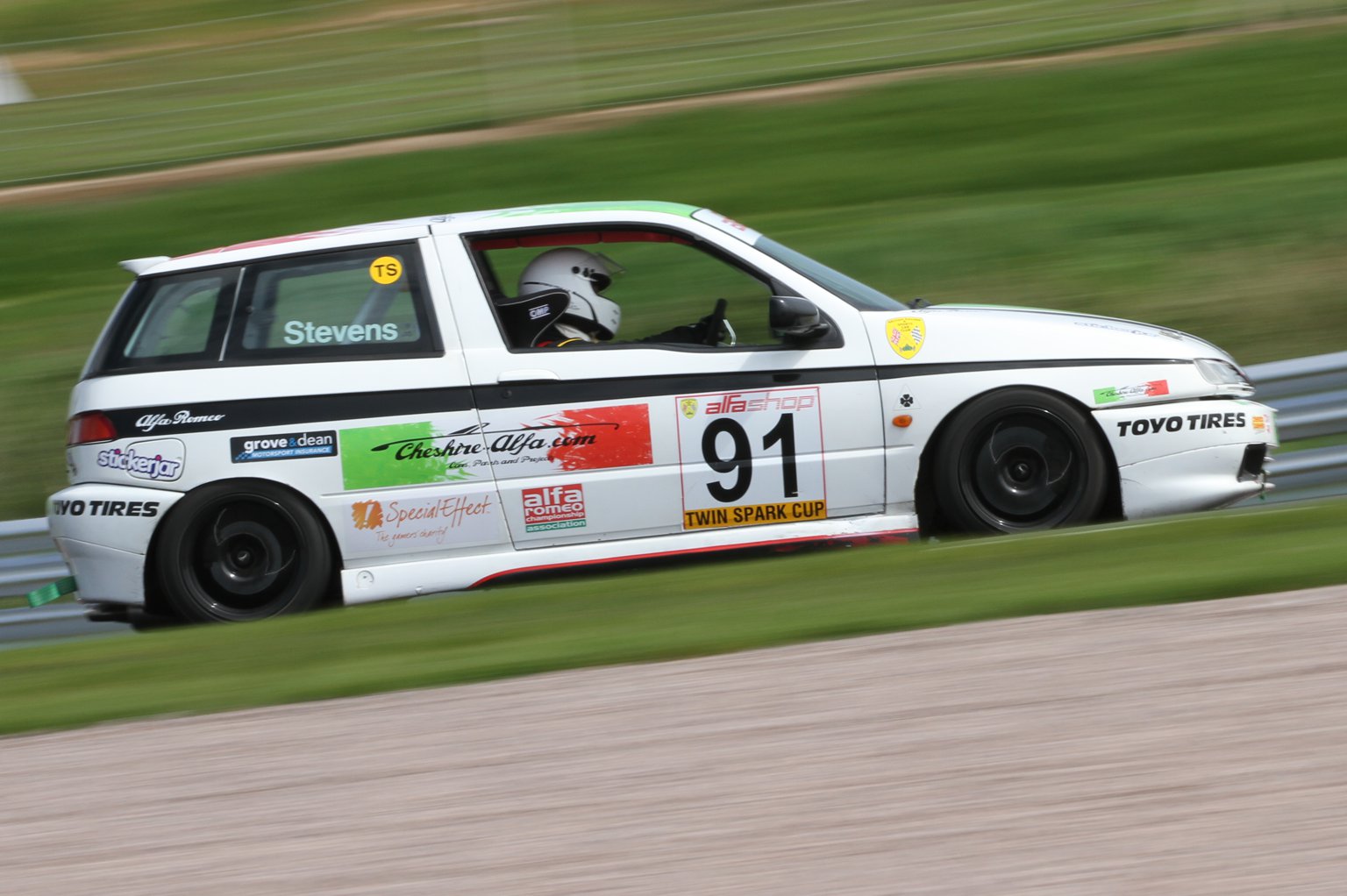 My trophy cabinet would have to stay empty for another month

Since then we have removed the gearbox, fitted a completely new clutch and a phase 2 gearbox with cable linkages. So, as I write it is 17 days before the next race and I cant wait to start filling that cabinet with hand made, well fought and deserved trophies. Roll on Snetterton.

Thanks to Richard for sending us the article. If you’d like to write something similar, please let us know via twitter, facebook or by emailing Matt Daly.