Snetterton is the “home” circuit of our Championship title sponsors ALFASHOP who have been based in Norwich since the company was established in 1982.

It is fitting therefore, that we should have the best entry of the year this coming weekend with qualifying and the first race on Saturday and race 2 on Sunday. It is particularly pleasing that the Power Trophy has come to life, while the Modified class and the Twin Spark Cup have the potential for some very close fought racing once again. 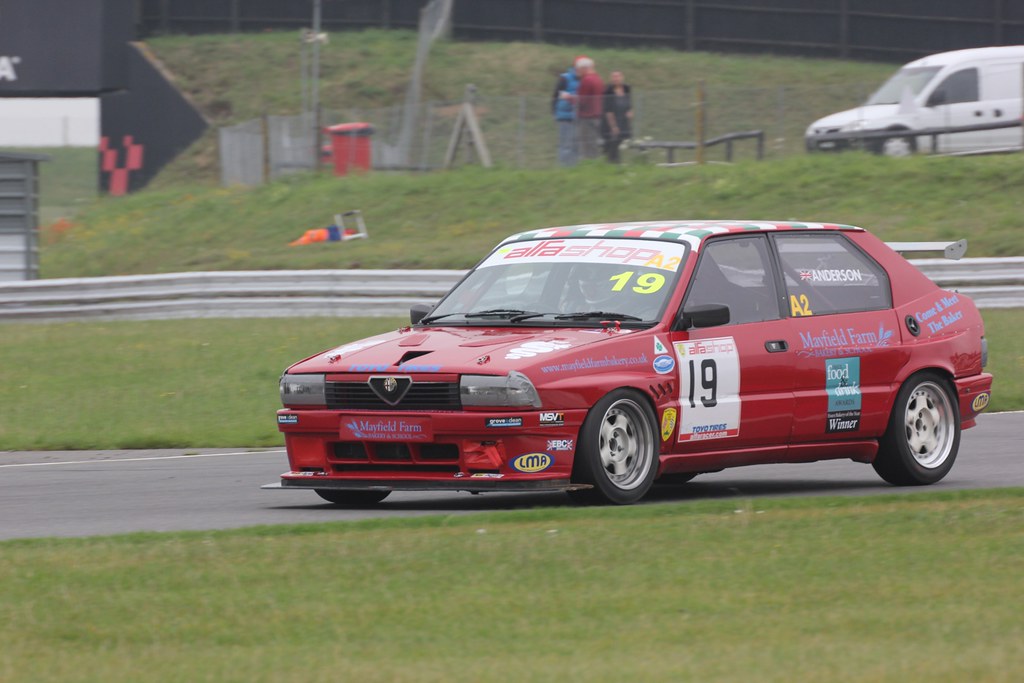 Taking the Power Trophy first – the class has been dominated (well, if you are almost the only entry that would be likely!!) by Ray Foley and his 156 GTA but at Rockingham Nick Anderson did take fastest lap in the dry. However, this shouldn’t detract from the quality of Ray’s performances and at Rockingham it was good enough to secure him a place on the overall podium in very wet and tricky conditions. Having also finished all five races so far, Ray tops the championship points table and with five Power Trophy entries scheduled to run at Snetterton he will have the chance to take a full points tally which would keep him ahead of the opposition. However, Nick Anderson has gone well at Snetterton in the past and will certainly be offering a strong challenge with his much re-worked 33 8v which now has a new engine management system. Keith Waite is making his first appearance of the year with his 75 3 litre and this is also a potential class winner. It will be good to welcome back Ron Davidson who didn’t compete with us last year although he did race his 164 on occasions with the AROC. Ron always fancied getting back to a 164 as he had many good races with his original car back in the 90s before moving to a 155 Q4 and then a GTV (which he still has). Another driver who we shall be happy to see again is Matt Abell. Matt has been working quietly to build up his 33, now with 16v engine, as a Power Trophy car and has visited several meetings this year with Louise West and Nick Anderson. He was a more than capable driver when he raced with us in 2010, winning the old class D from Steve Fletcher, and could create something of a surprise. So, five cars – all different – a 156, two 33s, a 164 and a 75. This is just what the Power Trophy was designed to accommodate. 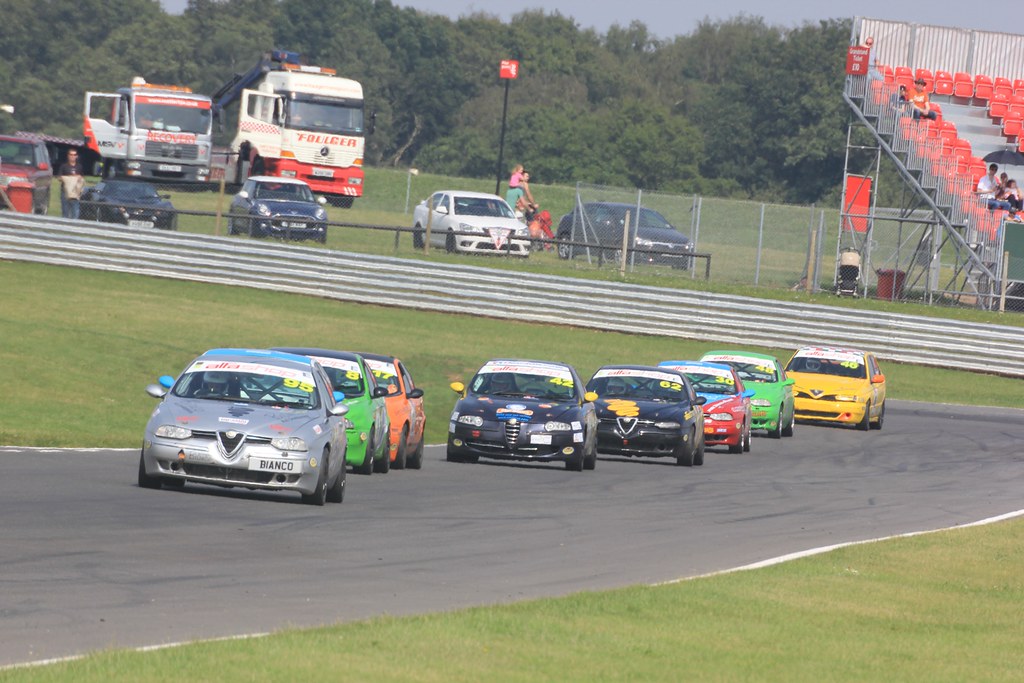 That said, our power to weight ratio class has some way to go to match the ongoing success of the Twin Spark Cup. Once again we have an outstanding entry for Snetterton. James Bishop missed the single header at Oulton and I am sure was expecting to fall behind Tom Hill in the points table but Tom endured the embarrassment of a race-ending first lap accident and came away with the dreaded “nul points”. Star of the day was Paul Plant who took pole, the class win and fastest lap but Paul (at the time of writing anyway) has not entered for Snetterton. Also involved in Tom’s accident was Stephen Potts who, from Old Hall to the braking area for the Shell Hairpin on that first lap (all of 1 mile!) had looked as though he was set for a strong race. Could Snetterton be an opportunity for him to shine? James Bishop will be looking to hold on to the class lead and also overtake Ray Foley overall and there is no reason on current form why he shouldn’t do both. His main rivals will probably be James Ford and Tom Hill. JF is the class lap record holder who JB always reckons is the quicker driver on a good day. His only appearance this year was at the Rockingham double header but neither race there could be put in the “good day” category. Tom Hill will be eager to put his Oulton indiscretion behind him and we know from all his previous performances that it is only a matter of time before a win comes his way. 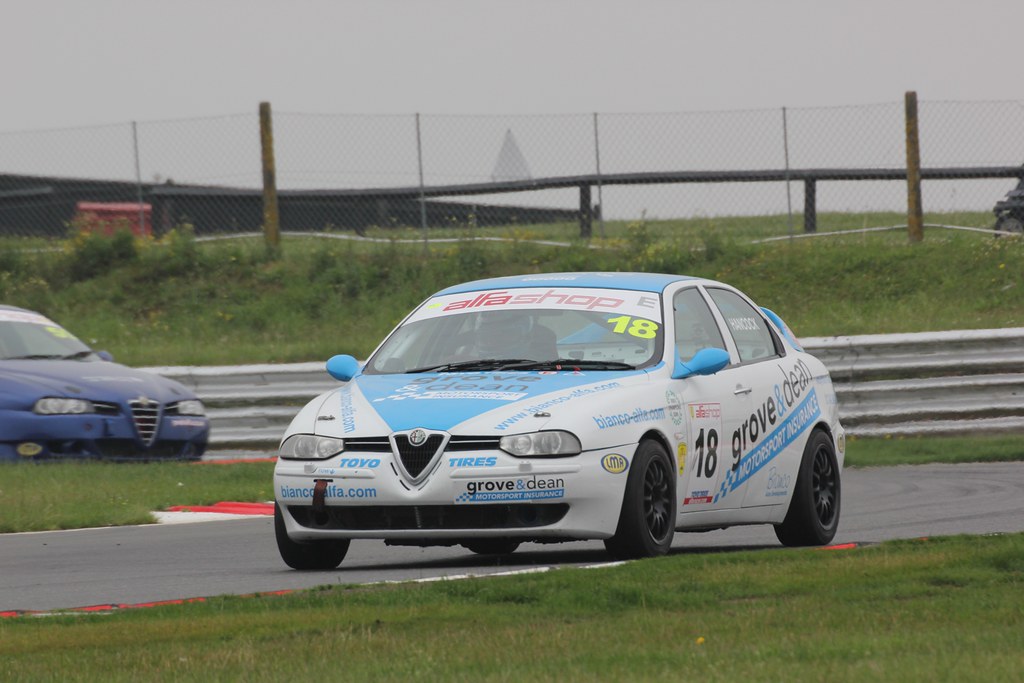 Dave Messenger has had a good start to the season with two well deserved second places and has only been off the podium once in the five races held so far. However, he hasn’t raced at Snetterton on the revised 200 circuit, so he will have a little catching up to do. Andy Hancock, on the other hand, drove an excellent race there last year finishing 2nd. Another who could finish well up in the class is Tim Perry. On his only appearance this year, at Rockingham, he qualified fourth but was a bit impetuous in the races which spoilt his weekend. Probably the quickest newcomer of the year is Simon Cresswell. After some encouraging testing at Oulton, his race day pace disappointed him but elsewhere he has shown himself capable of being regularly in the top six. The second half of the grid should again provide us with some excellent entertainment with the 145 of Richard Stevens and the 147s of Stacey Dennis and James Browning likely to shine. Andy Inman can always spring a surprise or two while Paul Webster and Jeremy Chilton will no doubt enjoy themselves in their efforts to score some points by the end of the weekend. Finally we have Andrew Bourke who now has a Bianco built engine in his GTV and will be hoping to be more on the pace. 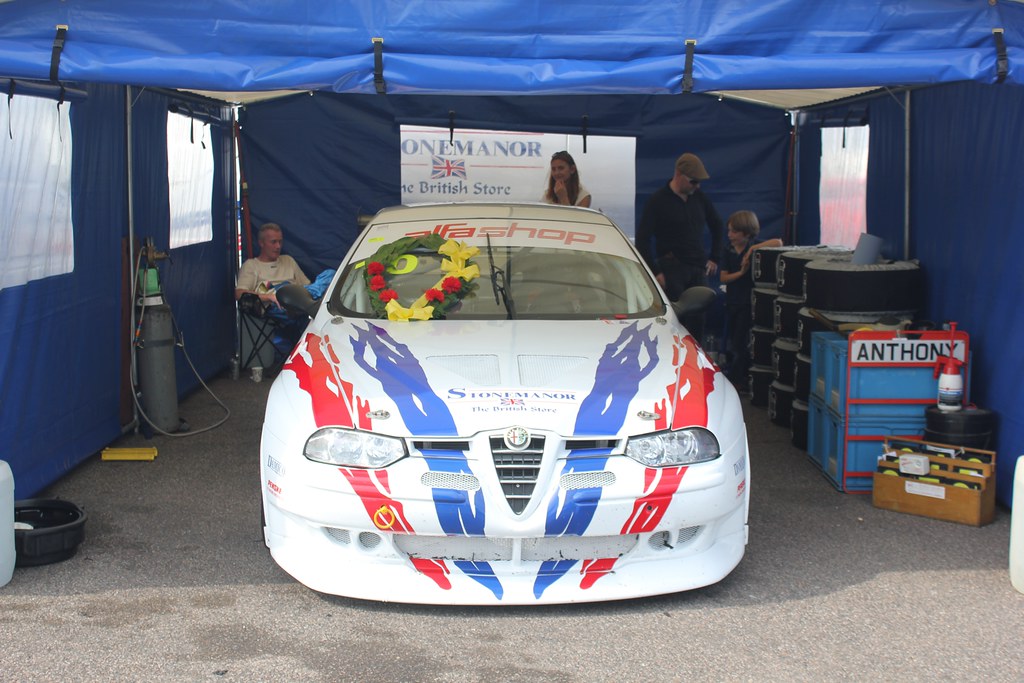 Variety is again in evidence in the five car Modified entry – no light and nimble 33s this time but loads of muscle at the front with three V6s and two 2 litre turbos and yet they are all, in good Alfa championship tradition, to different specifications. Anthony George’s 156 2.0 16v Turbo was the winner at last year’s Snetterton double header and also at Silverstone (and Zandvoort in an Alfa challenge race) but has not yet been seen in 2015. The 156 of Vincent Dubois is also turbocharged but uses the 155 Q4 integrale based engine, Vincent having developed a very competitive package that took a second place behind Roger Evans’ 147 3.8 GTA at Rockingham. Roger enjoyed wins in both races that day but then suffered severe overheating at Oulton which brought about his retirement just after he had been passed by the flying Graham Seager’s supercharged GTV – this, of course, a Peak Alfa built car that Roger previously had raced himself. Graham was unlucky to suffer clutch failure at Snetterton last year but would relish an opportunity to challenge Anthony George. The third 156 in the entry – not with forced induction this time – but with another powerful Peak Alfa built 3.8 24v V6 is that of Andy Robinson. Some sorting out of the handling and brakes by Roger Evans has rendered this car much more user friendly and has allowed Andy to enjoy himself at last, finishing 2nd in his last two outings although admittedly helped a little by the misfortunes of others. But make no mistake the car is quick – you only have to stand on a pit wall to know that! Anthony George probably starts as favourite but judging by lap times set at Rockingham and Oulton, the others will be right on his tail this time.

We hope that the new Barton Mills to Thetford dual carriageway on the A11 will speed up the journey for most people and we look forward to welcoming both competitors and the many Alfa championship supporters that we always see at Snetterton.