As the Alfa Romeo Championship heads to Snetterton for another weekend of exciting racing on the 300 circuit, only 8 drivers are returning this year from the 19 that lined up for last year’s races in mid July, but a further 8 drivers join them, some who are racing for the first time at this historic venue that has played host to many famous drivers and competitions in its 65 years.

2016 champion Tom Hill leads the driver standings on 127 points as we approach the halfway point of this season, having recorded dominant Twin Spark Cup class wins at Silverstone and Cadwell Park, and a narrow victory and a second place at Anglesey. The revamped black and gold 156 coupled with Tom’s obvious talent and growing maturity are proving a difficult combination for the other Twin Spark Cup cars to keep pace with. 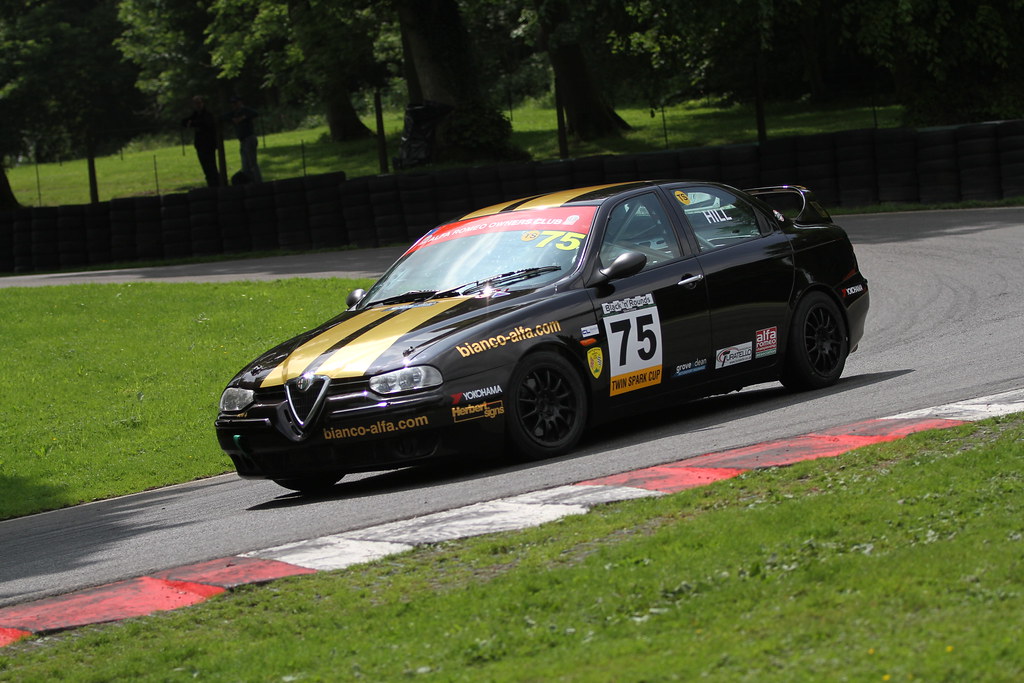 Second in the championship on 120 points in his 3.2 litre 156 GTA is local driver Paul Webster, continuing to impress in the Power Trophy class and consistently picking up strong points finishes to stay in touch. Last time out at Cadwell he did remarkably well to register good results despite missing a number of gears throughout the weekend. That problem has apparently been sorted out for this weekend’s racing. Third overall after a great start to the season is Simon McFie in one of two Fiat Punto Abarths that are also racing in the Power Trophy class. Simon’s nimble and expertly driven Abarth took full advantage of the problems encountered by other drivers at Cadwell to register two outright victories, and is now on 107 points. 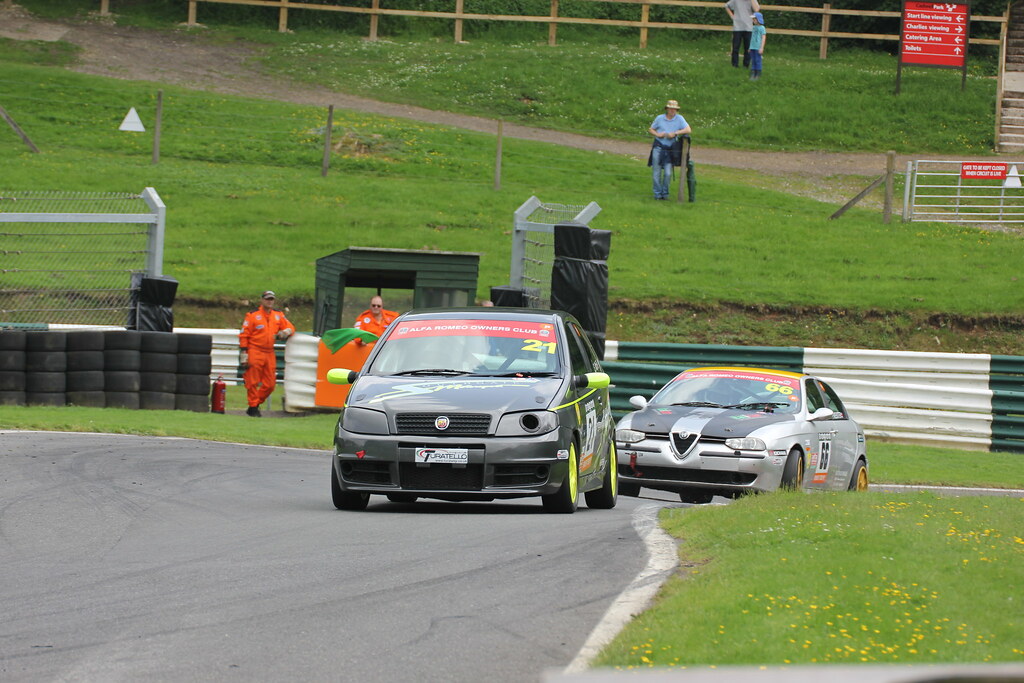 Returning to action in the Modified class for his first outing in the Championship this year is Barry McMahon in his very impressive 156 turbo, which he campaigned in the Britcar championship last year. The car has undergone further development over the winter and is apparently boasting even more horsepower, so Barry and the car are both on form the lap record could well be under threat – no pressure Barry!  Barry is joined by Chris Oxborough in his supercharged Alfa 75 V6 that has seen action already this year at Silverstone and Cadwell. Snetterton is Chris’s home circuit – he registered his first ever outright race victory here in 2016 and is sure to feature strongly again, the 75 relishing Snetterton’s long straights.

Also hoping for overall podium positions are the group of Power Trophy cars: alongside Simon McFie and Paul Webster are regular competitors Chris McFie in the second Punto Abarth and Scott Austin in his 155 3 litre. Chris has experienced a number of mechanical difficulties this year and has also been hampered by one or two incidents with other cars but he undoubtedly has the skill and temperament to overcome these and get back on the winning track. Making a welcome return to the Championship for his first appearance this year is Ray Foley in his immaculately presented 147 GTA. Ray is a former class winner and holder of a number of Power Trophy class records but his car suffered a succession of mechanical setbacks last year. Peak Alfa has moved heaven and earth (almost literally!) to solve the problems and testing has gone well, so we all have everything crossed on Ray’s behalf for a trouble-free and competitive weekend. Welcome back Ray! 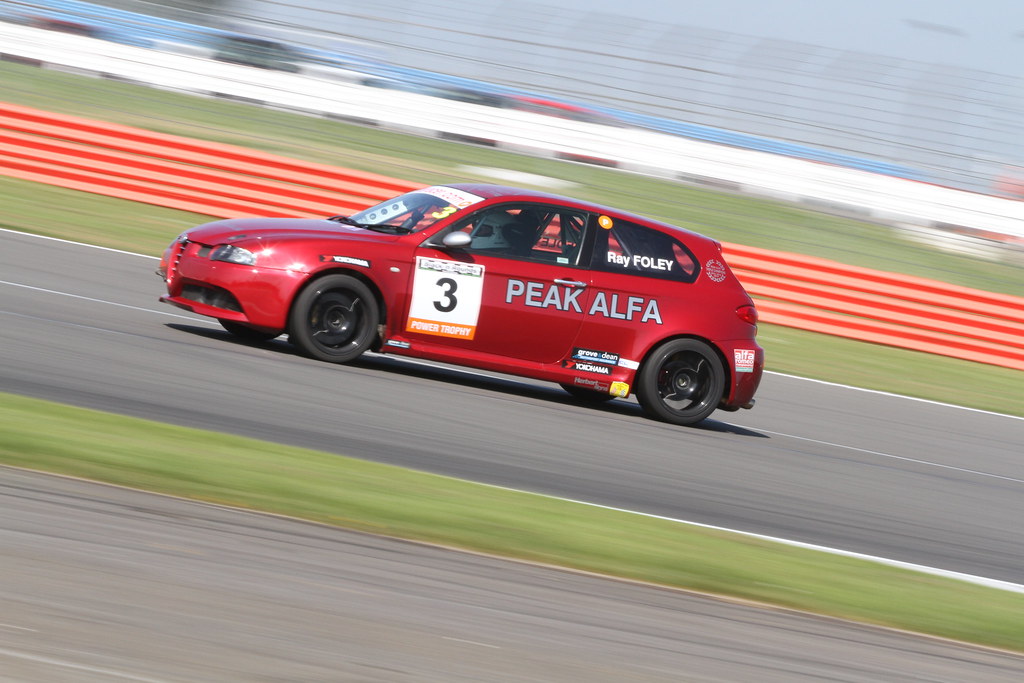 In the Twin Spark Cup class, Tom Hill will be looking to maintain his recent impressive form in his distinctive black and gold 156 supported by Bianco Auto Developments. Richard Ford and Mike Tydeman are close behind him in 4th and 5th positions respectively in the Championship overall and second and third in class. Richard has been going extremely well this year on a limited budget and, notwithstanding one or two minor setbacks, has achieved excellent results earned entirely on merit through results that demonstrate a step change in his performance levels. The same can be said of Mike Tydeman in his 156. However, Mike is sadly missing this weekend due to a serious motorbike crash during a track day at Oulton Park on 20th July. Mike had to be airlifted to Aintree hospital after suffering brake failure at Druids leading to a high speed accident. Mike called it ‘a bit of a spill’ – these motorcyclists are tough as well as crazy – but is now back home recovering and we all wish him a speedy recovery from the multiple fractures he sustained. Get well soon Mike! 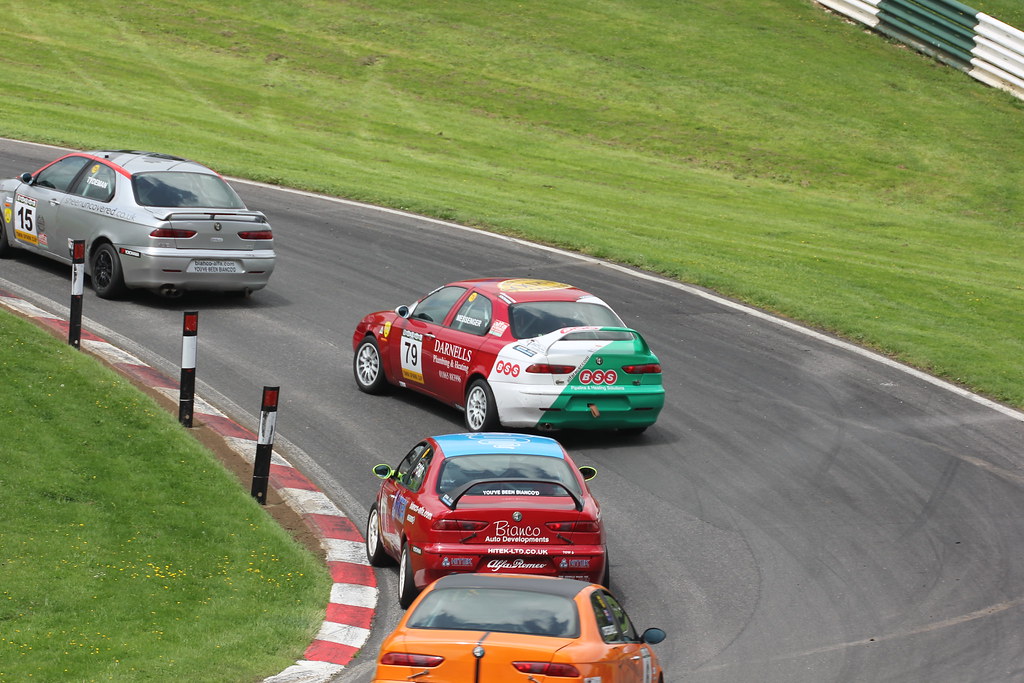 Dave Messenger in his Darnells supported 156 and Shetland Islands driver Kristian Leith, also in a 156, both achieved strong podium finishes in their last outing at Cadwell Park and will be looking to go one better here. Dave is always a strong competitor with his independently prepared car and Kristian is also making excellent progress up the finishing order after a 4-year absence from club racing. Simon Cresswell has so far this year not accumulated points as rapidly as he normally does – having finished 3rd overall in the Championship in 2017- and will be aiming to correct that this weekend. Chris Healey is back on track again in his 156 following his first outing for over 2 years at Cadwell Park in June. 2018 regular Riccardo Losselli returns in his 147 and his race pace is beginning to reflect his extensive technical knowledge of race car technology. Cip Nistorica is back in action in his Turatello trailers-sponsored 156, having had to miss Cadwell due to an important family occasion. Making a welcome return to the grid for his first outing of the year is Nick Anderson in his Alfa Spider, last seen at the Festival Italia meeting at Brands Hatch last year. Nick is an experienced racer – he had some health problems which prevented him from competing earlier in the season so it is absolutely brilliant to have him back in action with us having now been given a clean bill of health. We are also delighted to welcome Stacey Dennis back for her first outing of the season in her distinctive 147 – wonderful to see her back on circuit! 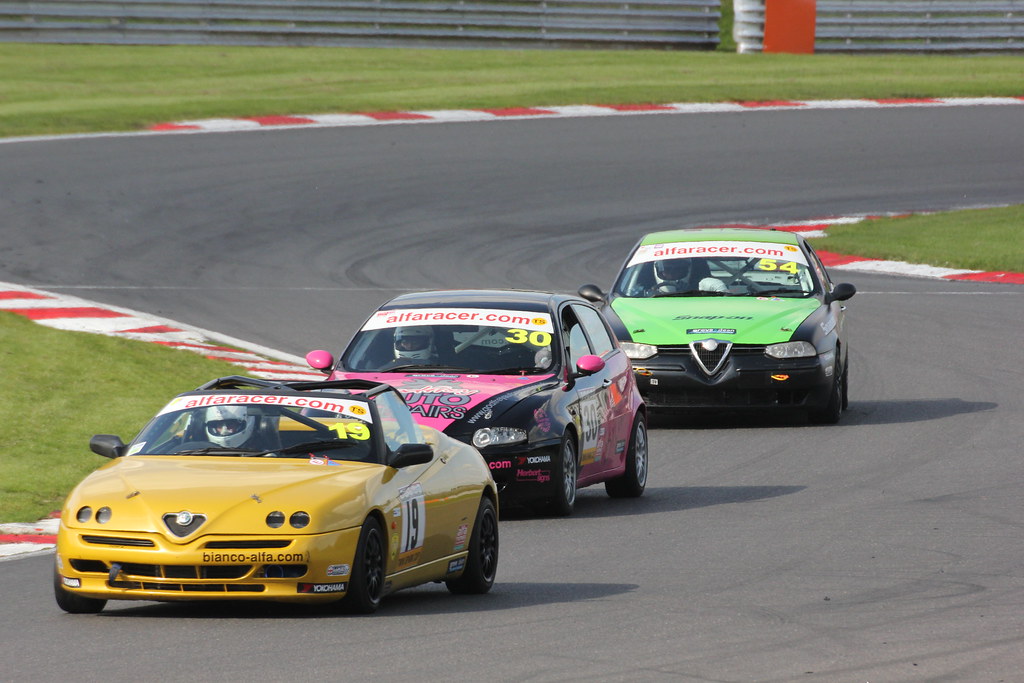 At Snetterton we have been allocated paddock space adjacent to the assembly area which should be more than ample for us. Stephen Green from the BRSCC will again be on hand to help sort out any territorial issues. Stephen has been a welcome addition to the scene at race weekends this year, helping to resolve any ‘territorial’ disputes in a sympathetic but authoritative way. In the past the strong statements about paddock space allocations issued in the final instructions have often been at odds with the free-for-all that developed in reality over the weekend, so we are very grateful for Stephen’s presence.

All paddock areas can be accessed from 18:00 Friday, and those doing Friday testing can access them from 18:00 Thursday.  Tickets must be shown from 16:30 Friday. Trailers are to be moved to the area marked ‘Parking Private Cars’ where there are space restrictions in our area that cannot be managed in other ways.  This area is just outside the inner paddock entrance. Early scrutineering is available on Friday in the Scrutineering Bay 16.00 to 18.00. Our Drivers’ briefing will be held at 9.45 AM on Saturday in the Pit Lane Suite.

We will again be offering free coffee/tea and biscuits (rain permitting) via the good offices of Linda Robinson and others. A great weekend is in prospect – can’t wait to see you all there!