We are making a second visit of the year to the Silverstone National circuit after completing 8 races out of our 16-race Championship programme.

Leading the way at the halfway point is Paul Webster in his Alfa 156 GTA Power Trophy car from 2016 champion and leading Twin Spark Cup runner Tom Hill, with fellow Twin Spark driver Richard Ford in third place. Paul is unable to compete this weekend so the rest of the top ten drivers, most of who are taking part, will be looking to move ahead of Paul or to close the points gap to him before the Championship moves on to the Brands Hatch Festival Italia meeting next month. 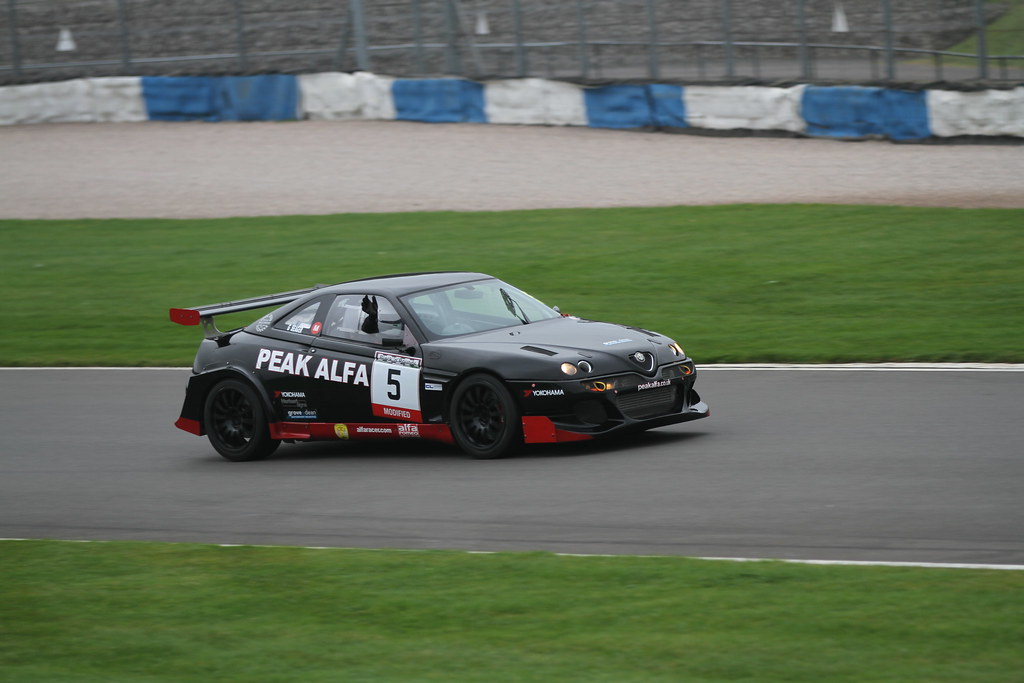 We are delighted to welcome 2015 champion Graham Seager to the entry list once again for his first competitive outing of the year. Graham is in the double championship winning supercharged GTV that also carried Roger Evans to his title in 2012. Expect to see some rapid times from Graham who is the only Modified class entry this time.

In the Power Trophy class, the McFie brothers Simon and Chris will be looking to take advantage of Paul’s absence in their Southgate Motorsport Fiat Abarth Puntos, as will Snetterton overall winner Ray Foley making his second appearance of the year in his smartly turned out Peak Alfa supported 147 GTA. Scott Austin in his black 155 3-litre is making noticeable progress and could well be competing for a podium class position. Returning to the championship after a 4-year absence is former international rally driver Robin Eyre-Maunsell, this weekend driving the Peak Alfa 156 GTA that was raced by Roger Evans at Anglesey earlier this year. The final Power Trophy entry is newcomer Daniel Wood to whom we give a warm welcome. Daniel is driving the distinctive yellow ex Ian Brookfield Alfa 164 3 litre, colloquially known as ‘Old Yella’, a car that is no stranger to the Silverstone circuit. 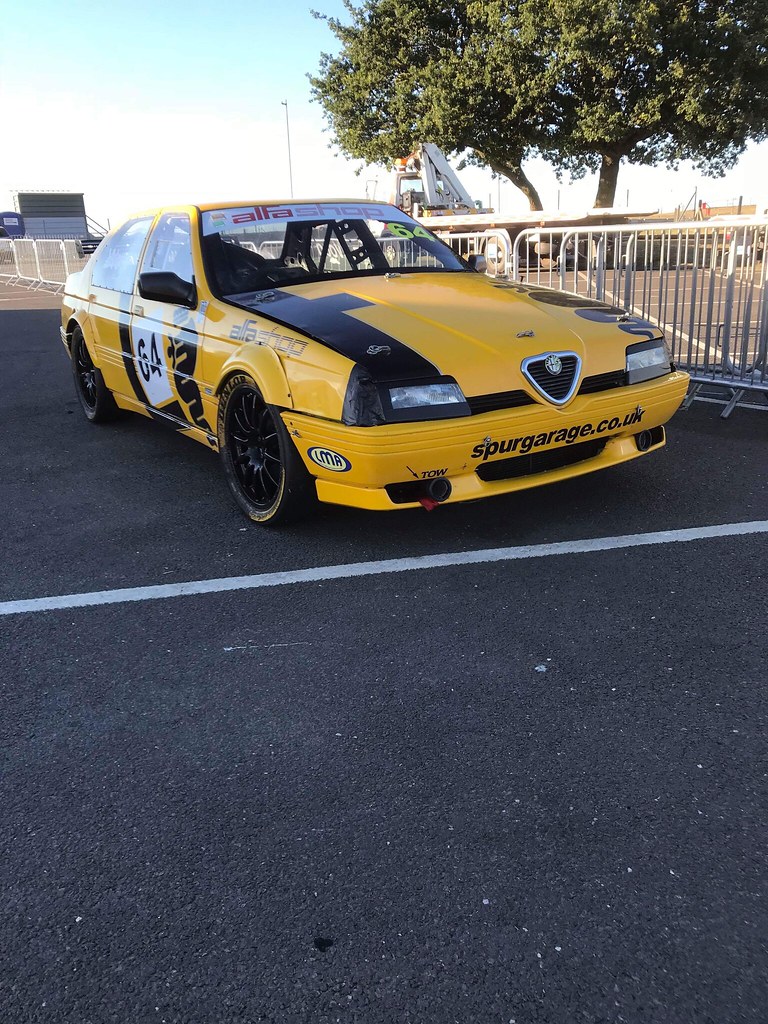 Leading the Twin Spark class and hoping to re-establish a leading position in the Championship this weekend is Tom Hill in his Bianco Auto Developments prepared 156. Tom had a somewhat fraught weekend at Snetterton and will be hoping to re-establish himself at the front of the Twin Spark Cup field. Among those looking to challenge Tom will be Snetterton class winner Richard Ford in his Hitek Electronic Materials 156, double race winner at Snetterton, Dave Messenger in the Darnells supported tricolor liveried 156, Shetland Islands driver Kristian Leith in his Bianco supported 156 and Riccardo Losselli in his 147, fresh from his first Alfa podium position at Snetterton last time out. 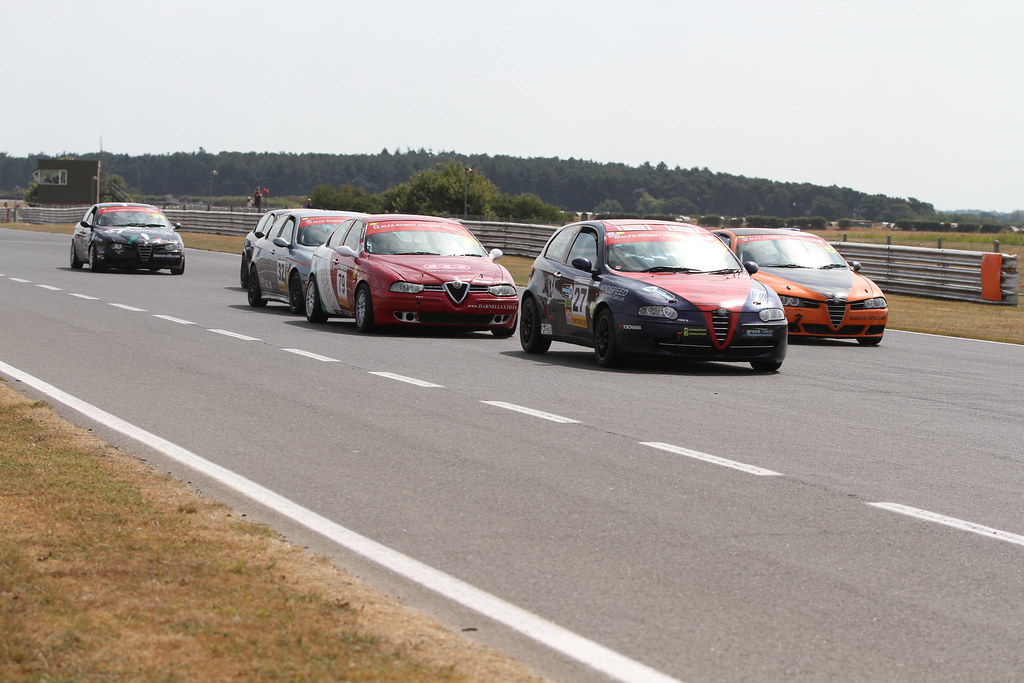 Cip Nistorica is getting to grips with the Turatello trailers sponsored 156 and will be hoping for a strong showing this weekend. Making a return after a few years away from competitive driving is our 2010 Alfa Romeo champion Mel Freeman: it’s great to see her back on track and she will surely be looking forward to being behind the wheel of the 156 she is sharing this year with her father Chris Healey. Championship regular Andy Inman is back in action in the Peak Alfa supported 156 after missing the rounds at Snetterton whilst Nick Anderson makes a welcome return to action for the first time this year with his distinctive yellow Alfa Spider. 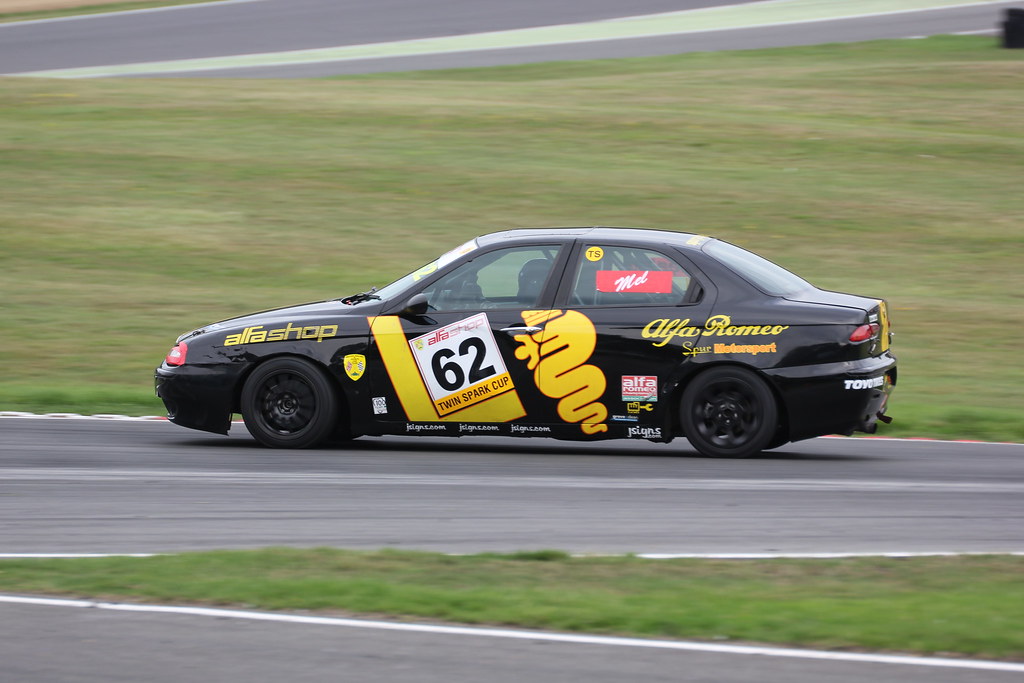 Our Silverstone programme takes place all on Sunday 29th July with an early 7.30 AM start for signing on and scrutineering, qualifying at 9.00, and races at 11.45 and 15.50. It promises to be a very busy and action packed day! We are hoping to have a strong spectator following from the nearby regional groups of the Alfa Romeo Owners’ Club, and the BRSCC has very kindly arranged for them to have their own parking area near to our pit garages. We will make them all welcome and hope they have a great day out with us.

We have been allocated 9 pit garages for the Sunday and the BRSCC will help ensure that the Fun Cup teams have vacated these in good time for us to move in 19.00 to 20.00 on Saturday. The pit garage allocations are as follows:

There may need to be a slight adjustment to this if there any late entries.