Amazingly, a month has already passed since the 2016 Alfa Championship got underway with two closely contested races on the Snetterton 300 circuit.

Overall wins were shared by cars from two different eras and design philosophies – the front wheel drive 147 GTA Cup of Roger McMahon and the rear wheel drive, rear mounted gearbox supercharged 75 of Chris Oxborough. Next Sunday we move on to the Silverstone, using the 1.64 mile National circuit for the first time since April 2013. On that occasion Anthony George dominated both races in his 156 Turbo. Barry McMahon brought home his GTV in second place on a wet track in race 1 ahead of Andy Robinson’s 156 while a dry race 2 saw Andy finish 2nd (in perhaps his best racing weekend so far) ahead of Roger Evans, still getting used to his Class C 147 GTA. We used to deride the National circuit a bit, but after sampling the Wing paddock for a couple of years we shall probably welcome the more open spaces behind the old pits even if the circuit itself doesn’t perhaps offer the same challenge as the International layout that we have raced on recently.

Andy Robinson’s now much developed 156 was at Snetterton but suffered a terminal gearbox problem in qualifying and was a non starter, so he will be hoping for better fortune at Silverstone where he will be joined in the Modified class by two other quick 156s, both turbos but to different specifications. We have seen Barry McMahon’s example which used a 1750 Giulietta engine occasionally over the past four years but it has been plagued by numerous problems – not least of which was an accident at Spa in 2014 that required a major rebuild. Its last outing was at Donington in October where Barry qualified second but suffered a split sump after running over the kerbs at the chicane in race 1. 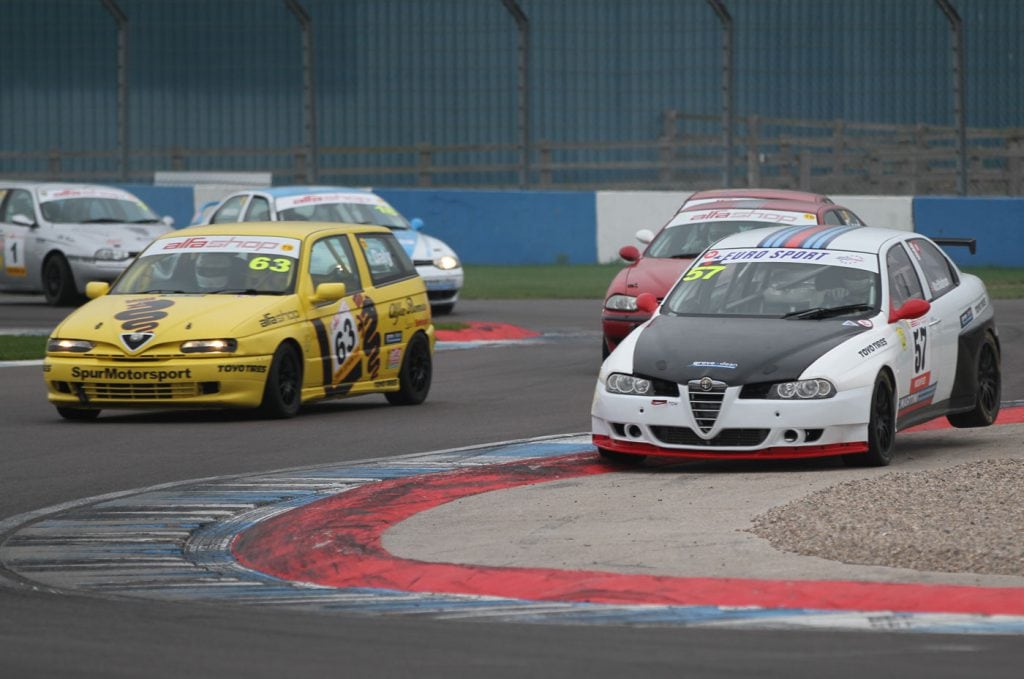 Since then, the car has undergone another rebuild and a colour change. Gone is the Martini livery to be replaced by green and blue. The other 156 is that of Vincent Dubois which has had more success, even if it has yet to put Vincent on the top step of the podium. At Donington he managed to bring it home second, behind Graham Seager’s GTV, Chris Snowdon describing the car as a “rocket ship” after his 75 3 litre was overtaken more than once in a straight line, a considerable speed differential being obvious! However, taming 400 plus bhp and keeping it going in a straight line is Vincent’s immediate task! In this, he may be helped by his latest innovation, a Bacci sequential gearbox which takes advantage of a change in the rules. For those who are not familiar with the engine in this car, it is based on the 16v 2 litre turbo unit from the 155 Q4 that, in itself, was derived from the Lancia Delta Integrale. We had hoped to have another 155 Turbo engined car in the entry – James Nicholls’ 147 – but at the time of writing this had not materialised. 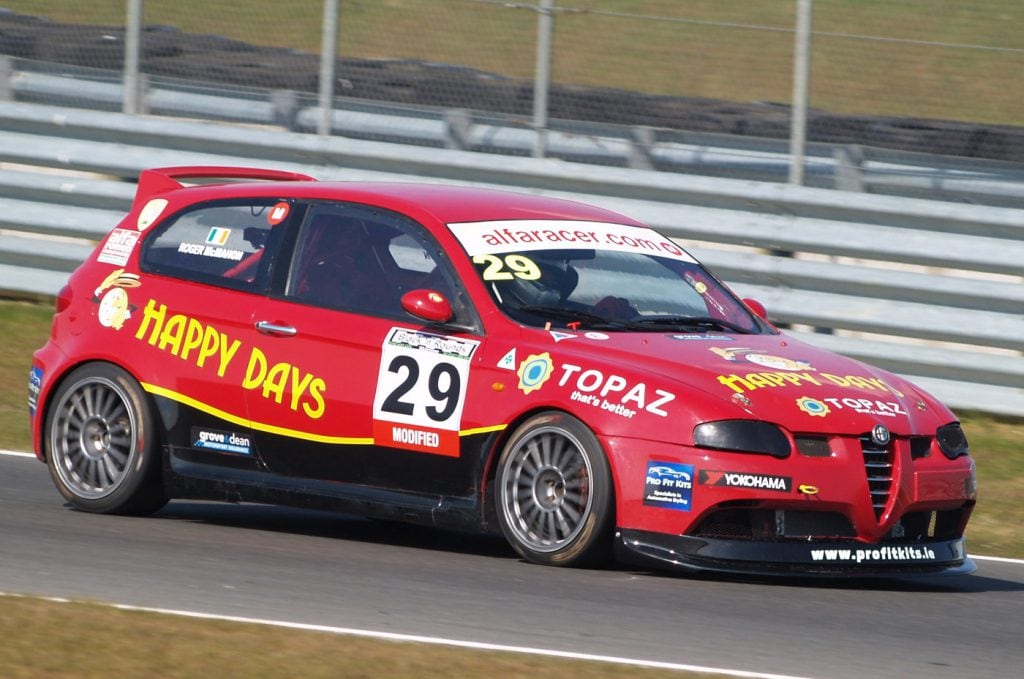 Snetterton winner Roger McMahon raced a Fiat Punto Abarth the last time we were on the Silverstone National circuit but this time he has his “Happy Days” 147 GTA Cup. Although he raced at the front at Snetterton, he was not entirely happy with the performance of the car and will certainly have been working to recover some of the speed we saw at Cadwell and Croft last year. Chris Oxborough’s 75 seems to be quicker than before, helped by new Yokohama tyres, and after his first ever overall win at Snetterton, Chris will be eager to get on the podium again. For those who are wondering why Bryan Shrubb’s entry was withdrawn, he tells me that a lack of opportunity to test the 33 with the new crossply tyres that replace the previous radials, necessitating various set-up changes, is the reason. He hopes to make his first appearance of the year at Castle Combe in July. Another absentee will be 2015 Champion Graham Seager’s GTV as Peak Alfa are still waiting for some parts to complete an engine rebuild.

Only two cars are entered in the Power Trophy – Ray Foley’s ex Roger Evans 147 GTA 3.2 which finished on the overall podium at Snetterton and the 3 litre 164 of Ron Davidson. Ron has a newly rebuilt engine courtesy of Bianco Auto Developments. 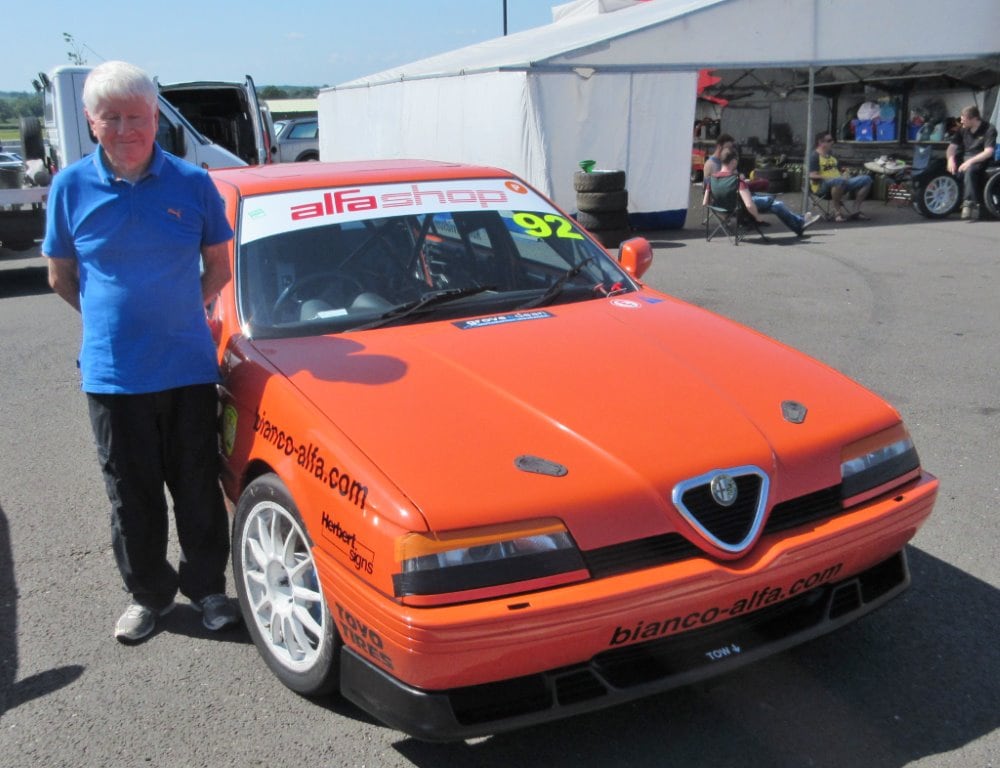 With two race wins, two pole positions and two fastest laps, it was Tom Hill who came away from the opening rounds on top of both the Twin Spark Cup and Overall points tables, fulfilling our pre season expectations. His TSC wins were relatively comfortable, although perhaps his starts could have been better. As usual there were some tight battles behind him although the podiums for both races looked the same. Andy Hancock and Steve Potts enjoyed their best ever race weekends but the most entertaining battles were those between James Browning, Simon Cresswell and Richard Stevens with our only lady driver at present, Stacey Dennis, in close pursuit.

Apart from Steve Potts and Richard Stevens, they will all be in action again at Silverstone plus the returning Dave Messenger. Tom Hill will again start as favourite but Silverstone can throw up some unpredictable results. As this is our first visit to the National circuit for three years there are several drivers who will have to learn the quirks of the place before they begin to make their mark. Further back in the field we shall be watching the progress of several drivers. Andy Inman and Andrew Bourke engaged in a very close battle in race 2 at Snetterton. Andy knows Silverstone well but Andrew showed that the unloved GTV has more potential than we might have expected. Joshua Lambert will be making his first appearance of the year in the 147 that was not far off James Browning’s pace with a similar car at Brands and Donington last year. Another 147 will be that of newcomer Andrew Fulcher. Finally, the Paul Webster’s 156 will be pursuing the ultra reliable example of Jeremy Chilton who suddenly found a chunk of time in the second Snetterton race and the ex James Bishop 156 of Mike Tydeman. 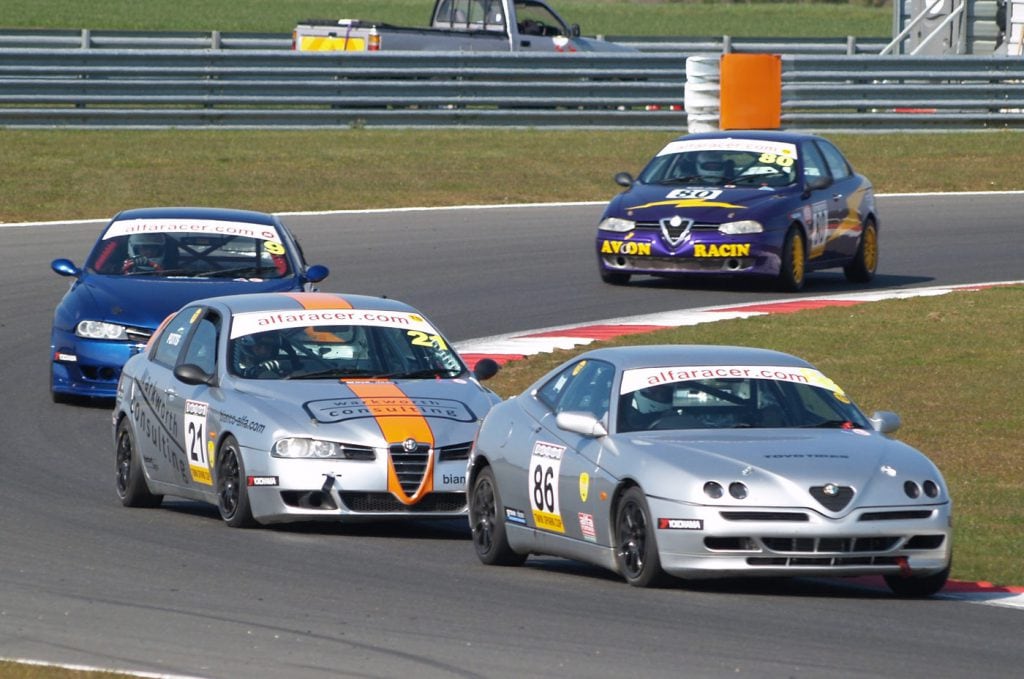 So will Tom Hill leave Silverstone having enhanced his Championship lead? If he has a problem in either of the races, the consistency of Andy Hancock could well pay off while Dave Messenger can never be discounted. Overall, another good weekend for Roger McMahon should boost his chances as he is currently only 6 points behind Tom but he faces some potentially strong Modified opposition.

As at Snetterton, we shall again be using our split grid arrangement, with the Modified and Power Trophy cars going off when the red lights go out, to be followed by the Twin Spark Cup at the drop of the Union flag after a 5 to 10 second delay.

The weather forecast is currently showing a dry and warm weekend (for a change) with temperatures edging towards the mid 20s C. See you there in your T shirts!

NB: Just heard that we shall be in the pit garages nearest to Race Control.

And PS: Congratulations to Max and Andrew Banks on their win in the 1 hour U2TC pre 1966 under 2 litre Touring Car event at the Donington Historic Festival last weekend with their Giulia Sprint. They beat the Neil Brown / Richard Dutton Lotus Cortina by a clear 10”, not to mention the rest of the strong 25 car field.