Last weekend 12 UK Alfaracer drivers ventured over to the legendary circuit of Spa Francorchamps to compete in the final rounds of the Alfa Romeo Challenge and Scuderia Alfa Classico. With a Multi class structure our drivers fitted in perfectly including 7 in the Twin Spark Cup class. 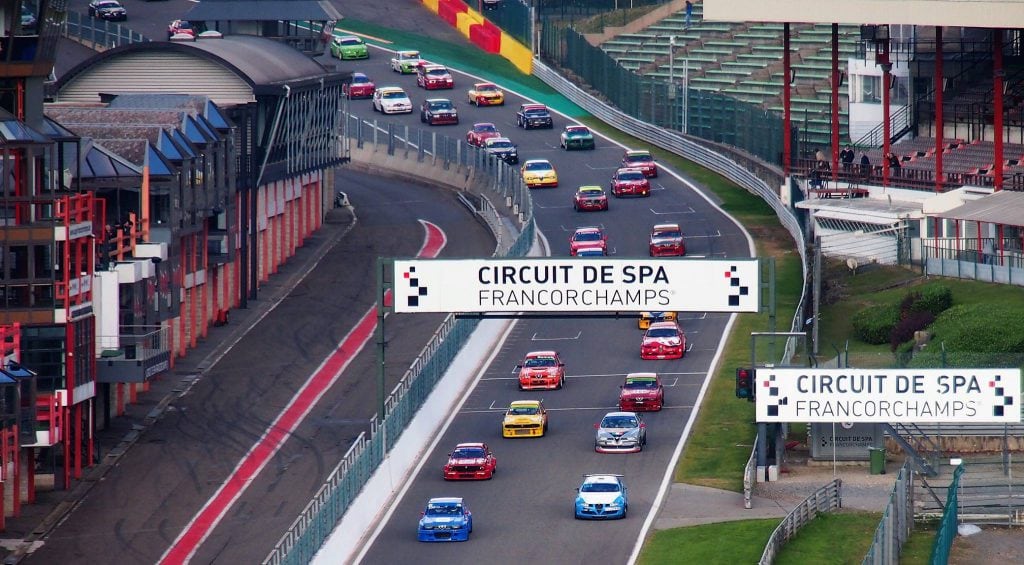 Travelling for some was a luxury being on the Friday morning whilst others such as Roger McMahon and Alastair Kellett had to set off on the Tuesday to meet up with Bianco who set off on the Wednesday. The drivers from the UK where as mentioned Roger and Alastiar, in their 156 v6 and 147. Timothy Perry in a 156 V6 Power Trophy car, John Symes in the Alfasud he shares with Gary Walker of which we last saw Graham Heels racing at Snetterton in 2012. This then left us with the Twin Spark cup drivers including 2016 champion Tom Hill (156), Nick Anderson (916 Spider), Jeremy Chilton (156), Mike Tydeman (156), Andy Hancock (156), Simon Cresswell (156) Paul Plant (147) and John Griffiths (147). It was also great to see Ray Foley and Heather Green who had travelled across for a weekend away but unfortunately with no 147 race car.

On arrival there was another rare Luxury – Paddock space. With 2 Major Series having withdrawn from the event there was more than enough space for the 70 Alfa Romeo’s to set up. On the Friday there were test sessions available of which several of our drivers made the most of to familiarise themselves with their new cars or new circuit.

On the Saturday there was to be 2 Qualifying sessions. The quickest time of the 2 determined your start position for race 1 with your finish position in race 1 being your starting position in race 2. Qualifying 1 started off wet with 58 cars eventually completing the session. As the session progressed the rain stopped and the circuit, although incredibly slippery was becoming more consistent and the lap times where falling until the very last lap. Once completed there was a surprising pole position for Roger McMahon after snatching P1 by 0.051 of a second on his last lap with a time of 3:10.430.

Alastair Kellett qualified 20th with a time of 3:26.426 which was his first lap but unfortunately had to stop on lap 2 with a burst coolant pipe which would end any further involvement for the weekend. Tim Perry found that the old wets he had where no good at all and struggled with the car qualifying 26th with a 3:29.568. The last of the modified runners was John Symes who was running on the 14 inch variation of the Yokohama Twin Spark Cup tyres and qualified 40th with a time of 3:45.818.

Qualifying 2 had dried up but there where a few spits of rain in the air so everyone was hoping it stayed dry. It would also give a good indication of the pace of the UK cars compared to the European cars and also the difference between the cars on slicks and the TS Cup on the usual control tyre.

For most it took the whole session to get the lap times down to their best. Roger Couldn’t quite match his heroics of a P1 again but this time finished in P4 overall and P4 in Class with a 2:51.263. This was Roger’s first time driving the car properly since its build so he was understandably over the moon to be on row 2 considering the very serious machinery around him. With Alastair sitting out the rest of the weekend the second Modified car of Timothy Perry found things to be much better but was struggling with rear end grip from the Dunlop slicks he was running but he too set his fastest lap on his last try with a 3:07.640 leaving him 36th and 10th in Class. Lastly John Symes in the Sud finished up in 55th position with a 3:28.640 also completing his best on his 5th lap of 5. 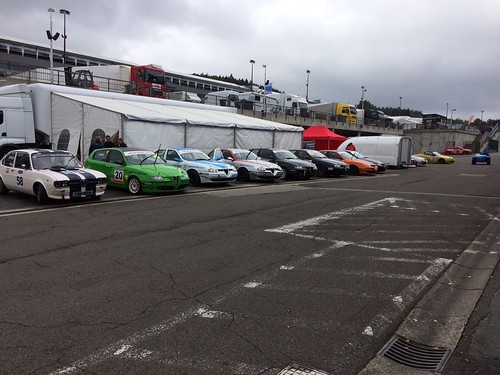 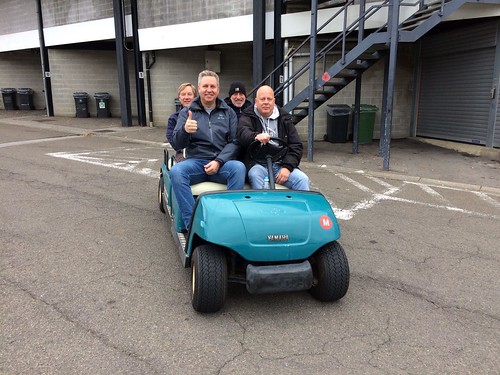 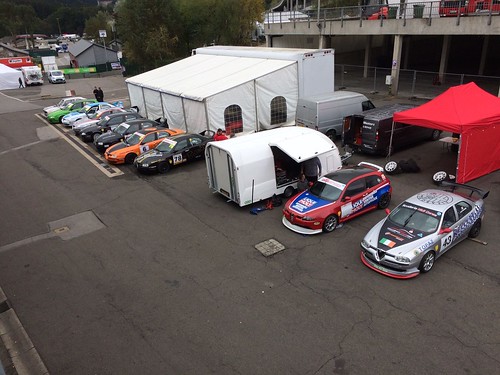 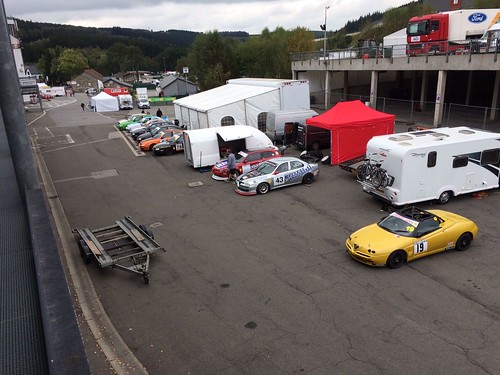 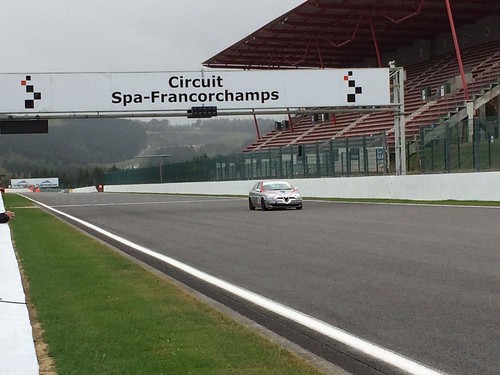 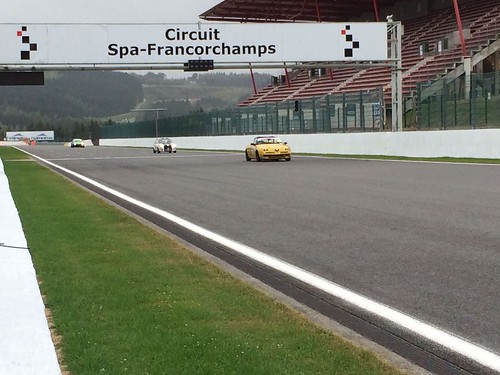 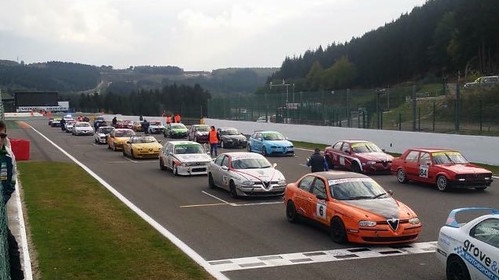 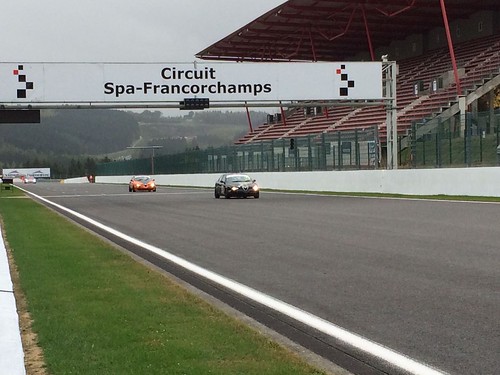 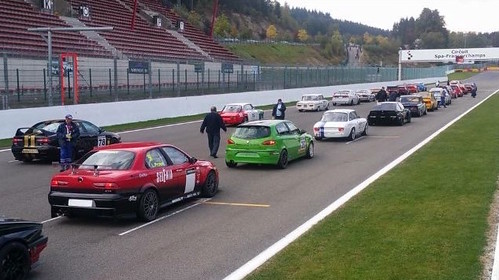 The next day the weather was settled but chilly. As the bell rang the drivers then made there way to the assembly area. With 59 cars all heading there at the same time the stewards decided that it was too overwhelming to try and organise the cars into some kind of starting order so left it for the start officials on the start line. The cars left to complete the formation lap with many trying to find the rough position of where they should have been starting. As the cars gridded up it quickly became apparent that the message hadn’t been passed on from the assembly area to the start officials who after completing the first few rows through their hands up in the air and gridded every one where they where. This benefitted some greatly especially the lucky Timothy Perry who was gridded inside the top 25 but then others who would be fighting their way back up through the field. In Europe they utilise a rolling start which was a new concept to many of our drivers however, the start went smoothly and the gridding up as the cars arrived at the bus stop chicane made for a fantastic photo opportunity with the 2 rows of cars nicely lined up. 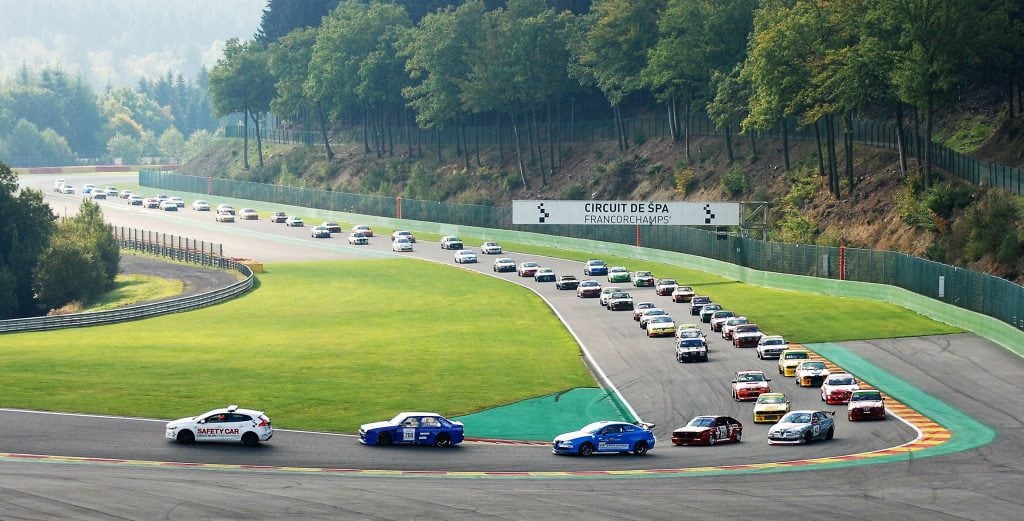 The race really highlighted the difference in performance between the cars with one driver in Parc Ferme commenting on how he doesn’t understand how the English make our cars go so fast especially the Twin Spark Cup cars!

The race wasn’t without incident though of which one of them involved Timothy Perry. He had a coming together at La Source hairpin getting hit from behind sending him in to a spin with broken suspension that would end his race. Paul Plant had bent suspension and Roger McMahon had a technical fault however he was classified as the race was red-flagged before the end due to a 33 colliding heavily with the barriers. The result ended with Roger still being the highest UK finisher in 13th and improving on his lap time from qualifying with a 2:50.479. Next up was Paul Plant in 23rd and Tom Hill only 3 seconds behind in 24th. Tom Managed to break the 3:06 barrier with a 3:05.324 some 7 tenths faster than Paul. Andy Hancock finished where he started which was 3rd in class but had climbed up to 31st overall. Simon maintained his 4th in class climbing to 33rd with Mike Tydeman also climbing to 35th. Next in line was a very happy Nick Anderson who had got the jump on both John Griffiths and Jeremy Chilton who all finished in 39th, 40th and 44th respectively. John Symes had an uneventful race finishing in 43rd place. 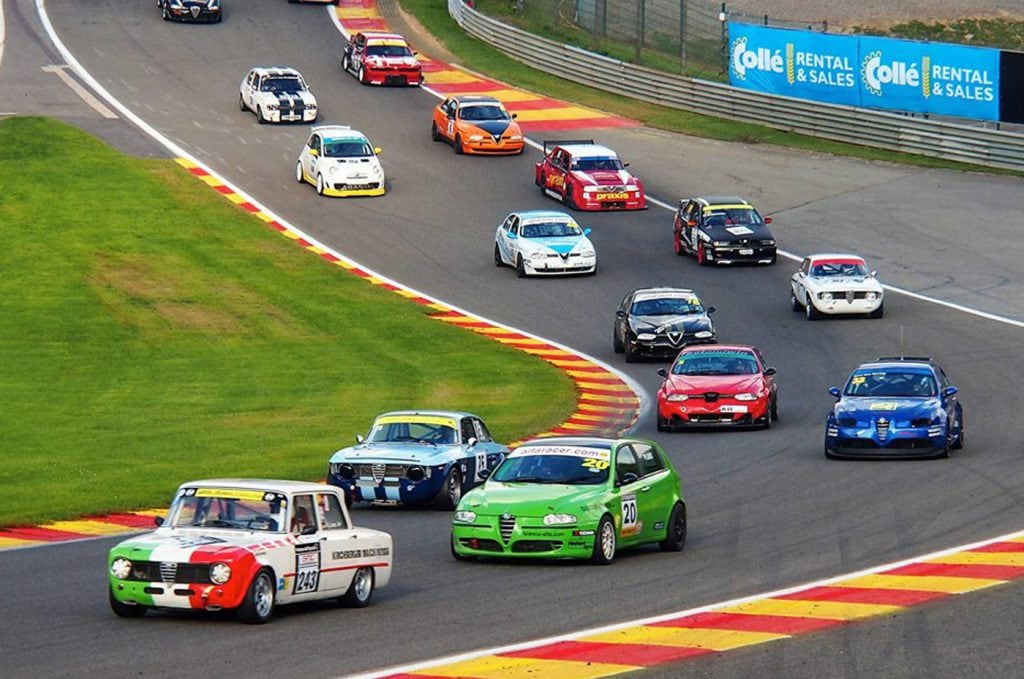 With repairs having taken place to Timothy’s car, Paul’s car and a new Air Flow meter fitted in Andy’s car everyone was all set for race 2. The organisation this time was a little better but still seemed to be a free for all with everyone trying to get near the front despite any starting position they where supposed to have. Roger McMahon had a great race once again improving his lap time to a  2:49.335, his best of the weekend. He ran 3rd for a lot of the race but was in a close battle with his rivals. On the last lap coming out of the Bus stop chicane for the final drag to the flag he missed a gear and then had trouble finding it again so ended up crossing the line 5th in class and 7th overall. Timothy Perry had a fantastic recovery drive from the back of the grid. He climbed up to 28th knocking a big chunk off his personal best with a 3:03.430 to end the weekend on a high. John Symes had climbed up to 43rd overall. 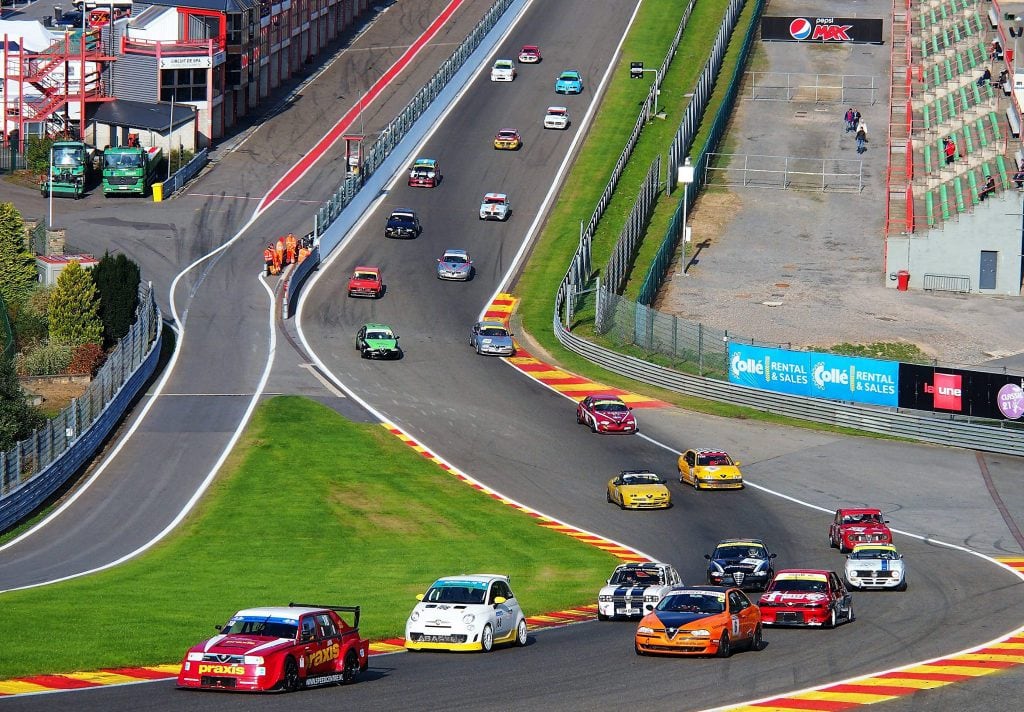 In the Twin Spark Cup Paul was leading until 1 lap from the end where a drive shaft failure led to his retirement just before taking the last lap board. Paul took fastest lap and broke the 3:05 barrier with a 3:04.087. Tom inherited the lead and stayed there to take his first European class win with a best lap of 3:04.556 and finishing 21st overall. Next up was a superb performance by Mike Tydeman. This was easily his best result since his return to car racing taking P2 with a best Lap time of 3:07.442. This was a significant improvement over any session previously. It also matched Andy who was P3 with an identical lap time also on the same final lap!! Simon came home a lonely 4th and 31st overall. John Griffiths finished 5th and 37th overall also setting a new best lap time of 3:18.709 ahead of Jeremy Chilton and Nick Anderson. Nick having run out of fuel on the last lap had to get recovered back to the pits.

It was a great weekend with some great racing at arguably the best circuit in the world. All of our drivers are always made to feel incredibly welcome and we would like to thank our friends in the Alfa Romeo Challenge as well as the Scuderia Alfa Classico. For a more detailed list of results click here.

With all the drivers thoroughly enjoying themselves, there was a lot of talk as to if there will be a UK round at Spa in 2017…………..