Drivers generally like it whereas teams, supporters and families are less enthusiastic because of the distances involved if you have to walk anywhere. Having said that, the view from the huge grandstands is impressive and unlike most other venues it is possible to see almost the whole track from one place. If you are keen photographer the vantage points are limited but over the years many holes have been punched in the catch fencing at places like the Tarzan Hairpin and the pits roof is panning heaven! 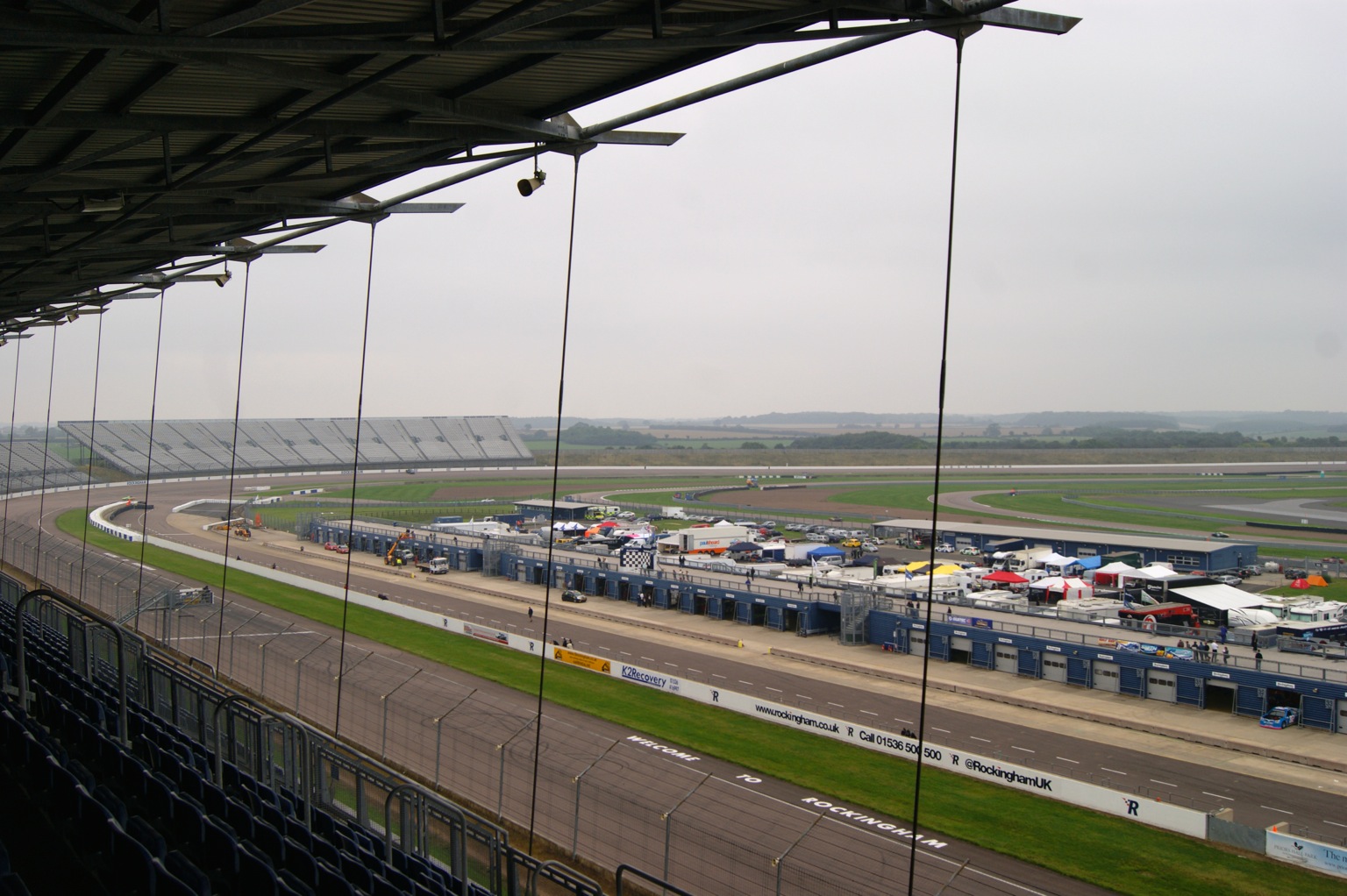 The opening rounds of this year’s Championship took place on the Silverstone International circuit on Easter Monday and we were able to enjoy some lively racing in both the Modified class and the Twin Spark Cup. Graham Seager (GTV 3.2) and James Bishop (156) were double winners but both had to work hard for their success, in particular James who showed just why he was overall champion in 2014 and could well repeat the feat this year. However, Rockingham may give us a better indication of the challenge that he faces as James Ford will be having his first races of the year, having missed Silverstone, while Tom Hill will give his newly built 156 its debut run. Those who remember Dave Messenger’s chase of Neil Smith’s 147 in 2012 will also be watching his 156 closely this time, particularly after two podium finishes at Silverstone. 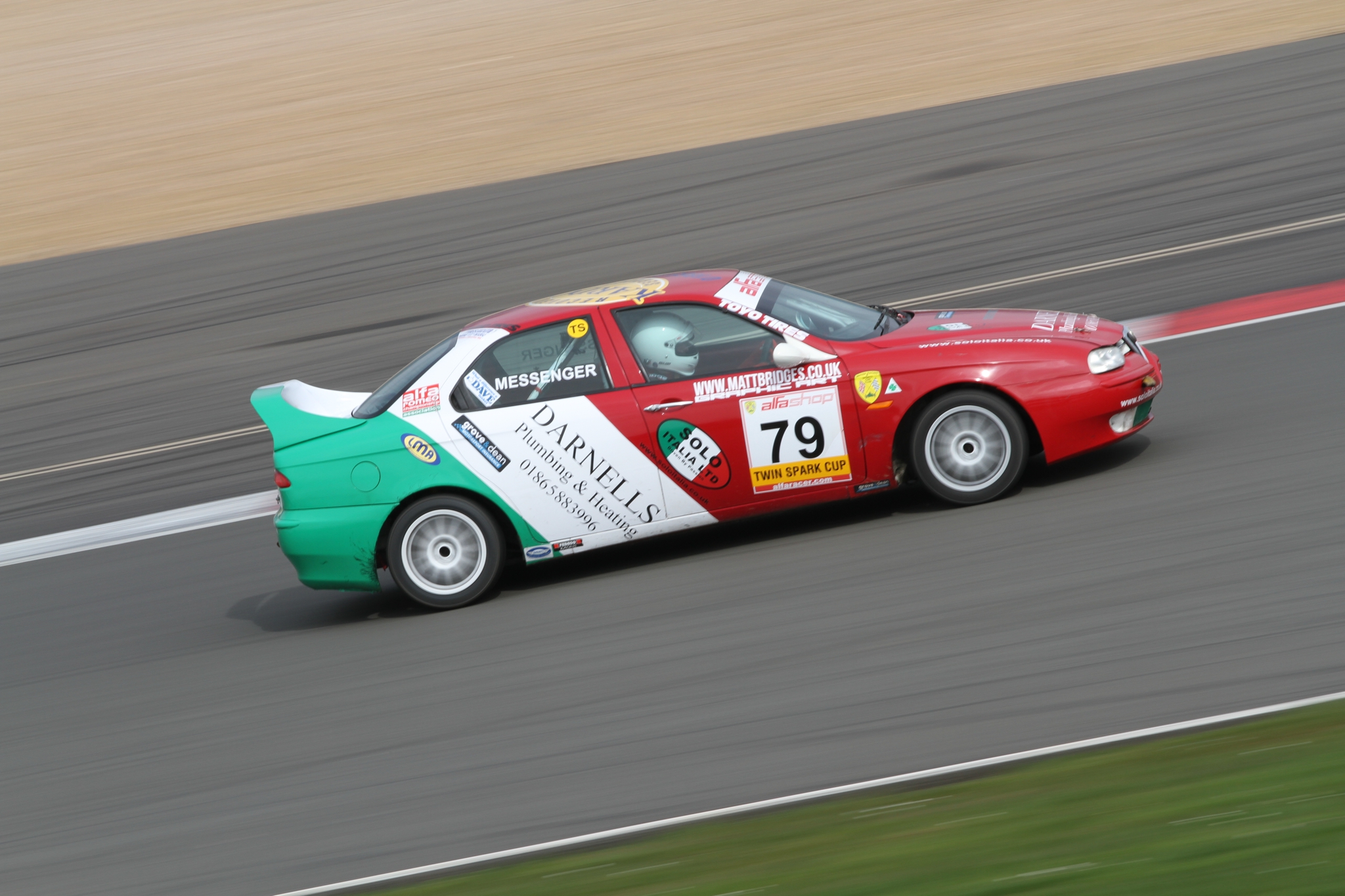 So who else could shine in the Twin Spark Cup? There were determined drives by both Jon Billingsley and Andy Hancock in the opening rounds. Andy had lived up to the prediction I made in the Season Preview by narrowly taking pole from Dave Messenger. However, he also demonstrated how an excellent start to the weekend could quickly disappear as sadly he was unable to make it work at the start of race 1 with excessive wheelspin which dropped him back to fourth at the end of the first lap. After that he secured a hard fought and satisfying fourth place finish but this meant that for race 2 he was on the second row of the grid and lost out to Paul Plant and Jon Billingsley this time, leaving him a disappointed 6th. 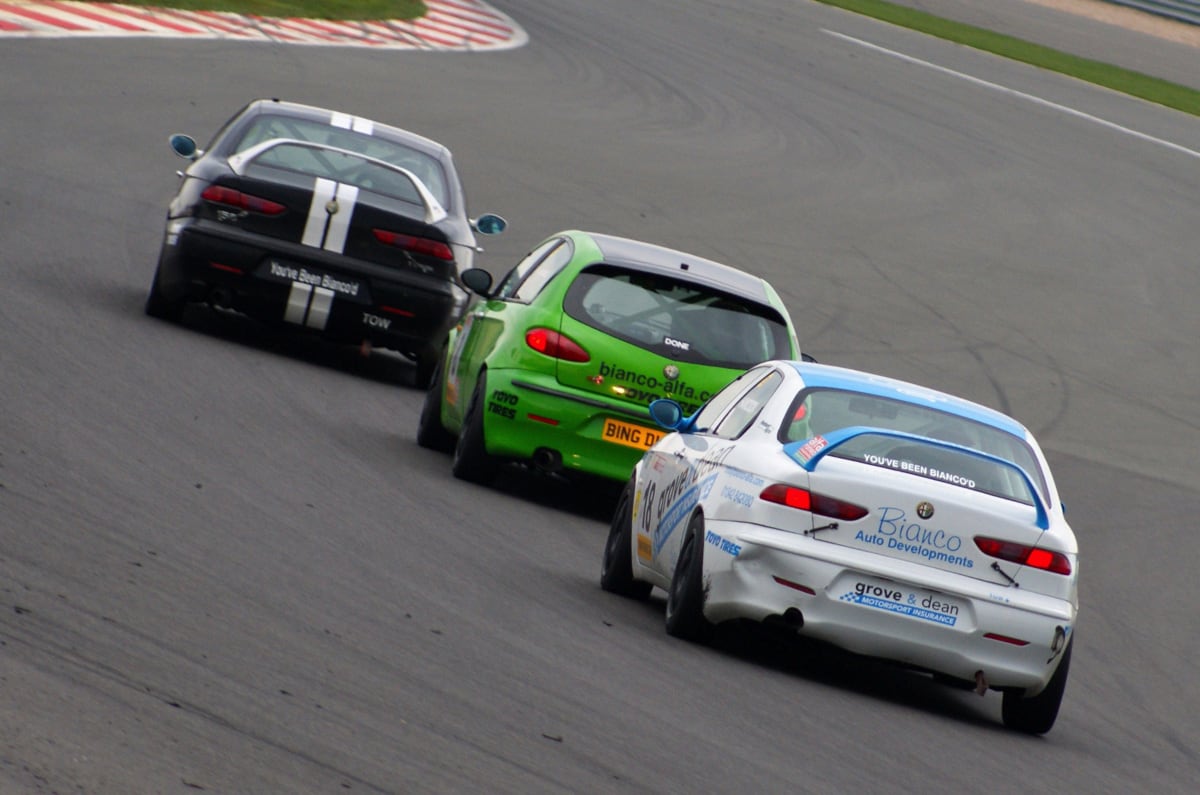 At Rockingham last year, Andy’s best finish was 4th after qualifying 3rd, so another good result is on the cards. Jon Billingsley managed to get himself into 2nd place briefly in race 2 at Silverstone but never gave up in his battles with Paul Plant and Andy Hancock. He was on the podium at Rockingham in 2014 and could well be up there again, particularly if he qualifies better. Like James Ford, Stephen Potts is making his first appearance of the year, now in a 156 rather than his previous 147. We know that Stephen is quick – his pole position at Anglesey last year showed that – but he has to show consistency in races to succeed against the opposition now facing him. Elsewhere, Russell Anderson (146), Stacey Dennis (147) and Luther Blissett (156) will undoubtedly give us some more entertainment. 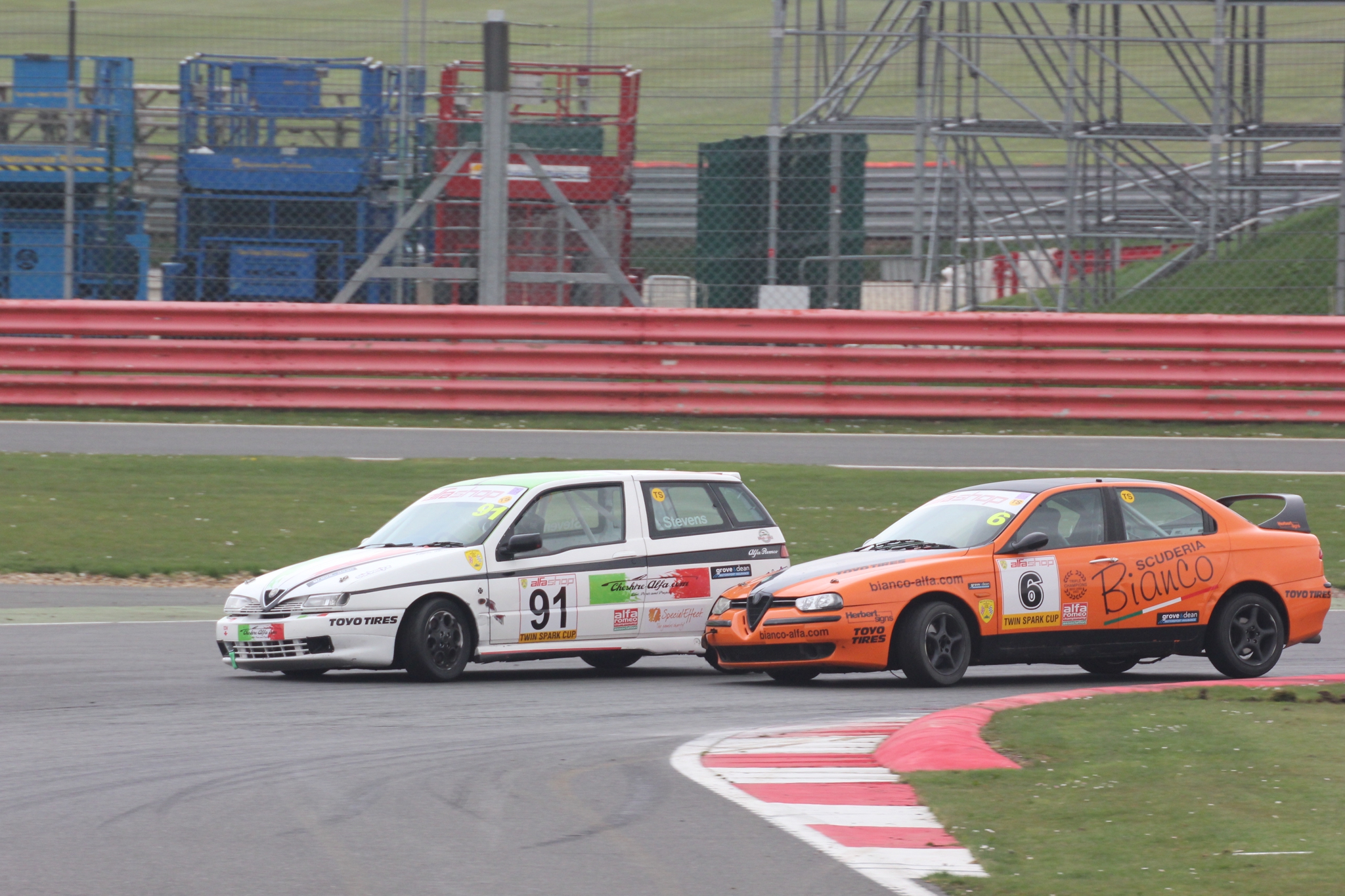 The arrival of new drivers in the Championship is always of considerable interest and there are some that shine immediately. At Silverstone this was the case with Simon Cresswell who now has the ex Tom Herbert 156, a winner at Rockingham in 2014. Simon was rapidly on the pace, closing in on the battle in race 1 between Paul Plant, Jon Billingsley and Andy Hancock. Who knows where he might have finished had he not suffered a stuck open throttle just after half distance. In race 2 he came up against another newcomer, Richard Stevens, in his 145 only just failing to catch him on the line. However, Richard was putting in a strong performance of his own and we can expect him to feature well in the future. Third new driver was Jeremy Chilton and he continually improved his lap times at Silverstone and we have another newcomer at Rockingham as James Browning will be bringing out his ex Steve O’Brien 147 for the first time. A very last minute entry is that of Tim Perry in the Bianco renta’ 156 that Tom Hill took to two 2nd places at Silverstone. Tim raced at Rockingham in 2013, finishing 3rd in a 147, with a fastest lap quicker than that of runner-up James Ford. 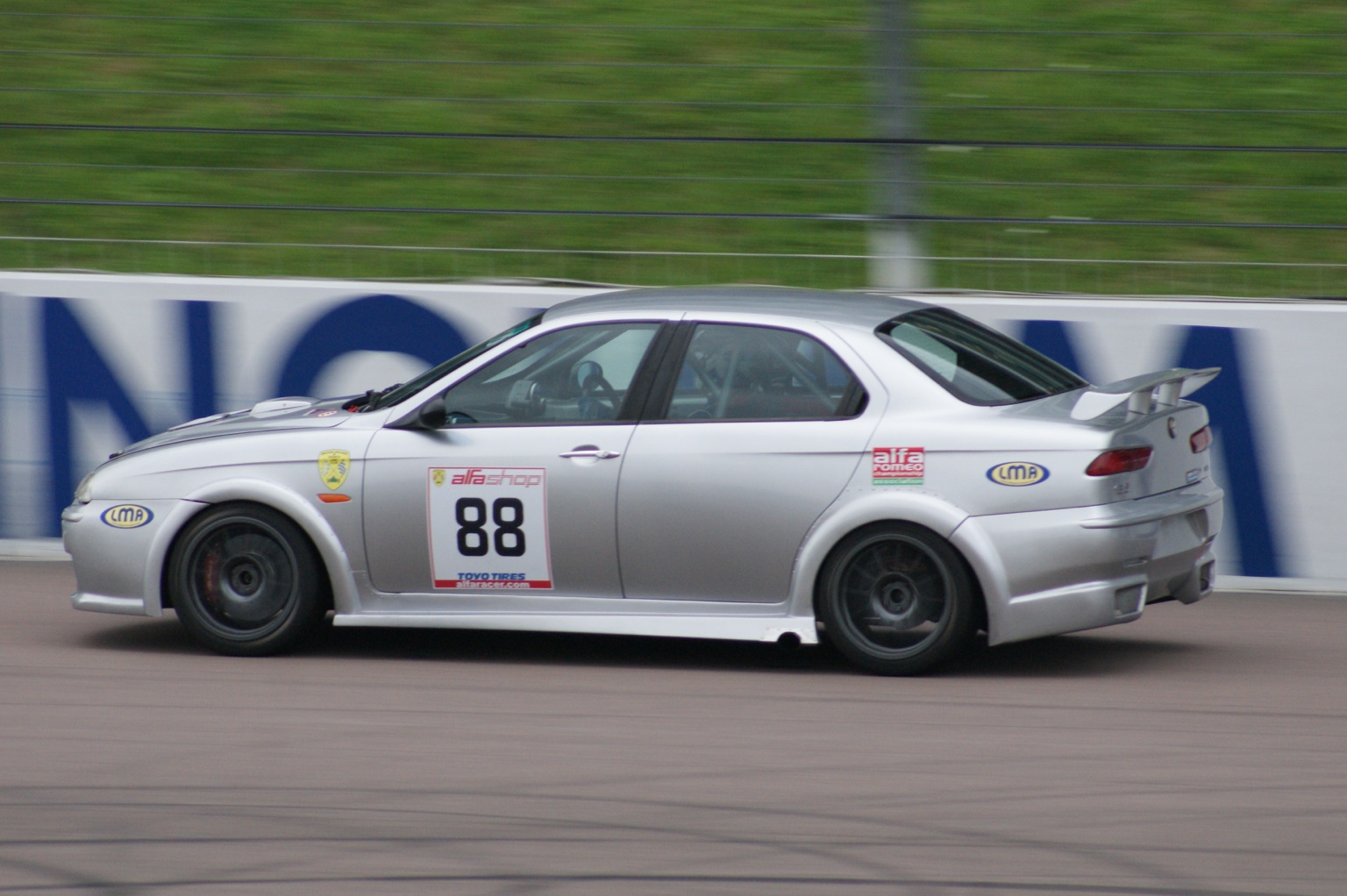 Overall, barring a series of catastrophes, the races are going to be won by cars from the Modified class. At the time of writing, we don’t actually have an entry from Graham Seager which is awaiting a new auxiliary engine pulley for the GTV but we expect him to be a last minute addition. Evenly matched should be the 33s of last year’s double winner Chris Snowdon and Bryan Shrubb but they will be looking over their shoulders at the 156 Turbo of Vincent Dubois who was only a second or so shy of their lap times last September. Vincent has undoubtedly been trying to make the car quicker over the winter. Andy Robinson is due some luck with his extremely potent 156 3.8 (watch it on the banking!) but all eyes will be on Roger Evans’ new project – his 147 GTA 3.8. 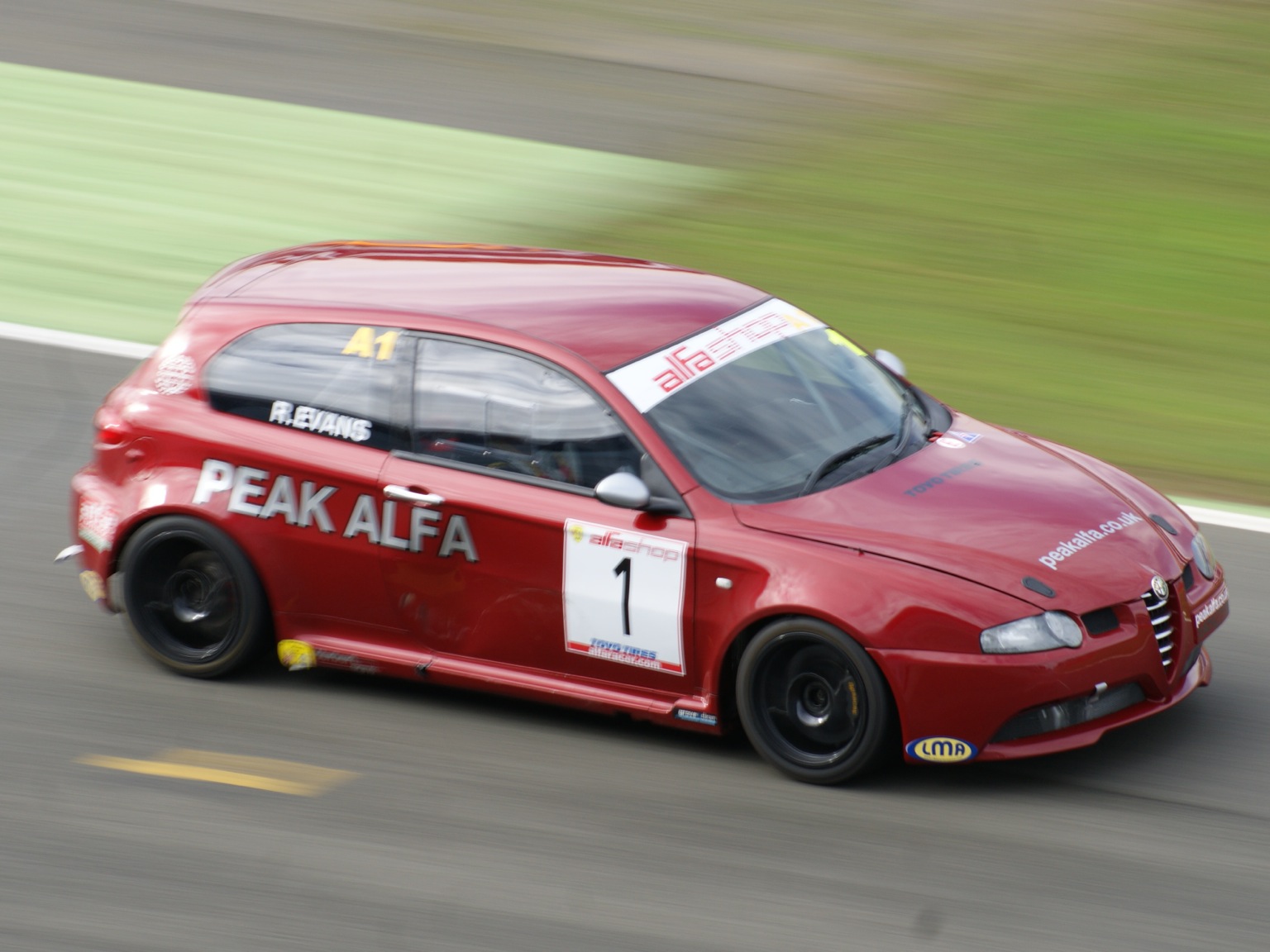 He raced it in the final race last year although it failed to finish on that occasion. However, Roger knows the 147 well having raced to two Championship titles in the ex Sarah Heels car and I would expect him to be well on a par with Graham Seager’s GTV. The final car in the Modified class is the Mito of Davie Peddie. This is another car that has undergone development during the winter months although I am surprised that it is not running in the Power Trophy. Clearly Davie knows something we don’t! Whatever, it is good to see a current range model out there on the grid. 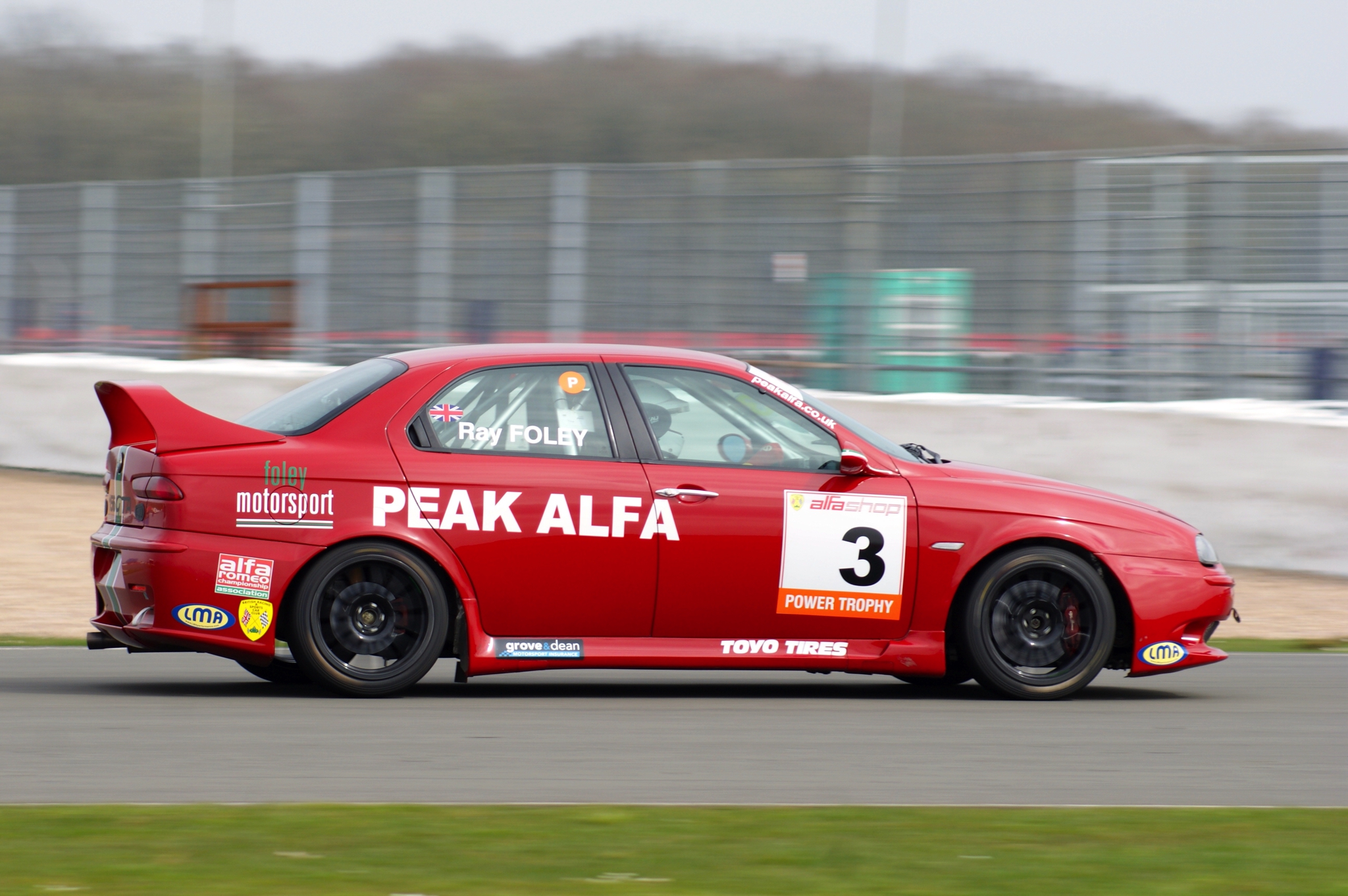 So far the Power Trophy hasn’t quite got off the ground and Ray Foley was out there all on his own at Silverstone, albeit driving beautifully in the ex Roger Evans 156 GTA but without anyone to “play” with. From his own personal performance point of view, Ray (now on slicks) was 3” a lap quicker than he had been with the same car back in October which meant that he was now comfortably ahead of the battling Twin Spark cars but that meant a lonely 4th place in each race. 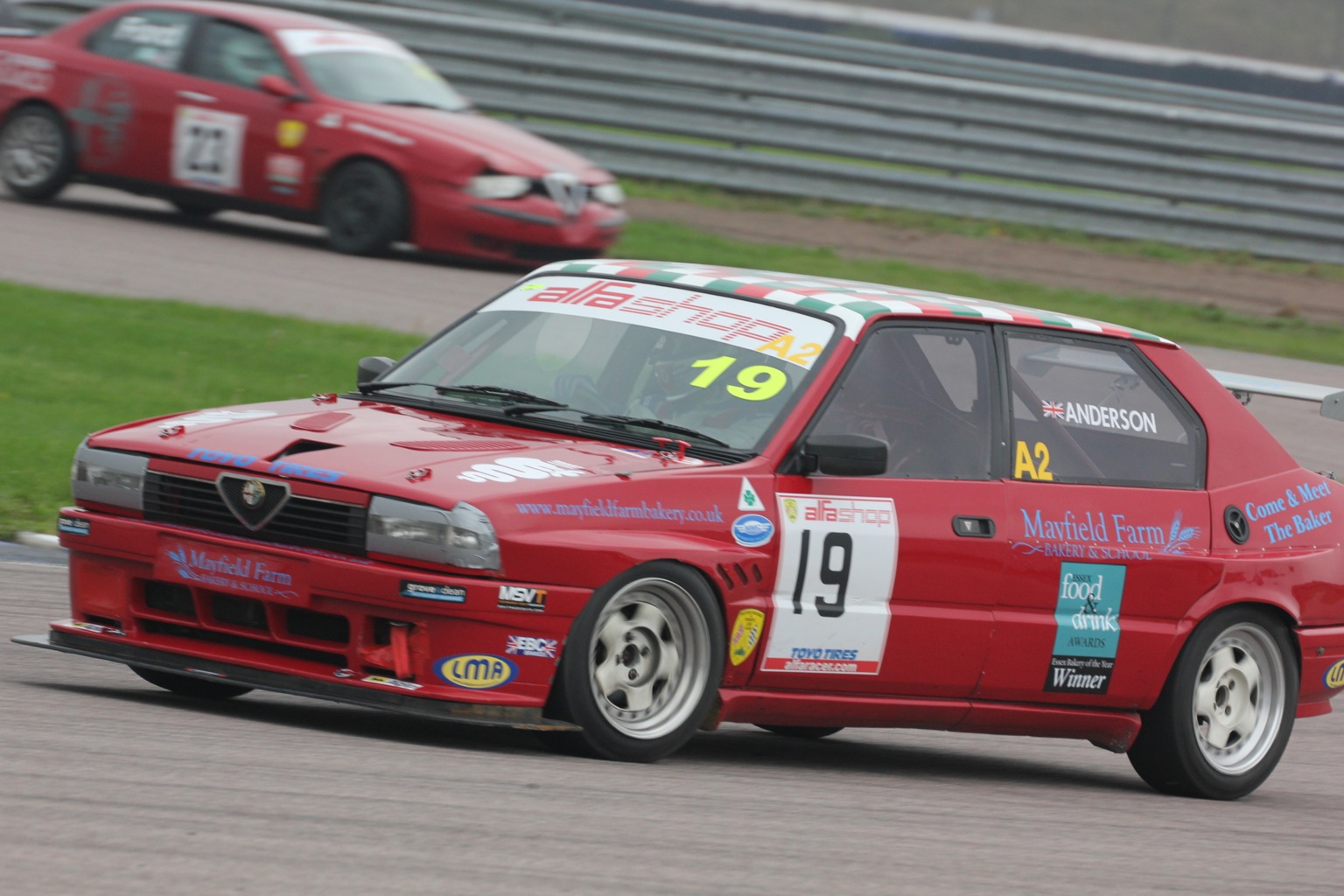 Rockingham could be different, however, as Nick Anderson has just put in an entry for his 33 8v, the engine of which has been rebuilt recently by Brunswick Motorsport. We hope that others will follow before too long to keep Ray and Nick company in what has the potential to become a well supported and varied class.

It is an early start on both days at Rockingham but this is probably the price we have to pay for being on the British GT package as one of the invited support programme. So it is 9.00 am for qualifying on Saturday morning with Race 1 at 2.05 pm with 9.50 am set for the start of Race 2 on Sunday morning.