We left Donington with a new Champion – Tom Hill –  at 20 the youngest in our thirty five year history.

With eight wins in the Twin Spark Cup from fourteen starts, his season has also been a credit not only to his driving but also to Bianco Auto Developments who prepared his immaculate black and gold 156. Other winners during 2016 have been Dave Messenger (twice at Brands Hatch), Paul Plant (Donington), Simon Cresswell and Jon Billingsley (Zolder) and James Ford (Oulton Park). This coming weekend at Rockingham, we shall be watching to see who takes the runner-up position both overall and among the Twin Sparks. Simon Cresswell arrives with a 19 point lead over Dave Messenger  who has been moving up the table relentlessly after his poor start to the year. Dave also has a good record at Rockingham and many will recall the close battle he had with Neil Smith’s 147 back in 2012. 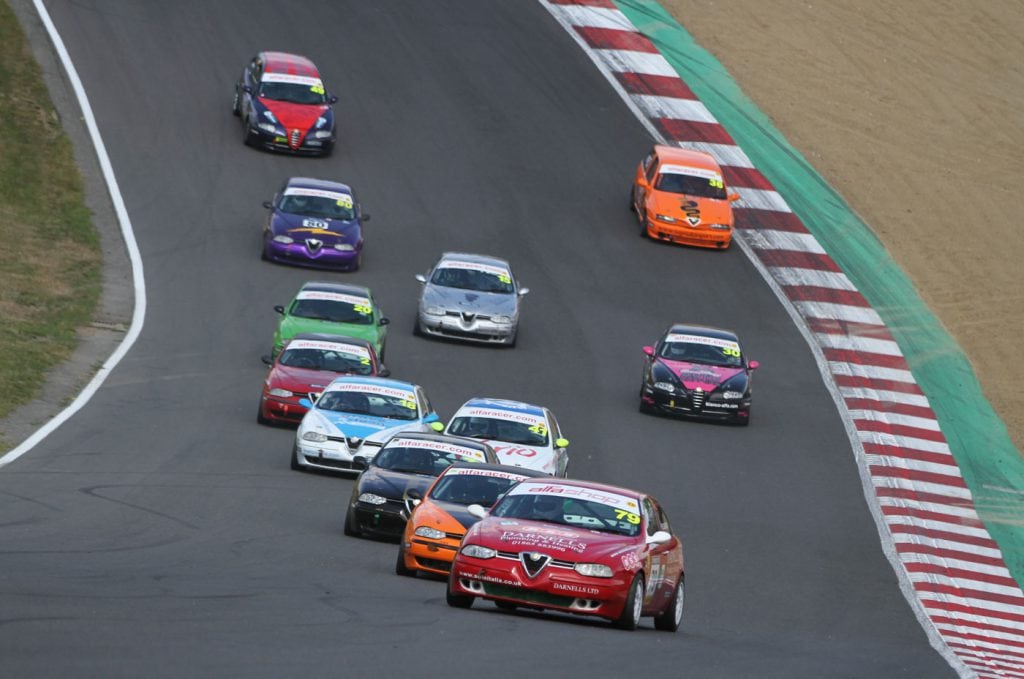 Probably some of the closest racing will be found just behind the leaders in the Twin Spark Cup with battles to be fought between Andy Inman, who has been having an excellent season, Joshua Lambert (147) and Jeremy Chilton and Paul Webster with their familiar 156s. If he has fully sorted  the problems that affected his 145 at Donington, Roger Evans should be ahead of this group while another potential 145 contender is Richard Stevens, making his first appearance since his engine failed at Oulton in June. A late entry has come from Nick Anderson who has gone down the unusual route of preparing a 916 Spider that he has owned for some time. This will be the first time that we have seen one of these in the Championship. A test session at Snetterton on Tuesday evening was enough to persuade Nick that he should race it Rockingham, despite his running being interrupted by a power steering failure. The car is painted yellow, so should be easy to spot. Another late entry is Tom Herbert in Paul Plant’s 156. Tom, of course, took a class win here in 2014 with the car now raced by Simon Cresswell so will certainly see himself on the podium at some point. Although he may be rusty, we know the car is quick. 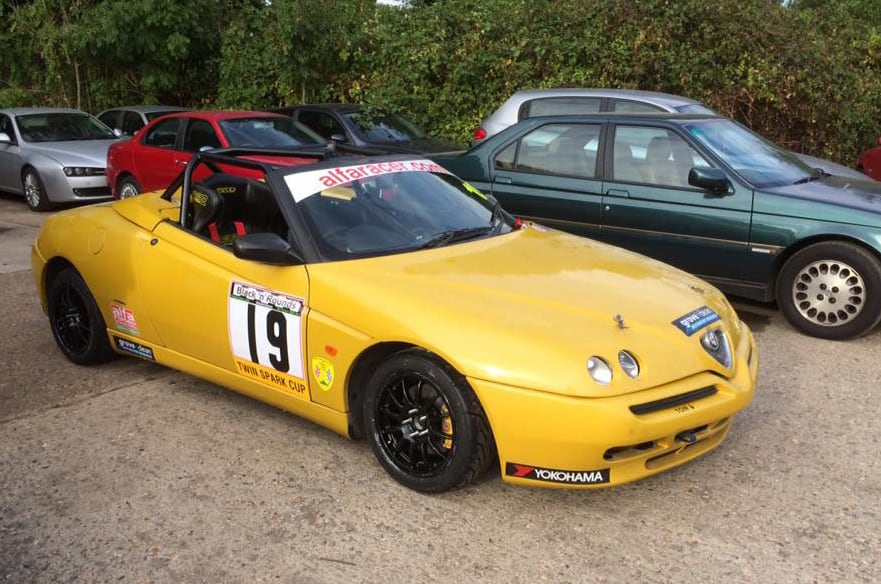 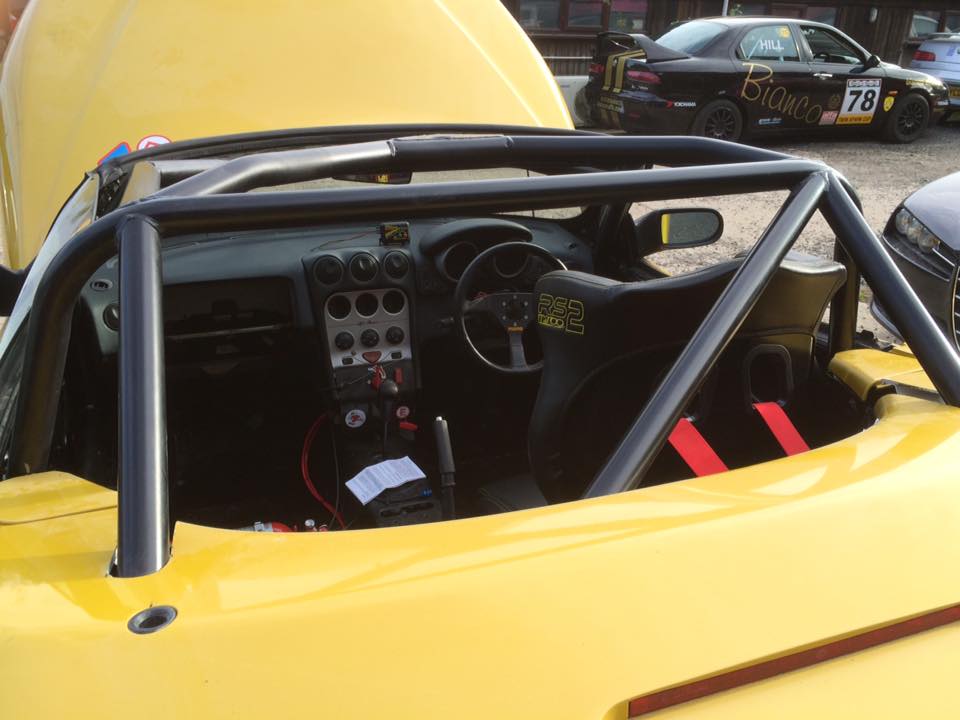 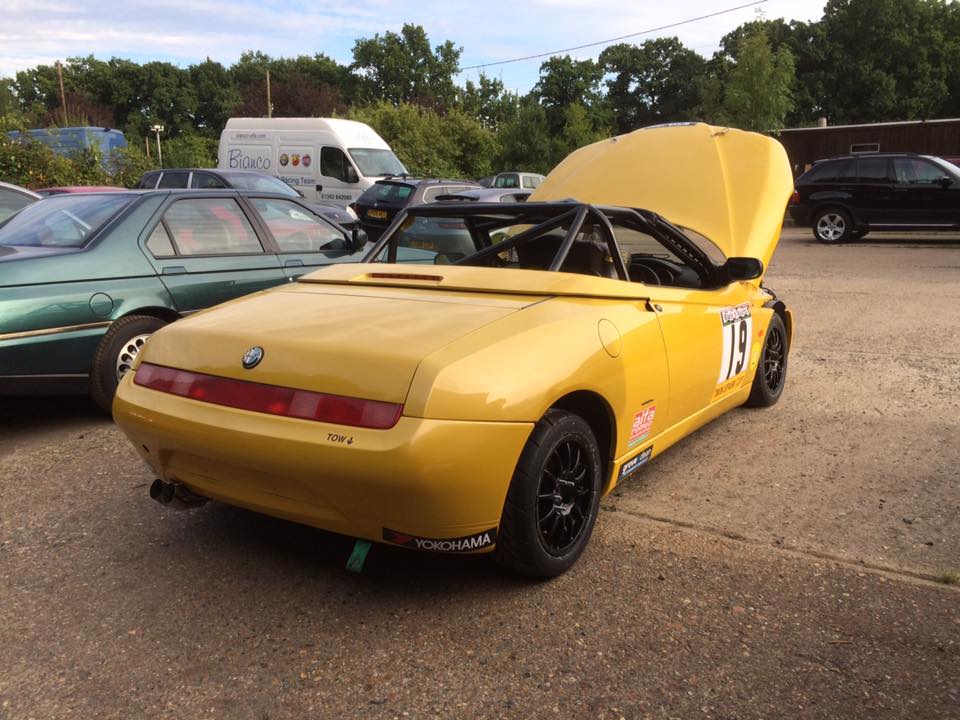 Sadly, neither of the Power Trophy front runners will be at Rockingham, which means that the class title will go by default to Ron Davidson and his popular orange 164 that went so well at Brands Hatch and Donington. Ray Foley will stay as runner-up.  The only Power Trophy entry at Rockingham will be the 33 1.7 16v of David Lambourn. The Modified category will see the return of Barry McMahon’s 156 turbo (with 1750 Giulietta engine) that we have not seen since Barry gave us a demonstration of its capabilities at Silverstone in May. This time he will face the supercharged GTV of Donington double winner Graham Seager. Andy Robinson has actually won the Modified class but after his 3.8 engine failed in the second race at Brands he has had to miss the final two meetings of the year in favour of a new engine build for 2017. It seems that he will opt for a supercharged 3.2 unit, similar to that used so successfully by Graham Seager and Roger Evans.

The winner of the Twin Spark Cup class in the Sunday race will take home the Kevin Griffiths Trophy following on from 2015 winner Matt Daly.  We shall be in the Outer Paddock this weekend and look forward to seeing you there. 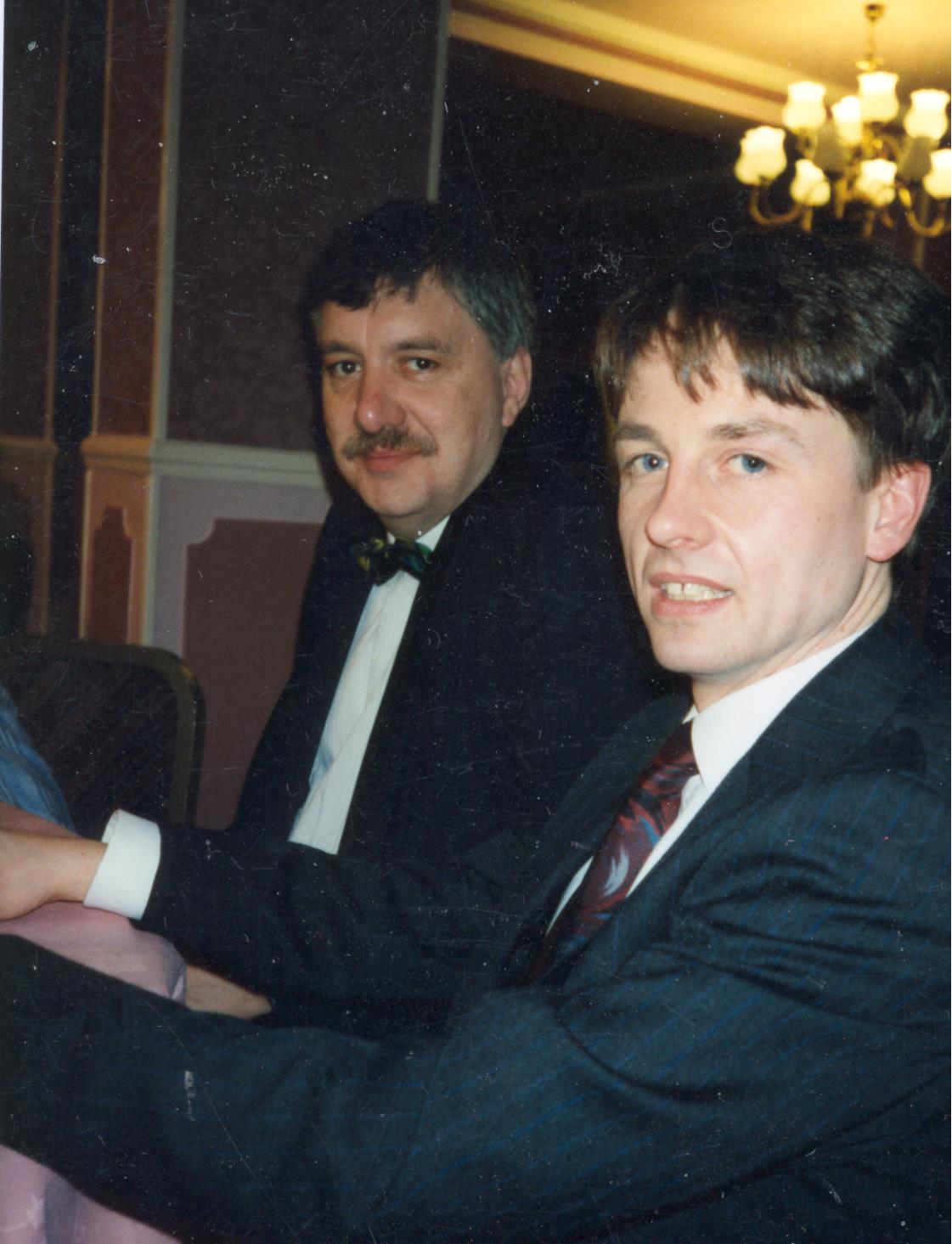 We were very sad to hear last week that Bob Armstrong had died at the age of 69. Bob was a longtime friend of the Championship in his various roles with the BRSCC and elsewhere and for many years had been a Championship Steward. He also attended some of our annual dinners in the days that were held at the Reigate Manor Hotel. Bob had originally joined the BRSCC in 1988 as Competition Secretary and with Chief Executive John Nicol made a very strong partnership. I spent much time negotiating with him over dates and I always recall his wish to be as accommodating as possible, giving us variety of venues at a time when we were having many more race meetings (and single headers) than we do now. He was also firmly of the belief that the older well established championship should help to support in terms of entry fees that were just starting out. He left BRSCC for a while to take up a role at Silverstone and then returned in a part time capacity which involved dealing with regulations and helping to get them sorted out with the MSA as early as possible each year. Bob also had a role with the Motor Racing Archive which sadly, after the death of its founder, seems to have been lost from view in a warehouse somewhere near Snetterton. Our thoughts are with Karen Farley and his son James and other family members. We shall all miss him.

Ted Pearson was out again with his lovely metallic green Alfasud Ti at Snetterton last weekend, taking two wins in the Classic Touring Car races (pre ’83 and pre’ 66). Easy to forget that Ted was double Alfa champion in this very same car (prepared by BLS Automotive) in 1991 and 1992. Also at Snetterton was Richard Drake in his Napolina liveried Sud Ti and the Alfasud Sprints of Malcolm and Simon Jeffs.

Martin Parsons sent me an e-mail the other days announcing his “retirement” from racing after some 30 years of competition, 24 of which were with Alfas, after which he went on to British GTs, Belgian Touring Cars and lots of Britcar events in a variety of cars. 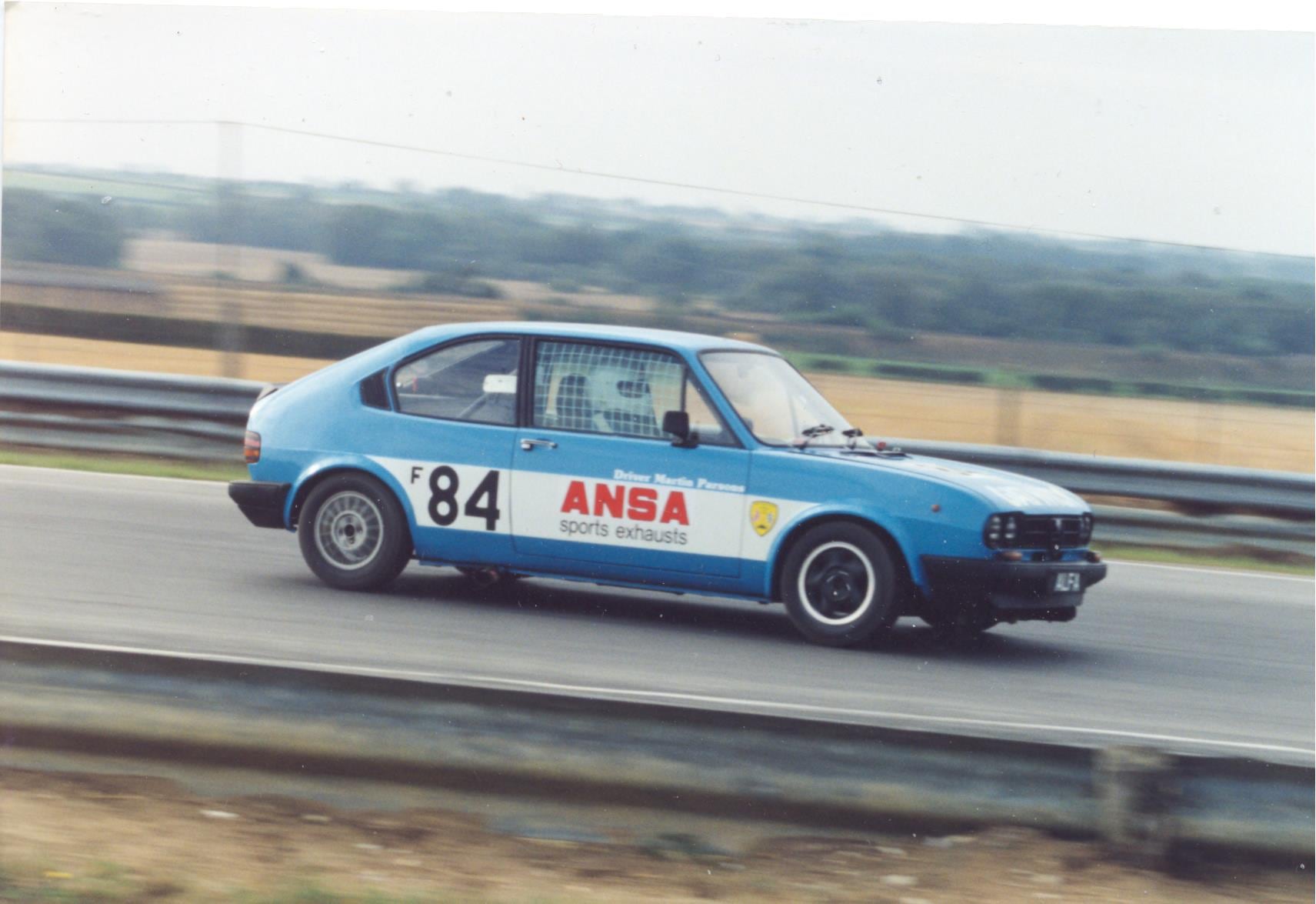 “I still follow the races and wish the best of luck to all that know me. Some names I will mention but others shouldn’t be offended  if I miss you. Ron, nice to see you out there, give me a call. Paul Edwards, cannot forget the fun we had. Dave Ashford at Brunswick – we had run=ins but good times in Lithuania. Simon Fish (shows there’s hope for old sods as you are driving an F1 car), Clive Hodgkin, Graham Heels and family, Adie Hawkins, Chris Snowdon, and many others that I cannot remember as our racing days were pre internet – good luck to you all. I’ve not got near all the good friends I made and good races with each and apologise. One small mention – Nick Baughn, I hated you but you taught me a lot and that I appreciate! And to finish, the best thank you I can say is to Mike Buckler. Without you I’d never have done 30 years”.

Martin started racing in an Alfasud Ti, easily distinguishable with its large ANSA exhaust decals on the side, before moving on to race one of the earliest 33s in the Championship. That was followed by a couple of 164s. He also shared Ron Davidson’s GTV in our 2001 & 2002 mini-endurance races. Despite his numerous class wins, he never won the championship outright but class F Championship wins in 1991 (Alfasud), 1994 (33) and then in Class D in 1995 & 1996 (164) were strong statement’s of Martin’s talent. I wonder, though, if Ron Davidson came along with an offer to share his 164 in another min-enduro Martin could resist it!

Nick Baughn. There are often strange coincidences in life. Not long after getting Martin Parsons’ e-mail I bumped into Rob Kirby’s sister Carol who gave me up to date news of Nick Baughn who is now living in Vietnam. Shortly afterwards, Nick was on the phone (with a remarkably good line) and we had a long chat about the days when he and Martin were class F front runners. Nick was relishing the memories of beating Martin to the Class F title in 1993 with, of all things, an Arna!! Hopefully he will be in the UK later in year and we can meet up for some more Alfa Championship reminiscences. In the meantime, I suggested that he looked at some of the Donington in-car videos and he rang me again later full of enthusiasm for the racing and quality of the footage – “perhaps I ought to make a comeback” he said.