We’re very sad to hear that BRSCC Chief Scrutineer, Mike Hibbins passed away suddenly today. Our thoughts are with his widow Judith & the rest Mike’s family at this difficult time.

Mike served the BRSCC for many years and was at Rockingham earlier this month. He will be greatly missed. 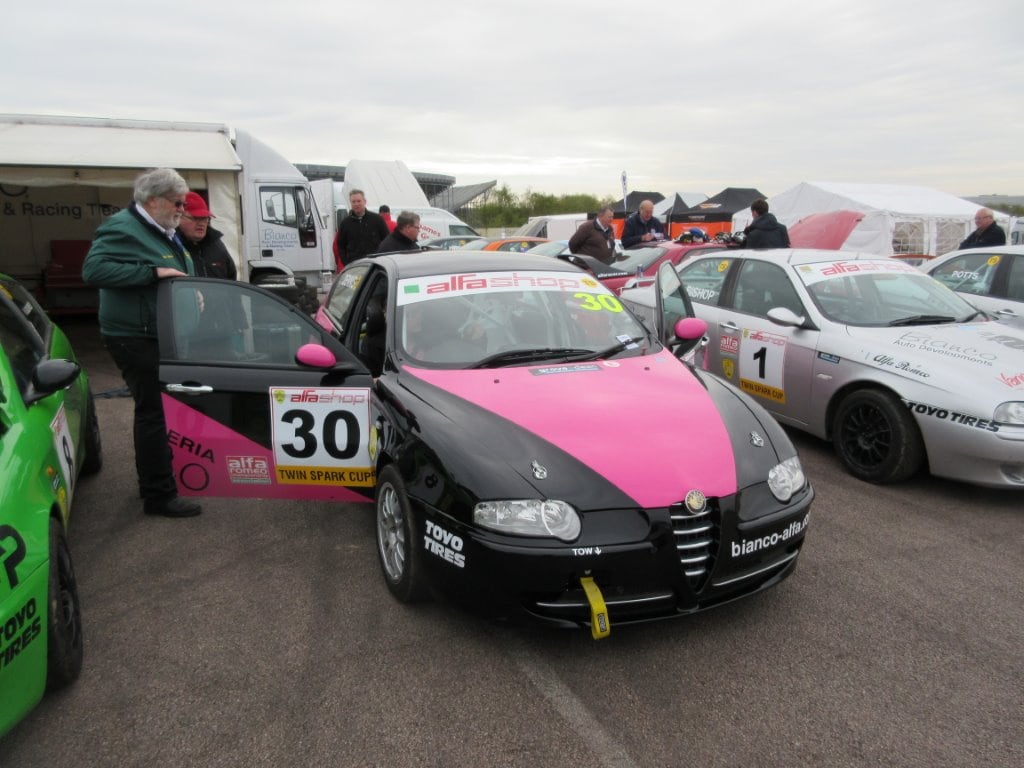 A return to the fabulous Oulton Park International circuit in Cheshire is always an occasion to savour.

Even more so this year as there is the likelihood is that we shall come away on Saturday afternoon with a new Championship points leader. James Bishop has chosen to miss this round to go on holiday and as James Ford will not be there either, it will be a chance for several Twin Spark Cup drivers who have yet to stand on the top step of the podium to put that right. The dropped scores rule (where a driver’s three worst results or non appearances can be discounted) will, of course, come into play as the season goes on but for the moment we can perhaps enjoy a new name leading the way. 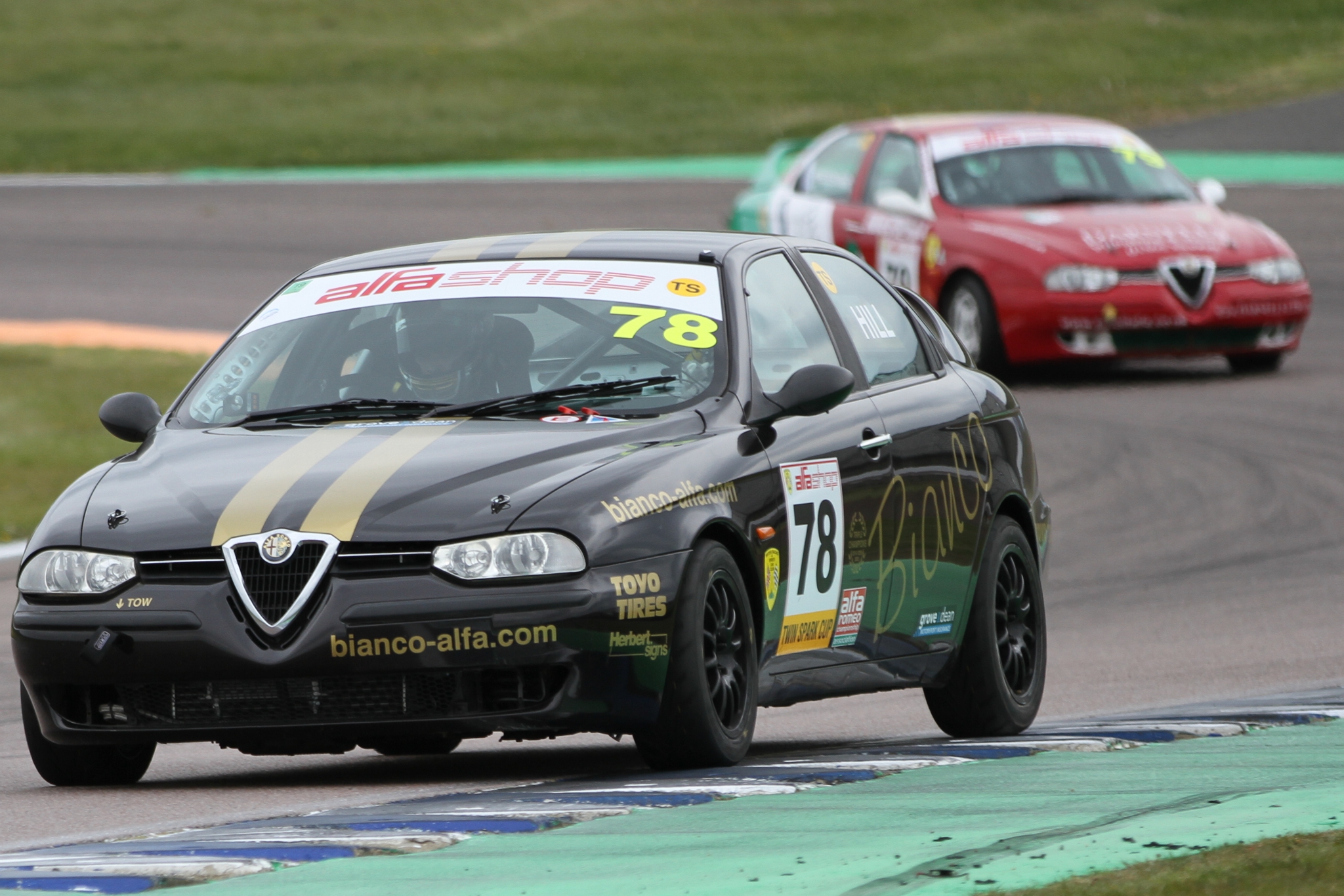 One of the strongest contenders will undoubtedly be Tom Hill whose newly built 156 was on the pace straightaway at Rockingham but he will have the handicap of having to learn the circuit. This will certainly not be the case for Stephen Potts who had one of his best race days at Oulton last year, taking a clear pole position by nearly half a second from James Ford and finishing second, only 2” behind him in the race. On that occasion Stephen was in his 147 but he seems happier with the balance of the 156 that replaced it after an accident at Snetterton, so perhaps this will be his chance for that elusive first win. 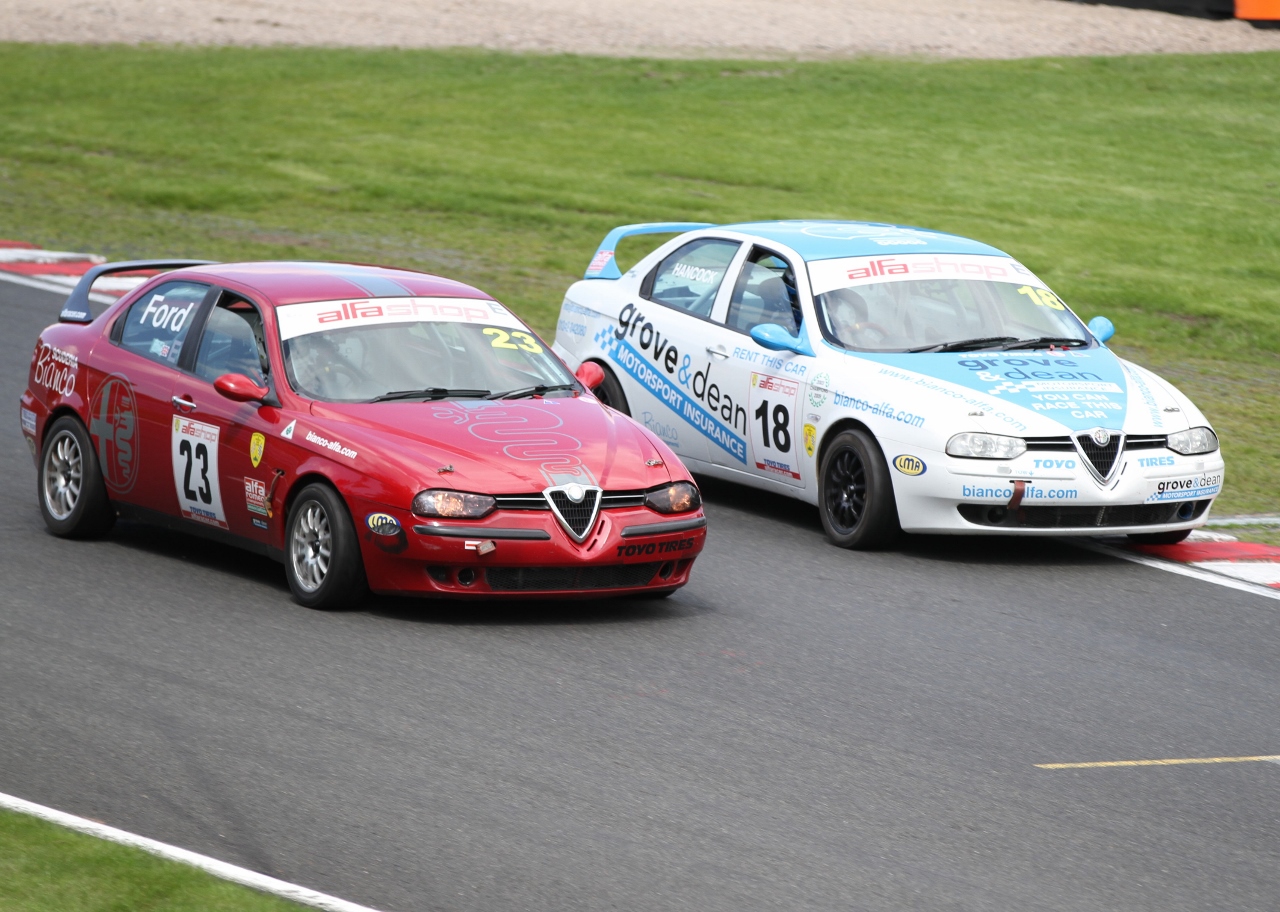 Another driver to feature strongly at Oulton last year was Andy Hancock who ran second in between James Ford and Stephen Potts for a while before dropping to third and then hitting a kerb and cracking his sump with three laps to left to go. 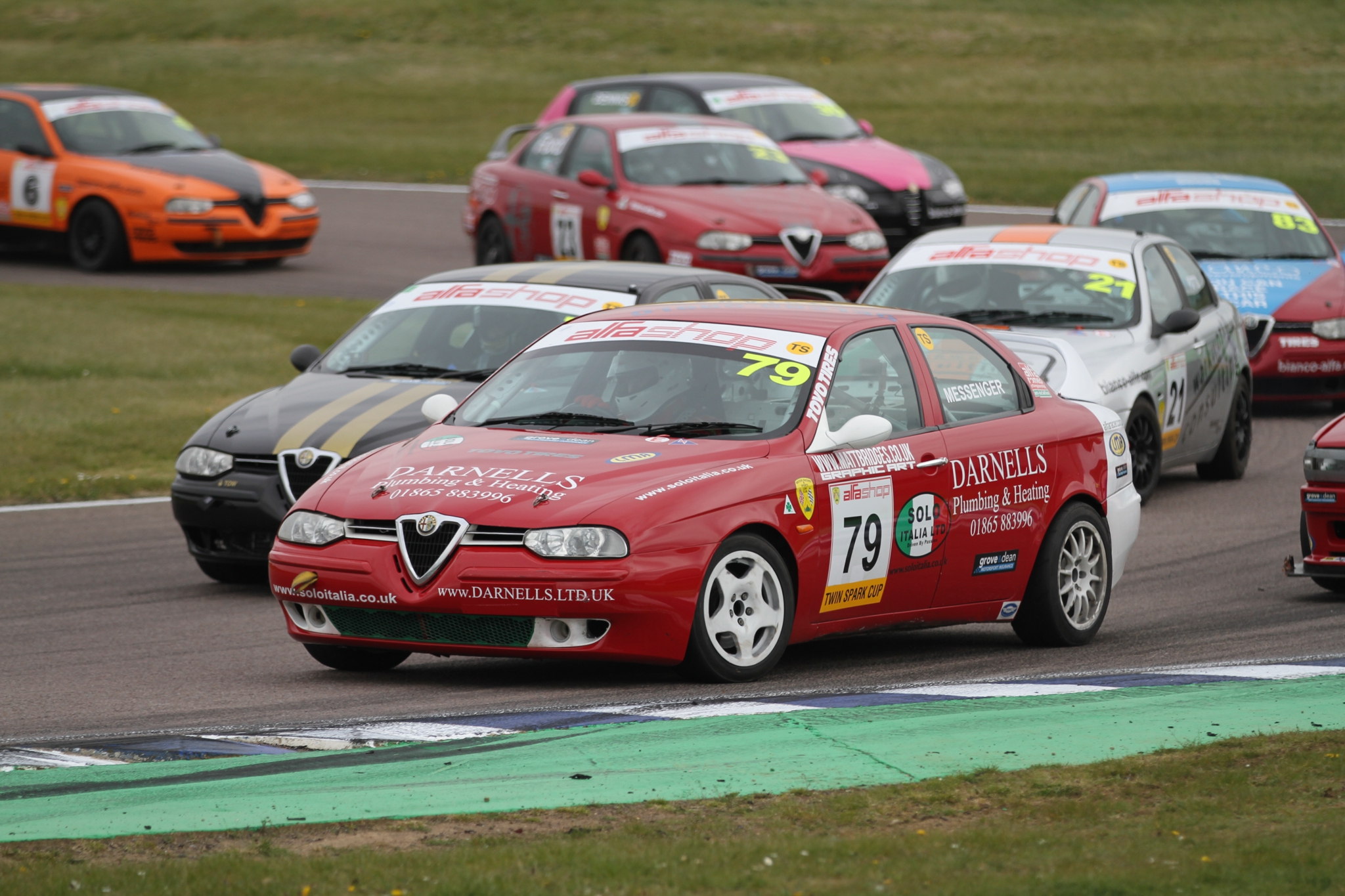 Dave Messenger took a couple of wins in the old Class E and his form this year would suggest that he could do it again. A third place in 2013 is his best result at Oulton so far, finishing just ahead of the closely matched 145s of Matt Daly and Tom Eastwood. 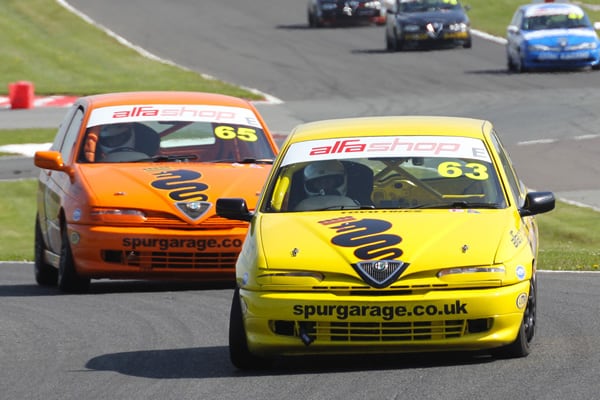 A dark horse could be Simon Cresswell, and as he plans to test on Friday, he should be able to hone his undoubted talent and put in a challenge for a top three result at least, despite the fact that this will be only be his fifth ever race. It is good to welcome back Chris Healey who missed the opening races as his 156 needed some tlc from Ian Brookfield. Chris is no stranger to Oulton , taking a second place in the old Class E in 2009 and then a second overall the following year in the 3 litre GTV with which he nearly won the championship title. Another to have missed Rockingham, although he was there looking after a busy Bianco Auto Developments entry alongside Gary Walker and Harry White, was Paul Plant. Paul is the class lap record holder, ran strongly at Silverstone in the opening rounds and can never be discounted. Other Twin Spark Cup entries have come from local driver Richard Stevens with a 145 that has already shown good potential and Jeremy Chilton and Luther Blissett with their 156s. 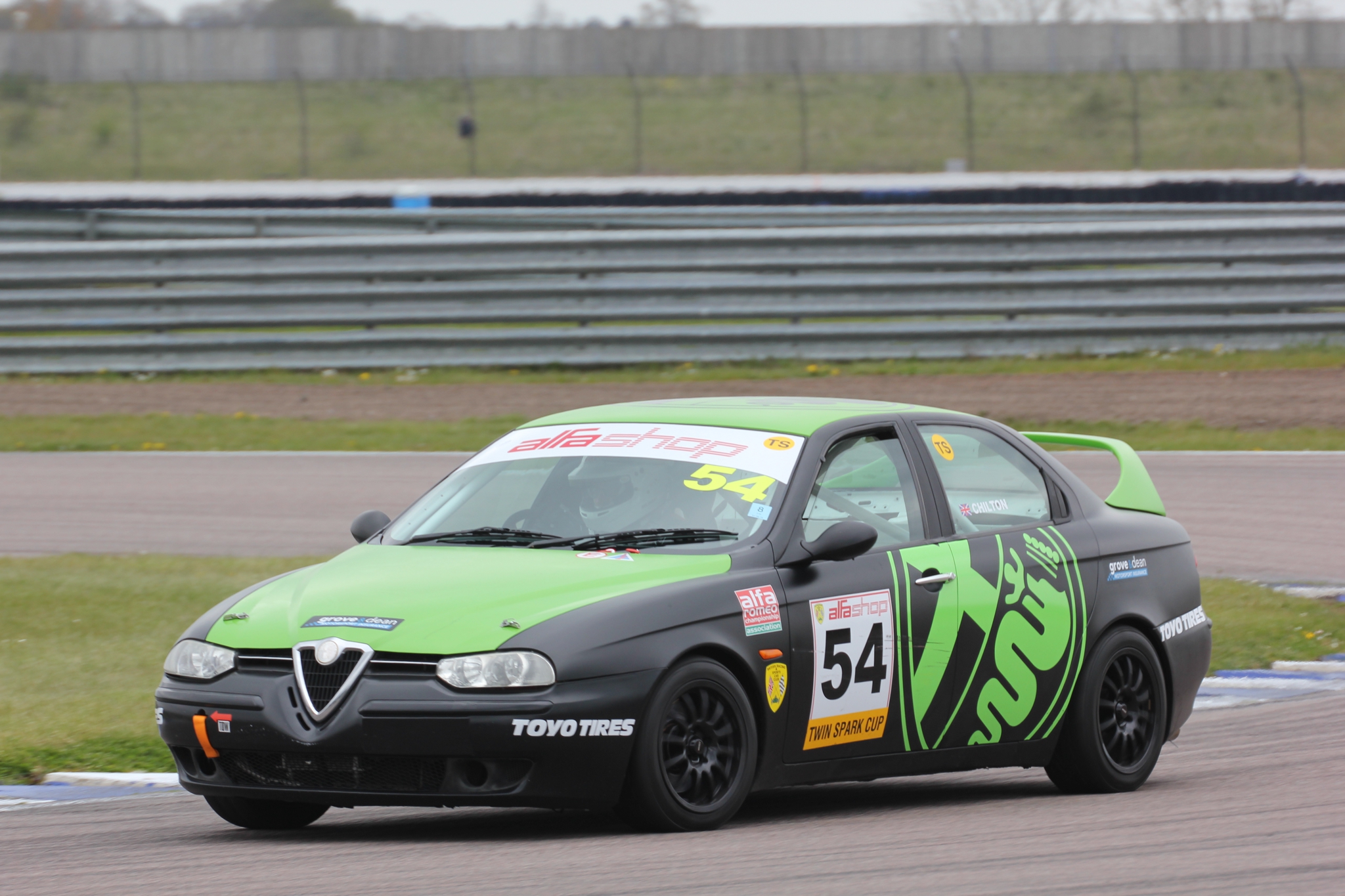 This year the battle for the overall race win is likely to revolve around the Peak Alfa cars of Roger Evans (147 3.8 GTA) and Graham Seager (supercharged GTV 3.2) but Andy Robinson was challenging for second place last year when he ran off the circuit at Island Bend. The 3.8 156 is a much better race car now, as was shown at Rockingham, so Andy could also be close to his Peak Alfa “team mates”. 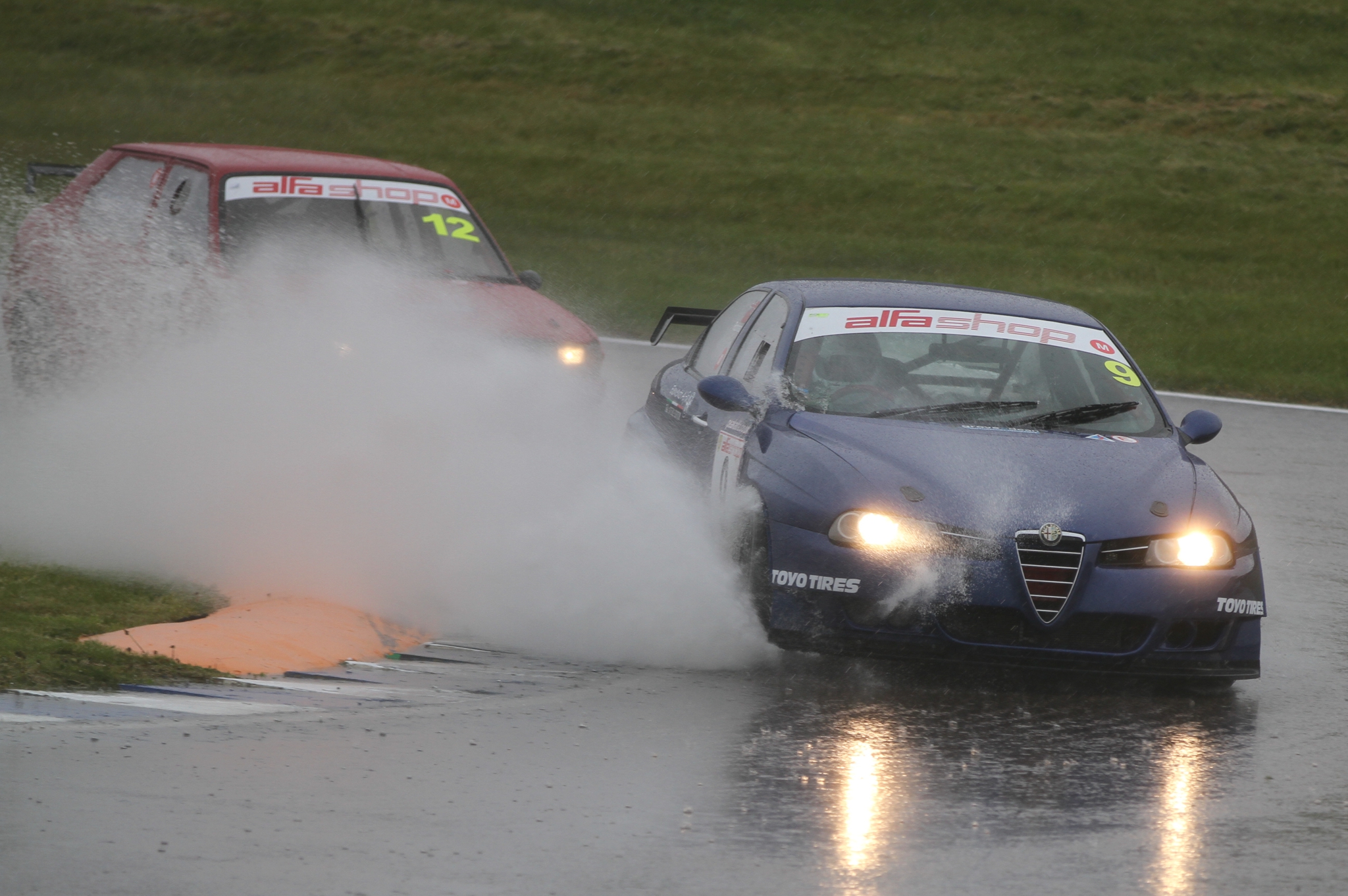 Interesting will be the performance of Bryan Shrubb who drove two strong races at Silverstone. At Rockingham he was one of four drivers to qualify within a second of each other as they fought for pole but was a little overshadowed in Saturday’s dry race by Roger Evans and Vincent Dubois (156 Turbo) finishing 3rd. Bryan hasn’t raced at Oulton for several years but crossed the line 5th on a wet track back in 2007. The 33 was still fitted with its 8v engine then but now has a more powerful 16v unit, with fuel injection, built by Bryan’s father Tom at BLS.

Finally, a complete unknown is the 147 Turbo to be driven by James Nicholls. Prepared by Allitalia, Italian car specialists in Wrexham, the car was originally one of the 147s prepared by JSM to compete in the BTCC in 2001 with the likes of Tim Harvey and Dave Pinkney at the wheel. One of Tim’s only successes with it was actually a third place at Oulton. After a spell being used as a rally car, it has now emerged with a turbo Q4 engine, much the same as that fitted by Vincent Dubois to his 156 and we know how quick that is! The limiting factor will be 21 year old James’s total lack of car racing experience although he did race karts competitively for five years before taking a break in 2012. 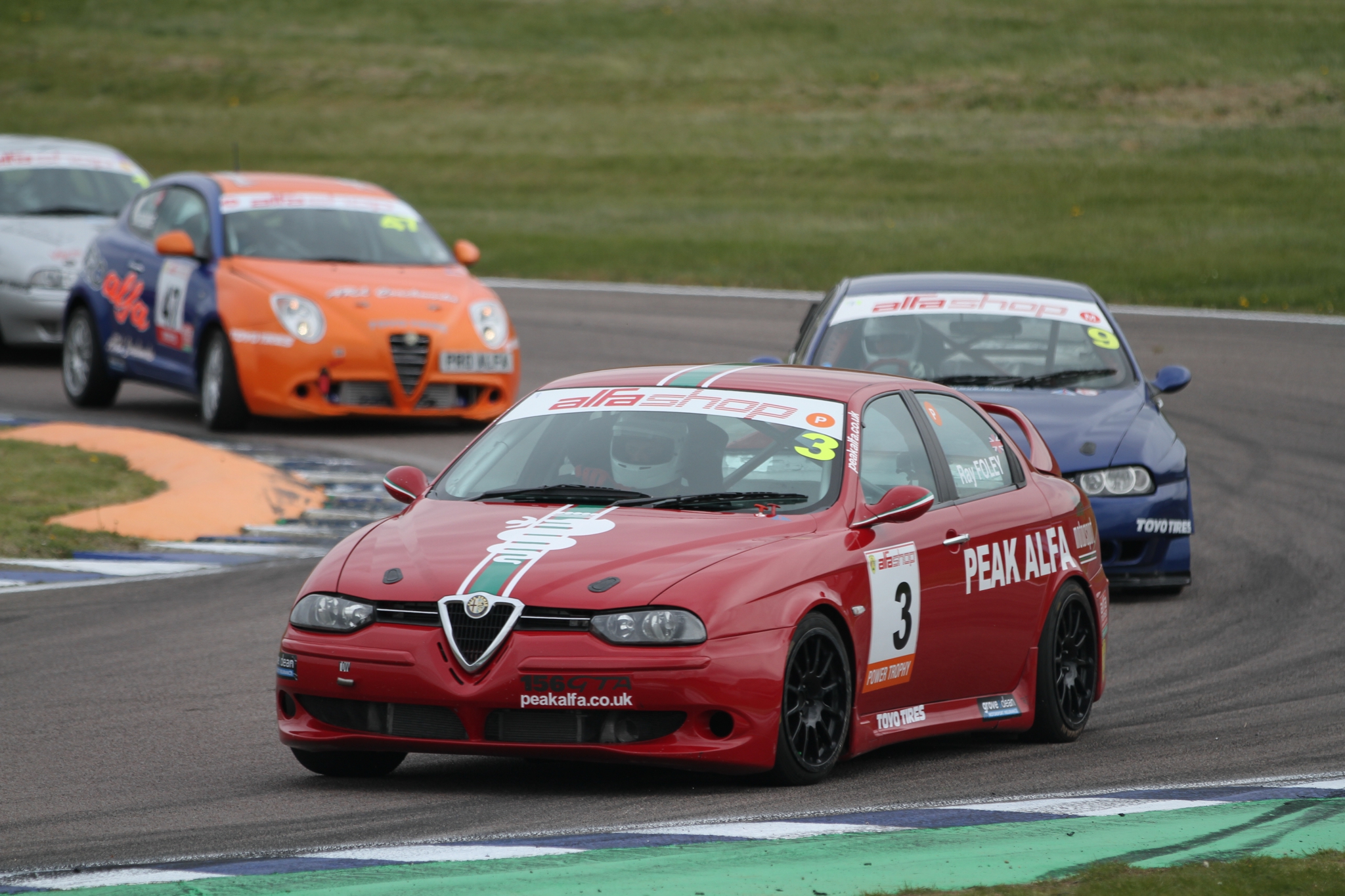 The only Power Trophy entry once again is Ray Foley’s 156 GTA but Ray might well have another overall podium finish in his sights if things don’t go smoothly for the Modified cars. Whatever, Ray tells me he is off to pastures new again soon with a visit planned to Magny Cours for a round of the Alfa Challenge.

Our qualifying session is at 10.30 and the 20 minute race follows at 2.30. Anyone coming to spectate will find us in the area of the paddock nearest to Old Hall and the assembly area. The rest of the programme includes Formula Ford 1600 Northern Championships, the Pirelli Ferrari Formula Classic and the Ford Fiesta XR Challenge and Scottish Fiesta Championship. So plenty to keep you entertained. See you there!