We don’t seem to have had too much trouble with times being disallowed for “exceeding track limits” in recent qualifying sessions, or penalties in races for that matter. However, I came across a fine photograph of Chris Taylor (1750 Berlina) battling with Ian Sinclair (Alfetta GTV) in 1989 that might have caught the Clerk of the Course’s attention had it been 2014!

Roberto Giordanelli contacted me to say that he and Chris Snowdon would be teaming up to drive Roberto’s Lister Chevrolet “Knobbly” at the Goodwood Revival on September 12. They would be competing in the 1 hour Sussex Trophy race on  Friday evening. Anyone whose memory of the Alfa Championship extends back twenty years will recall some of the great battles that Chris and Roberto enjoyed during the 1994 season in GTV6 and GTA respectively. Castle Combe saw the closest finish of all when Chris led Roberto across the line by a mere 0.02”, Lydden Hill coming close later in the year with a 1” gap. But Roberto had turned the tables at Oulton Park, there being just 1.33” between the two of them. Testing of the Lister at Goodwood last week went well and so for those who are not able to be at the Revival, we shall be watching live timing with interest. 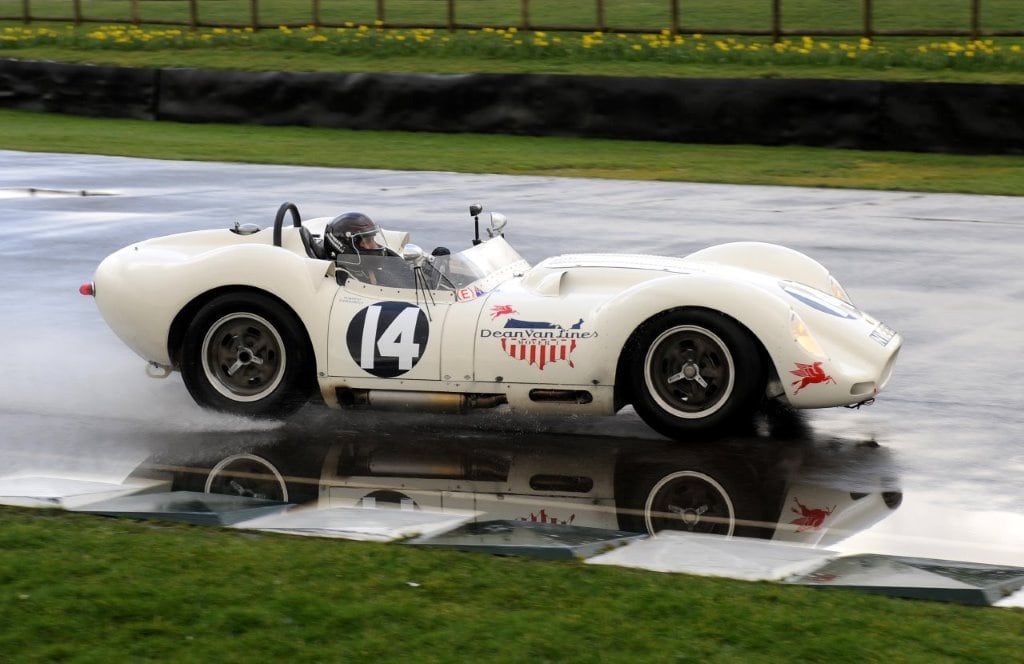 The Lister is not the only car in which Chris has an interest at Goodwood. He will be sharing a Vauxhall Cresta (yes true!) in the two part St. Mary’s Trophy with Rupert Keegan who also shared the Alpilatte GTV6 in the Members Meeting in March . In addition he has been preparing a Borgward Isabella that ex Alfa GTV6 racer Gavin Watson will drive, an MG Magnette, a Fiat 1100 and finally a Studebaker Hawk that will see Jochen Mass as one of the drivers. Quite a work load! A week later Chris will return to the Alfa Championship when he drives John Sismey’s 33 16v once again at Rockingham.

We were very sad to hear of the death of Sally Bishop on 19th July at the shockingly early age of 45 after a battle with cancer. Sally was only 19 when she first raced with us in 1988, driving a modified Alfasud Ti owned and prepared by Nigel Cottee at Trofeo Garage where (quoting from the AROC Magazine) she “confounded the sceptics by handling the car with considerable skill”. Sally continued with the same car the following year, showing good speed in several of her races but in 1990 moved into the super competitive Class F with another Sud prepared by Nigel with sponsorship from Thorn Security. All went well until she had an accident at Thruxton in the wet at Church when Stephen Milne spun in front of her and Sally ended upside down as a result of which the race was red flagged. However, it was an incident between her father and the Clerk of the Course which is remembered more from that day, ending in an MSA Tribunal which I recall attending to give evidence on her behalf. Happily Sally was exonerated of any involvement, not having known that her father would be there that day. 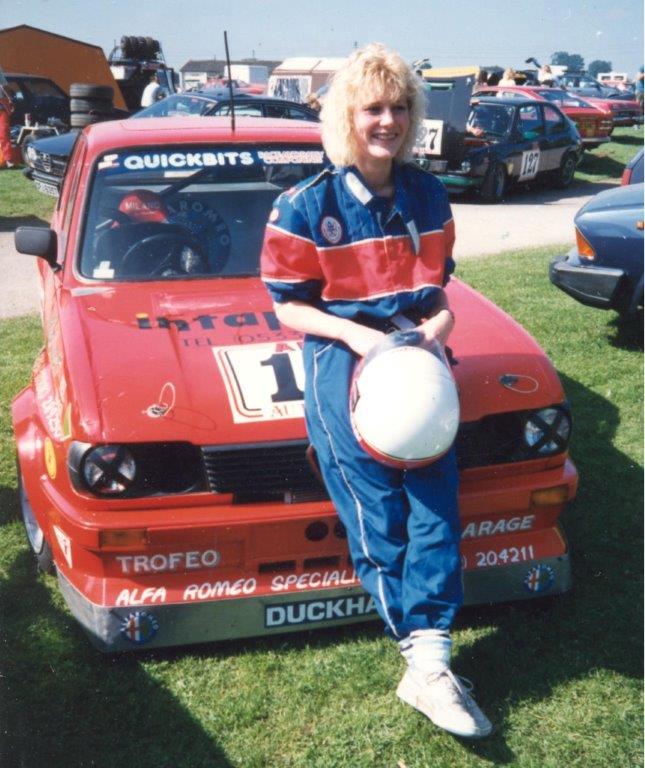 A new Class F car was built up for her by Paul Edwards but things were never quite the same and Sally decided to give up racing at the end of the year and return to her other love, horses. Subsequently, dog breeding and showing became her passion.  We send our sincere condolences to her husband, Paul, and family. (My thanks to Phil Snelling who raced against Sally, including on that day at Thruxton, and was occasionally in touch with her in recent years)

I referred at the end of my Snetterton race report to the death of Nigel Rosser. Soon after I came across a picture of Nigel with the Sud he drove in the very first Alfa Championship race at Snetterton. 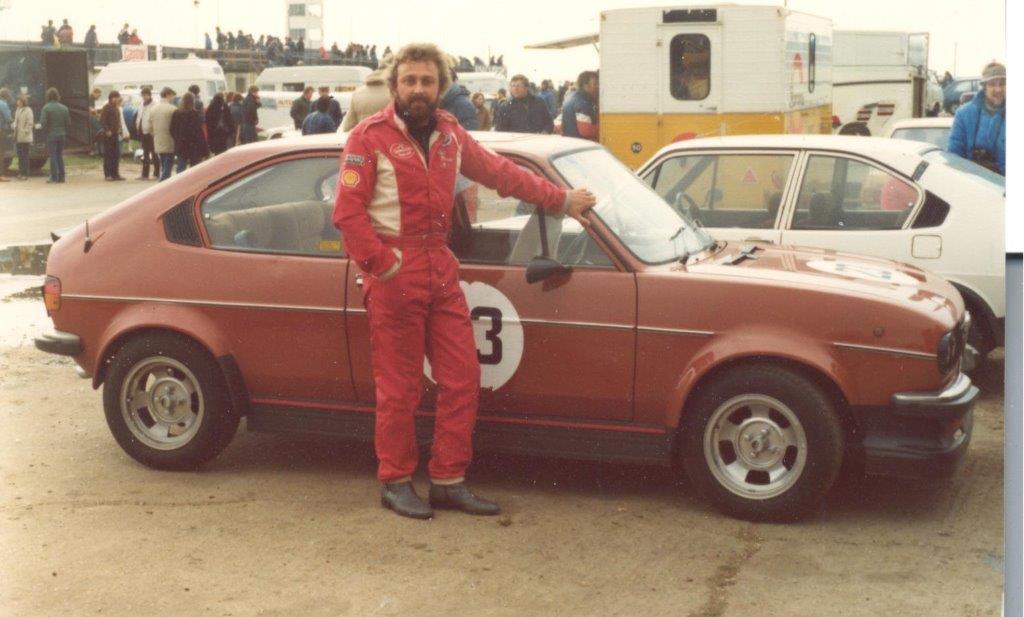 Nigel Rosser with the Alfasud Ti in which he finished 5th in the first ever Alfa Championship race at Snetterton in 1982.

Is it really nearly 20 years ago that we took the Alfa Championship to Zandvoort? Well the memory of that BRSCC run meeting with John Nicol in charge is still strong. 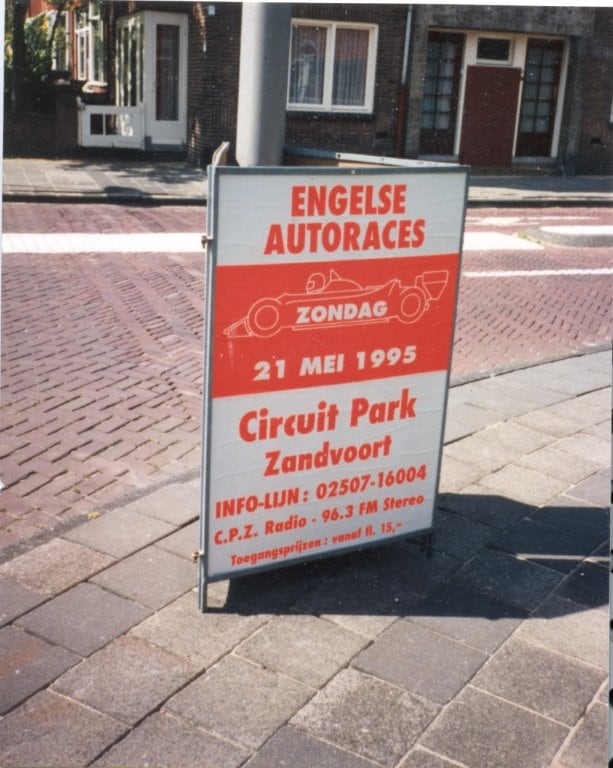 Recalling our visit to Zandvoort in 1995 – no opportunity wasted to let people know what’s going on.

However, although the financial implications are against us, there is still an annual opportunity for any ARCA racers who want to race there, to do so with the European Alfa Romeo Challenge. This comes as part of the Spettacolo Sportivo Alfa Romeo run by the Dutch equivalent of AROC and was this year held over the weekend of August 23rd/24th. A major highlight was  victory in the first race by Anthony George’s 156 Turbo, narrowly beating a 75 3litre and GTV6 although his fastest lap was considerably quicker. In his post race e-mail he wrote “Considering the grid was fairly large – 55 cars on the circuit for qualifying – we qualified 3rd which was OK considering the last time I was at Zandvoort was in Class F in 1995, I think. Pleased with winning the first race but made really bad tyre choice for race 2. We knew it would only be later in the race that slicks would be OK, but it then rained again when we were in the collecting area and that basically finished that. I did try one lap but decided just to come into the pits as it was never going to work”.

46 cars actually started that 30 miniute race and there were some other excellent results for ARCA drivers, led by Ray Foley who finished 13th followed by the Fiat Abarth of Roger McMahon. Paul Plant and Tom Herbert were 16th and 17th with Andy Hancock and Jon Billingsley 31st and 35th. Race 2 was on a mostly wet track and this provided a fine opportunity for Roger McMahon who came home a splendid 4th! Of the rest, only Paul Plant improved to 14th. On Sunday, there came a 1 Hour race and this time it was Ray Foley who excelled again, bringing his GTV home 11th with Roger McMahon 12th. Tom Herbert had a great race to head an ARCA “Twin Spark Cup” 1-2-3 in 19th place overall, 24” clear of Paul Plant who had a rapidly improving Andy Hancock only 2” behind at the finish.

“I really made the journeys to experience the tracks but I have to say the experience has been completely amazing.

There is a good amount of track time in their series and we had one and a half hours each day – Saturday half hour practice, half hour qualifying and a half hour race and then on Sunday a half hour race and a one hour race. From my point of view a Class C car is not the best because all of the classes are for modified cars. However, if you are not expecting to win but to have fun, then there is no disappointment and with so many cars on track there is always someone to race.

Many of their practices are different to ours and it is not uncommon to find you are bearing down very quickly on a recovery truck that is on the circuit, drivers not making a great deal of effort to get off the circuit when in trouble and even a couple of cars actually parked on the circuit!  However, all things considered it is a very exciting series with lots of cars. Experiencing the circuits is very exciting and I have achieved some of my lifelong ambitions in racing at Spa and Zandvoort. Hospitality from everyone we have met, the Dutch organisers plus Swiss, German and French has been amazing and we have made many new friends. All in all a very worthwhile experience and I hope this is enough to give you the flavour”

Alfas in under 2 litre Touring Cars at Silverstone Classic

I recently ran into Alan Lawley, father of Andrew Lawley who raced an Alfasud Sprint in the Championship between 1991 and 1996 and we chatted about Andrew’s latest exploits.  After racing the Sprint and a work comes first gap he moved on to race an MGB very successfully in historic GT races, several of them abroad, before a spell with a Ferrari in the UK.  He now has a Giulia Sprint GTA which he ran with his previous MG co-driver Tom Smith in the Sir John Whitmore Trophy at the Silverstone Classic finishing an excellent 7th, despite a down on power engine. Alan was telling me that Andrew has also just bought a fully authenticated 1958 Giulietta SZ of which more in due course.

The top Alfa finishers in the Sir John Whitmore Trophy were Andrew and Max Banks with their Alfaholics entered GTA who came home a fine third behind two Lotus Cortinas.

Not everything with an Alfa badge is a car!

After the last “News & Gossip”,  Peter Smart e-mailed me to say that he actually has an Alfa badge rug which looks much the same as the one we illustrated. He acquired it at a Beaulieu Autojumble and thinks that it may have come originally from an Alfa  dealer showroom. He also told me that he has bought a part race prepared GTV6 with a view to building it up as a racer in Phil Dowsett Terry Drury Racing livery as seen in 1984/85. 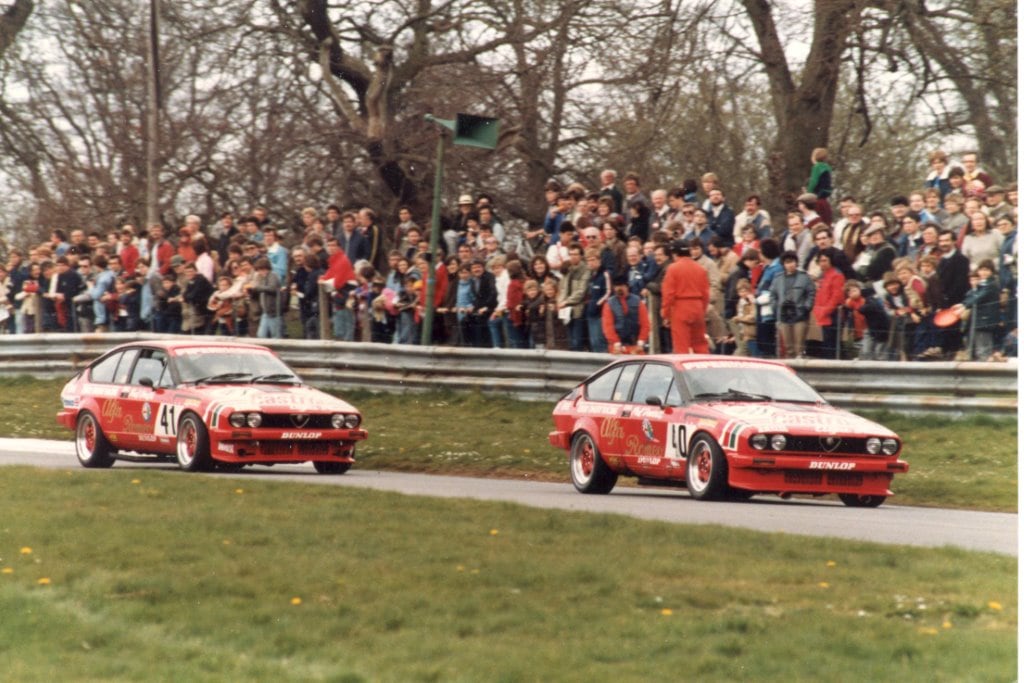 The highly regarded  Italian monthly “Quattroruote” recently reported some highly encouraging news about the future of the Alfa Museum at Arese. It seems that the bureaucratic hurdles that were in the way of the development and re-opening of the site have now been removed and work will begin in October with the intention of completion next summer. This is a really welcome development as although cars from the Museum have been attending events such as the Goodwood “Festival of Speed”, the main part of the extensive collection has been locked away. Part of the agreement is apparently that no cars can be sold which means that the museum will remain intact.

How the Alfa Museum complex at Arese should look when completed next year.

Our recent visit to Anglesey confirmed that the Welsh Circuit’s commentary box on top of the new Race Control building has one of the best views of any in the country with just two minus points – one that you cannot see the cars after they have gone through Turn One on the approach to the banking hairpin and secondly, there is only one microphone and a very primitive one at that! There is little that can be done to improve point one but I would have thought that a better microphone or a couple of headsets could easily be sourced for a miniscule outlay compared to what must already have been spent on this fine (and now much used) venue. 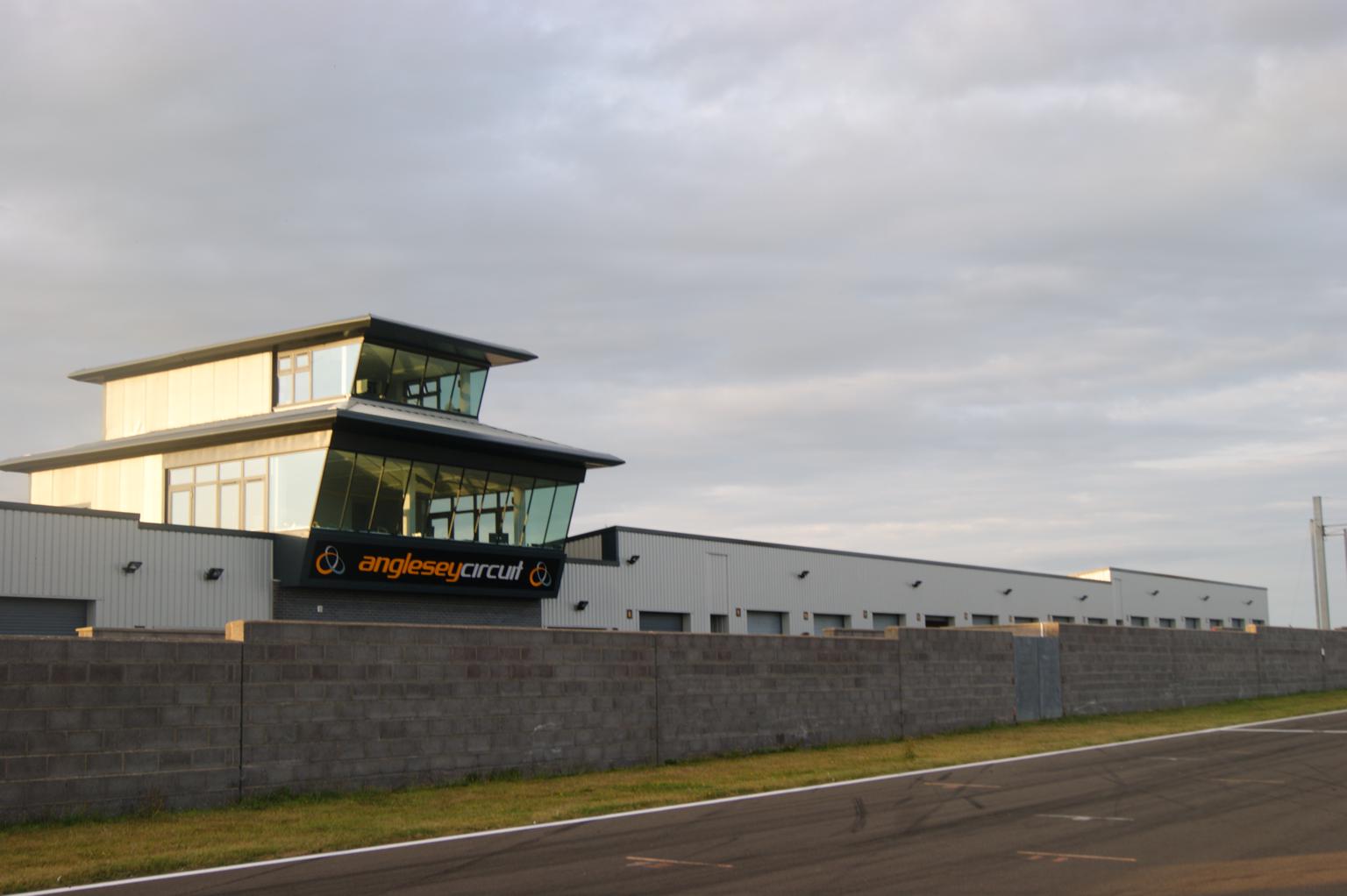 Class F champions Mark Ticehurst (1995 & 1996) and Simon Fish (1990) are enjoying a return to success in two different spheres of racing although both with cars that are somewhat more powerful than the 33 and Sud Ti they raced in their Alfa days. Mark went through a period as test driver for the then Vauxhall equipped Triple Eight teams before becoming a works driver for Mazda in events like the Britcar 24 Hours. He now races a flame spitting Porsche 935 in the Classic & Sports Car Club Special Saloons and Sportscar series and recently followed his domination at the Mallory Park re-opening meeting in July with a couple of wins a two weekends ago at Donington. Simon Fish, by contrast, has gone down the single seater route after a period in Radicals. He now races in the Masters Historic F1 series with a Cosworth V8 powered Ensign N180 and has scored a number of second places, including at the Nurburgring during the “OldTimer Grand Prix” meeting (August 9th/10th).