Many of us will remember where we were on that fateful weekend twenty years ago. I was at Snetterton where the factory 155s were competing in the BTCC, albeit under threat of a protest from Ford over the eligibility of their front and rear wings. AROC’s regular touring car correspondent John Elwin wrote the following for the Club magazine –

“Post race celebrations were somewhat muted – commentator Brian Jones gave a very moving tribute to Ayrton Senna and Roland Ratzenburger on the podium, followed by a one minute silence, during which you could have heard a pin drop. It should also be mentioned that both Alfas (of Gabriele Tarquini and Giampiero Simoni) wore a black armband across the corner of the bonnet, simply inscribed “Ayrton and Roland Imola 1994”. Gabriele has raced against, and knew both drivers well. Compare with such happenings, whingeing about wings seemed rather insignificant”

It was very sad to hear of the death recently of Giorgio Pianta who had spent a major part of his life with the competition side of the Fiat Group, much of it as a test and development driver for Abarth and Lancia before moving to Alfa. Among the most successful projects with which he was involved was the Fiat 131 Abarth with which Walter Rorhrl won the 1980 World Rally title. He then went on to develop the Lancia Rallye 037 and Delta Group B cars but in 1986 Fiat took over Alfa Romeo and Pianta was moved across to enjoy a 10 year stint running Alfa Corse where he enjoyed even more success. In particular there was Nicola Larini’s 1993 DTM title in the 155 V6 Ti, taking ten race wins on the way to team mate Alessando Nannini’s two. Pianta was also particularly pleased at Gabriele Tarquini’s success in the 1994 BTCC. For reasons that were never entirely clear, he left Alfa at the end of the 1996 season although he continued working with the CSAI. Although Pianta is best remembered for his development and managerial work, it should be forgotten that he was also a very talented driver in his own right, scoring many successes including 3rd place with an Osella in the 1977 Targa Florio and outright win in the 1978 Giro D’Italia sharing with Markku Alen.

All registered competitors and others associated with the championship should have received a letter from our Championship Co-ordinator Drew Furlong regarding compliance with rules concerning social media. This is a subject which we should all take seriously and if you think you should have had a copy of the letter but have not, please let Clive Hodgkin know so that you do not fall foul of our regulations and those of the MSA.

25 and counting – Women in the Alfa Championship.

The arrival of Stacey Dennis at Silverstone last October as the twenty fifth woman driver to race in the championship, once again brought queries from several people (not for the first time) about “who were the other twenty four then?”. I thought I might take the opportunity to list them, in roughly chronological order. I hope it brings back a few memories.

Linda Colvill – wife of Bell & Colvill’s Martin Colvill. Raced a genuinely straight out of the showroom Alfasud Ti for her one and only race at Brands Hatch in 1982.

Mary Elliott – shared an Alfasud Ti with her husband Hugh in 1989 and 1991. Later went on to race in Formula Ford.

Sally Bishop – raced a Modified Alfasud Ti owned by Nigel Cottee in 1988 and 1989 before sharing a Class F Alfasud Ti, sponsored by Thorn Security in 1990 with Paul Edwards. 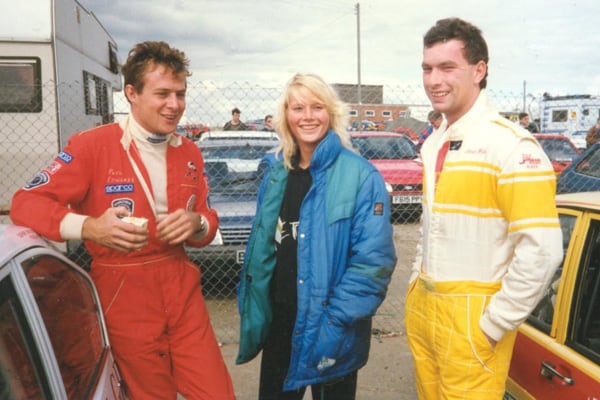 Jane Cheffings – started racing in 1992 with an Alfasud Ti before moving on to 164 3 litre with which she had several successes before writing it off at Oulton Park in 1995. Was still 3rd in the old Class D that year. 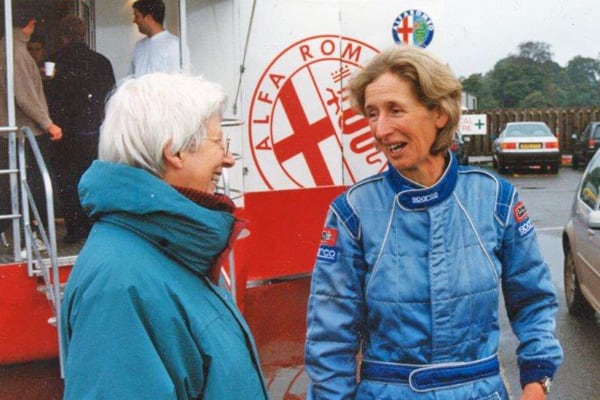 Barbara Wrighting – raced a 33 occasionally between 1997 and 1999 before handing the car over to her son Paul Winter.

Rebecca Draper – was an occasional competitor in 2003 and 2004 with an Alfasud Sprint prepared by Bianco Auto Developments. Placed 2nd in Alfasud Cup in 2003.

Mel Healey (Freeman) – started racing in 2002 with an Alfasud Ti before moving on to a 33 in 2004 with which she won Class D in 2009. In 2010 started racing a 156 in Class E and became our first woman OVERALL CHAMPION. After having two children, Mel will return to racing in 2014, now under her married name.

Emma Karwacki – after racing a Sud Ti in the Auto Italia Championship, Emma switched in 2004 to a 33 prepared by her partner Neil Smith. Was 2nd in Class D in 2008. A Class E 147 really brought her to the fore in 2011 when she became our second woman OVERALL CHAMPION.

Louise West – daughter of Peter West who used to run Westune and also prepare Alfasuds for Alfa Romeo Dealer Team, Louise has raced Class B or A2 33s on and off between 2008 and 2013.

Bryony Snowdon – drove her father Chris’s 75 3 litre in 2010 and 2011 before deciding to her concentrate on her business as a beautician.

Roz Shaw – competed in one double header meeting with us a Silverstone in 2013 in her GTAm.

Stacey Dennis – first raced in October 2013 on the Silverstone International circuit as part of the Bianco Auto Developments team with a Class E 156. Plans a full season in 2014.

I came across a photograph the other day of an AROC Six Hour Relay Team taken at Silverstone in 1984. 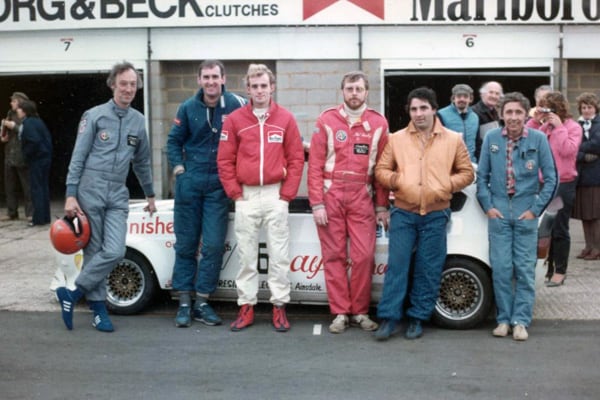 The drivers who made up the team (left to right) were Paul O’Hanlon (GTV6), John Liddle, Nick Sismey and Phil Rowley (Alfasud Ti’s), Pietro Cacciaviello (2000 GTV) and John Timpany (2000 GTV). John Sismey can just be seen in the background. It made me wonder why we don’t raise a team any more for this splendid event which takes place these days on the Silverstone GP circuit, still under the aegis of the 750 Motor Club. One of the reasons is probably that the race runs on the last weekend in October, only a week after our final championship round on the International track at the same venue. However, if anyone is interested, please give me a call on 01223-891219.

Robin should have a new toy to play with at Donington next weekend in the shape of a GTA engine 156, running in Class A1, prepared as ever by Avon Racing. This doesn’t mean that the 75 3 litre is being retired and we shall probably see it in Clive Hodgkin’s hands again later in the season. Who knows, Robin and Clive might even be on track together again! The last time was at Oulton Park in 2012.

Class A1 looks as though it is steadily getting stronger. At Donington we shall have 7 in the class with championship points leader Guy Hale (147 GTA) being joined by Graham Seager (GTV s/ch), Barry McMahon (156 1750 s/ch), Anthony George (156 Turbo), Andy Robinson (156 3.8 V6), Ian Stapleton (GTV6 3.8) plus the 156 GTA of Robin Eyre-Maunsell mentioned above. A2 will have a sole representative at Donington – Nick Anderson’s 33 8v.

Vincent couldn’t quite get his Class A1 156 race ready for Donington as it needs its engine management system sorting. However he is hopeful that it will be at Oulton on May 31.

Les Latham has e-mailed us to say that Darelle Wilson “has secured sponsorship from ATTAKK Pro Mods, an eBay shop that supplies all things related to fuel to many top teams in NASCAR, World Sport Cars and European GT plus a few we are forbidden to mention!! Check out their eBay shop for fuel pumps, lines, filters and fittings.”

Phil e-mailed the other day with news of the 75 Twin Spark that he is preparing under the current Class D regs. It has just returned from Avon Racing where the torsion bars have been re-set to get the ride height “more in keeping with racing”. Phil thinks it is all worth doing as it is a rust-free example but he may not end up racing it until next year as it is already over budget. “Not that it will matter as it will be just for fun this time”