Guy Hale e-mailed me the other day to say that he planned to do more racing this year with his 147 GTA and indicated that he would be at Silverstone where he and preparer Neil Smith were seen testing recently. Guy also intends to race his 33 16v, taking part in three Classic Sports Car Club Tin Tops races.

Class E prospects: So what will the 2014 pecking order be? With a 15 car entry for the first meeting of the year, it looks as though the class is going to be very hotly contested throughout the season but maybe we already have the odd indicator for the opening races. Bianco Auto Developments’ recent testing at Brands saw James Bishop below the lap record in his 156 and as he has a full season planned, it is clear that he is going to be mounting a strong challenge to 2013 class champion, James Ford. Running quickly as well was newcomer Steve Potts in the ex Emma Karwacki 147 while we can’t discount Tom Herbert and his rebuilt 156. Andy Hancock is something of an unknown quantity but whatever else occurs, his car will be winning prizes for its attractive presentation, carrying prominent “Grove & Dean” logos.

Bianco may have the largest share of Class E but there are plenty of other potential podium finishers. If Andy Inman is having an “on” day with the ex Paul Buckley 156, he will be a strong points scorer, likewise the similar 156s of Chris Healey and Dave Messenger. But I fancy seeing Tom Eastwood starting his season with some good results particularly if we have the odd rain shower. The entry of Luther Blissett for Silverstone brought Class E to 15 cars. I haven’t checked through the archives but I reckon our previous class E best was 14. So well done to all concerned!

Ian Brookfield’ 164 at Silverstone: Having seen how well his 164 went in the hands of Matt Daly on the Silverstone International circuit in October, it didn’t take much persuasion to get Ian back in the car for the opening two races. If all goes well, we hope that there will be more appearances during the rest of 2014.

Goodwood Members’ Meeting: My first visit to Goodwood was on September 18th 1948 for the opening meeting there but after that I was a regular visitor to both the major National and International meetings and also the very popular Members’ meetings, including the very first one on August 13 1949. Everything was so different in those early days – petrol was in short supply and members’ meeting races were 3 or 5 lappers and all handicaps.

“the car enjoyed an excellent weekend, punching well above its weight against some fabulous pieces of kit”

Nonetheless there was plenty of enthusiasm and it seemed logical for Lord March to use the members only format as the loose formula for his extra Goodwood event last weekend (March 29/30). No handicaps though and the races rather longer! Among those attracted to the two race/two driver Gerry Marshall Trophy was Chris Snowdon who, as reported in the last News & Gossip, had decided to build up a new GTV6 in 1982 Alpilatte colours that he would share with ex F1 driver, Rupert Keegan.  Despite a few last minute alarms, including leaking split rim wheels, the car enjoyed an excellent weekend, “punching well above its weight against some fabulous pieces of kit” according to Chris. Certainly true when you looked at the quality of the opposition that included Rover 3500s, Ford Capris, Mini 1275 GT, Mazda RX7s and a Chevrolet Camaro.  Chris qualified the GTV6  12th amongst the 28 runners but made his way up to 8th on the very first lap from the fifth row before finishing a fine 7th, setting fifth quickest lap of anybody in the process. Rupert Keegan took over for the start of the two driver race 2 swapping with Chris after 11 laps when lying 11th.  Chris was then able to bring it home 8th after another strong drive. The only problem they had was with the rear brake balance and the interior mirror falling off thanks to some substandard Ford tape! Further down the field Stephen Chase was sharing his Napolina Alfetta GTV with Richard Attwood and they too had a totally reliable couple of days, albeit outclassed for outright speed.

All in all Chris reckoned it had been a fantastic weekend, with far less pressure than the Revival meeting. One amusing item can be found  in the 1949 programme – “the entry fee for each event is two guineas”. Even with changing monetary values, Happy Days!

Moto GP: From conversations I have had with many ARCA members, there is plenty of support for Moto GP, and over the years Alfa has been involved with both safety cars and sponsorship, including that of the Ducati team. This year, however, they have a personal sponsorship deal with top rider Jorge de Lorenzo, Valentino Rossi’s team mate at Yamaha. This includes Alfa decals on his helmet and overalls, personal use of a 4C and a Giulietta QV for use by the team, and Jorge was seen at Balocco test track recently sampling Alfa’s current range. Other appearances for a 4C this year will be as Safety Car for the World Touring Car Championship. Not quite the same as having a works team out there but better than nothing I suppose. 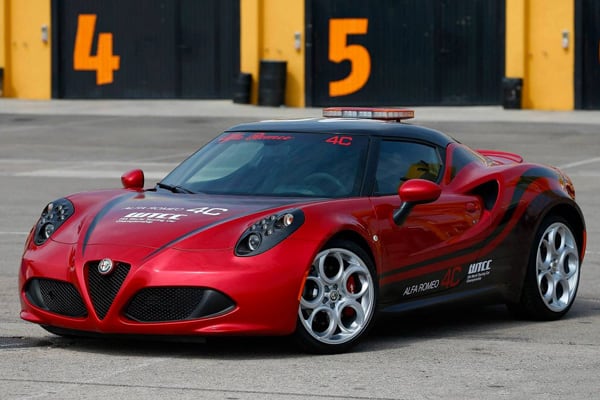 Proalfa: Good to know that Proalfa will be back with us in 2014 and Darelle Wilson will be running the Diesel GT at the opening meeting. Remembering his race last year to 4th place between Roger Evans and Clive Hodgkin from the back of the grid, we can expect some good results this time, reliability permitting. Other exciting Proalfa news is that their Mito should be ready for Donington. More on this in due course. Associated with Proalfa in 2014 will be Dave Peddie and Kritian Leith who has bought Dave’s familiar 145. Dave’s own plans are not clear right now.

Museo Storico News: Towards the end of last year there had been strong hopes that plans to formally re-open Alfa’s Museo Storico this summer would come to fruition in time for the Milan Expo in October. Sadly government bureaucracy has once again intervened and no decision is likely to be taken until October at the earliest.

Roger McMahon tells us that he will be racing his Fiat Punto with us again this year in the Invitation class. The car is currently being given a new colour scheme and the first outing is planned for Donington in May, following by Cadwell.

Ted Pearson duly enjoyed his debut Classic Formula Ford outing with his Crossle at Donington (March 20/21). After qualifying a splendid 7th in a 32 car field, he found the races harder work with an unplanned visit in and out of the gravel included, but was nonetheless rewarded with 13th place finish on Saturday and 11th on Sunday