Since our last Friday Fix there have been three Grand Prixs- British, German and Hungarian – with mixed fortunes for the Alfa Romeo team, set against the background of three of the most memorable races of the season.

The Formula 1 circus is now on a four week break but there is still plenty to keep us interested. Formula W reaches its climax this weekend at Brands Hatch while a week later the Alfa Championship will be at the same circuit for Festival Italia.

More Ups and Downs for Alfa Romeo in F1

There is no doubt that Kimi Raikkonen’s presence in the Alfa Romeo team has allowed an element of satisfaction to prevail, whereas Antonio Giovanazzi is still in the learning phase, not helped by mechanical malfunctions, engi neering errors and sheer bad luck. At Silverstone, however, it was Giovanazzi – who seems to have a strong UK fan base, who pipped Raikkonen in qualifying although neither reached Q3. They would start 11th and 12th with a free tyre choice. The race saw both drivers heading in opposite directions – Kimi to an eventual 8th place finish (and more useful points) while Antonio gradually dropped down the order, not helped by running wide at Brooklands before a wheel rim broke and tossed him into the gravel at Village. The produced the unwanted result of a safety car which would affect the outcome of the race by giving Lewis Hamilaton’s Mercedes a clear run to the flag when he was able to take advantage of a “free” pitstop.

The Silverstone race had certainly produced a more exciting race than that two weeks before at Paul Ricard but this was to be nothing compared to the German GP at Hockenheim. This was almost entirely due to the ever changing weather conditions which had everyone in and out of pits like yo-yos and produced a second win of the year for Max Verstappen’s Red Bull-Honda. Kimi Raikkonen enjoyed a fantastic qualifying, getting the C38 into Q3 and ending up 5th for a third row start. Giovanazzi just missed out on Q3 and would start 11th. This, and fine performances by both drivers in the race should have left them 7th and 8th, for a double points finish. But this was all to no avail as the cars were subsequently given 30” penalties for breaches of the clutch setting/start regulations. A big disappointment!

And so on to Hungary a week later and totally different weather. Here Raikkonen once again managed to get into Q3 and qualified 10th. Giovanazzi set a time that would have been good enough for 14th on the grid but a three place grid drop imposed for impeding another car. Coming home 7th and keeping a delayed Valtteri Bottas at bay was an excellent result but Giovanazzi had a poor afternoon finishing a lap behind his team mate. After missing out on points in Germany, which dropped Alfa to last but one in the Constructors’ points table, Raikkonen’s efforts moved them back up to 7th, although only 1 point clear of Racing Point.

With the first half of the seasonout of the way, there have been a couple of important changes to Alfa’s technical team before racing resumes in Belgium at the end of the month. Simone Resta who had moved from Ferrari to be Alfa’s Technical Chief has now left the team to return to Maranello and is now on “gardening” leave. His place alongside Luca Furbatto, who was mainly responsible for the C38, has been taken by Jan Monchaux, previously head of aero.

I was very sad to hear of the recent death of Bob Ridgard at the age of 77. Bon compete in the Alfa Championship between 1992 and 2000, always with an Alfetta GTV in Class E. A particularly notable year was 1996 when he battled to a Championship class win against Paul Buckley’s 75 Twin Spark with some of the closest finishes ever seen in our races. Typical was when I reported from Oulton Park (Fosters circuit) in July – “in Class E the usual battle royal waged between Bob Ridgard and Paul Buckley………Bob ‘s winning margins on this occasion were 0.10” and 0.39”! Bob was particularly proud of his achievements that year, taking other class wins at Snetterton, Cadwell, Mallory and Croix-en-Ternois, The previous season he had been runner-up in the class before finishing 3rd in 1997, after which he started to wind down his involvement. Several of the 1996 races are on Paul Buckley’s in-car videos, including Bob’s notorious Snettertton start, and we hope to be able to put them on the new website video archive in due course.

Before he became involved with the Alfa Championship Bob had raced numerous other makes, including a Chevrolet Camaro in the Souther Organs Saloon Car Championship (what is now the BTCC), a Mk1 Jaguar, Escorts and a Porsche. More recently he had been racing an MG B on occasion. However, all this was mainly a hobby as in 1974 he set up Ridgard Seats not far from me in Linton to provide competition seats for several factory teams. Later he decided to concentrate on beautifully crafted seats for classic cars by which time he had moved to a workshop in Ridgewell near Haverhill which became his permanent base. When things became difficult in the classic car field he added making metal garden furniture to his activities, always making the point that everything was hand crafted from solid steel “instead of inferior tubular and plastic products”. Although I have a copy of his impressive colour brochure, I never took advantage of his offers, which I regret now as it would have been a reminder of a genuinely talented and nice man. I am indebted to Micky Bolton for giving me more information about Bob, Micky having met him in 1975 at Brands when he had ended in the gravel, bringing out yellow flags that affected the final outcome of that year’s title in favour of Andy Rouse.

Bob was always someone who you could rely on for a firm opinion and in my time as Championship Co-ordinator, I would often have long conversations with him about the technical regulations about which we didn’t always agree. But then Micky would say that he “was being his normal belligerent self”!

Our condolences go to Bob’s long-time partner Kate, his daughters Lucy and Claire, his family and many friends. He will be greatly missed.

Assen is well known to Dutch Alfa enthusiasts, and there was a lot of support for Formula W when it visited the circuit at the end of July, for the penultimate race in this year’s Championship, as usual running as part of the DTM programme. There was yet another winner as Emma Kimilainen, who had missed several rounds after an accident in round 1 at Hockenheim, produced a scintillating performance to win from Alice Powell and Jamie Chadwick, the latter importantly keeping ahead of title rival Beitske Visser. As an experiment, there was also a hotly contest reverse grid non-championship race the following day, won by 18 year old Megan Gilke.

Jamie Chadwick now goes to Brands Hatch for the Championship final this coming Sunday (make a note – not Saturday), still leading Visser by 13 points. It should be a monumental tussle for the $500,000 first prize in which several other drivers may well play a role. Jamie will be on home ground and she knows the wrinkles of Brands extremely well but Formula W is very unpredictable. This is an opportunity (if you want it) to see 20 Tatuus single seaters, all fitted with Alfa Romeo engines. If you prefer to stay at home, tune in to Channel 4 at 2.30 to watch from the comfort of your own armchair!

Formula W management have confirmed that the top 12 in this year’s Championship will have guaranteed entries for next year, those contesting the other 8 slots having to go through the same selection process that took place before this year’s races.

Andy Robinson or Keith Ford will be writing their preview of the Alfa Championship races at Festival Italia at Brands Hatch over the next few days but I couldn’t let the moment pass without welcoming back old friend Martin Parsons who raced with us between 1987 and 2001. Although he never won the Championship overall he had many successes including class F championship wins in 1991 and 1994 with Alfasud Ti and 33 respetively. In the latter year, he was also 2nd overall, only being beaten by Chris Snowdon’s GTV6.

He then went on to race 164s and although he had several class wins, he never did a full season before moving on to endurance racing in a variety of cars with Brunswick Motorsport including a 147 Diesel. When I had a conversation with him recently, he insisted that he had definitely retired, only to pop up on our Festival Itala entry list and in one of the BRSCC’s new 45 minute Clubsport races at Brands Hatch where he finished a splendid 7th on a damp track in a 34 car field, driving the familiar Bianco prepared “Grove & Dean” 156. Good luck at the Festival Martin!

Prolific model makers Tecnomodel have just announced that they are producing limited edition 1/18th scale models of the Alfa Romeo 159 GP car. They are offering examples as raced by Juan Manuel Fangio in the 1951 Swiss GP, Nino Farina in Spain and Paul Pietsch in Germany. These look fantastic in the Diecast Legends catalogue. However as usual these days, you will need deep pockets as the price is £249.99 and the number of each versions is severely restricted. But is you can’t resist, take a look at the www.diecastlegends.com

The emergence of Formula W served as a reminder of several one-model championships in which Alfa have been involved, notably in the Alfasud era, but few have been for single seaters. It is interesting, therefore, to recall the “Campianato Italiano Formula Alfa Boxer 1987” which incorporated a division for drivers under 23 years of age. Today, that would probably be the whole field! 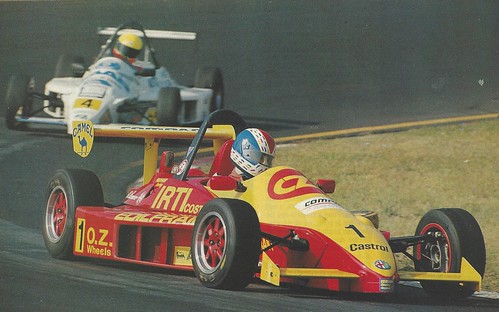 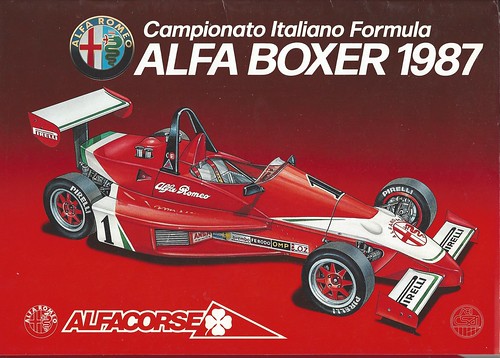 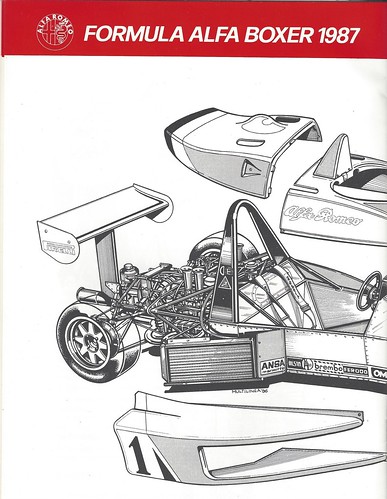 The chassis, suspension and brakes on the car were all fairly typical of the time, and whole was clad in a smart fibreglass body. A 33 1.7 Green Cloverleaf 8 valve engine was used, in Groupd N spec, mated to a Hewland 4 speed gearbox. 7” x 13” wheels were fitted with Pirelli slicks. A 12 race season was planned for 1987, visiting all the major Italian circuits – Vallelunga, Mugello, Imola, Monza, Enna-Pergusa and Misano. Two of the races on the calendar were on the programmes for the Italian and San Marino Grand Prixs. So quite prestigious!

Alfa put their weight behind the Championship for a couple of years and it then moved into the hands of commercial sponsors, the engine being upgraded to the 16v version with 140 bhp available, for the 1991 season. Although there were plans to continue in 1992 with a free chassis formula, it quickly fizzled out. In the five years of its existence, Formula Boxer was well supported in terms of numbers but no stars of the future seem to have used it as a staircase to better things. I wonder if any of the cars still exist. 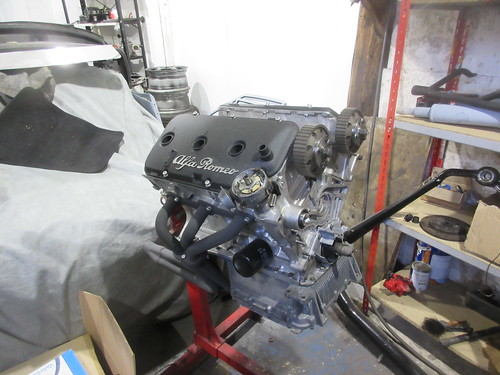 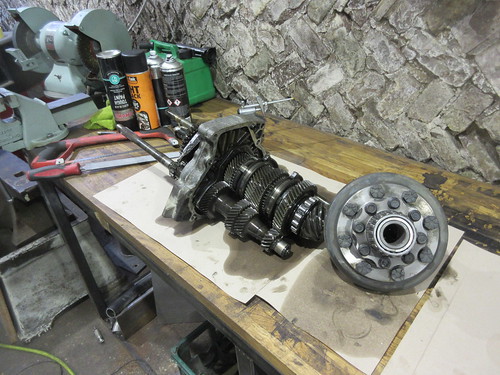 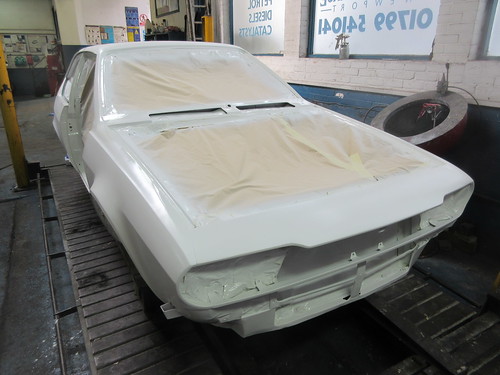 John West GTV6 to be

There were hopes that we might be able to organise an Alfa Romeo Dealer Team re-union, to include demonstration runs, at this year’s Festival Italia. Unfortunately, several of the cars that are in the process of re-construction, both originals and replicas, were just not going to be ready and so we have decided to put it off to 2020, hoping that Festival Italia will continue into another year. One of the cars I have been keeping an eye on is the GTV6 being built up by Harry Kirby, son of Rob, which will be in the 1985 John West livery. The shell has now been sprayed by Rob and middle son, Lawrence, and it looks immaculate inside and out, Engine, gearbox and suspension are all in the Premier Garage workshop waiting to be fitted. Can’t wait to see it all up and running!