The major Alfa Romeo news over the past week would have been that of a possible merger between FCA (Fiat Chrysler Automobile) and the French giant Renault. On the Italo/American side this would have involved the Fiat, Alfa Romeo, Maserati and Jeep brands while Renault have strong links with Nissan. At present if you put FCA and Renualt together , you would have the third largest company behind VW and Toyota and ahead of General Motors and Hyundai Kia, selling a total of 8.7 million vehicles in 2018 as against VW’s 10.8 million. VW also has a far larger revenue stream of £208 billion as against a potential £147 billion for FCA/Renault. As regards the number of employees VW numbers are almost twice those of a combined Fiat/Renault. That might indicate some slimming down to come within the German conglomerate. The Chrysler part of FCA has been down this route before, in 1998, with Daimler-Benz which was aimed at increasing foothold in the US. This came to an end in 2007 and two years later Fiat took a 20pc share in Chrysler, paving the way for an ultimate combination which came to pass under the auspices of that fearsome negotiator Sergio Marchionne. Sadly, Marchionne died in 2018 and we may never really know whether a big tie-up with Renault/Nissan was ever in his mind. However, the arrest of Renault/Nissan boss Carlos Ghosn in Japan and the likelihood that he will face trial for fraud would undoubtedly have raised the possibility. A £29 billion equal split was proposed On a thoroughly pessimistic note, Michael Dwyer in the Daily Telegraph Business News heads his article “History of Car tie-ups shows there can be only one driver: Fiat must learn from the example of the ill-fated Chrysler-Daimler merger before it presses ahead with the Renault deal”. And don’t forget that they are dealing with President Macron’s government and Renault is 15% government owned. It hasn’t taken French Finance Minister Bruno Le Maire long to convince Fiat that the correct political conditions do not exist for the merger to reach first base. That may not mean the idea is dead for ever but FCA will undoubtedly be looking for a more sympathetic partner – if there is one in this day and age. For the moment though, the idea has gone back into storage.

As far as our major interest, Alfa Romeo, is concerned who knows what the outcome might have been. The company’s products have moved up market with the Giulia and Stelvio, well away from the cars that drew so many happy enthusiasts as owners in the days of earlier Giulias and Giuliettas, and the Alfasud and Alfetta. Without those cars, the majority of us would probably have been driving other marques. Renault produce many more humble models but I can’t see the combined company switching their attentions to Renault based variants with an Alfa Romeo badge. Having said that, the historians amongst us will be recall the Renault Dauphine that was produced in Alfa Romeo’s Portello (Milan) plant for sale in Italy. It was launched on June 4th 1959 and stayed in production until 1964. There was an up-market version, the Ondine, built between 1961 and 1962 and Alfa also built two Renault 4 models – R4 Berlina and R4 Limousine. They all used the original Renault 845cc engine, developing a wonderful 26.5 bhp but had 12v rather than the original 6v electrical systems.

Alfa had a pretty tough time in Monaco and both their drivers ended the weekend at the bottom of the “Autosport” driver ratings. Having said that, practice on the Thursday didn’t seem too bad with Giovanazzi just heading Raikkonen in FP2 in 8th place and ending an excellent 6th in FP3 on Saturday morning. In qualifying it all went wrong as the two cars just got into Q2 and were then pitched out at the bottom of the times. Raikkonen would start a lowly 14th with Giovanazzi shuffled back to 18th with a three place grid penalty for impeding Nico Hulkenburg’s Renault at Rascasse.
In the race Kimi got shuffled back by the two Racing Points and spent part of the race holding up a queue of cars before his pit stop, coming home in his 300th Grand Prix a dire 17th. For Giovanazzi it was even worse as he clattered into Robert Kubica’s Williams and was given a 10 second penalty and 2 points on his licence, finishing two laps down, effectively last. After the race Raikkonen said that “there is nothing major wrong with the car. We just lack speed”. Sounds pretty basic to me! Only Charles Leclerc can have a had a worse day in his Ferrari. Let us hope for a brighter story to tell after Montreal.

One wonders how much the team were aware of the impending news of a possible link-up beween their parent company and Renault. What effect might it have had on the future of Alfa’s new Formula 1 team and only just half way through its first year, and on its drivers Kimi Raikkonen and Antonio Giovanazzi. There were rumours getting ever stronger that their chief designer, Simone Resta, would return to Ferrari to help bolster the engineering team at Maranello. All pretty depressing really and not calculated to regain the momentum that the C38 had lost in the past few races.

News that Bianco Auto Developments were moving to new premises, just down the road to Shipley Bridge (close to the Gatwick Airport glidepath), came through bit by bit as the first months of the year progessed. But it was the announcement of an Open Day on Sunday, May 26th, which showed that it had all come to fruition and most of it was up and running! Without a doubt this is a major step up from what they had before – a large and airy workshop with four lifts and a rolling road (not quite operational as yet). There is also plenty of storage alongside, where the numerous race cars can be kept in safe and dry conditions. A bonus is a mezzanine floor above the workshop and this has been taken over for LMA products, Paul Plant and Emma Karwacki having bought the company from Stuart and Margaret Cumming and installed Tom Herbert to run it with Emma. 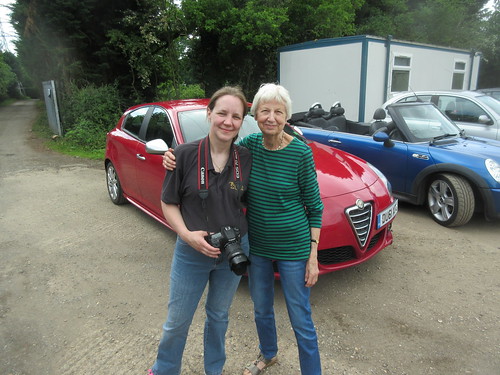 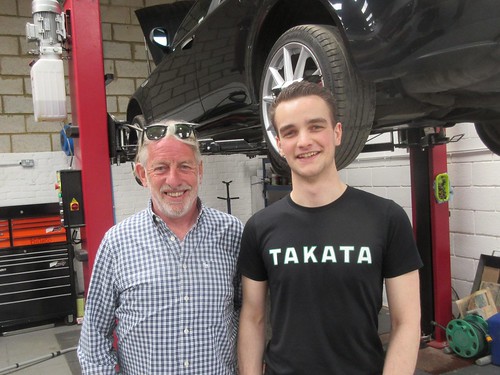 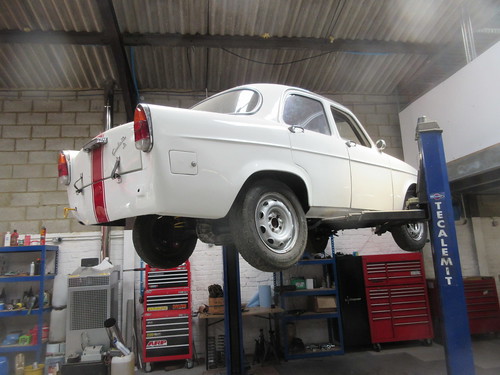 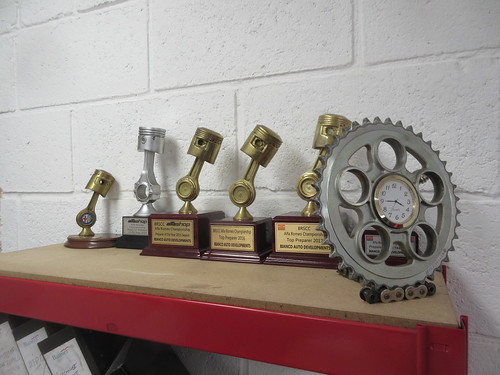 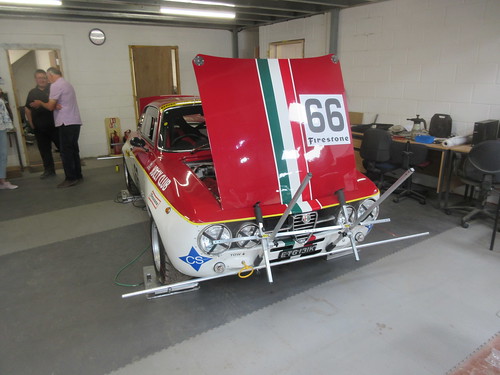 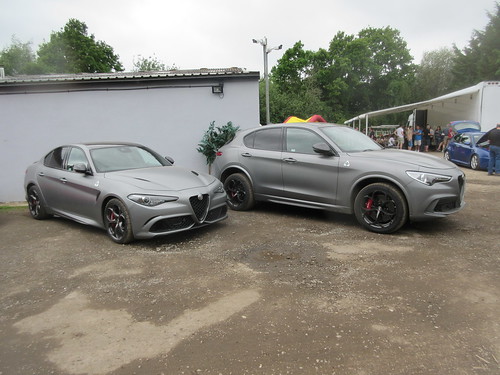 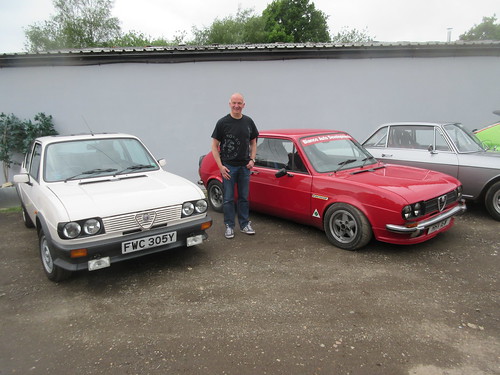 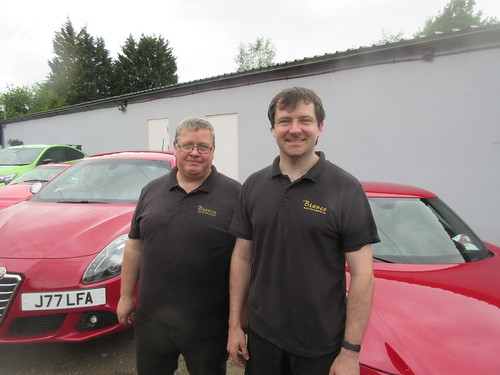 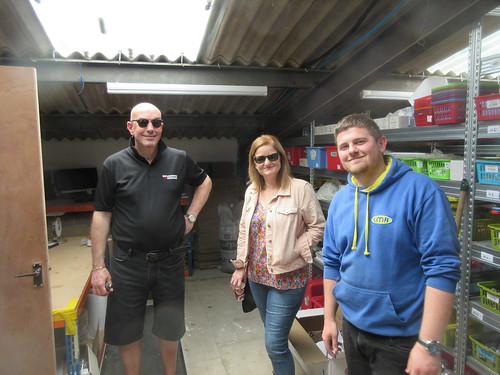 The Open Day was a great success and we were able to poke around in odd corners to our hearts content. All the current Bianco race cars were there plus one or two like John Symes’ Giulietta Ti which he hopes to race in the future. Riccardo Loselli’s 4C was on display, complete with new roll cage, but plans to race it in the Alfa Championship have yet to have a firm date due the workings of motorsport. bureaucracy. It was good to see Tom, Vic and Linda Hill lending their support with Chris Finch, Mike Tydeman and Gary Orchard with his pristine Alfasud Ti sitting alongside his old race car that is now owned by Bianco, and many more. There were examples of the modern Giulia, Stelvio and 4C plus a very smart V6 engined 147 and several pristine Giulia 105s to be admired. A few of Bianco’s large collection of trophies were on display in the office.

We took the opportunity to look at the LMA part of the building and to enjoy the enthusiasm of Tom Herbert about this new venture having taken over all LMA’s previous stock and now keen to add to what the company has to offer. It all looked remarkably well organised to me.

Our thanks to Paul Plant, Harry White and Emma Karwacki, not forgetting Alex and Kurt who looked after us so well and plied us with ample food and drinks. We wish them all well in the years ahead.

This is just a taster before the full report which we hope to get to you next week. The original plan was that Thruxton was going to be the second of this year’s Classic Alfa Challenge races but organiser Julius Thurgood had the opportunity to run a full HRDC meeting at Lydden Hill the week before and decided to take it. It was hoped to run another Alfa only race there but the entry was small and was combined into “Stars of Lydden”.

Nonetheless, those who went enjoyed themselves and Alex Jupe, Jonathan Horsfield and Gavin Watson chased home our old friend “Ding” Boston of the Oxford Universities Motorsport Foundation in his Riley 1.5. It seems that a return to Lydden for HRDC next year is on the cards but on a more user friendly date. Micky and Ruth Bolton reckoned that providing food and drink for competitors two weeks running exceeded their exhaustion level!
Although the Thruxton entry was not quite up to the level of the previous Donington and Silverstone races it still produced some close and spirited racing right through the field in sometimes very tricky conditions. Chris Snowdon took another win in Richard Melvin’s Alfetta GTV but didn’t have it all his own way by any means and was pushed hard, and led several times early on, by Richard Merrell in his 2 litre GT Junior. Contact at the Club chicane demoted Richard and it was Alex Jupe who came through to finish 2nd in his “Marlboro” decalled Alfetta GTV ahead of the recovering Richard Merrell and Jonathan Wright’s 75 Twin Spark. All thoroughly entertaining. Pity there is such a long gap to the next one (October 5th Castle Combe).

Formula W returns this weekend with the third round at the Misano Marco Simoncello Circuit near Rimini, running alongside the DTM as usual. The track is very different to Zolder with longish straights and tight corners which will reward those who are good in the heavy braking areas. The weather should be dry and sunny, unlike the opening Hockenheim round. The opening practice session this morning saw the top 13 cars all within a second of each other, led by Zolder winner Beitske Visser with a time of 1’35.193”. Alice Powell, Jessica Hawkins and championship leader Jamie Chadwick were next in line. There is another practice session this afternoon, followed by qualifying on Saturday morning. The race can be watched on Channel 4 tomorrow (Saturday) at 2.45pm.

I am always delighted each month to receive “Victory Lane” which covers the historic and vintage racing scene in the U.S. It makes me realise how extremely strong the historic scene is over there and on many circuits of which we rarely hear. Mind you, when I look at some of the photographs, I wonder about safety standards occasionally with trees still protected by straw bales! Of course, when I came to look at the latest issue, everything was fine with a grid of Alfas racing at the well known Road Atlanta circuit in Georgia. An interesting picture shows Joe Colsacco’s yellow TZ leading a selection of Alfas that includes a rare ex Dany Snobeck French championship GTV6 2.5.