Having an Alfa Romeo in the gravel soon after the start of Day 1 of the Barcelona tests wasn’t exactly what the team, or Kimi Raikkonen for that matter, hoped for. Luckily, there was no serious damage and Kimi was soon able to redeem himself as the day progressed. The C38 had already grabbed the attention of journalists and technical analysts present for its innovative approach to some of the 2019 aero rules while the new livery – a subtle modification of that seen last year – received general approval. Added to which it was amusing to see that the drivers were partly identified on their overalls by names of current production Alfas – Stelvio for Raikkonen and Giulia for Giovanazzi.

By the end of the first week of testing, Kimi Raikkonen had ended with the fourth best time behind Nico Hulkenburg (Renault) and the two Toro Rosso Hondas of Alexander Albon and the returning Daniil Kyviat. Giovanazzi finished 11th, about 0.75” slower than his team mate. Without going into details of each day’s running in the first week of testing, it is more instructive to take advantage of the analysis done by Gary Anderson in “Autosport” which takes into account adjustments for fuel and tyres. Here we had Alfa Romeo in 6th place behind Ferrari, Renault, Mercedes, Haas and Red Bull Honda .

In the first two days of the second week, it was all change with McLaren – in the hands of Carlos Sainz and Lando Norris on top for two days  and Vettel crashing the Ferrari.  Toro Rosso  were still well on the pace with Alfa 5th on Day 1 (Giovanazzi) and 4th on Day 2 (Raikkonen). Kimi reckons that after spending the first week just getting used to the car and the way the team works, he is now able to work on set-up. His final day in the car today might be interesting. Day 3 was better for Giovanazzi who set his best time of the test and ended up 5th. If it is reliability that is key, then Alfa Romeo did well, totting up 507 laps over the four days with only Mercedes (610) and Ferrari (598) ahead. With three days of week 2 completed, Alfa were up to a further 283 laps. Just before lunch on the fourth day Raikkonen came to a stop at Turn 2 and was returned to the pits on the flat-bed truck. At the time he was 7th fastest but unlike all those ahead of him had to still to try the softest (C5) tyre.

One thing that being a manufacturer team seems to bring is an increase in sponsorship deals and Alfa announced a number in Barcelona, the most notable of which is IVECO that will provide all the team’s trucks and support vehicles in the coming year. Then there is the Singha Corporation (no I hadn’t heard of them before) who are a privately owned multi-industrial company that, in 1933, founded Thailand’s first brewery. I suppose it was inevitable that Alfa would produce some special versions of their road cars mirroring the race car liveries but happily the end result is not too outlandish.

The rumour mill seems to be in full swing about who will be Alfa Romeo’s test and reserve drivers in 2019. Top of the list at present seems to be 19 year old Mick Schumacher, son of Michael. His main role for the year is in Formula 2 with the Prema Team but we could see him in a C38 at the next two day test after the Bahrain GP. There are two such tests during the year with two days having to include rookies. More seriously, if a third driver is ever required, Ferrari already have Brendon Hartley and Pascal Werhlein on their simulator roster, both with recent F1 experience. Sadly, all this probably means that Tatiana Calderon will not have a place with the Alfa team this year although she will also be in Formula 2 with HWA affiliated Arden, curiously run by the Horner family (Red Bull).

Update: Alfa Romeo’s Team Principal Fred Vasseur confirmed today that Tatiana Calderon will after all continue as an official reserve driver for 2019 and the hope is that she get mileage in the C38 at some point. “I love being part of the team” Tatiana said after the announcement.

It’s many years since I last went to Race Retro but with the sun shining in the days leading up to last Friday, the first of the Show’s three days at Stoneleigh Park, I thought it might be worth the effort. The Autosport Show has, in many ways, become less appealing as the years go by, so it was nice to find that Race Retro still had a genuinely friendly feel about it and provided the opportunity to meet up with several old friends. Prominent among them was Bob Dove who was responsible for the preparation of Jon Dooley’s 1981 1300 Class winning Alfasud Ti and later GTV6s and 75s. I hadn’t seen Bob for quite a while, so it was good to a brief catch up. I had a long chat with Jonathan Wright who owns both the John West Dealer Team 75s from the 1986/87 seasons. He told me that the ex Dooley car now has all its John West decals and was taken over the big Zandvoort Italian car event last year while the Rob Kirby car’s rebuild is making progress.

Also there was Richard Drake, who runs a Napolina liveried Sud that finished fourth (and should have been third!) in last October’s Donington Classic Alfa Challenge and Roberto Giordanelli and Jane Watson. I popped onto the 750 Motor Club stand to say hello to Competition Secretary Giles Groombridge in the hope that I might also meet up with Chris Tate but I had just missed him, However, Giles said that they had been talking about our 2002 visit to Croix-en-Ternois for the “Trans Manche” race weekend where they had both competed, Giles in a Class F 33 and Chris with an Avon Racing 75 2.5 V6. Cip Nistorica was on hand with one of his smart Turatello covered race car trailers, reporting good business at the “Autosport” Show and hoping for more of the same at Race Retro. I also bumped into Scott Austin who assured me that he will be at Brands Hatch for the first Alfa round although the car may still be to its 2018 specification, running in the Power Trophy.

There were plenty of interesting historic race cars at Race Retro to jog the memory but Alfas were thin on the ground although I did find Steve Dymoke’s pristine ex ETCC 156 on the Bugatti Owners Club/Prescott Hill Climb stand. Books and models galore were to be found on offer, tempting one’s wallet while “Auto Italia” had a stand manned by the ever enthusiastic Michael Ward (son of Phil) and the magazine’s ace photographer. The whole event is sponsored by “MotorSport” and their live stage appeared to be well supported, with a tribute to Barrie Williams taking place while I was there.

Entries are now open for the first of this year’s HRDC Classic Alfa Challenge races as part of the VSCC meeting on the Silverstone National circuit on Sunday, April 14th. It is actually a two day meeting but the HRDC events will only be on the Sunday. However, the VSCC always offers a fantastic programme of races for those who want a plethora of nostalgia and some amazing noises! The Historic Grand Prix Car Association will be putting together a field that will probably include a number of ERAs while the 31st Hawthorn Trophy race is being run for 1950s sportscars. 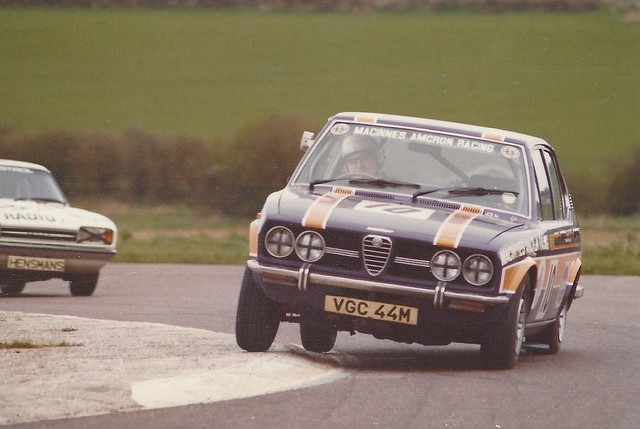 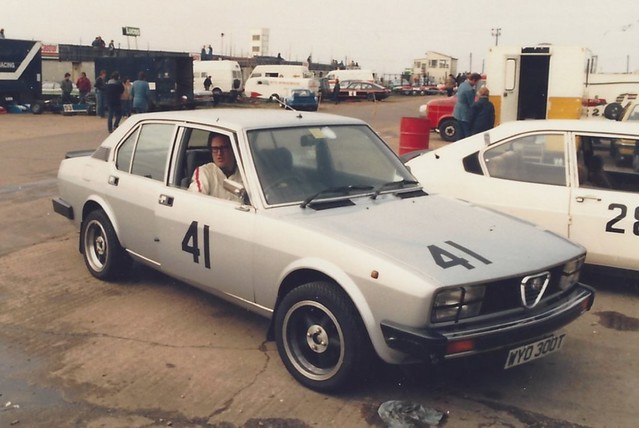 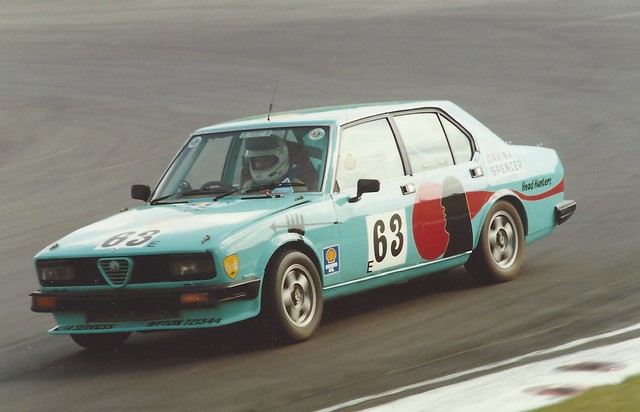 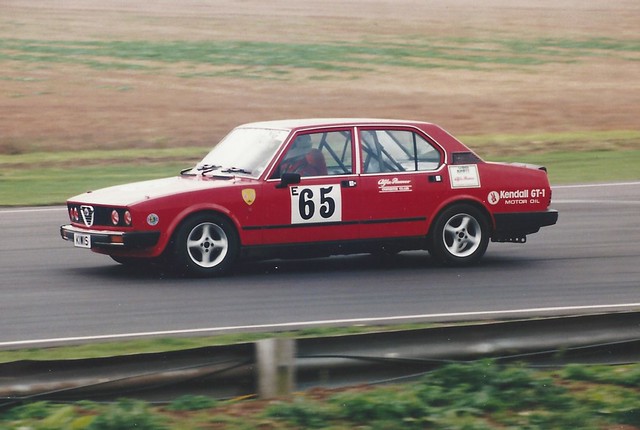 At the Donington meeting in October  there was a very wide range of models that ran from a 1900C SS through to Giulias and more “modern” Alfettas and Alfasuds. However, all the Alfettas were GTVs, and it set me thinking about  Alfetta saloons that raced at one time or another. Back in 1974/75 Jon Dooley raced a 1.8 example in Production Saloons but later we also had examples of the 2 litre version in the Alfa Championship. The smartest of the three cars that I have found photographs of was probably the red car of Mark Rumsey. Ed McDonough (and once, Jon Dooley at Donington) raced a turquoise car while Stephen Milne’s was a standard factory silver. Others were driven at times by Mike Barfoot, Leon Noel and Simon Brown.

Not quite what it seems!

In my perpetual delving into the archives I often come across the unusual – no different this week then! What connection is there between a Cooper-Connaught and Alfa Romeo? Well it came in the form of a car created by 1950s racer John Riseley-Pritchard. He wanted to fit an ex Mike Hawthorn Riley engine into what was basically a widened Cooper F3 chassis but it needed a body. Looking at an issue of “Autocar” he came across a picture of the “Disco Volante” and was so taken by it that he asked bodywork experts Wakefields in Byfleet if they could build him a replica. This they duly did but the Riley engine soon expired and was replaced by a Connaught unit with which Riseley-Pritchard was familiar, having driven a Rob Walker Racing Connaught A series single seater.

The resulting car had tremendous performance and despite poor brakes brought its driver enough success in 1954 to get him noticed enough to be offered a drive in the Aston Martin works team at Le Mans. Sadly, the Cooper-Connaught Disco came to a sad end when a mechanic at Rob Walker’s Pippbrook Garage took it out for a trial run and crashed it at high speed. Despite being thrown out the driver survived but the car was destroyed and probably ended up in the tip if noted historian Doug Nye is to be believed!

An unexpected find on the Horton Books stand at Race Retro was a newly published biography of Giorgio Pianta, written by colleague and engineer Sergio Limone and journalist Luca Gastaldi. This is a fascinating story of a man who dedicated his working life to motor sport, starting off by racing a secondhand Fiat 1100 in 1955 and then an Abarth Fiat 500. His first appearances with an Alfa was with a Giulietta Sprint in 1961 and then a Giulietta Ti, hillclimbing the following year. He then briefly tried Formula 3 with a Lola but was drawn to rallying with an Alfa and most famously with an OlioFiat 131 in the late 70s. It was probably with Lancia that Pianta first became noticed internationally, leading the development of the Delta S4 that was finally homologated in 1985. However, it is his connection with Alfa that most interests us, the takeover of the company by Fiat in 1986 leading to Pianta moving to become manager of Alfa Corse in 1987.

He immediately masterminded Alfa’s participation in the 1987 World Touring Car Championship with the 75 Turbo and I remember seeing him in charge at the Tourist Trophy at Silverstone that year. The 155 in all its various forms followed, bringing DTM, ITCC and BTCC success for drivers such as Nicola Larini, Alessando Nannini, Gabriele Tarquini and Giorgio Francia. A contemporary special edition of “Il Quadrifoglio” celebrating Alfa’s successes in the 1993 DTM in which it took both the driver’s and manufacturer’s titles, described “Papa” Pianta’s “low key, easy-going nature and ever present smile which represent only the surface personality of the undisputed leader of the Alfa contingent and hide the full picture of the man , determined and capable of making all the right choices”.

This comes out fully in the new book.  In more recent years, Pianta has been much involved in the search for new Italian drivers. There is so much detail here (with both Italian and English text), giving an insight into a long period of Italian motorsport history and it is both copiously and interestingly illustrated. At £30 a bargain!

So, it is already March 1st, and only three weeks to go before the opening rounds of the 2019 Championship. As Andy Robinson writes in his latest Paddock Bulletin, please hurry with both registrations and entries. It will all be here before you know it!