The Halo Proves Its Worth at Spa

Charles Leclerc must count himself very lucky indeed that the titanium Halo had been made mandatory for all formula 1 cars in 2018. Without it, only luck would have saved him from major injury as Fernando Alonso’s McLaren was launched over the top of his Sauber after being propelled from behind by Nico Hulkenberg’s Renault. Of all the many TV images, the one of impact and instant blurring from Leclerc’s on car camera was undoubtedly the most striking , as were the pictures of the paint erased from the Halo itself. When everything had come to a stop, there was a part of the Sauber’s bodywork, complete with full Alfa Romeo script, lying in the wreckage of the McLaren just to make the point! For Leclerc, it was the second race in a row that had ended on lap 1 after qualifying had left him on the sixth row of the grid, right in the middle of the trouble prone mid-field group. Happily for Sauber, Marcus Ericsson was on fine form and was able to take another top 10 points finish for the team in 10th place, following his 9th in Germany.

As yet there is no firm news about Leclerc’s future – remaining at Sauber, taking over from Raikkonen at Ferrari or moving to Haas. Conversations with journalists might lead one to think that he might not be unhappy with another year at Sauber as he knows that there will be more Alfa Romeo money and the latest Ferrari engines. On the other hand, he did test the current  Ferrari SF71H at a filming day at Monza in July. Perhaps this coming weekend will provide some answers, as the Italian Grand Prix has so often in the past.

As Andy Robinson reported in his Festival Italia race report, the Rockingham circuit and the large site that goes with it has been sold with the sad result that all motorsport activities there will cease at the end of the year. The probability is that it will all become a vehicle storage facility and a possible auction house on the lines of Bruntingthorpe. While it has never been the most popular of the venues we have visited in recent years, the loss of any UK circuit, as Andy says,  means that the pressure on existing tracks for dates will increase significantly and will result in a change of policy for some of the organising clubs. BRSCC have been used to running two or three events there every year, BARC six with MSVR, 750 Motor Club and CSCC taking one apiece. Then there are the newly instigated 24 hour races for the Citroen C1. BRSCC’s Dominic Ostrowski has already highlighted the need to look at circuits that have not featured on their calendar for some time, or only occasionally, such as Pembrey in South Wales which they have not visited since 2011. However, others clubs will be doing exactly the same thing and the bargaining this winter is going to be tight. For the Alfa Championship, it means that competitors may have to be prepared to visit circuits that we have tended to shun or have had poor entries in such as Castle Combe and Mallory Park. It is also very important that the last two meetings of our 2018 calendar produce good entries. Brands Hatch for Festival Italia was the best of the season with 19 and gave us some excellent racing. Andy’s plea at the end of his race report is certainly not misplaced and we hope that competitors will make sure we have a strong case in securing the kind of calendar we want in 2019. 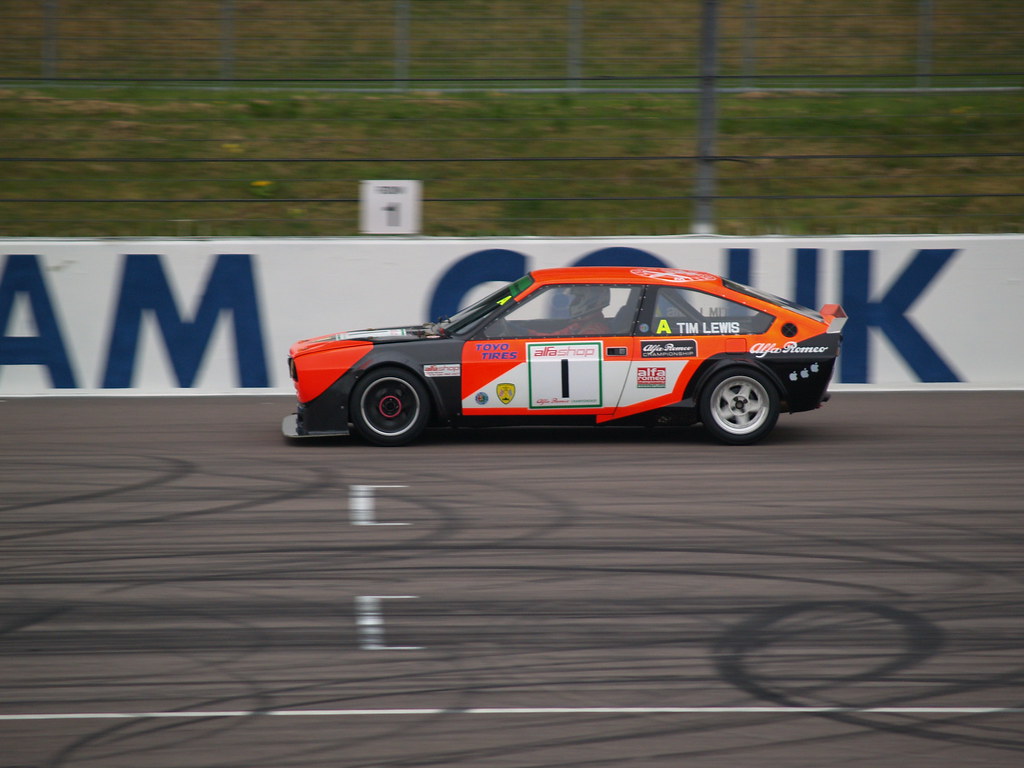 Looking back on our visits to Rockingham – 2018 will see our fourteenth visit, the first having been in 2003, two years after the circuit was opened. The first couple of seasons we used a 2.44 mile version of the layout that gave drivers a 20 second plus blast round the Oval but after a two year gap, when we returned in 2007, a shorter infield section was used, making the circuit length 1.44 miles and cutting our lap times by some twenty seconds although the thrill of the Oval was still there. Happily, as far as I can recall, we have only had one driver hit the wall hard on the Oval – Simon Hampton with the 33 16v he shared with Mark Bevington, in 2004. Happily the driver was unharmed, even if the car was not. The 2003 races didn’t attract the best entry in the world but there were overall wins for Nik Mantikas in the Classes E & F race with his Class F 33, with Graham Heels (146 Ti) on top in E. Tim Lewis (Alfasud Sprint) was a clear winner in A to D, Andy Page (Giulietta Turbo) and Anthony George (33 16v) following him home. A year later, some 40 cars turned up for the split grid races, with overall wins being taken by Nick Sismey (33 16v) and Andy Millar (33 16v), the classes going to Graham Presley (75 Turbo), Neil Smith (156), Roger Evans (155 3.0) and Chris Finch (156). 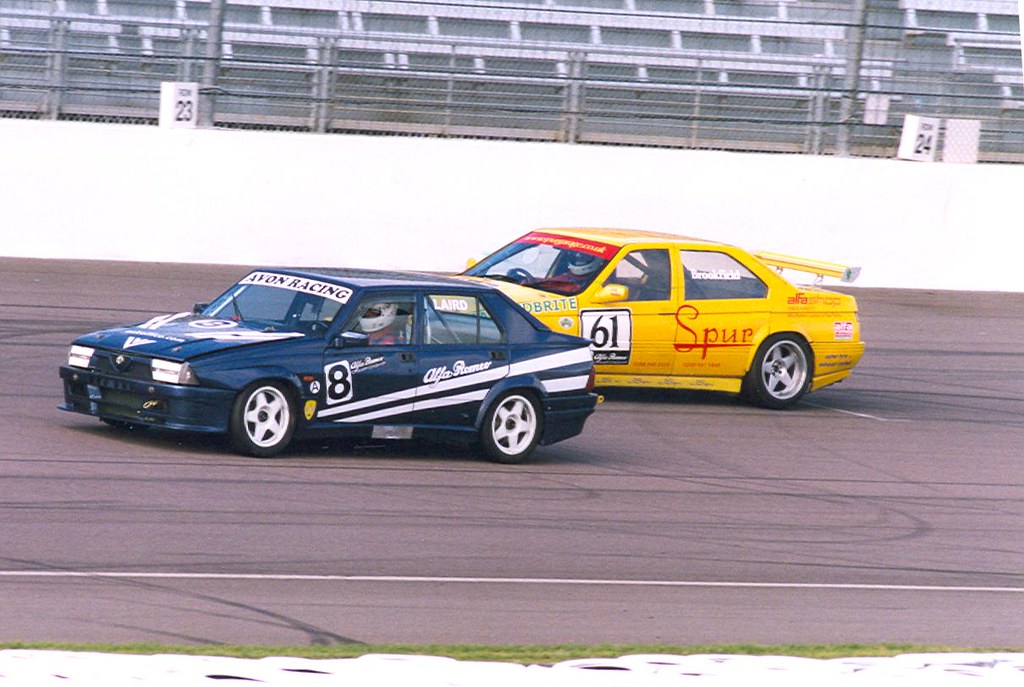 If there is one meeting of the year that attracts many old friends of the Championship it is Festival Italia at Brands Hatch. This year brought along a large number led by Chris Snowdon and Keith Waite who were making their first, and maybe only, racing appearance with us this year.  For Keith it is the 30th season that he has raced in the Championship and for Chris the 23rd. In Chris’s case it produced another two wins and I have promised that I will go back in the archives and see how many Alfa races he has won over the years. 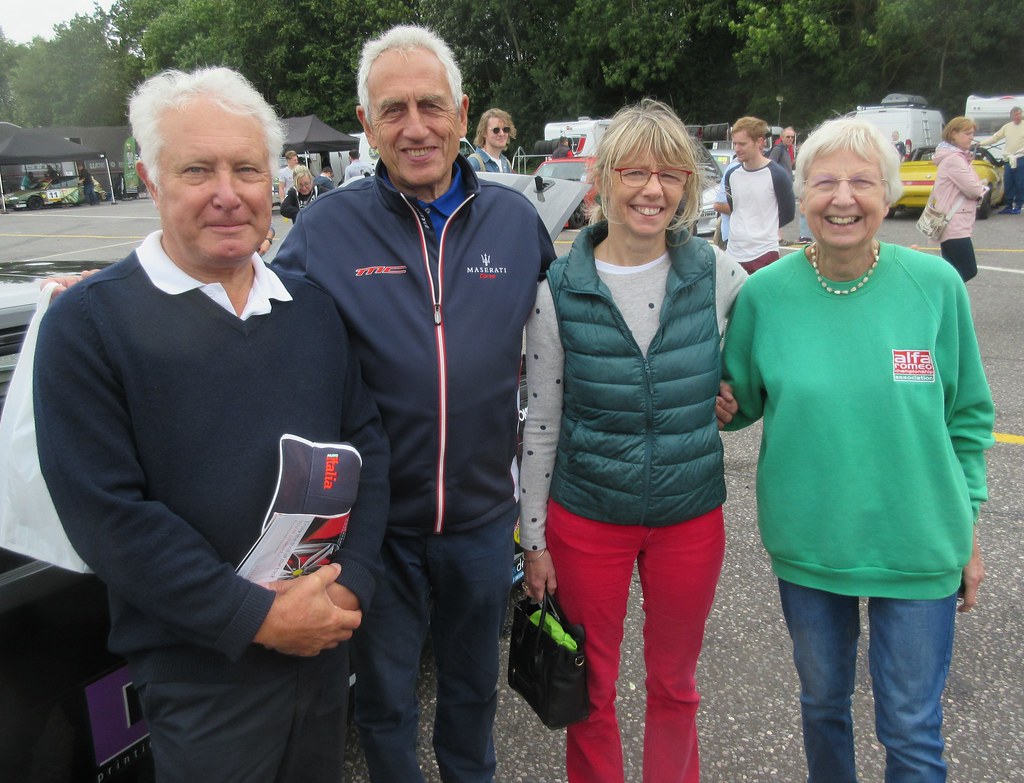 It was good to see Chris’s old rival Roberto Giordanelli and his partner Jane, along with ex Auto Italia editor Phil Ward. We spent some time talking about the Genoa bridge tragedy. Roberto and Jane live down there and passed over it regularly, as has Phil while I recall doing so on occasions in the past. It was good to see Steve Fox who, these days, is in charge of the Brands Rescue Unit at the pits exit and also Paul Legge who was helping Keith Waite with his reluctant 75. Other visitors were John Day who raced a 146 and 155, and used to provide some excellent paddock hospitality for the championship, Jeremy Chilton who had come to see his old 156 in the hands of its new owner Avni Ropica and these days restricts his circuit activity to marshalling, and Andy Hancock making an appearance in the Bianco area, although sadly not at the wheel of the Grove & Dean liveried 156 that was to be in the hands of Riccardo Losselli. James Browning was making his first visit to a race in 2018 and was talking about his plans to return to racing next year after his 147 has received some t.l.c 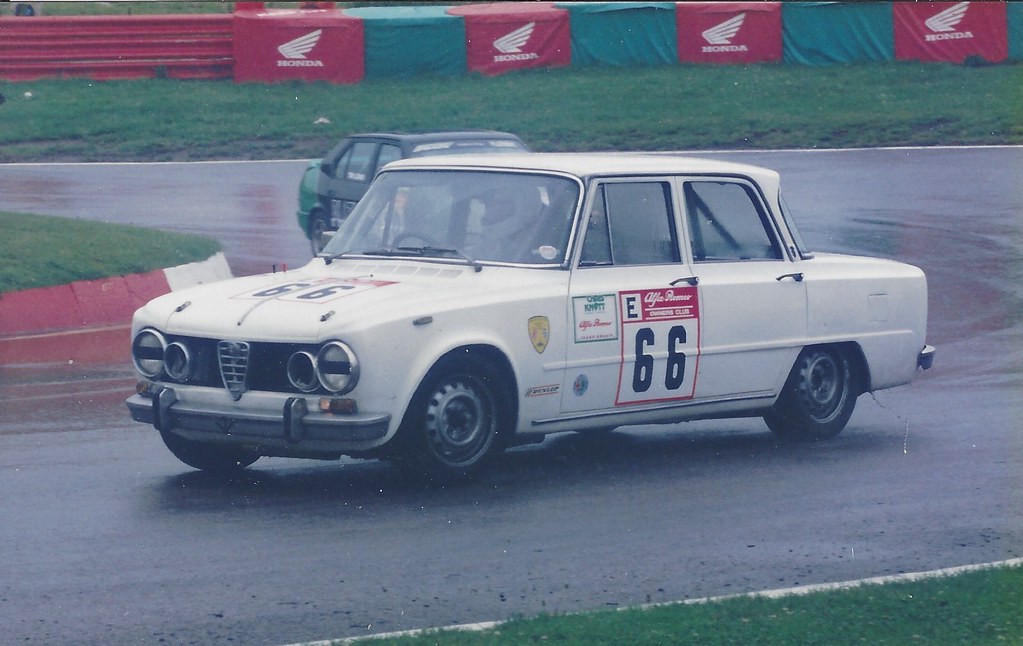 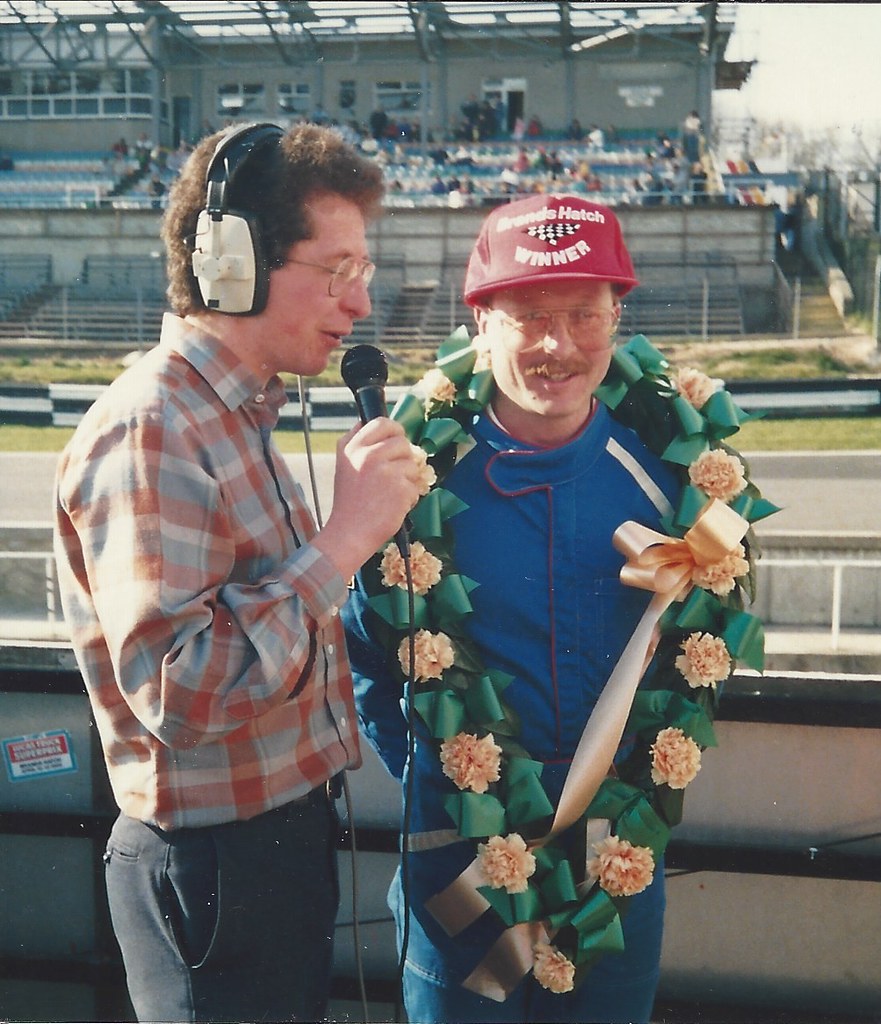 Among the very welcome visitors were several whose driving days in the Championship go back to the 80s.  Paul Fasey, who used to share a modified Alfasud Ti with Andy Steavenson, Tim Daniells who took a Class F win at Brands in 1988 with a Sud and Jonathan Griffin who is best remembered for his successes in a white Giulia Super. Jonathan also raced a Sud very effectively at  times and still has the Giulia. Would be nice to see it at Donington in October. Richard Melvin was there assisting Chris Snowdon and Chris is to drive Richard’s ex Peter Hiliiard Alfetta GTV in the Donington race. 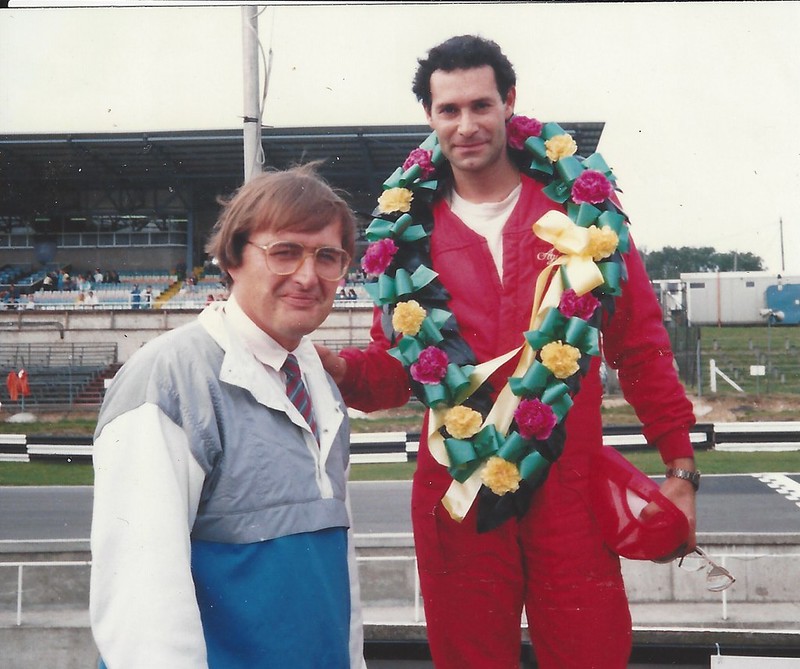 Another familiar face was that of Agi Eugeniou. He is another who took a class F win at Brands, also in 1988 when we made two visits – his only victory in the class – and was presented with his trophy by sponsor Chris Knott, making one of his rare appearances. Agi has actually come back to racing and was taking part in a Sports 2000 race in the MSVR meeting on the GP circuit the day before. However, he does have a 156 GTA at home, complete with roll cage and I was working hard to persuade him to give up the Royale and come back to racing an Alfa.

David Thomas and son James came to visit us later in the day. David, of course, was a regular and successful competitor with both Alfasud Ti and 33 over a twenty year period from 1993 as well as being a Panel member until the end of last year. Many will still remember the battle that James had at Brands in his yellow 146 with Dave Messenger’s 156, Dave crossing the line to win the then Class E by just 0.049”, one of our closest ever finishes. Another name on the results sheet that day was Louise West and Louise was at Festival Italia looking after Nick Anderson’s 916 Spider for which she had recently built a new engine. It was also good to see Chief Scrutineer John Monk who was for many years our Eligibility Scrutineer after he took over the role from Colin Barnett. Steve Foley, who so nearly won the Championship overall in 1998 with a yellow, Avon Racing prepared, Class E 75 was very happy to see his father Ray take another two second places in his 147 GTA and was equally pleased to be asked by Andy Robinson to present the trophies at the end of the meeting. Last but not least, we were happy to see both Vincent Dubois and George Osborne with their 156 Turbo and 75 3.2 V6 respectively although they had entered the Allcomers races as they offered a better financial deal for a one-off entry. That said, the racing didn’t suffer from not having any modified cars as the Power Trophy and Twin Spark Cup certainly gave us enough to cheer about.

Is the BTCC Giulietta getting there?

Rob Austin’s Giulietta received plenty of publicity in the “BTCC at 60” coverage by both Autosport and Motorsport News and the level of preparation and commitment by the Duo HMS team was plain to see. However, I still have to express regret that the central part of the car – the engine – has nothing to do with Alfa Romeo whatsoever. It is the Swindon Engines produced TOCA spec 2 litre turbocharged  unit which produces some 350 bhp and is used by a large proportion of the BTCC field. One could argue that it leaves entrants free to concentrate on other aspects of the car without worrying about the power unit, but even here there is little Alfa Romeo except the shape of the body and the ever recognisable grille. Front subframe and suspension are RML spec items and the gearbox is an Xtrac 6 speed sequential.

Forgetting about all that though, how did the car go on its latest outing at Knockhill last weekend? The two practice sessions were definitely encouraging with times that put the Alfa 4th and 5th on a dry track. Come qualifying, though,  this was not repeated and 13th fastest in the wet was the best Austin could do. However, one has to remember that it is one of a 32 car field and the times are very close. Best results in races 1 and 2, again on a wet track were disappointing although an adjusted list for race 2 moved the Alfa into the top 10 with 9th. Race three, on a drying track, saw Austin have to settle for 13th.  The next round is at Silverstone in mid September when we are at Rockingham.