The Alfa Romeo sponsored Sauber-Ferrari team continue to impress, with Charles Leclerc leading the way as he continues to make his mark as a potential Ferrari driver of the future. The Monaco Grand Prix didn’t quite end as hoped as a broken brake disc at the entry to the chicane left him trying to slow the car down on the Armco before ploughing into the back of Brendon Hartley’s Toro Rosso.

In Canada, however, his 10th place saw him scoring points for the third time in the first seven races of the year. And once again he found himself battling to good effect with Fernando Alonso’s McLaren. Marcus Ericsson has found the going tougher but major changes that move him away from Leclerc’s set-up will, it is hoped, make him more competitive. Much of the news at Sauber, though, has been changes in the engineering team, particularly Simone Resta moving from a senior role at Ferrari to join Luca Furbatto on July 1st with particular reference to the design of the 2019 car. Team Principal Fred Vasseur who is quickly building on his reputation for strong management gained at DAMS and Renault F1 reckons that the 2019 aero regulations will be much to Sauber’s advantage and that the team’s own wind tunnel will once again come into play.

Leclerc and Ericsson will be in action again this weekend when the French Grand Prix returns to the calendar for the first time since 2008 when it was held at Magny Cours. A much refreshed Paul Ricard track in southern France is the venue this time and with a five year contract in their pocket, the race organisers are hoping that this will put this classic race back where it belongs. For the teams it is the start of an even higher pressure period with races on three successive weekends – France, Britain and Austria. The truckies are certainly going to earn their money rushing all over Europe let alone those putting up and taking down the hospitality areas at each of the circuits!

If you want a model of the 2018 Sauber Ferrari, complete with Alfa decals on the engine cover, Spark have produced a 1/43rd example of the launch car. For a  race version, you will have to wait a while longer.

FCA lay down plans for the future 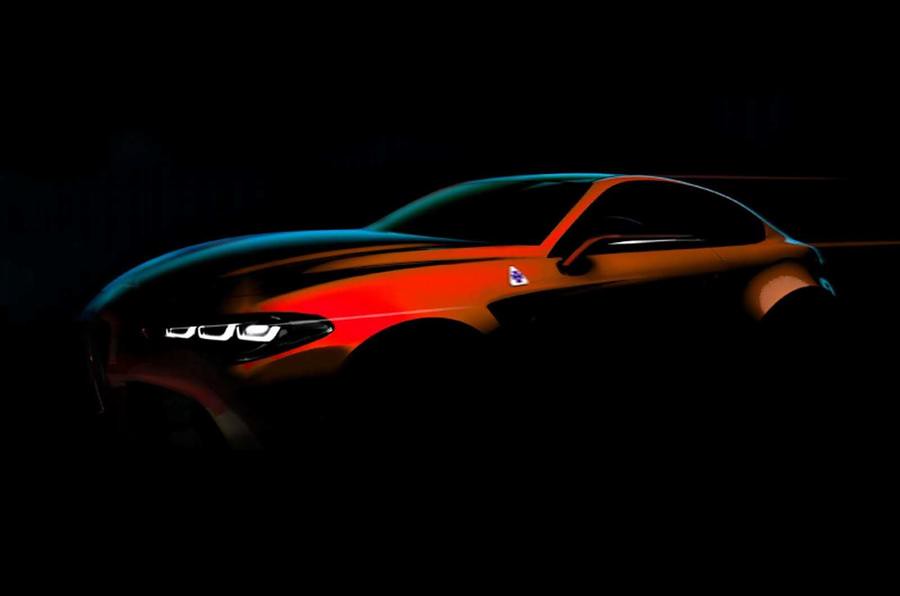 Fiat Chrysler Automobiles boss Sergio Marchionne recently laid down plans for the next model and production cycle affecting its marques – Fiat, Alfa Romeo, Maserati , Jeep and Ram  (producers of vans and pick-ups in the U.S) Our main concern, of course, is Alfa Romeo and we might be tempted to say “how many times have we heard this before”? In 2014 It was announced that Alfa would produce global sales of 400,000 cars a year by 2018. Last year that figure remained stubbornly at 109,000. Going further back, I have a  copy of “CAR” magazine on my desk dated August 2012, the cover of which shouts “6 Cars to Save Alfa!” This was Marchionne’s first master plan but he has a good track record with the group as a whole, having seen its value rise from £3.73bn in 2004 to its current £52.3bn. So what is being promised? Well, first of all, Alfa diesel engine production will cease and there will be new emphasis on hybrids. There will also be a 100% electrified model range. 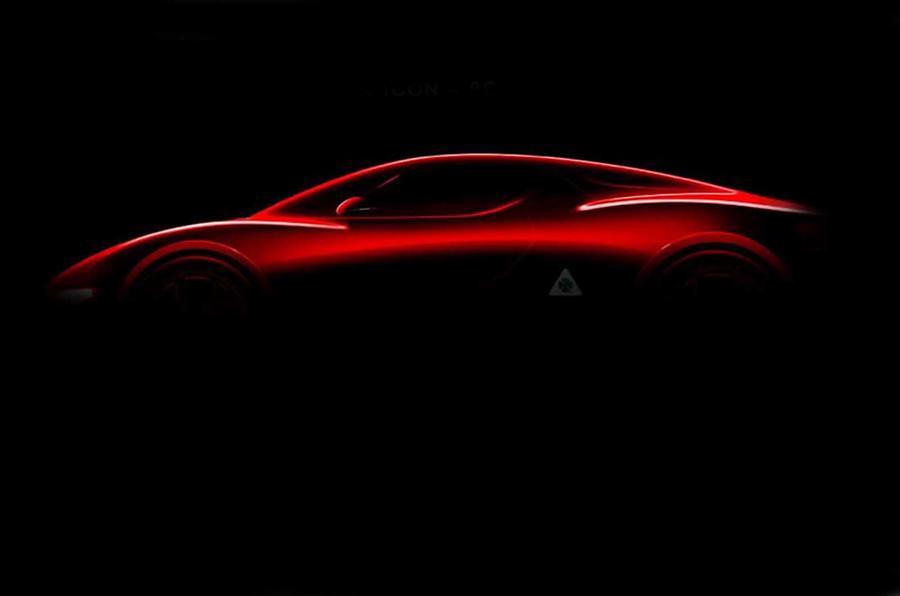 Development of the Giulia, Giulietta and Stelvio SUV will continue while there is going to be an all new GTV, a smaller SUV  and a series 2 8C. The 400,000 sales figure is now predicated on being reached by 2022. Elsewhere in the group it is interesting that the Fiat 500 will have an electric version and there will be a new electric 500 Giardinera for us to use around town. There will be a new Panda but both the Punto and Tipo will be deleted from Europe. This is going to be Marchionne’s policy statement as he is soon to retire and it will interesting to look back again in 2022 to see how successful it has been. Rob Austin and the HMS Alfa team came away from the last three races at Oulton Park encouraged by the progress that they were making with the Giulietta and looking forward to the next meeting this coming weekend at Croft. The third race at Oulton, from the reversed grid, looked as though it was going to produce a season-best 2nd place for Austin until a differential failure brought about a hugely disappointing retirement with just 3 laps to go. With a second podium of the season looking likely, this left the team somewhat crestfallen for a while but still determined to look on the positive side for the visit to Yorkshire and beyond. “Oulton Park was a rear wheel driver circuit” says Austin “which saw the BMWs get two out of the three wins and an eventual podium lock-out in race three but Croft usually hands the rear wheel drive cars their biggest advantage of the season by far. With that in mind you have to be realistic and, unfortunately, that means we are extremely unlikely to be challenging for a podium in race 1. Once the success ballast comes into play, and with the reverse grid for race three combined with some luck, an opportunity might open up but I think our realistic target has to be top front wheel driver car. We really turned a  corner with the car at Oulton…..and are absolutely on the right track now”. 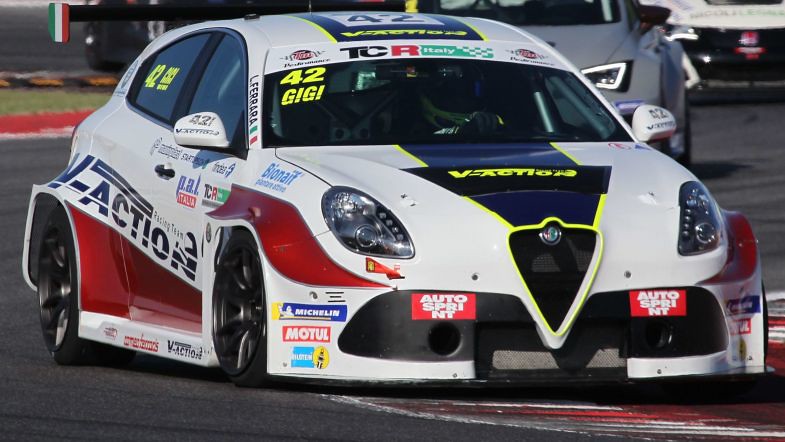 Michela Cerruti and the Romeo Ferraris team must be finding things a little perplexing at the moment. Why is the V Action Giulietta of Gigi Ferraris having such success in TCR Italy, taking a win and a second place at Misano Adriatico last weekend, while the Mulsanne Racing cars of Giovanardi and Morbidelli were still well out of contention at Zandvoort last time out in the WTCR Cup and the DPE (ex Laser Racing backed) cars were not able to start at Brands Hatch in TCR UK on June 2nd/3rd because of engine valve and head gasket problems? I watched the Misano races through the TCR website and the two Giuliettas were always in the top group in a 32 car field and the results have left Ferrara leading the Italian Championship, 23.5 points clear of Salvatore Tavano’s Cupra.  The World TCR Cup reaches the half way stage this weekend with races on the Vila Real street circuit in Portugal. The next UK rounds are Castle Combe over the weekend July 14th/15th. 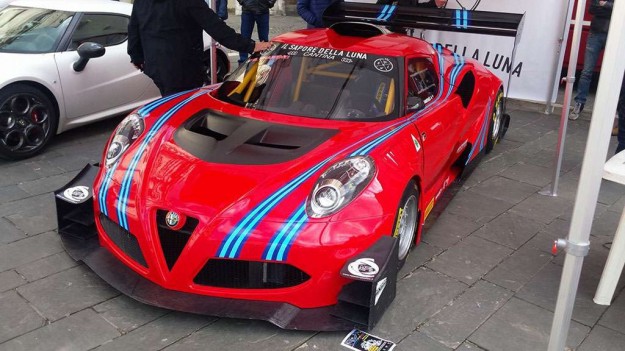 Last year we included some pictures of the Alfa 4C based hillclimb car built for Marco Gramenzi who. up to that point, had run a 155GTA in the Italian Championship for several seasons. A second car, painted black, has now been built for a Signor Gabrielli and he won his class with it last weekend at the “Coppa di Selva Fasano” (between Bari and Brindisi). Gramenzi finished second to give a satisfying Picchio 1-2. These 4Cs were constructed by Picchio Racing Cars in their smart factory near Teramo, north east of Rome, with carbonfibre chassis and bodywork and a version of the Alfa 1750 turbo engine that supposedly produces some 600 bhp! 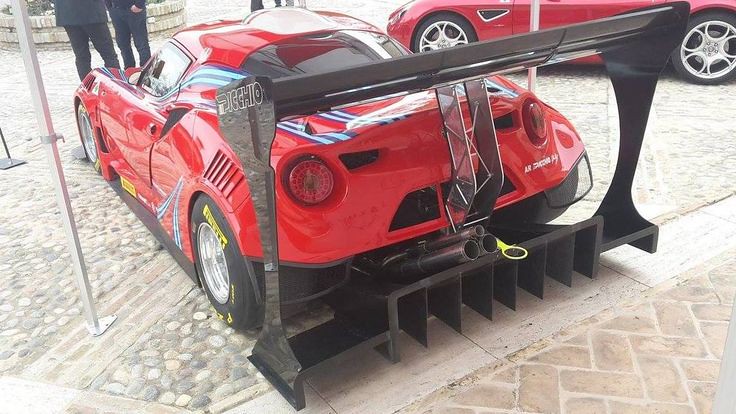 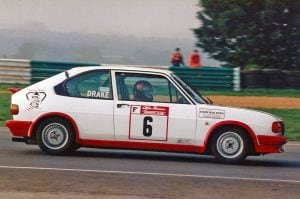 The latest “Auto Italia” features an article on Norwich’s “Little Italy” that includes Richard Drake Motors, currently involved in preparing Paul Webster’s 156 engine. Richard, of course, has been involved in the Championship on and off since he competed himself with an Alfasud TI  between 1984 and 2004.

Double Alfa Champion Ted Pearson returned to Historic Formula Ford  at Silverstone last weekend, after a four year gap, with a Merlyn Mk17. He qualified 15th in the massive 40 car field and was up to 10th in the race before having to retire after five laps. Despite his re-entry into single seaters, we hope there is still a chance that he will appear with one or other of his Alfas (the championship winning metallic green Ti and a more recently acquired Trofeo), at Festival Italia in August. 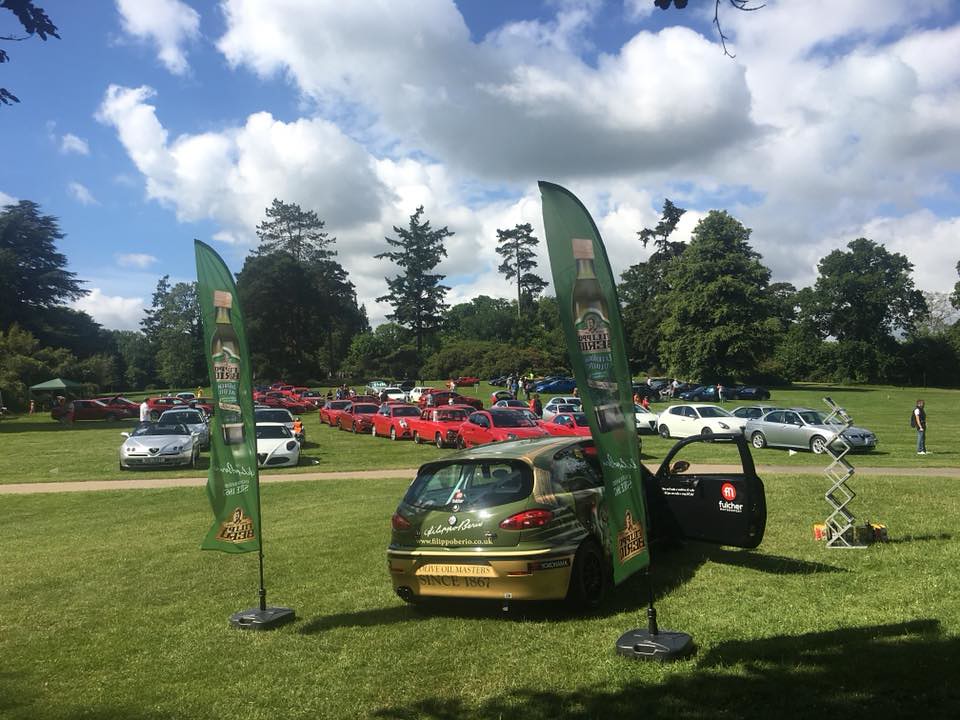 Our thanks should go to those who have been at various events this year with their race cars promoting the Alfa Championship. Andrew Fulcher was at Spring Alfa Day and last weekend’s Hever Castle Alfa gathering with his Felippo Berio 147 while Matt Daly took his 145 to Duxford and Brooklands. This coming Saturday Dave Messenger’s Darnells team will be at Cotswolds Alfa Day with their 156. This will be taking place at the Cotswold Wildlife Park near Burford. 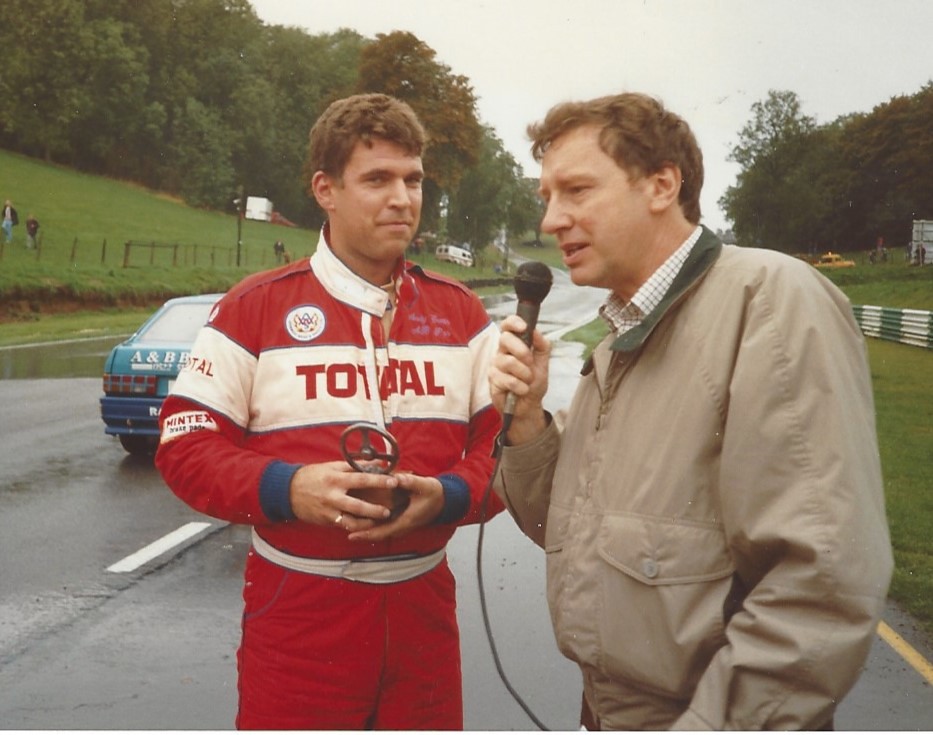 Congratulations to Andy Fraser who celebrated 50 years of commentating at Cadwell Park when we were there recently. Andy and his 35 year long commentating partner, Dave Smailes, have always made me most welcome there (and at Anglesey and Croft) and I have learned a lot from both of them over the years. Interestingly, Andy tells me that he is also now the happy owner of Giulietta 1.4 Turbo Multiair. In the archive we have found a picture of Andy interviewing class winner Andy Curtis after a wet race in October 1994. A question for you – who was the overall race winner whose car can be seen in the background? 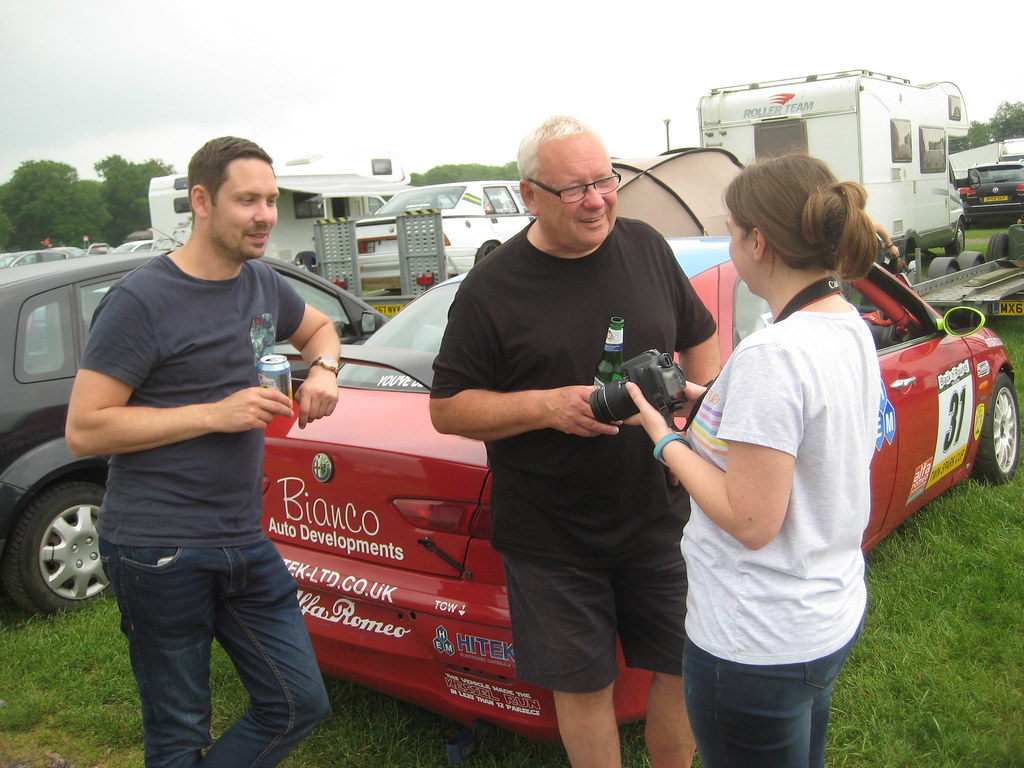 Natalie Ford, Richard’s wife, has joined the ranks of the championship’s photographers, increasing the Ford family presence in our midst with Keith Ford on the Panel, Richard doing a full season in his face-lift 156 and James keeping a watching brief and hoping to return as a driver at some point. It Is always good to have new eyes behind the viewfinder (Natalie did the prize giving pictures at Cadwell). Another to have shown some of her efforts is Matt Daly’s daughter Isabel with some nice shots from Brooklands in May.

Postscript: Neither Sauber driver was very happy in French GP Practice 1 and the session ended with a big crash at Signes, the fastest corner on the track, for Marcus Ericsson. The two cars ended 13th and 14th with Leclerc just ahead.