Alfa Romeo sponsored Sauber-Ferrari driver, Charles Leclerc, has continued to impress and was once again in the points at the end of the Spanish Grand Prix on May 13. Luck was on his side at the start of the race as he managed to avoid the chaos caused by Romain Grosjean’s first lap spin. However, you could also say that this benefitted Leclerc by eliminating the Haas and Pierre Gasly’s Toro Rosso-Honda which had been ahead of the Sauber on the grid. Nonetheless, he was always in the mid field mix and 10th place just behind Sergio Perez (Force India) was a satisfying result. Ericsson would finish 13th.

Post Barcelona testing saw Antonio Giovanazzi back in the Sauber for the first time this year, lapping only a fraction slower than the regular drivers before taking over from Sebastian Vettel at Ferrari on day two, and ending the two sessions a fine 2nd quickest. Charles Leclerc was back in the Sauber, topping Giovanazzi’s time from the day before. Meanwhile, Sauber test and development driver, Tatiana Calderon, was telling the press that she harbors hopes of an FP1 run later in the year. Her two GP3 races prior to the Spanish GP can’t have helped her cause though with a retirement after contact in race 1 and an “off” in race 2.

This coming weekend Leclerc will be taking part in his home Grand Prix in Monaco where he will undoubtedly be the focus of much attention. Even before the track action started he was photographed presenting Prince Albert with one of his crash helmets and Channel 4 also found him with the Prince in the pit area just before Free Practice One was about to get underway.

Earlier this morning, @Charles_Leclerc presented his helmet to Prince Albert II of Monaco. What an honour it must have been 😊 #F1 #MonacoGP pic.twitter.com/F7CjgF9Y1L

There was also praise from championship leaders Lewis Hamilton and Sebastian Vettel who believe that the hype surrounding the Monegasque driver is merited.  Not that either Thursday practice session went particularly well, both Saubers ending the day near the bottom of the list in 16th (Leclerc) and 20th (Ericsson) positions. Friday is a day with no F1 action with FP3 and Qualifying following on Saturday as usual. Let’s keep our fingers crossed that the Sauber engineers have discovered something that will propel their cars into a more competitive position.

I’m sure that Michela Cerruti is wondering where the next chunk of good news is going to come from for the Romeo Ferraris TCR Giuliettas. After an unsuccessful visit to the Nurburgring Nordschleife for round of the World TCR Cup, it was a relatively short trip to Zandvoort last weekend for a return to a less demanding circuit. Not that it produced much of an improvement for Fabrizio Giovanardi and Gianni Morbidelli who, after various incidents left the circuit while a stewards enquiry was still going on and were fined £1500 each as a result. 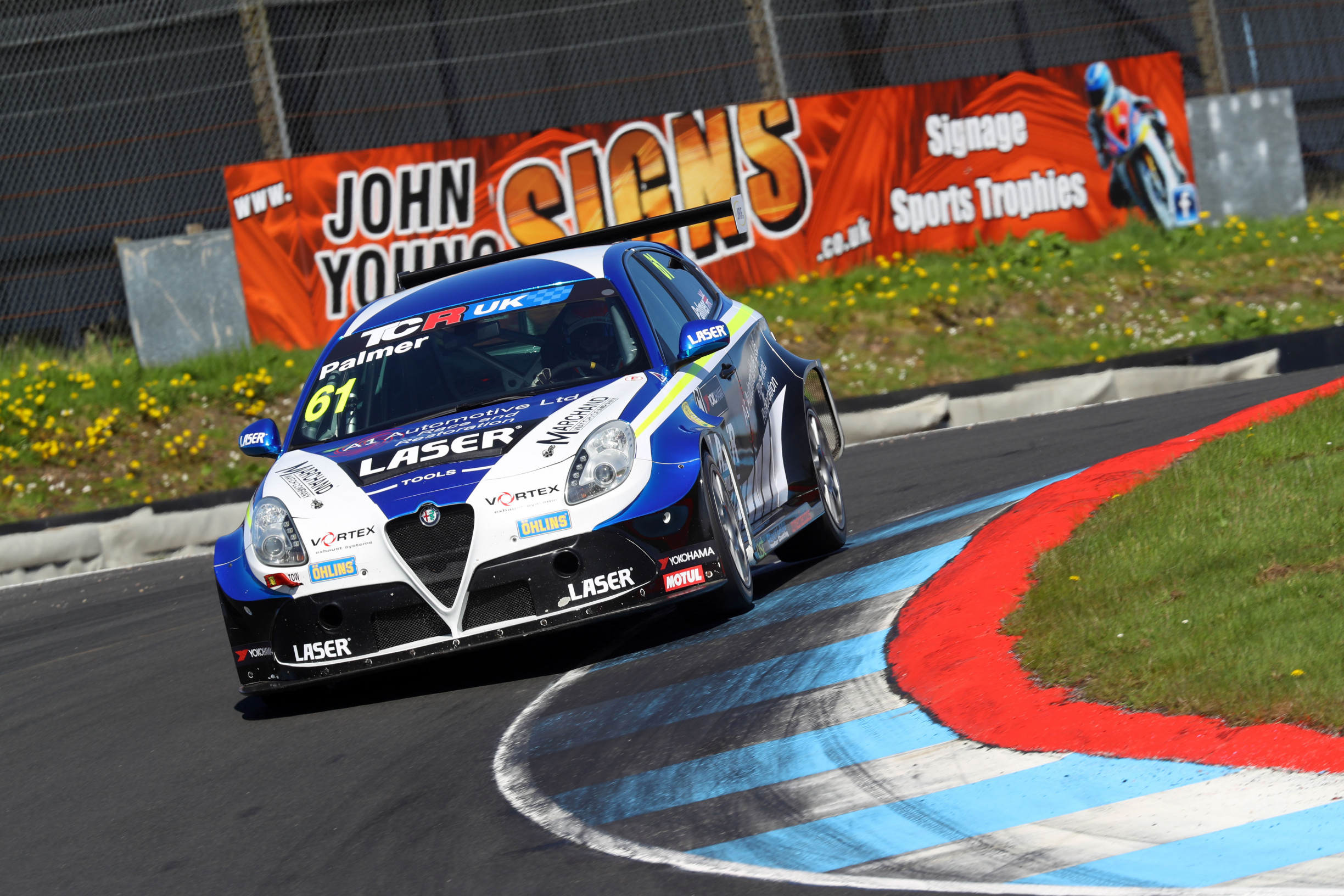 The TCR UK moved to Knockhill for its third and fourth rounds, using the reversed (or anti-clockwise) version of the circuit. Aiden Moffatt and Derek Palmer Jnr were again entered with the Laser Tools Racing Giuliettas, hoping for a more successful outing than they enjoyed at Silverstone. Sadly this was not to be. After qualifying 2nd Moffat and ran 2nd early on in race 1  before retiring on lap 8 with a broken driveshaft. He did not start race 2. Derek Palmer’s best result was 7th in race 2.

Not long after Knockhill we received the news that Laser Tools Racing were pulling out of the TCR, taking Moffat with them. Reasons given seemed to relate to unhappiness at how the championship was being run and I am sure there is a story to be told but maybe not just now! DPE, who had originally been going to run the two cars under their own name, soon confirmed that they would revert to the original plan and they have just announced that Robert Gilmour (about whom I currently have no information) will take over the second car at Brands Hatch on June 2nd/3rd. I am sure that Rob Austin is still clinging to the opinion he expressed after Brands Hatch that his team is only “ scratching the surface” of the BTCC Giulietta’s potential. The latest outings in the three races at Thruxton last weekend which resulted in 16th, 13th and 16th place finishes cannot have been quite what he was looking for. Only consolation, perhaps, is that this is in a 32 car field and there plenty of “names” keeping him company, not least Ash Sutton and Jason Plato in their Subarus. The next meeting is at Oulton Park over the weekend June 9th/10th.

Back in 2005, writing for our monthly Newsletter “Alfa Romeo Motorsports News”, I commented that “these days it is not often that an ALFA ROMEO book appear that tells us anything new. My greatest regret is that Luigi Fusi’s history of the Portello factory never made it to a publisher as this would undoubtedly have told us a great deal about Alfa in the days just before and immediately after the war when Fusi himself was an integral part of the drawing office under the leadership of Vittorio Jano and Orazio Satta. I am told  the manuscript still exists, so I live in hope. I was writing then in connection with a new book entitled “Autodelta” which had just been published in Italy. On acquiring a copy, still in its cellophane wrapper, I was surprised to find that it was not a complete saga, but more the intimate story of the company founded in 1963 by Carlo Chiti (then still working for ATS after leaving Ferrari) and Lodovico Chizzola at Feletto Umberto in the Province of Udine to produce the TZ on behalf of Alfa Romeo and Zagato. I have awaited the full story and it could be that it has just come my way in a book written by Giuseppe and Massimo Colombo – all 609 pages of it! The only drawback to a quick read is that it is published in Italian and although I have AutoSprint every week to keep my Italian reasonable up to date, I shall be having to concentrate very hard. Nonetheless, I am already up to page 75 and realise that this is a book for which the authors have received much support, and contributions, from the Chiti family and many of those who worked at, and raced for, Autodelta throughout its twenty year life. I am expecting, therefore, to learn some things that I did not know.

While looking into other books, I found that Mario Tabucchi – well known for his own books covering Alfa Romeo – also published an Autodelta history in 2012 and that an updated edition will appear later this year, so I will wait to acquire that. And if you want to read about the glorious Autodelta built 33s, I have to say that the book by Peter Collins and Ed McDonough is a mine of information with the support of some splendid photographs.

BIANCO ROUND THE CLOCK – WITH A C1 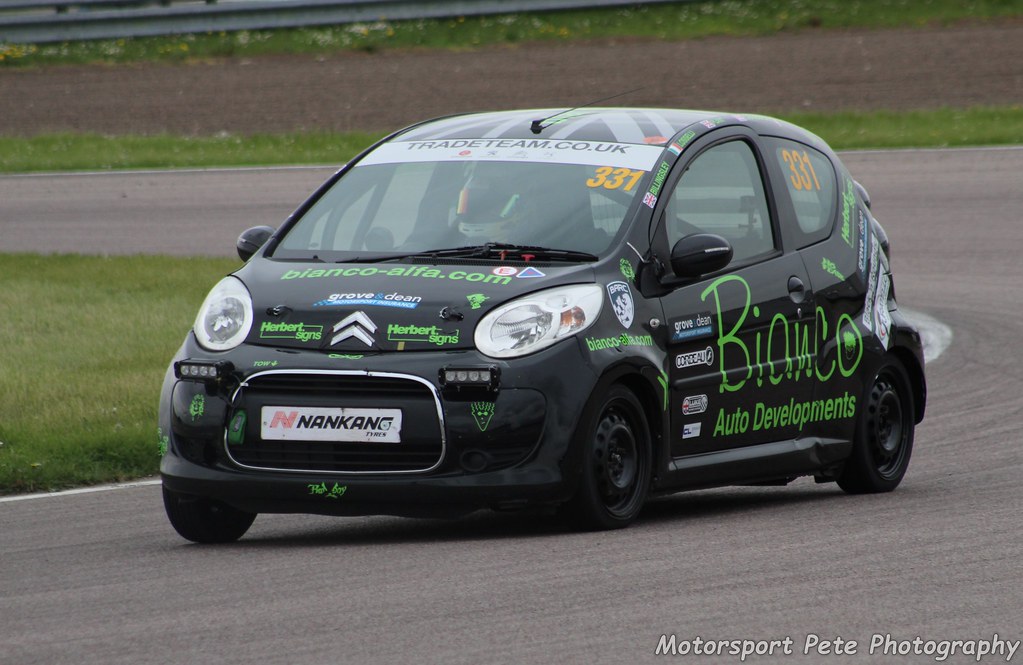 Rockingham was the venue for another 24 Hour race for Citroen C1s on May 11th/12th  following on from the highly successful event at Spa last year. Bianco Auto Developments had competed in that race and were one of the first to sign up for the race here, hoping that it would not clash with an Alfa Championship meeting. Happily it didn’t. The four driver team comprised Paul Plant, Jon Billingsley, Riccardo Losselli and Jess Chamberlain as part of a total field of 49 cars.  At one point they ran a splendid 10th but two punctures, a collision that damaged the car’s steering and a fuel pump (in the tank) which fell apart, dropped them to an eventual 30th place at the finish. They hope to have go at the second Rockingham race later in the year.

The VSCC “Formula Vintage” Meeting at Oulton Park is  one of the most popular vintage events and for Alfa enthusiasts there was the splendid sight of Chris Mann’s 2300 Monza winning a race for Standard and Modified Pre-War Sportscars. As it did at the Goodwood Members Meeting in March, the car carried a light blue/dark blue colour scheme in memory of the French woman racer Helle Nice who competed in both Bugattis and Alfa Romeos in the 20s and 30s.

As I was not able to go to Anglesey at the end of April for this year’s second Alfa Championship meeting, I thought it might be fun to look back at one or two podiums (well, three actually)! from some of our earlier visits there. The circuit was first opened in 1997 with a 1.067 mile layout (which, as a spectator I quite liked) before most of that was ripped up and replaced by the current four possible layouts. We first visited the track in 1998 for two races – one for classes A to D and the second for class F which meant it was a long way to go for 13 minutes racing! The picture below shows the finishing line-up of  A to E race winner Alan Marshall (75 3 litre), with class winners Dave Streather (Arna Ti – left), David Thomas (Alfasud Ti – second from right) and Steve Foley (75 Twin Spark – right).  Alan set the quickest lap in 51.7”.Also in the picture is the double decker bus that was being used for the timekeepers, race control and commentators – a throw back to many circuits soon after WW2. 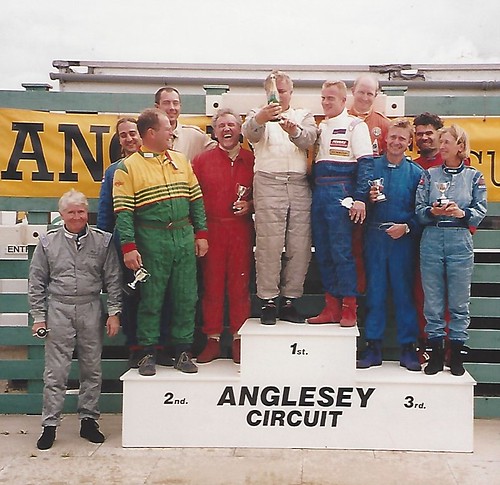 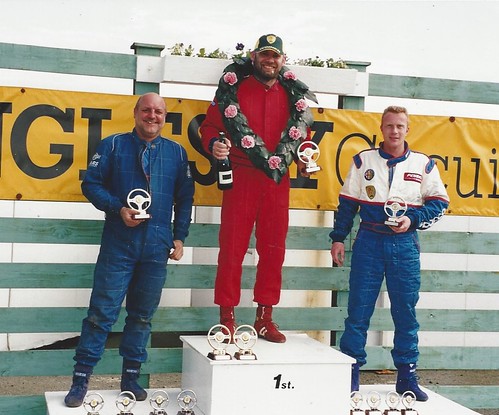 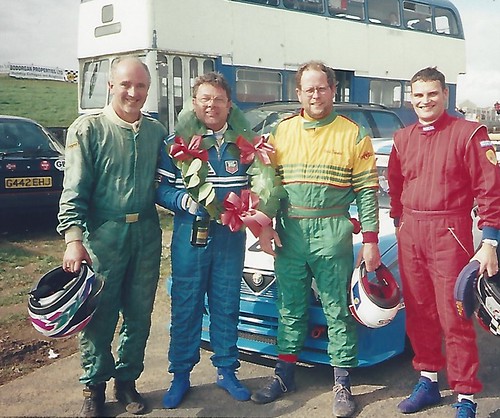 Our next visit came in 2001 but this time, each grid enjoyed two races and the podium photograph was taken after the class A to E race on the Saturday – the winner, Julian Birley admires his trophy while left to right we have Ron Davidson, John Clonis, David Thomas, Bernard Pranic. Graham Presley, Julian, Anthony George, Bryan Shrubb, Simon Griffiths, Andy Page and Minette Rice-Edwards. Quite a slice of Alfa Championship history here!

We had to wait until May 2005 before we were back at Anglesey again, our last visit before the track was re-developed. The races had now been lengthened to 20 minutes which meant that the winning modified car in race 1 (Andy Page’s Giulietta) completed 24 laps instead of the previous 15. The podium photograph shows Andy with runner-up Bob Godbold (33) and third place (and Class C winner) Anthony George (33). The lap record was now 50.29” set by Tim Lewis (Alfasud Sprint) Interesting to see the names of Chris Healey, Roger Evans and Andy Inman in the results.

See you at Cadwell next weekend!