What a difference two weeks can make!

The Australian Grand Prix produced another rather dull race, with several frustrated teams, unless of course you happened to be Ferrari with two out of the three podium spots! For Alfa Romeo sponsored Sauber Ferrari, it looked as though it would be a long journey from the back of the grid to mid field respectability.

And yet with Formula 1 you never know. It is so close behind the top three teams these days that only very small improvements can propel you forward to a more competitive position where you are not just racing with Williams at the back (how sad it is to say that!) but might have a chance of finishing ahead of McLaren or Force India. Sauber seemed to come away from Melbourne less discouraged by their performance than one might have feared and this was soon turned into reality in Bahrain, particularly when their race pace came into the equation. They have so many things going in their favour – the 2018 Ferrari engine, one of the best windtunnels around, a strong technical team and two drivers who are able to take advantage given half a chance. The result last Sunday, therefore, with Marcus Ericsson actually scoring points with his 8th place on merit, must have come as a major boost to all concerned although perhaps somewhat overshadowed by the fourth place achieved by the Toro Rosso Honda in the hands of Pierre Gasly. Charles Leclerc had a more troubled time, being on the wrong strategy after a very early pit stop to get rid of a badly flatspotted front tyre. He is also admitting that the previously underrated Ericsson is giving him a bit of a wake-up call in the other car.

With only a week between Bahrain and the Chinese Grand Prix everything will be on a knife edge with every team having make a myriad of choices to make sure their cars can last four hours of practice, an hour of qualifying and about an hour and a half of racing. Penalties of various kinds have already raised their heads and these can both help and hinder the smaller teams when it comes to Sunday afternoon but with engines and gearboxes being restricted to just three for the whole season this is definitely going to be a factor quite quickly as teams try not to risk a cataclysmic failure at this early stage of the year.

A cold and damp Shanghai practice two concluded at 8.30 this morning UK time with a very tight situation at the front of the field mirrored at the back with the Alfa Romeo Sauber team sadly ending 17th (Ericsson) and 18th (Leclerc) with the Williams and Grosjean’s Haas for company. We can but hope that the all important race pace comes to the team’s rescue again comes. This is a Channel 4 Highlights weekend if you haven’t got Sky, otherwise Radio 5  and the BBC website will come to the rescue, but you’ll need to be up early!

It is some time since we have been on the same programme as a major UK series but the fact that the BRSCC have been chosen to organise the first year of the new TCR UK series meant that there was always a chance that this would come about in 2018. As it turned out, we were to be part of the support package for the opening rounds at Silverstone over Easter. For some time we didn’t actually know whether there would be any Alfas taking part and even when two entries were confirmed it didn’t seem to be entirely clear who would be running them although the name of the two drivers – Aidan Moffatt and Derek Palmer Jnr remained constant. Finally, Laser Tools Racing, who run  Moffatt’s Mercedes A class in the BTCC were confirmed as the entrants and it was in their colours that the cars appeared at Silverstone. Mind you, the arrival of the cars in the UK was all very last minute and there was no time to implement a test programme, so it was all a bit of a walk into the unknown, although presence of members of the Romeo Ferraris team, including Chief Operating Officer, Michela Cerruti, was a help in calming nerves. Not that it was all plain sailing as a broken injector on Derek Palmer’s car meant scouting the country for a replacement which was eventually found on a crashed car some 45 miles away! As a result, he wasn’t able to drive at all on Easter Saturday. However, Aidan Moffatt made up for it by qualifying 2nd. There was a somewhat relieved response when I bumped into TCR UK Manager, Jen Mouratsing, on Sunday morning that she would have all 13 cars on the grid. 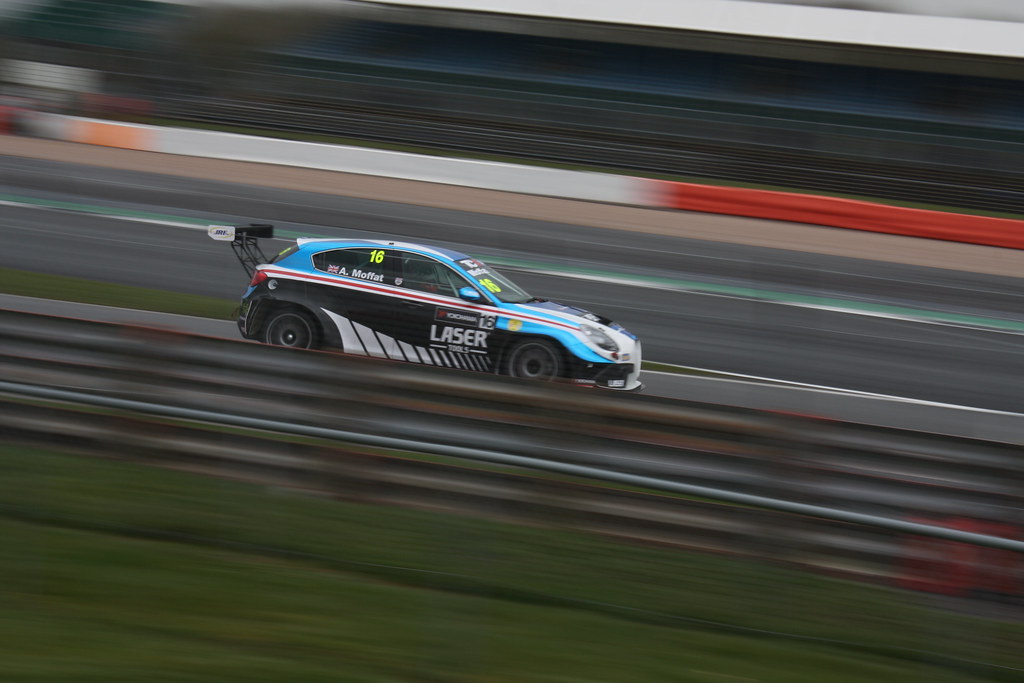 Both 30 minute races were on Sunday with plenty of track time, including qualifying on Saturday. Moffatt drove strongly throughout race 1 but was never quite able to challenge the leading Hynundai. Palmer, unfortunately, suffered a repeat of his engine woes and failed to finish. Moffatt temporarily lost his second place as the result of a penalty but this was overturned before race 2. Once again, in the reverse grid second race, Moffatt ran a strong 2nd until, with just two and a half laps to go, he disappeared from the timing screens having rolled to a halt at Becketts. The team later confirmed that, of all things, he had run out of fuel! What a disappointment after such a strong showing that could have left him running 2nd in the Championship. Derek Palmer did manage to finish, albeit last, after spinning on lap 1 but on the way was setting some competitive lap times and learning more about the car.

It was interesting to talk the delightful and friendly Michela Cerruti during the weekend about the Romeo Ferraris Team and her own career which I had followed through the pages of AutoSprint since she first drove in the Italian Touring Endurance Championship in 2008 at the age of 21. Two years later she moved into the Italian Superstars series with the Romeo Ferraris Team, driving a Mercedes C63 AMG and surprised everyone – and probably herself as well! – by taking pole and a race win at the opening meeting at Monza in 2011.  This had been followed by spells in Formula 3, Auto GP (a leftover from Formula 3000) and Formula E, with occasional outings of her own in TCR Giuliettas but it is probably in Endurance GT racing that she has really excelled, most recently with BMW. I said it would be nice to see her with a TCR drive of her own – to which I received an “I wish!” response. 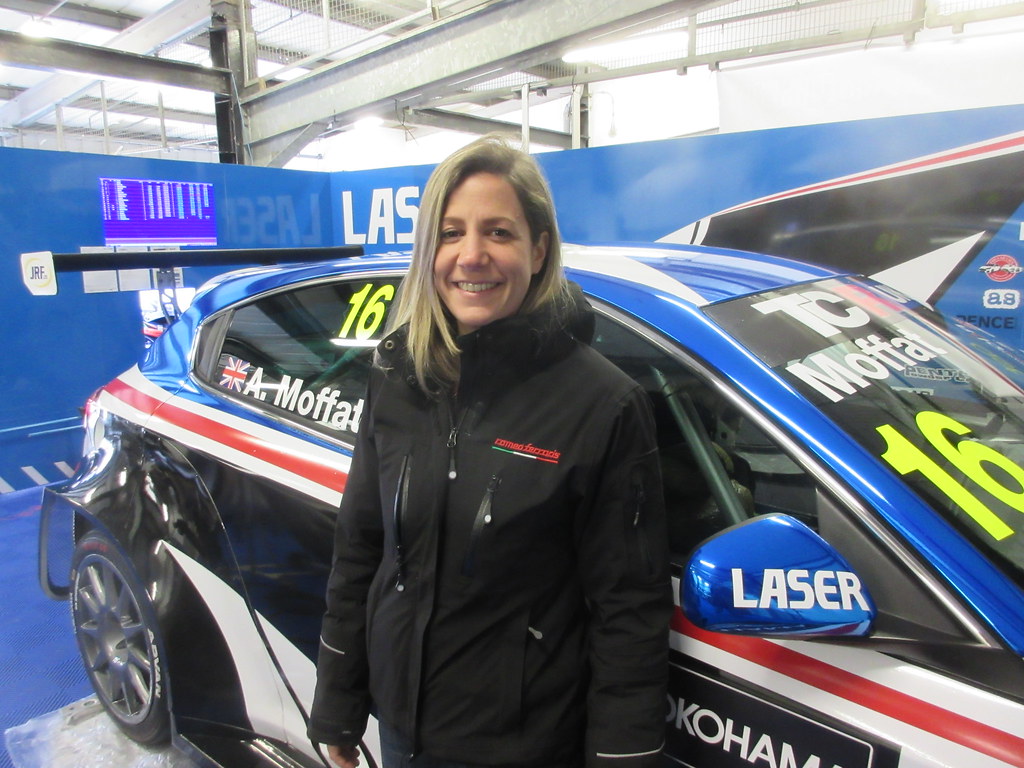 Early on Saturday morning there was also a familiar face outside our motorhome window when Malcolm Smith appeared with good wishes from past Alfa competitor Minette Rice-Edwards. Malcolm used to be a driver “coach” for Minette and shared her 75 3 litre in the Mini Enduro that we ran at Brands Hatch in November 2001. Anyway, the point of mentioning this is that Malcolm was involved with the Laser Tools Racing team running the Giuliettas in the TCR UK and give us a few insights into the running of the cars.

With Fabrizio Giovanardi and Gianni Morbidelli as its drivers for 2018, Mulsanne Racing, looked to be in good shape for the opening from of the new World TCR Championship, so to finish way down the field in the first races must have been something of a surprise. Even worse, the couldn’t use old age as an excuse as the winner on both occasions was their ex team mate Gabriele Tarquini in his Hyundai!! Something is obviously amiss here. 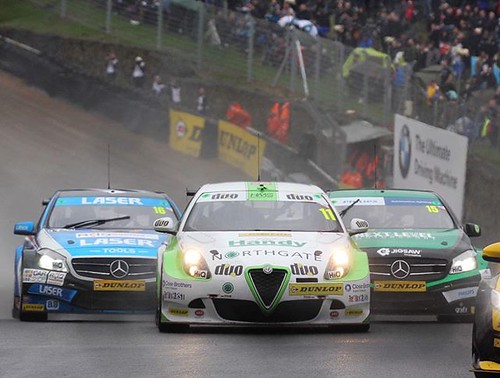 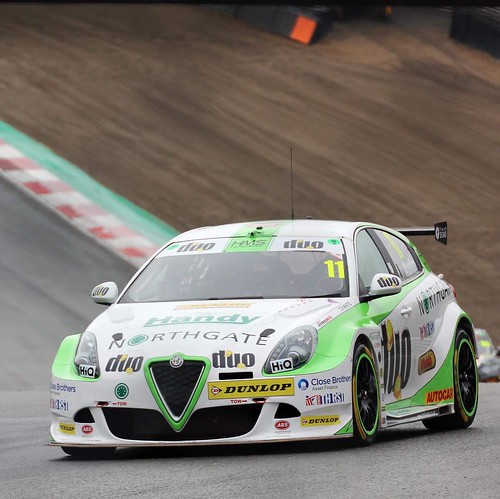 Much to the excitement of BTCC commentator, arch Alfa enthusiast David Addison,  the awaited debut meeting for the HMS Racing Giulietta was a reasonable success, particularly the podium (3rd place) in the reverse grid race 3. Added to the 6th place in race 2, this left Rob Austin a very satisfactory 4th in the points table, with 26 points to leader Tom Ingram’s 40.  Rob and the team had learned a great deal, particularly about tyres and the aim for the next outing, at Donington (April 28/29), will be to qualify higher than 11th as a launch pad for an even better weekend over the three races. 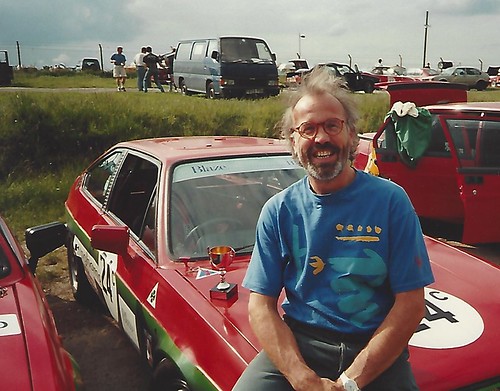 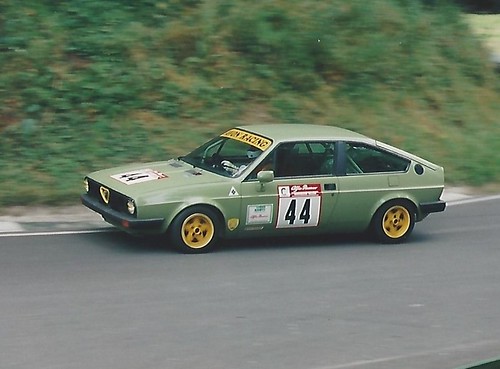 In a conversation with Dominic Ostrowski the other day, I learned that the organisers of the Wimbledon Common Park Run that he takes part in as often as he can is none other than ex Alfa Championship competitor, John Carter, and his wife Francesca. Between 1991 and 1999 John raced an Avon Racing run Alfasud Sprint in the old Class C. This was a well supported class that numbered amongst its regular drivers such names as double champion Ted Pearson, Richard Sykes (who visited us on the BRSCC stand at this year’s Autosport Show), Dave Walker and another double champion, Dave Streather (with an ARNA at the time).

Sadly, John could never do a full season but this didn’t stop him having some strong results and, in 1993, he took a class win at Cadwell Park. There were two 2nd places – at Castle Combe in 1995 and again at Cadwell three years later. His best Championship position was 3rd in 1993. He has sent his best wishes to all those he raced with during that time.

View from the Commentary Box

It was good to be able to watch our qualifying and the races at Silverstone In the relative “comfort” – that is, not getting wet or too cold! This time, I was in the company of Alistair Douglas who had also been the main commentator when we were at Donington at the end of last year and Dave Goddard. Dave and I were trying to remember when we last commentated together but couldn’t actually put a fix on it, other than it might have been at Oulton Park. Whatever, both Alistair and Dave are keen and well briefed Alfa Championship supporters. 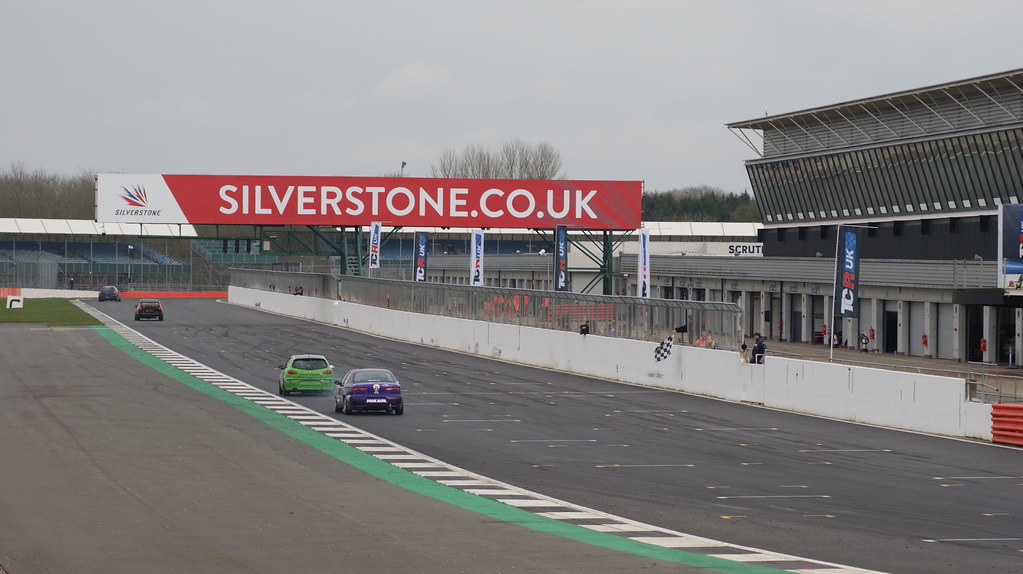 The arrangements at Silverstone are a little odd in that when both commentary boxes – Woodcote and Becketts are in use, the Becketts commentator has to leave his post before each race is over to drive back to the pits to conduct podium interviews. He then rushes back to Becketts, hoping to be there for the start of the next race – all somewhat frantic! Understandably, Alistair and Dave did a day of this each. Actually, given the choice, I would have liked to be out at Becketts as you feel really close to the action there and have view of Maggotts, Becketts and down the Wellington Straight. The view from the Woodcote box has been slightly improved, though, by using the room at the Copse end of the top floor “terrace” which means that your view of the lights, start and entry to Copse is much better while you can still have a good, if slightly distant view, of the Luffield complex. 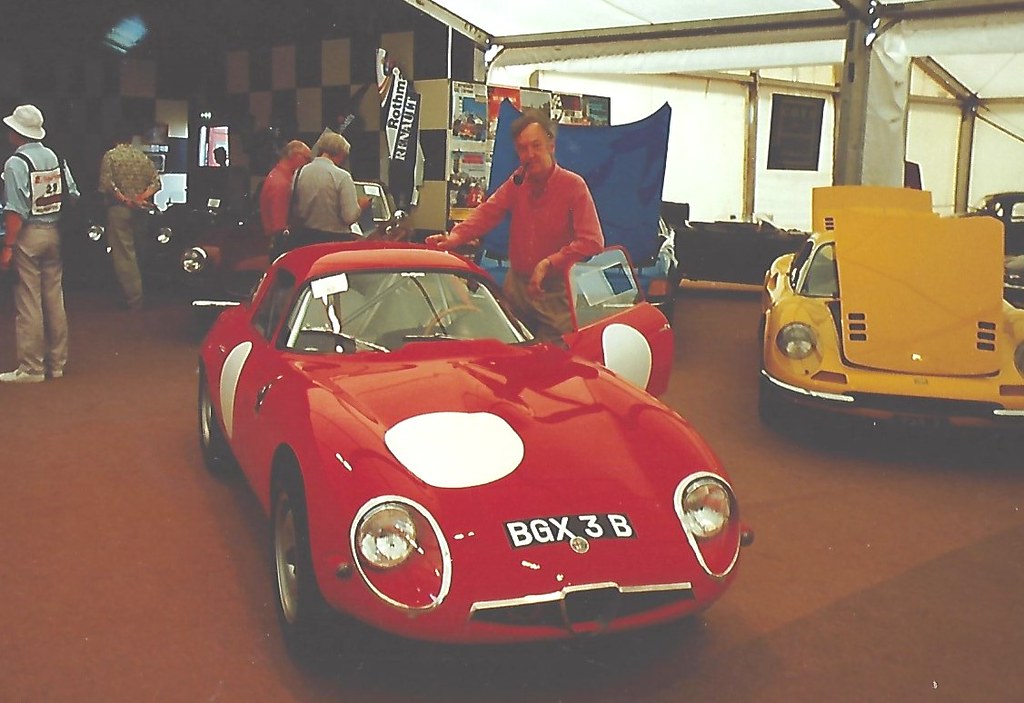 A call from Ken Carrington sent me looking into some old letters and photographs from Paul O’Hanlon who died last year. Amongst them I found a photograph of the TZ1 that had been rebuilt from the car crashed by Paul at Mallory Park during an Alfa v BMW race in 1969. From the accompanying letter, it seemed that the occasion was an auction in August 1994. Paul wrote “ Thought you might like a copy of this taken 25 years and 3 days after the event!!! £87,165 was the bid with the reserve of £95,000 so it did not sell”.