It looks as though we are going to have plenty to write about in “Friday Fix” during the coming season, with Formula 1, BTCC and TCR at World and UK levels as just a start.

As we finished putting “Friday Fix 67” to bed we had news of the first two practice sessions for the Australian Grand Prix in Melbourne’s Albert Park. Alfa Romeo Sauber FI’s Team Principal Fred Vasseur had already given Charles Leclerc and Marcus Ericsson very little chance of scoring points – in fact he seemed pretty pessimistic about the season as a whole which seemed very negative, or maybe just plain realistic! It seems that the latter was nearer the mark as both Saubers finished at the bottom of the timesheets in both sessions. However, both drivers reckoned that it had been a productive day and that progress had been made in reducing the unpredictability that they had suffered during testing at Barcelona.

Nonetheless, the 2.8” gap to Lewis Hamilton’s fastest time for Mercedes leaves a mountain to climb and is best forgotten. More worrying is the speed of Haas, using the same 2018 Ferrari engine, their cars finishing 6th and 9th with Grosjean only 0.7” slower than Hamilton. Practice 3, Qualifying and the race can be followed on the BBC Sport website if you want to stay up all night on Saturday and Sunday, or don’t have Sky.

Very welcome news from the Romeo Ferraris Team is that they have managed to persuade 51 year old Fabrizio Giovanardi to come out of retirement for a season World TCR season in one of their Giuliettas. This comes after the recent test at Monza where he expressed himself much impressed by the car which had some typical Alfa Romeo feeling about it. There is no news yet about a driver for the second car but there will have to be a decision soon as the opening races are at Marrakech over the weekend April 7th/8th. 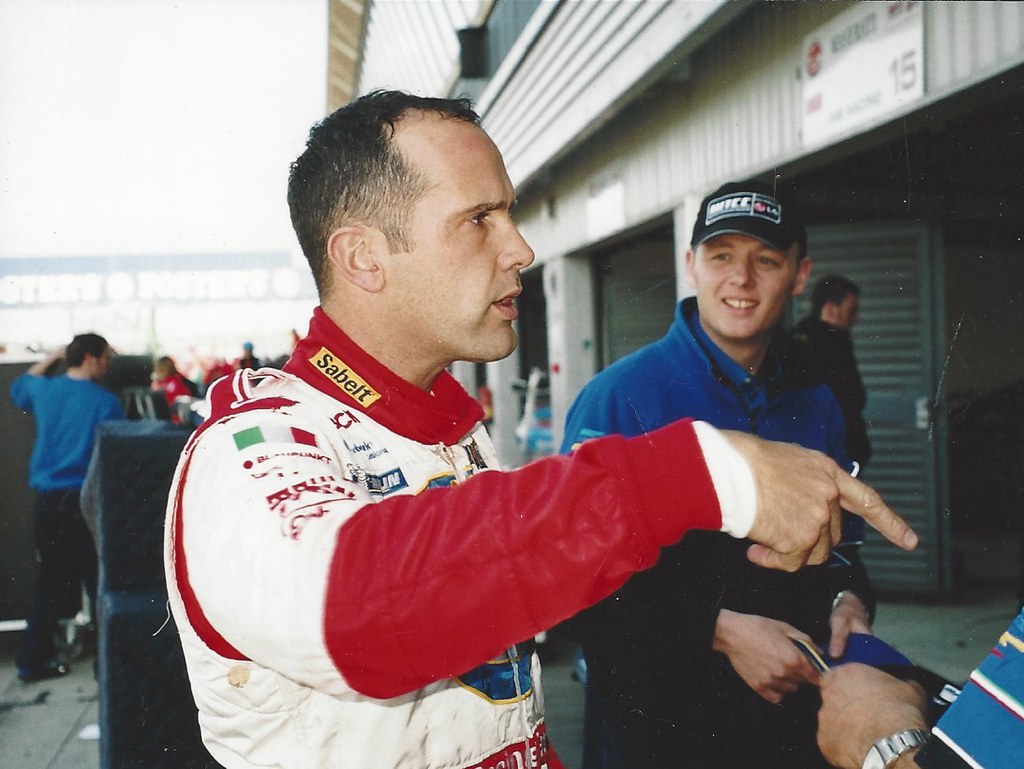 Giovanardi started his racing careerin karts before moving on to Formula 3 with Prema Racing in 1987 and then Formula 3000 between 1989 and 1991. However, he had been attracted by the possibilities of success in Touring Cars and for three years raced in the Italian Superturismo Championship with Peugeot. A switch to Nordauto in 1995 started his long involvement with Alfa Romeo, 1997 bringing a championship win in the Spanish Superturismo Championship, following this with an Italian Championship win in 1998. More championships followed in 2000, 2001 and 2002 before the BTCC beckoned with Vauxhall and Triple Eight Racing. This association yielded two more titles before a return to Alfa with N.Technology in 2010. Thereafter, Giovanardi’s racing has been spasmodic apart from a largely unsuccessful return to the BTCC in 2014 with a Motorbase Ford Focus. One senses, however, that he is ready for one more challenge and that he is more than happy to be back at the wheel of an Alfa Romeo.

At the time of writing, ex-Formula 1 driver Gianni Morbidelli has also signed to race alongside Giovanardi.

Just when we thought that perhaps there would not be any Giuliettas in the UK TCR Championship came news of a major effort being made by a team run by Derek Palmer which will have his son, Derek Palmer Jnr and BTCC regular Aidan Moffat as the drivers. Moffat, despite having raced a Chevrolet Cruze and then an A class Mercedes for the past four years is still only 22, having raced cars since he was 16. Palmer is 31 and started his racing career in the Dutch Supercar Challenge in which he raced for three years from 2006 to 2008 before moving on to the GT4 European Series and the occasional British GT outing. So, plenty of experience to call on.

Last weekend I happily sat at home and used the superb live streaming service offered by Goodwood to watch almost every race at the 76th Members Meeting – and what superb racing we were offered, despite the snow and wind, made even better by the quality of the camera work that took us right in to the heart of the action. And we had the pleasure of watching Patrick Blakeney-Edwards drive a 2300 Monza, painted an elegant blue, to victory in the Caracciola Sportwagonrennen with the red Werner 2300 Monza coming home in third place. Wonderful to watch the drivers at work, even more so in the John Bolster Trophy race which had the most amazing collection of one-off specials from the pre-war era. 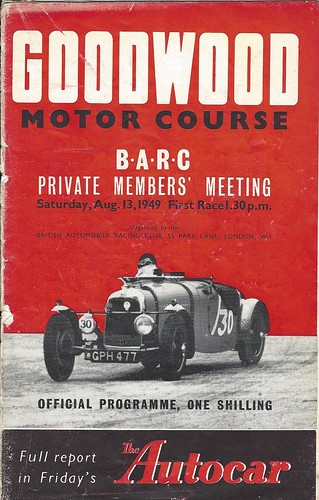 All this sent me scurrying to my collection of race programmes to confirm my belief that I had actually been at the very first Members Meeting on Saturday, August 13th 1949. Sure enough there was that “Official Programme. One Shilling”. I was amused by one comment by the Duke of Richmond & Gordon (previously Lord March) when interviewed on Sunday who said that Goodwood was not familiar with snow at race meetings – well I can remember the very first time that I took Diana to a race anywhere. Goodwood, 19th March 1960 (the 39th Members Meeting). The Formula Junior event – which included Jim Clark and John Surtees! –  had started in the dry. By the time the large field arrived at St, Mary’s it was snowing and when the cars got to Woodcote the flurries were following them. Happily it stopped almost immediately but it was very cold and I was surprised that Diana agreed to come to another race day – ever!

Life is full of coincidences

I have recently been indulging in more sorting, and in some cases thinning, my extensive archives which, as they include Autosport from the very first issue in August 1950, many years of Motor Sport and other titles, takes up a fair amount of space! However, taking an issue of Autosport from the first pile I came I across I saw that the date was April 14th 1983 – my birthday. Looking inside I found one of my favourite near-miss photographs, a print of which had also found in a Dealer Team box. 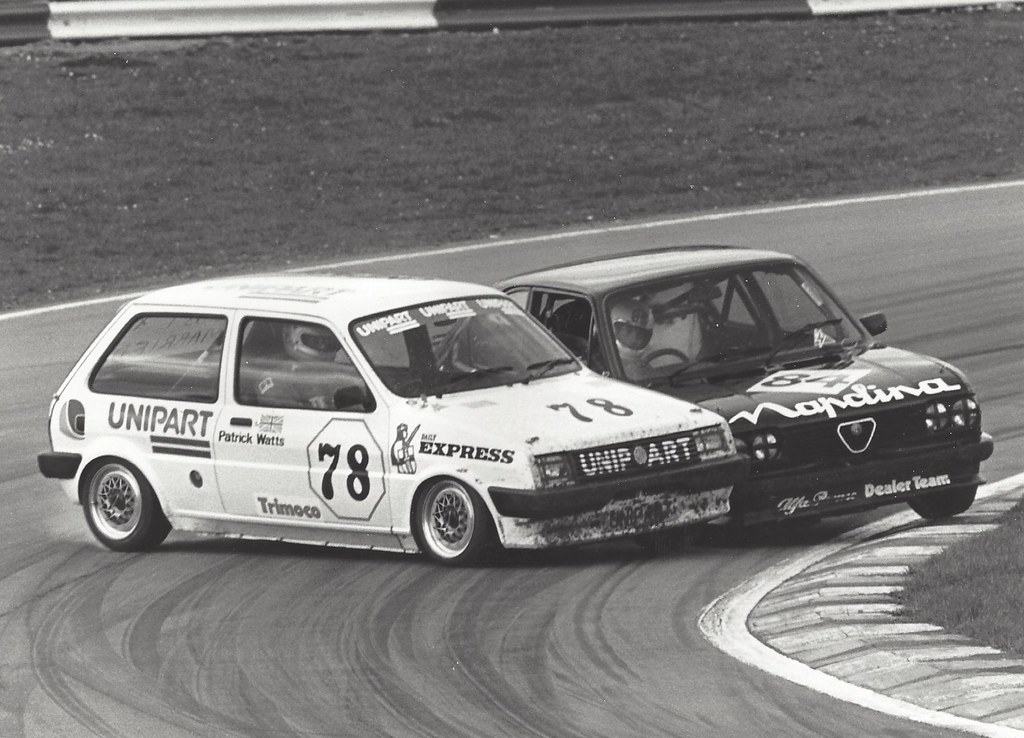 The race was a round of the “Trimoco Saloon Championship” at Brands Hatch and the caption read “Patrick Watts (MG Metro) and Andrew Thorpe (Sud) enjoy a bit of Come Dancing”. Ace photographer Jeff Bloxham took the picture at Surtees. Both cars were able to make it to the finish.

It was very sad to hear of the death on March 6th of one of the great names of the Autodelta period in the history of Alfa Romeo racing – Teodoro Zeccoli. It was Carlo Chiti who persuaded Zeccoli to leave Abarth, where he had been chief tester and join him at the newly formed ATS in 1962. A shortlived Grand Prix and GT programme left Chiti looking for a new challenge and this resulted in the formation of Autodelta to develop the TZ. 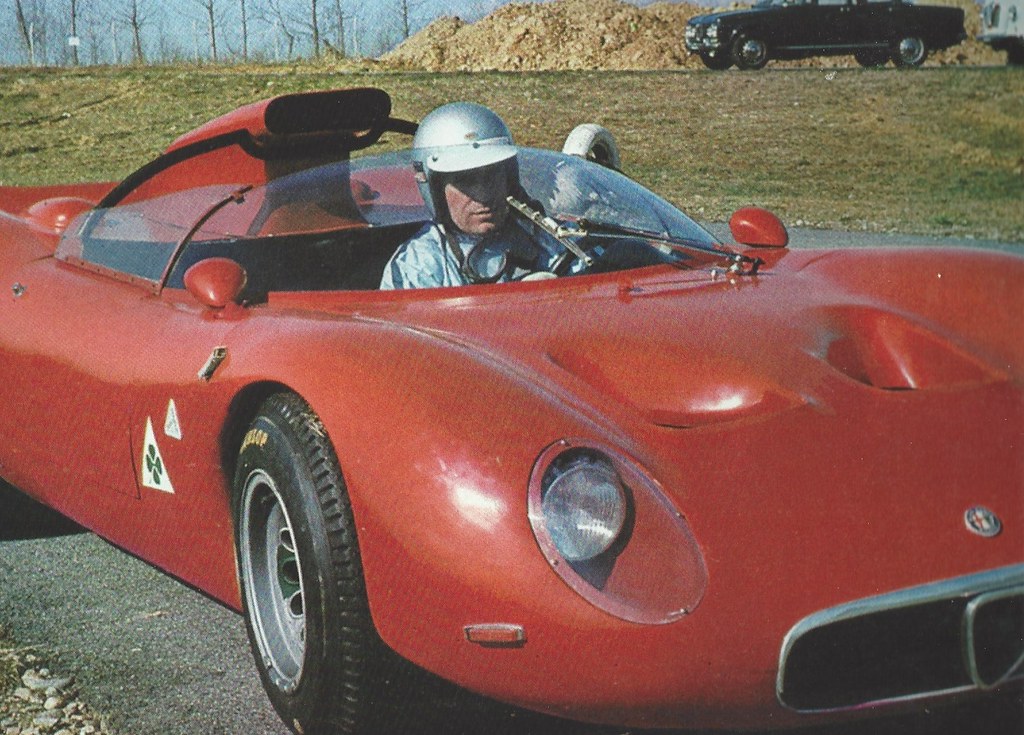 Alfa Romeo soon realised that Autodelta needed to be brought closer to Milan and premises were acquired at Settimo Milanese. This is where Teodoro Zeccoli became part of a team that included such names as “Nanni” Galli, Carlo Facetti, Spartaco Dini, Ignazio Giunti and Andrea de Adamich,  racing both versions of the TZ and the 1600 GTA before he became involved in the Tipo 33 project. It was Zeccoli who famously took the original 2 litre 33 on its first competitive outing,  winning the low-key Fleuron hill climb in Belgium. Thereafter, although he was involved in the development of such cars as the GTAm, it was the 33 in all its guises that occupied most of his time and he had particularly fond memories of the final 33 racer, the Fernet Branca sponsored  SC/12 Turbo, complete with 640 bhp at 11,000 rpm.

There was a rather disturbing article in last week’s Autosport by “special contributor” Stephen Lickorish indicating that in future the magazine will not give as much coverage to UK club racing as has been the case in the past. I took this to mean that championships such as ours could go from getting little mention to no mention at all. Results will be largely omitted, making the magazine no longer a resource for quick research, the argument being is that you can find them all on the internet. This ignores any back-up by the written word. Looking at the previously mentioned 1983 issue, the coverage of each meeting was so much better (photo quality apart). However, reading the article for a second time, it is clear that the emphasis will be on stories that concentrate on the drivers, the cars and interesting situations rather than blow-by-blow accounts of the races. Nonetheless,  with the number of Competition Licences apparently going down and the worries about attracting newcomers to the sport, I would have thought that a different approach was required that included good race reporting. Drivers like to see their names in print. It is all part of the ego trip!  Perhaps “Club Autosport” should be spun off as a separate title.

I was interested to receive an e-mail from Kevin Shortis, co-ordinator of Ford Racing UK (now with the BARC rather than BRSCC) saying that they will be taking part in a French Historic race meeting at Croix-en-Ternois over the weekend April 21st/22nd. This re-establishes a UK connection with the little French circuit near St.Pol and Arras that used to be visited quite often by British organisers who were able to run their meetings under an MSA permit. 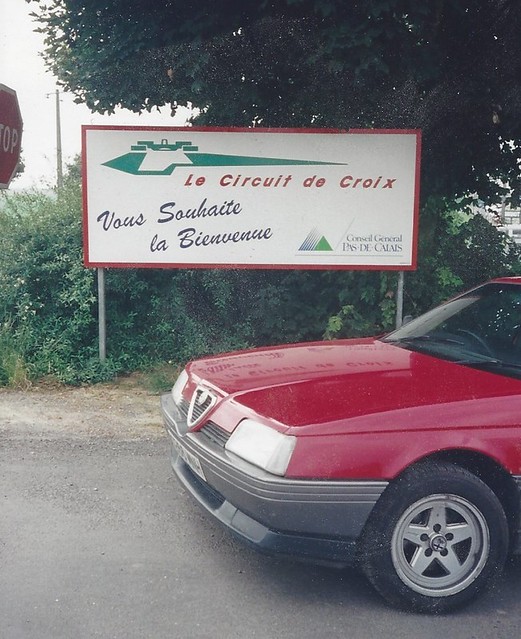 Many will recall that the Alfa Championship went there on five occasions between 1996 and 2002 and I thought that in a future edition of “Friday Fix” it might be amusing to look back at some of the races we held there and the drivers who took part.

Well you might get a chance this year as one of the Osella Alfa Romeo V12s from 1983 should be appearing in Historic Formula One races including, I would suspect, the race that is scheduled in this year’s British GP programme in July. The car in question, an FA1E, had been owned by ex factory driver Piercarlo Ghinzani since it originally raced but is now in the hands of Richard Hope. We will be watching its progress.