The Alfa Romeo name made its welcome return to Formula 1 last week when the new Ferrari engine Sauber broke cover for the first of this year’s four day tests. Leading up to the appearance at Barcelona there had been several additional sponsors added the car’s bodywork, including the familiar name of watchmaker Richard Mille, but with all white flanks there is certainly room for more as the season approaches. Team boss, 49 year old Frenchman Frederic Vasseur, has also given more details of developments at Sauber’s Hinwil base, facilitated by a major injection of Alfa Romeo money. ”We know that we are at the start of the project, and it will be a long term for us and Alfa Romeo. We have to improve step by step, and we have to increase the size of the factory and the headcount”.  When Vasseur joined Sauber from Renault after the sudden departure of Monisha Kaltenborn, there were 320 people working at Hinwil. “Now we are more or less 400 and are planning to recruit 50 more”.  Sauber already has a large modern factory and wind tunnel but Alfa money will undoubtedly allow further growth. 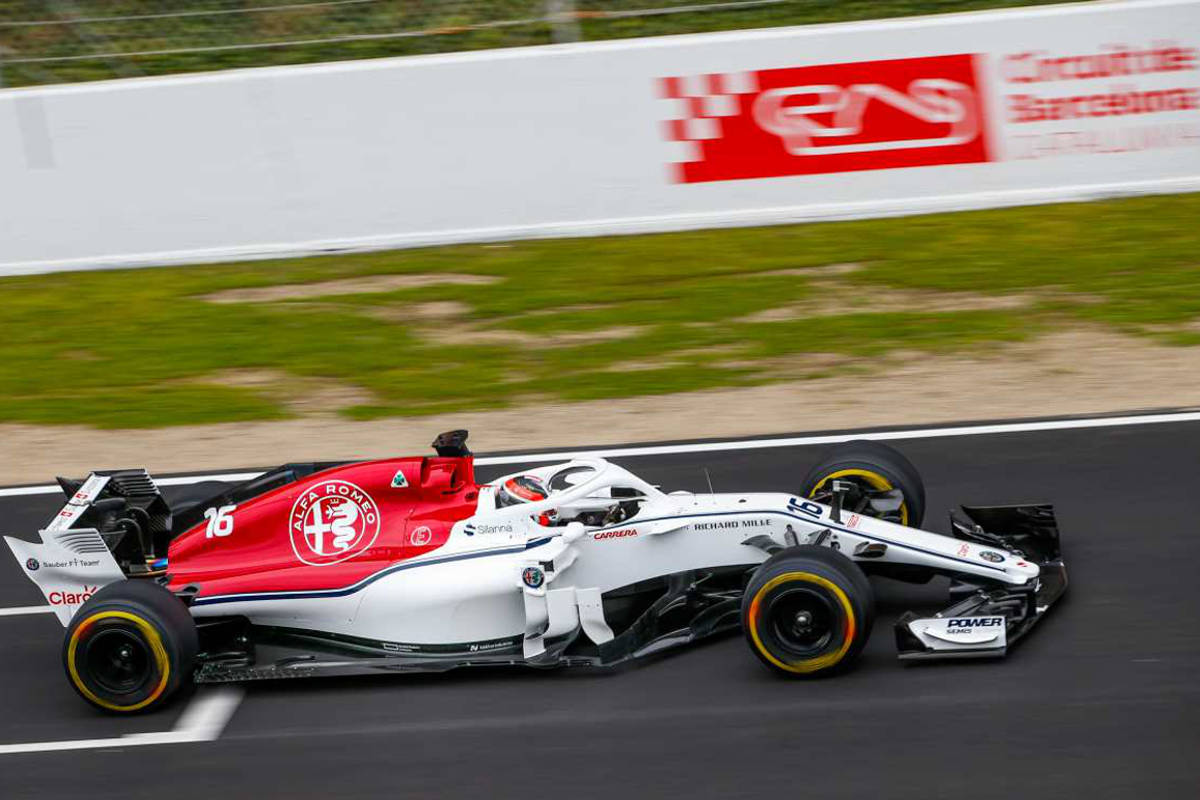 A first look at the C37 showed it to be a very tidy package that drew very favourable comments from ex Jordan and Jaguar designer Gary Anderson, Autosport’s technical pundit. One thing he probably didn’t notice was the unexpected presence on the engine cover of the traditional Quadrifoglio, Marchionne having reversed his previous decision to have it only on the new Ferrari. “Autosprint” had as its headline “Sauber-Ferrari bella sorpresa”. A subject of constant attention has been the introduction of the “Halo” driver protection device and its integration on the Sauber looks relatively neat. Generally, however, it is not a popular change and it has yet to be tested in “battle” should there be a major accident that requires quick driver extraction. Personally I prefer the fighter thickness “glass” windshield that has been tested recently on Indy cars. 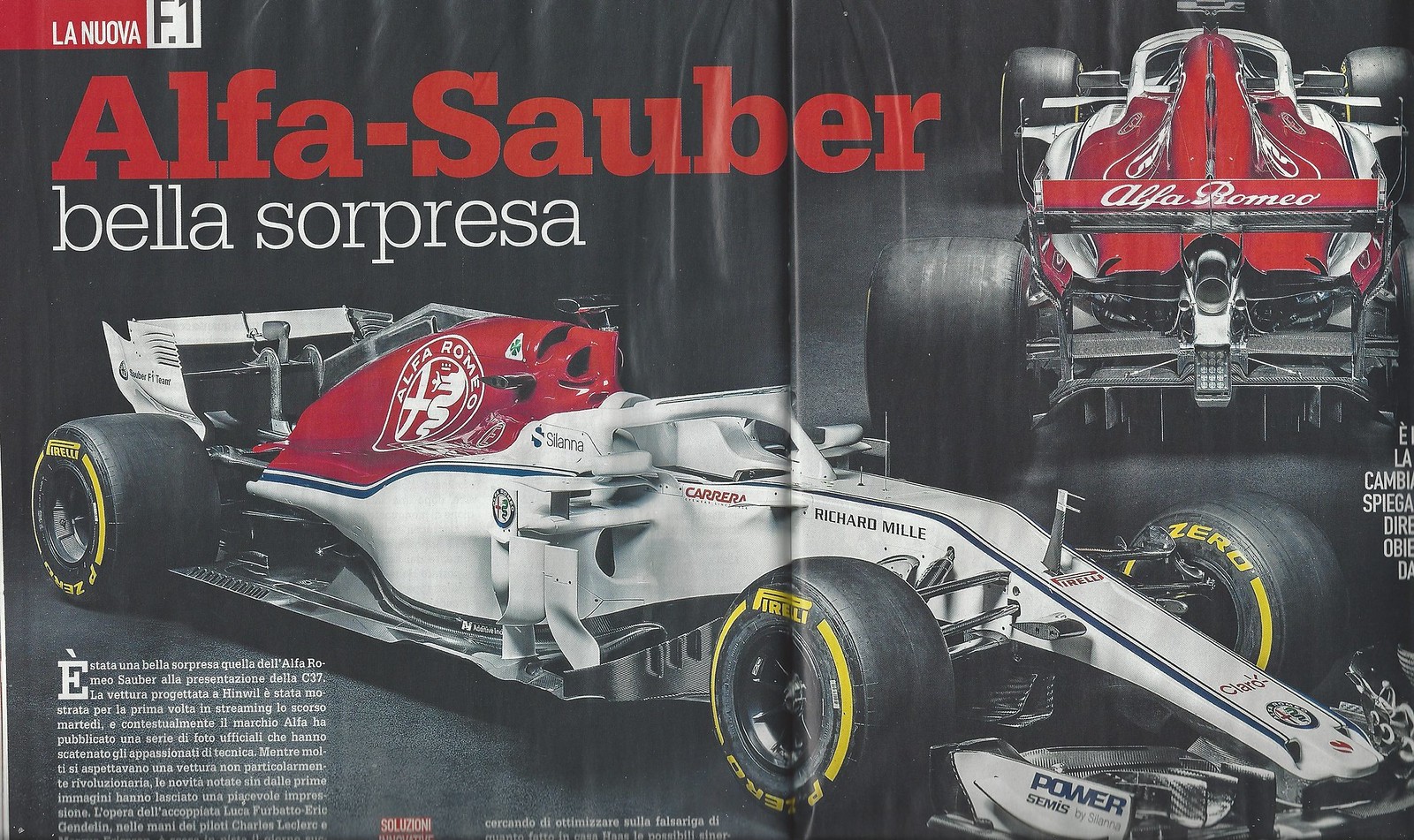 Testing itself was compromised by the weather and very low temperatures but if you regard the number of laps completed as “key”, then Charles Leclerc and Marcus Ericsson, Sauber’s contracted drivers, probably didn’t do too badly. They completed 138 laps on the final day as they shared the car after day three had been snowed off.  By comparison Vettel’s Ferrari managed 120 but top of the list with 147 was Pierre Gasly’s Toro Rosso Honda  – yes, you read that right! As far as lap times are concerned, It seemed that  teams such as  Ferrari, Mercedes, Renault and the now Renault engined McLaren (lost wheel apart!) were into their stride quite quickly. This week’s second four day session has told us a little more about where the Sauber might lie in the initial pecking order. Hopefully not 3 or 4” off the pace. Gary Anderson, again, despite his original view wasn’t very impressed by the Sauber’s progress and put it bottom of the pile on times adjusted for tyre use.

There has been quite an improvement in the C37’s performance and over the first three days both drivers were able to notch up a considerable number of laps using difference tyre compounds. Sadly, though, everyone else has been going quicker too and although, on Thursday, Marcus Ericsson ended 7th quickest, his best time (1’19.244”) was just over 2” slower than Vettel’s Ferrari, both on Pirelli’s Hypersoft tyre. More worrying perhaps was the speed on the Ferrari engined Hass – 1’18.360” on Supersofts. Thursday saw Charles Leclerc hit the barrier lightly early on, the driver lambasting himself on social media for his error so early in the day. The team managed to get the car back on track for the afternoon running, Leclerc completing over 50 laps with a best of 1.19.118” on Hypersofts. This would leave him 9th quickest, fastest time being set by Raikkonen’s Ferrari on 1’17.221” there is  clearly a lot for Sauber to do, even to catch Hass,  before everyone takes to the track again  in Melbourne’s Albert Park on 23rd March. 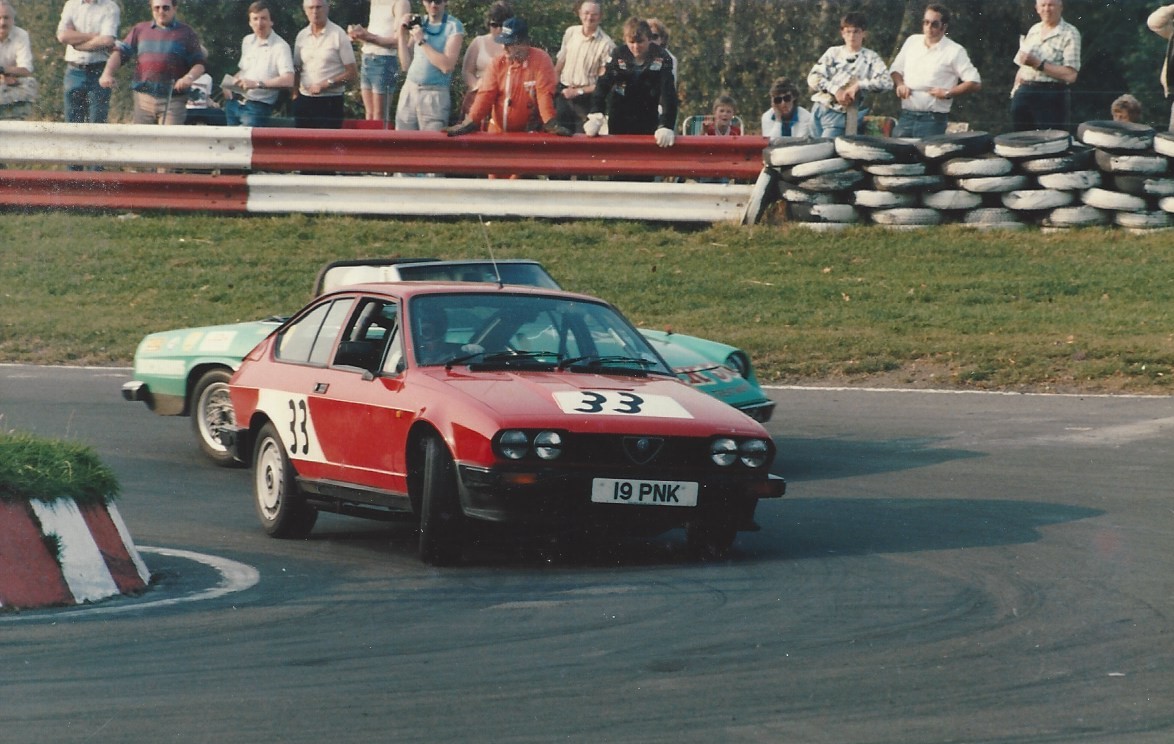 The appearance of Ian Jacobs on the BRSCC stand at the “Autosport” Show and our subsequent descent into a bout of nostalgia reminded me of one of the greatest rivalries in the history of the Alfa Championship. It occurred in 1985 and 1986 when Ian entered a green 2000 Spider, eventually sponsored by Alfa dealers, Romford Market Garage, in the then Class B. Here he found himself up against the GTV6s of Bob Buttery and Richard D’Cruze and several quite rapid Alfetta GTVs, including those of Joel Wykeham and Micky Bolton. At the start of 1985 the GTV6s shared the class wins between them but by Round 5 at Castle Combe, Ian was well into his stride, taking the first of six wins during the season and winning the championship class by 10 points from Bob. In the second half of the year, class B more often than not ran in a big field with Class A (later to become F). This meant that overall race wins were up for grabs as the modified cars had their own races. Despite the efforts of Peter Hilliard’s  Class A Alfasud Ti, Ian won overall by very narrow margins at Brands, Snetterton and Mallory giving Alfa enthusiasts plenty of entertainment on the way. 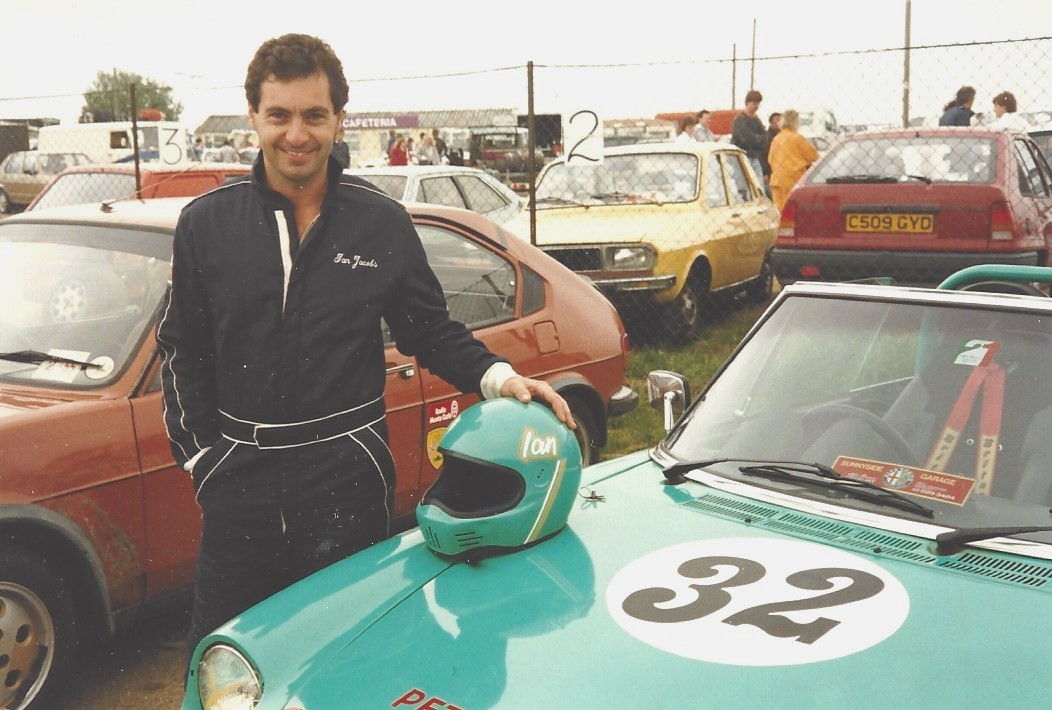 Ian intended to race the Spider again in 1986 but buying a new house delayed his appearance and battle didn’t resume until  round 3 at Snetterton where Bob Buttery won after Ian had spun out of the lead. Round 5, though, at Mallory brought a Jacobs win, Bob  getting his own back at Donington. So  it was back to Mallory again on August 3rd. In the AROC magazine, I reported that “the best spectacle was provided by the GTV6s of and the rapid 2000 Spider, in the middle of which Chris Sweetapple found himself thinking that a grandstand seat from behind was perhaps the best option before the end! Richard D’Cruze  led for most of the way – in fact until the final lap when he was outfumbled by the determined Mr Jacobs who. having fought wheel to wheel with Bob Buttery, was determined that a class win was his due. 0.6” covered all three cars at the flag!”. 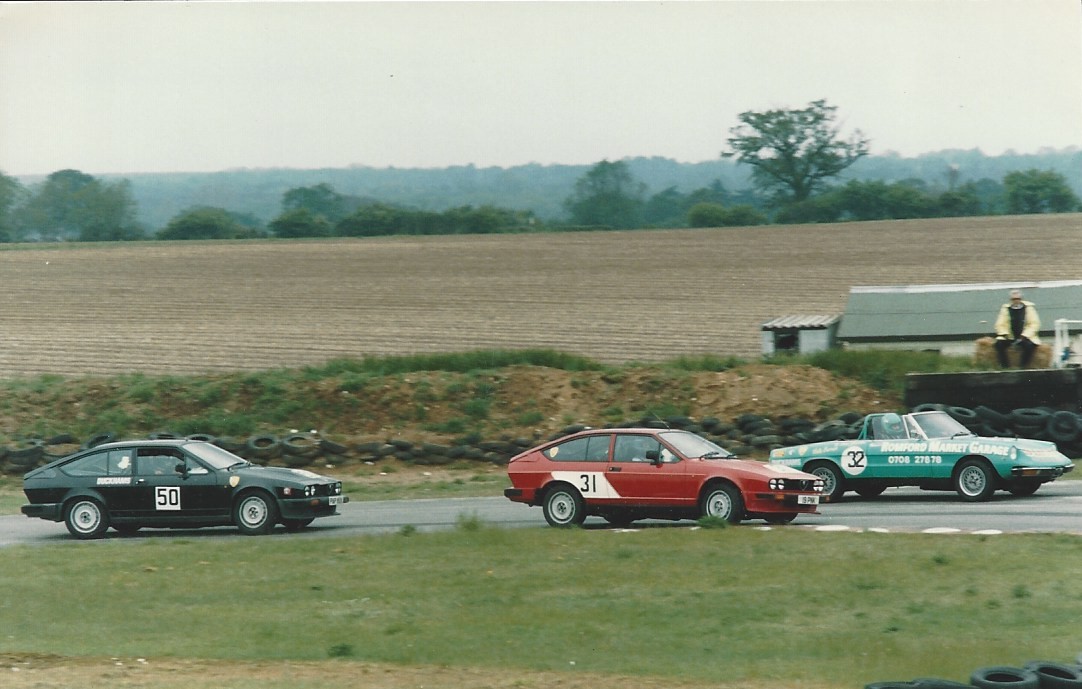 There is a follow up to this story. After the race, Tony Phillipson (then AROC assistant Competition Secretary) came rushing down from the hairpin to find me in the paddock. “What are you going to do about that Jacobs?” he shouted. Before I had had time to think, Ian himself was the other side of the car roof I was leaning on – “I hear you’ve been criticising my driving!”.  An argument ensued as a result of which Ian stormed off saying he wasn’t going to race with us again. And he didn’t, selling the Spider to Colin Burnes. This was a sad outcome but I am happy to say that Ian and I are now always happy to see each other and recall the past. These days he races mostly Historic F3 in France on splendid circuits like Clermont Ferrand but does have a Fiat 124 Spider that he raced in the all Italian race at the 2016 Festival Italia. It has since had some work done on it and I told him that he could come back and race in the Championship with our new “welcome Fiats” rules.

We hope to look back at some other great rivalries as time goes on.

Familiarity Breeds…? Something or other 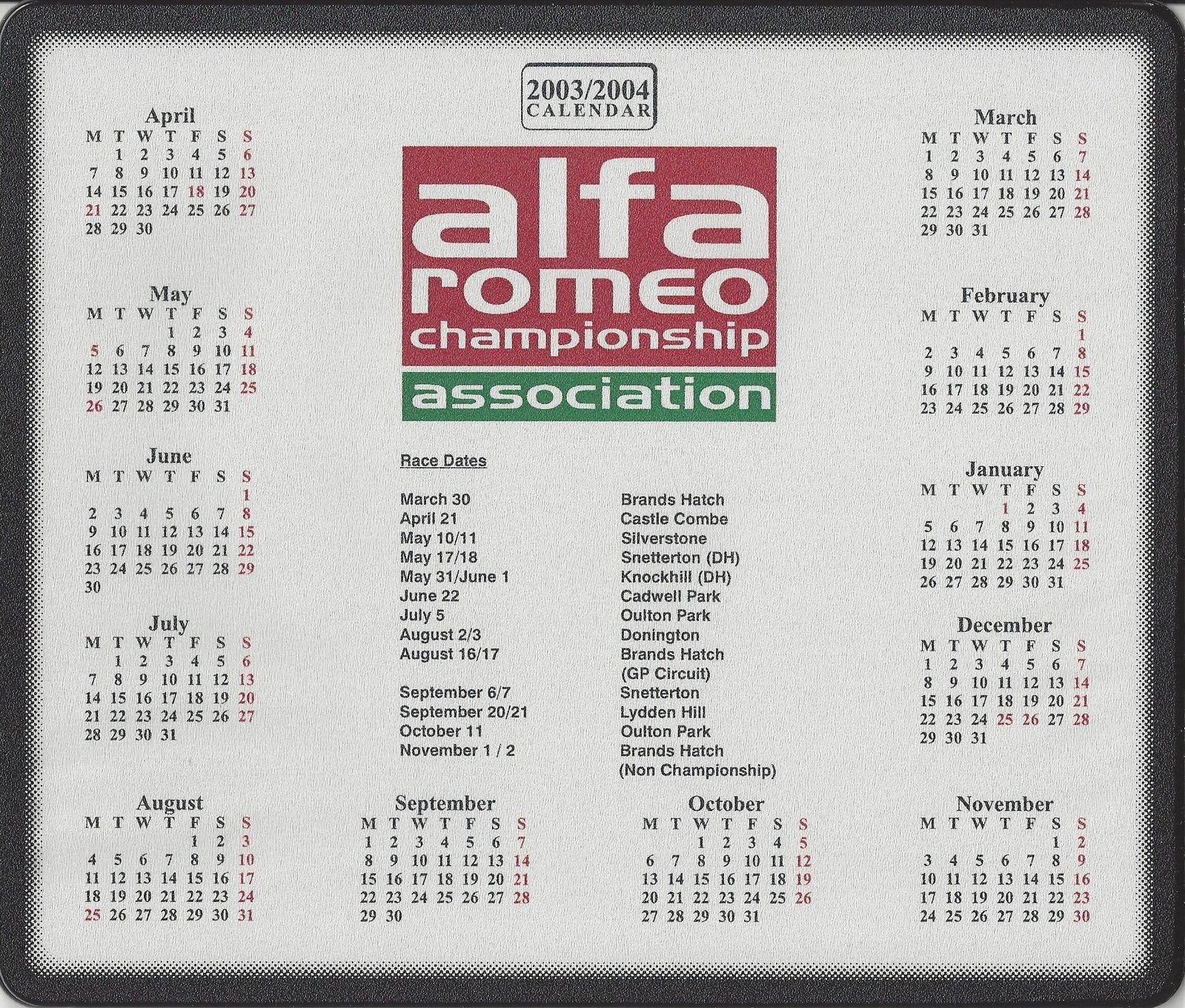 How often do we use quite simple things without thinking about them very much. Well, I have a mouse mat with a difference beside my computer that is probably one of the best promotional items ever produced for ARCA. It shows an April 2003 to March 2004 calendar plus all the 2003 race dates. Must be quite strong too as it is now 15 years old and shows no signs of wearing out. I do have a spare though…………

The organisers of the TCR UK series have postponed the series’ official Media Day that was supposed to take place at Silverstone next Tuesday, March 6th. Apparently it clashed with the press day at the Geneva Motor Show as a result of which several manufacturer and press representatives could not be present. The day was still be used for testing and a new Media date will be has been announced in due course for March 30th. CEO Marcello Lotti met with several prospective teams the other day to ensure them of his optimism that the series will be a success and that up to six cars from abroad will be at Silverstone at Easter to bolster the grid numbers for the season opener.

The Romeo Ferraris Team have been at Monza over the past couple of days and were able to call upon the experience of Fabrizio Giovanardi, Gianni Morbidelli and Kevin Gleason to test their World TCR Giulietta. Michaela Cerrutti, Ferraris Operating Officer, says that they were keen to amass more information before the cars go to Barcelona for the WTCR Group Test. No drivers have yet been signed for 2018 but we know that the race team will be run by Mulsanne Racing who have been involved before. It is possible that 2017 regular David Kajala will be in the car today.

The first of the Alfa Romeo Owners Club’s main 2018 dates is Spring Alfa Day which will return on Sunday April 22nd to the always popular Imperial War Museum at Duxford airfield near Cambridge and close to Junction 10 of the M11.