The 2019 Championship season came to a very satisfactory conclusion at our Awards Dinner on 16th November as we contemplated the move in 2020 to the 750 Motor Club after a 38 year stint with the BRSCC.

Naturally, we hope that joint efforts in our new “home” will encourage larger grids but it is sad to see that club racing as a whole may suffer under what “Autosport” is pleased to label a “A New Strategy for National Motorsport” offered by the governing body, Motorsport UK.

It was a very enjoyable and relaxed gathering at The Brandon Hall Hotel, near Coventry on November 16th as we congratulated overall and class winners Tom Hill (overall and Twin Spark Cup), Dave Messenger (Power Trophy) and Mervyn Miller (Modified) on their successes in 2019. Our thanks must go to Andy and Linda Robinson for organising the event, helped as ever by Keith and Sue Ford and Roger Evans and Joy Fairy. We are also grateful to those who donated the many raffle prizes and perhaps even more so to the generosity of those who bought tickets, contributing over £800 to ARCA funds. And we should not forget the very challenging quiz produced by Kevin Evans which saw much head scratching before the Bianco table were adjudged the winners.

Natalie Ford was, as usual, on hand to take the photos of the prize giving but I can add a few from around the tables – 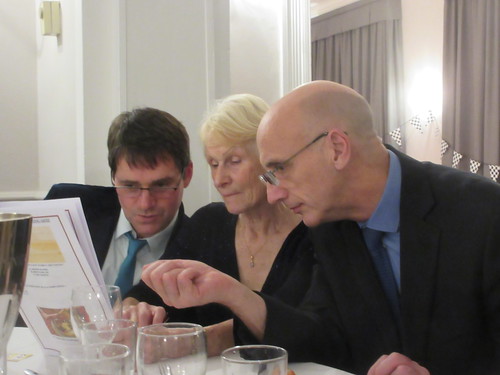 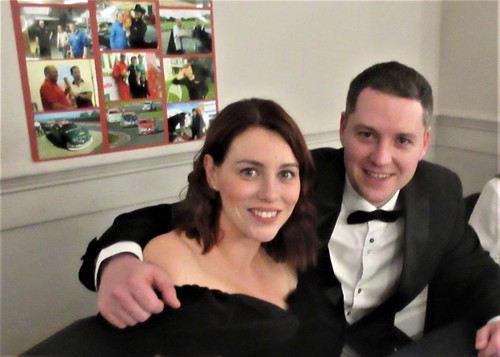 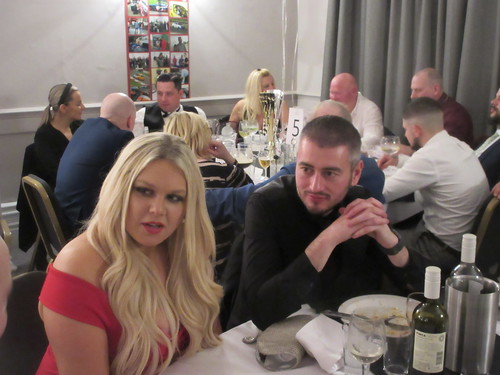 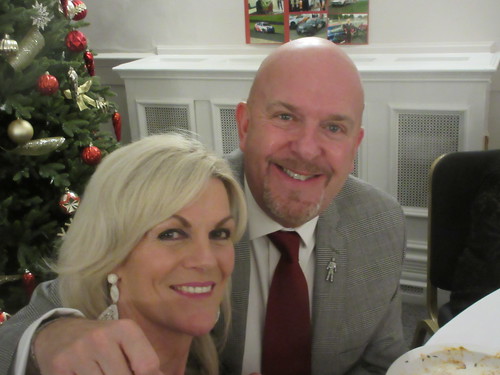 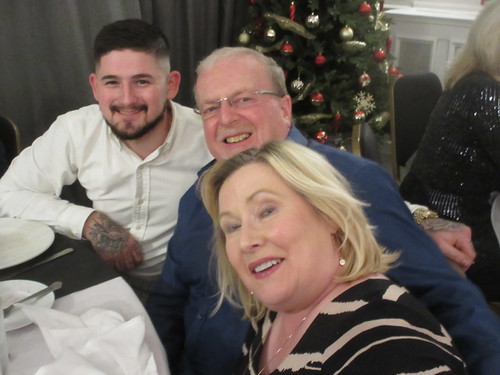 At a time when Club racing needs all the help it can get to maintain or reverse the slide in the number of licence holders and grid sizes, it seems perverse and self-serving for the governing body of motorsport in the UK to introduce a raft of measures that will push up the costs for everyone competing in 2020 and the foreseeable future. Most notably though, it all seems weighted against the club racer. The old National B race licence will disappear, to be replaced by a new Interclub licence at cost of £99 as against the old £64 (a 54.7% hike) while National A will become National, going up from £101 to £155 (53.5%). By comparison, anyone with an International licence will be looking of increases of around just 3%. Event permit fees paid by the organising clubs (per driver) will, in the case of an Interclub race meeting go up 19%. Add to this, the inevitable rise in circuit hire fees by the likes of MSV and Silverstone, and where does that leave us? Extra costs will be passed on to competitors although the organising clubs will certainly have been aware of such increases when setting their entry fees for next year, so the worst may not be felt until 2021. For drivers aged between 45  and 60, there is one positive saving in that a current medical will not be require when applying for a licence. In conclusion, where is the much vaunted encouragement to the grass roots of motor sport?

The 28th November issue of “Autosport” carried a survey of entries across the whole Club Racing spectrum during 2019. The BRSCC list showed some fairly big numbers with, as expected Mazda and the BMW Compact Cup topping the list. Undoubtedly our own better entry numbers at Festival Italia and Donington kept us off the bottom, with an average over the season of 16. Of the bigger clubs, it was encouraging to see 750 MC heading the list with an average of 26 across all championships,  with BRSCC on 22, MSVR 20 and BARC 19. No less than 177 Championships were covered in the survey.

The final two GPs, in Brazil and Abu Dhabi, produced markedly different results for the Alfa Romeo team. At Interlagos, they were able to ride their luck as chaos reigned around them to finish 4th and 5th, in the order Raikkonen/Giovanazzi , while the Abu Dhabi race brought out some of the less good traits of the C38 once again, keeping both cars out of the points, 13th and 16th with Raikkonen once again leading the way.

To end the season with only Williams behind them in the points table was hardly what any of the Sauber run team expected but the mid grid battles have been so intense that it needed a car that looked after its tyres better and benefitted from continuous development during the season to keep up.

Undoubtedly Alfa Romeo will be hoping for something better in 2020 and will be questioning whether the team has the resources as currently structured to make the grade when the new regulations come in force in 2021. One thing I am somewhat perplexed by. The FI Commission has agreed to a change of name by Toro Rosso to “Alpha Tauri” which is apparently a clothing brand owned by Red Bull. Commentators will no longer be able to refer to just “Alfas” or “Alphas” as this will cause some confusion – did Alfa Romeo not object?

Happily there are no clashes with Alfa Championship races (so no rushing from Castle Combe to Silverstone on a Saturday night!). After his experiment at Lydden Hill in May, running an HRDC only meeting only a week before Thruxton, Julius has been encouraged enough by the response to repeat the event again although, this time, well away from his other dates. 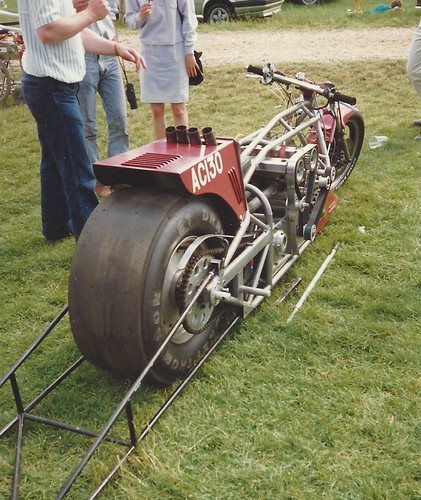 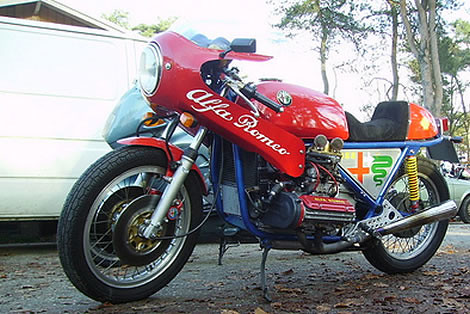 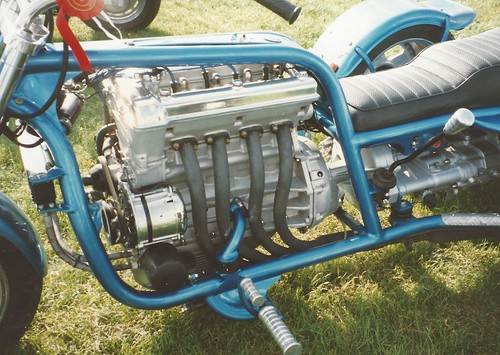 National Alfa Days at Stanford Hall often used to attract some weird and wonderful Alfa related “vehicles”, no more so than an Alfa Romeo Nord engined dragster that appeared one year and a couple of trikes, one with a Boxer engine. I thought I would google them and the result was more than I expected, including a V6 engined trike! I also found a couple of photographs from Stanford Hall and if anyone knows more about these examples, I should be pleased to hear from you.

The end of the racing season is usually an opportunity to catch up on a bit of reading but this year I decided to take from of the bookshelves some books that I hadn’t looked at for a while. The first was “Reims, Vitesse, Champagne at Passion” published in 1994 which must be one of the most detailed histories written about any circuit although it lacks somewhat in clear and good sized photographs. But if you want to know who raced at Reims and how they performed, it is all here, covering the first meeting for bikes and cars in 1925 until the circuit’s final races for cars in 1969 and bikes in 1972.

The French Grand Prix was first held there in 1932 when Tazio Nuvolari took his P3 to victory ahead of Borzacchini and Caracciola to claim an Alfa 1-2-3. What is notable, is that the race was run over 5 hours (461 miles) at an average speed of 92.32 mph. The part banked Montlhery track, on the outskirts of Paris, became the home of the French Grand Prix for the next five years, so it was not until 1938 and 1939 that the race returned to Reims. The Mercedes and Auto Union teams were now totally dominant and the only Alfas to appear were the type 308s of Raymond Sommer and Luigi Chinetti although that was mainly due to growing political tensions at the time.

Everything had changed after the war. There were no German teams ruling the roost and it was Italy’s Alfa Romeo and Maserati and French Talbot-Lagos that led the way. The French Grand Prix would return to Reims in 1948 and Alfa entered three 158s for Jean-Pierre Wimille, Alberto Ascari (on a one-off appearance) and Consalvo Sanesi who filled the front row of the grid for the 64 lap (3 hour/309 mile race). Wimille emerged as a comfortable winner but only team orders would rob Ascari of a well deserved 2nd place. The average speed on this occasion 102.96 mph. Alfa didn’t race in 1949 after the death of their star driver, Wimille, during practice for a race in Argentina but they were back in force in 1950 for the inaugural World Championship season. Their team of drivers was the legendary “Three F’s” – Fangio, Farina and Fagioli – who dominated the front row and the race which was won by Fangio, the speed now up to 104.84 mph, from Fagioli while Farina would retire. Third placed Peter Whitehead was 3 laps down with his private Ferrari.

Alfa Romeo’s final visit to Reims came in 1951 and it looked as though it would only be a matter of time before the 4.5 litre Ferrari took its first win. Alfa had entered four cars for Fangio, Farina, Fagioli and Sanesi and Ferrari three unsupercharged 4.5 V12s for Ascari, Villoresi and Gonzalez. Fangio, Farina and Ascari made up the front row and it must have been a fine sight for the large crowd that filled the grandstands and lined the straight from the Thillois Hairpin past the pits, as the 23 car field blasted away towards Gueux village with 77 laps (374 miles ahead of them). It required cars to be shared before the 1st and 2nd places were eventually decided (quite normal in those days), Fangio/Fagioli winning at 110.97 mph after nearly three and a half hours, from Ascari/Gonzalez with Villoresi 3rd.

When the Grand Prix returned to Reims in 1953 (after a visit the previous year to Rouen), the circuit was very different and the race was run to Formula 2 regulations. Gone was the Gueux village section, replaced by a fast right hand corner after the pits, leading to a new piece of track to the Muizon hairpin,  although the overall length stayed much the same at just over 7 kilometres. Racing would go on until 1969 for cars and 1972 for bikes, including several 12 hour Sportscar races that started at midnight!

I last visited the circuit in 2001 and it was clear that some efforts had been made to stop all the old buildings from crumbling, including the removal of trees that had grown in the middle of the main grandstand while there had been the odd lick of paint here and there. Much of this may have been due to a major historic, but non racing, event that had been planned there for July 1997 under the title “12 Heures de Reims” but which never actually took place. Les Amis du Circuit de Gueux have encouraged a number of small scale events over the years and it is still possible to drive most of the old original circuit and to imagine how it must have been to see and hear Alfas, Ferraris, Mercedes, Auto Unions and Talbots howling down those long straights.

After their BTCC test outing at Snetterton in the summer, it is disappointing to hear that Rob Austin and HMS Racing will not after all be appearing in 2020 with their Giulietta. Hopefully this is not the end of the project and that 2021 will see them back again.

The World TCR has not been a particularly happy hunting ground for the Team Mulsanne Giuliettas this year but they did end the season in style on one of the most challenging tracks of all – Macau- when Kevin Ceccon took two excellent third places.

Next Time – ARNAs in the Alfa Championship

In the next Friday Fix we are hoping to take a look at an unusual model that had an unexpectedly successful life in the Alfa Championship, including an overall win for Dave Streather and Class F victory for Nick Baughn.