We hope that you have enjoyed reading Friday Fix during 2020 while we have tried to keep you entertained with stories from the history of the Championship while also recalling some of the drivers who have contributed to 39 successful seasons.

And with over 750 who have taken part since 1982 there is plenty of scope! While leaving the Championship during the season to the excellent race reports and previews from Andy Robinson and Keith Ford I have kept an eye on other areas in which Alfa are involved, including Formula 1 and World TCR, not forgetting the Classic Alfa Challenge which suffered not only from cancellations but also a complete washout at Castle Combe in October. However, in this pre-Christmas issue, I will diverge slightly by looking at my own personal key moments during the restricted 2020 season during which I was able to attend three of the four meetings where we raced – Snetterton (twice) and Brands Hatch – missing only Oulton Park.

Highlights (and some disappointments) in 2020

Apart from the obvious disappointment of having our 2020 season curtailed, I suppose the highlight was that of having any racing at all. Congratulations to Motorsport UK, the 750 Motor Club, and the circuit owners (notably MSV) for making it possible That apart, there were things in the Alfa Championship that caught my eye.

A Highlight was the battle at Brands Hatch in August between George Osborne in his beautiful 75, now with 3.2 engine, and Jamie Porter’s splendid Giulietta engined Mito turbo, driven by Riccardo Losselli. This was Riccardo’s second meeting with the Mito having taken over for the car’s debut at Snetterton from Ted Pearson, who was in hospital for a long awaited operation.  At Brands Riccardo took full advantage of the chance to drive the car again. going through Paddock side by side with George in race 1 on a slippery track was a master class although George won in the end. We look forward to seeing them both out there in 2021.

Biggest Surprise came with Tom Hill having an accident at Brands as he misjudged his braking into Paddock and slid straight on into the barrier just in front of us.  Luckily it was all less destructive than it might have been but it wasn’t Tom-like at all. But of course, he did go on to wrap up his fourth Championship title, this time with Roger Evans running the newly built GT V6 under the Revs Italia banner

It was a Disappointment to see so little of Jamie Thwaites with the red (on one side) and black (on the other) 155 V6. He suffered an engine problem at the first Snetterton while the bonnet came loose at  Brands and smashed into his windscreen.

Pleasure Moment came when Matt Daly was entered at Oulton driving David Faithful’s Mito. The weather hardly helped him in a car that he had never driven before but, as so often in the past, he showed his adaptability and I hope that he will have more chances to develop the car.

Best Noises of the Year were undoubtedly those of the V6 engined cars singing down the Bentley Straight towards what used to be called, much more descriptively, the Esses – Graham Seager’s GTV 3.2, the 156 GTAs of Dave Messenger and Andy Inman, the GT of Tom Hill and 75 3.2 of George Osborne – all making that wonderful sound!

For me a Personal Lowlight was not being able to go into a commentary box as the race circuits implemented a “Rule of 1”. At Brands I was able to keep contact with commentator Chris Dawes by phone and text from the Paddock which I think helped keep him up to speed.

A Gold Star to Andrew Bourke who, with his friends at Bianco, dominated the Twin Spark Cup in 2020, finishing overall runner-up and only being beaten once when his exhaust broke at Brands Hatch, bringing out a black flag.

Best Race Drive: Scott Austin for his win in the wet second race at Brands, building up a big lead (despite a spin) before a 4 lap safety car period and then holding off a determined Graham Seager to the end.

And Finally – Congratulations to Dave Messenger (and his team) and George Osborne who enjoyed a 100% reliable season, never off the Power Trophy podium. Richard and James Ford were others to suffer no retirements, so well done to them as well.

The season finished by with two point-less races for the Sauber Alfa Romeo team, However, there were some highlights in both races. At the Sakhir Grand Prix, Antonio Giovanazzi made it into Q2 and then finished 13th only a couple of seconds behind Vettel’s Ferrari in a frenetic race,  with Raikkonen not far behind, A week later in Abu Dhabi, Kimi had a scare when his car caught fire during FP2 but in the race had the satisfaction of beating both Ferraris to finish 12th with Giovanazzi making it home 16th. To finish 16th and 17th in the drivers’ championship and to come home as 8th best team was not exactly what Alfa Romeo could have hoped for but with a new Ferrari engine in 2021 and with Giovanazzi continuing to improve as a driver, they must be looking for a better season although for all the teams, 23 races (now approved) is going to be something of a stretch.

The young driver test at Abu Dhabi, with a couple of old hands including Fernando Alonso thrown in with Renault, saw Robert Kubica back for Alfa and being joined by Callum Ilott who should have had an FP1 outing with Alfa at the Nurburgring. Kubica ended the day 4th quickest, just 1.11” off Alonso while Ilott was a 8th, 1.49” adrift. Ilott has now been confirmed as Ferrari reserve and test driver for 2021.

At the end of last year, I asked how people were going to follow F1 races in 2020. Although I watched Channel 4 highlights, which was fine, I listened to all the races live on Radio Five Sports Extra (or the BBC Sport Website) in which Jack Nicholls, Jolyon Palmer, Jennie Gow and Andrew Benson described everything so well.  Yes, there was some silliness on occasions as they filled in during a very quiet practice (or none existent practice day at a wet Nurburgring) and I was tempted to send them the odd e-mail but never did.  It was sad to hear that our good friend Ben Edwards, who raced Mike Buckler’s 164 Diesel at Castle Combe back in 1993 and attended the end season dinner and prize giving that year, is retiring as lead commentator with Channel 4. His knowledge of formula 1 and infectious enthusiasm have been a highlight of GP coverage for many years, so he will be sorely missed.

A couple of faces from the past – well not so distant past I suppose – will be rejoining the Championship in 2021. GARETH HAYWOOD has bought the ex Graham Seager/Roger Evans GTV 3.2 and has already registered in the Modified class, Gareth raced with us between 2007 and 2009, with a brief return in 2012, starting with the ex Ian Fisher 156 Selespeed, converted to manual gearbox. He switched to 2.5 V6 power for a very successful 2009 season winning Class B after a close battle for points in the second half of the year with the Alfetta GTV of Nev Simpson.

Another planning a return (he was actually entered for the cancelled Silverstone meeting in November) is PETER SLOAN who was a regular competitor, as part of Avon Racing, between 1999 and 2006, firstly with a 75 Twin Spark in Class E and then a 3 litre V6 with which he won Class D in 2003. He made a return in 2010 with a Modified 2.5 V6 155 with which he scored class podiums at Oulton and Silverstone. In 2021 he will be racing the 145 that was built by Roger Evans to keep him racing while other projects came to fruition.

Although they weren’t absent from the paddock this year, KEITH & TOM WAITE will be back racing – KEITH in his well known 75 and TOM with the 33 in which he took his first racing steps at Brands Hatch and Donington in 2019. The car now has a 16v engine and has been registered in the Modified class.

At the end of FF100 inSeptember we promised to run some more pictures from those three season that we were not able to use at the time. So here is a selection which we hope you will enjoy and will jog memories 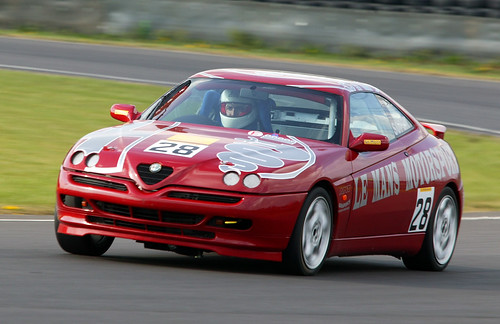 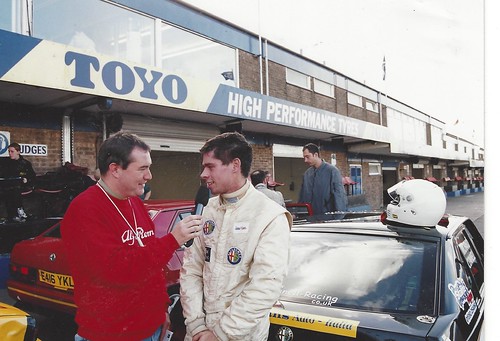 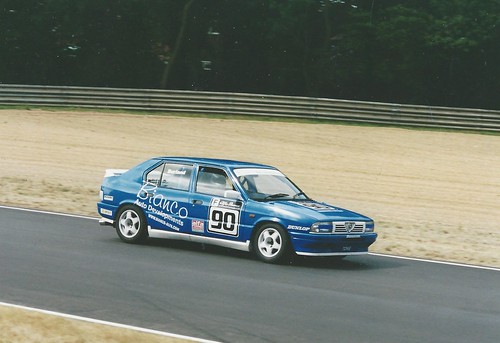 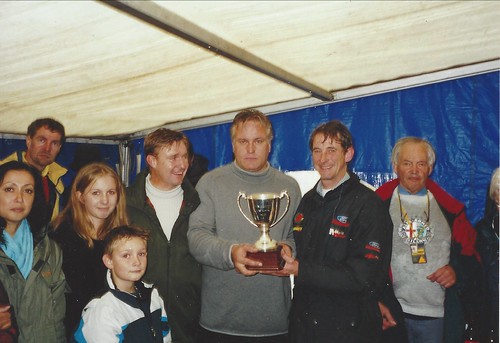 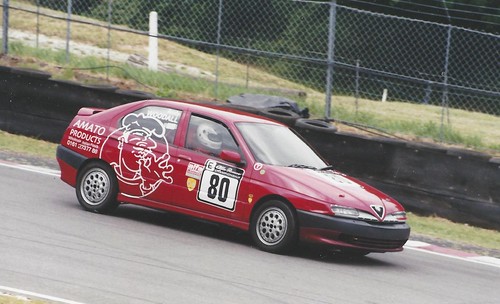 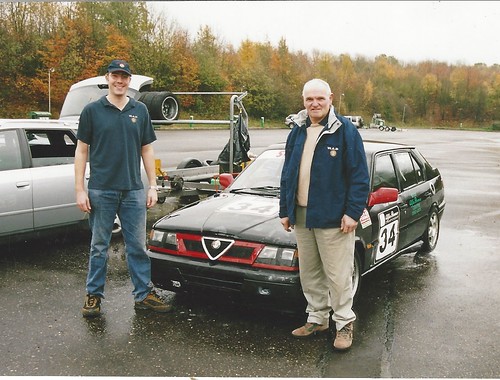 David Hughes and Will Dick 2004 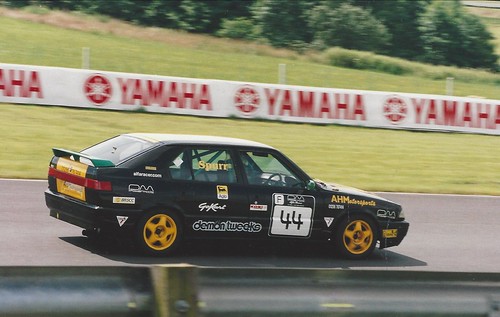 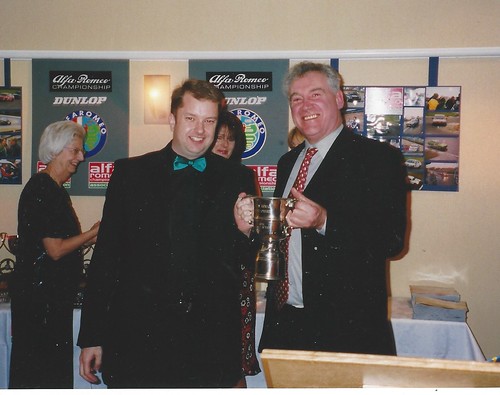 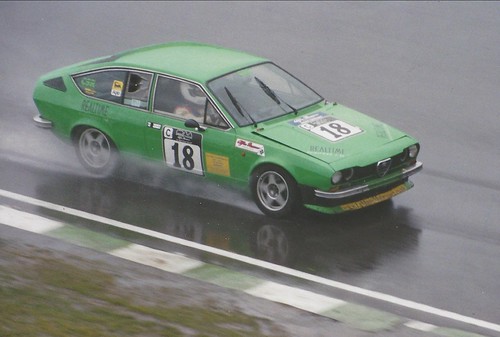 Nev Simpson on a wet day with the Alfetta 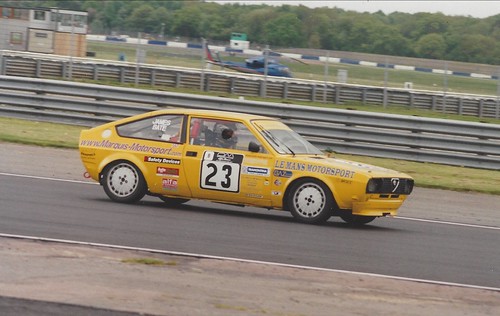 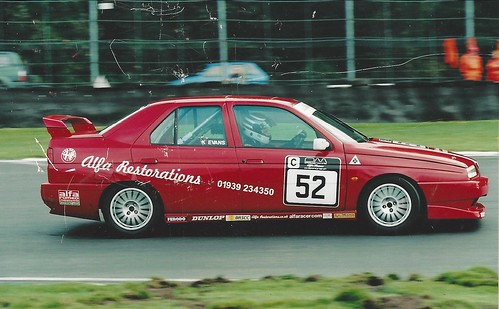 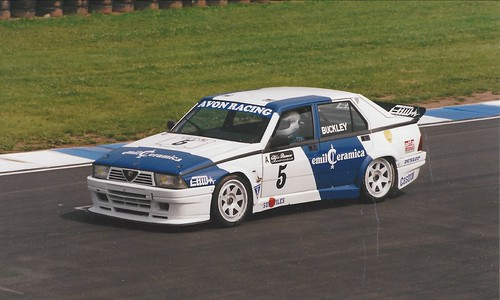 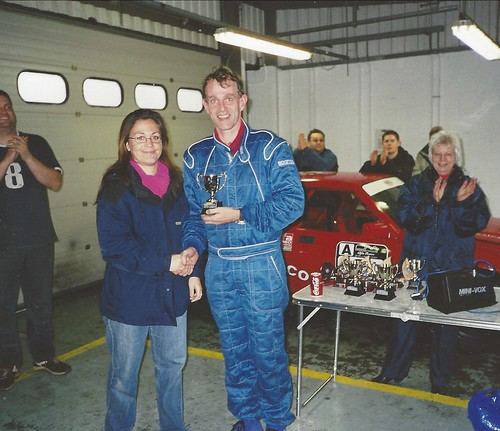 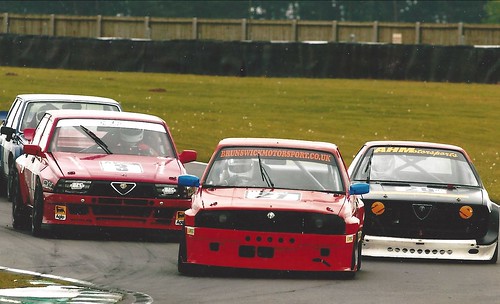 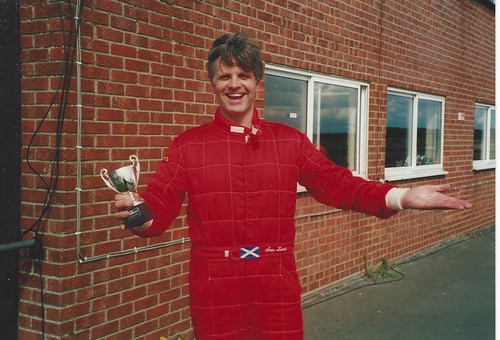 A happy Sam Laird after a win at Snetterton 2002 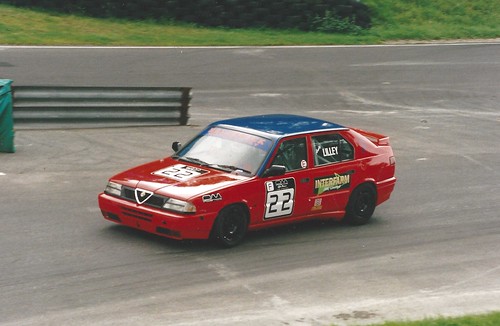 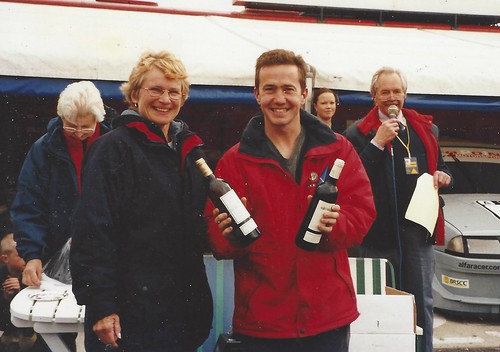 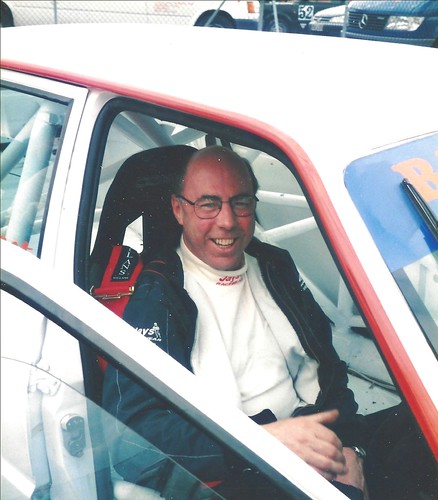 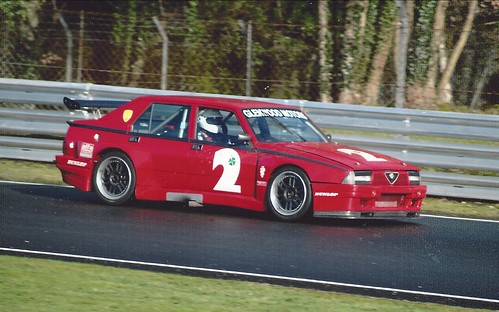 Julius Thurgood has been remarkably quiet since the Classic Alfa Challenge suffered a washout at Castle Combe in October, so it was a pleasure to hear from earlier this week, complete with a provisional HRDC 2021 calendar. As he put it “Much hard work and protracted negotiations have gone into bringing together a well rounded season that encompasses some new challenges as well as HRDC favourites”. The meetings that include the Classic Alfa Challenge are as follows –

We are particularly pleased that the Classic Alfas will be at Brands as this should make for a fantastic Alfa racing weekend, and with “Auto Italia” on board again as a sponsor we have the promise of excellent post event coverage.

I wish I could remember what Keith Waite, Andy Page and Jonathan Griffin were saying as this speeding scooteristi whizzed passed them in the paddock at Spa in 2000.

We end by wishing everyone as enjoyable a Christmas as the tier structure and bubbles will permit and look forward to getting vaccinated for a better 2021! And my own personal thanks and best wishes to Matt Daly for turning my copy and pictures into a Friday Fix so quickly each time.