FESTIVAL ITALIA, to be run this coming Sunday at Brands Hatch, looks as though it will be another step towards establishing the event as the premier all Italian racing and owners club day of the year.

After the success of the 2016 “Festival Italia”, we had been looking forward to seeing how MSVR might develop the concept and the 2017 version will certainly be all action from the start of Ferrari practice at 10 a.m. through to a car club parade at 6.25. The event is being sponsored this year by Abarth UK and will incorporate Abarth and Lamborghini demonstrations, historic formula 1 cars and much else besides. Competitors in the BRSCC Alfa Romeo Championship will be taking part in rounds 11 and 12 of this year’s title chase, with 20 minute races at  1.30 and 4.25. 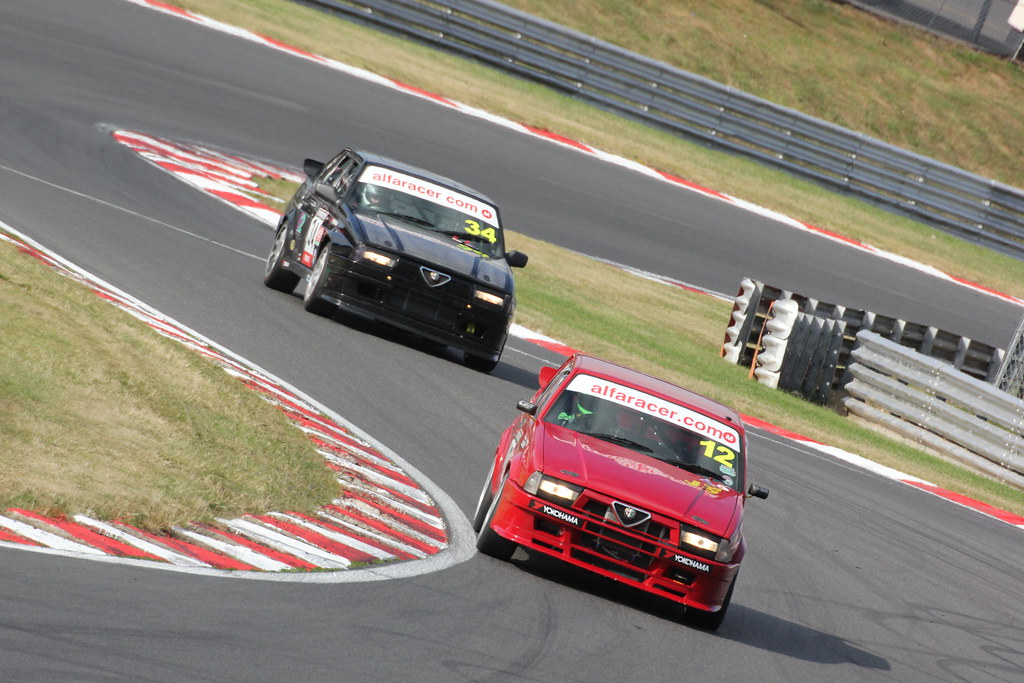 Many who were at Brands for the inaugural Festival last year will remember the frightening accident Paddock Hill Bend when Andrew Bourke rolled his GTV a number of times and became front page news in the national press. That he emerged unhurt was something of a miracle but who would have expected that his next appearance at Brands would see him leading the 2017 Championship ahead of last year’s winner Tom Hill. 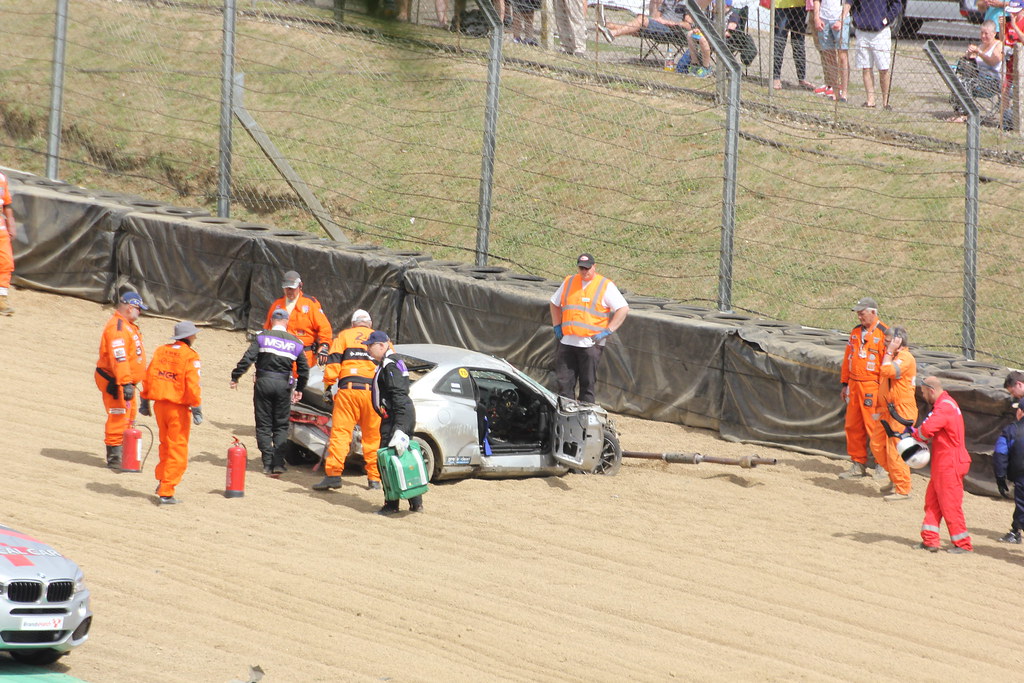 Andrew has had a splendid season so far, now at the wheel of the smart ex Steve Potts face-lift 156 with five Twin Spark Cup wins to his credit, benefitting from the calming background influence of Bianco Auto Developments. Tom started the year with the avowed intention of lifting back-to-back titles but things have not always gone to plan. Clashes with authority that resulted in dropped grid places, added to a retirement at Oulton has left him 16 points behind Andrew. Nonetheless, Tom has still taken three Twin Spark  wins in 2017 and is a driver who never gives up.

However, it could be that the opposition at Brands will pose a stronger threat than on some other circuits. Dave Messenger, for example, is a two-time Brands winner while Matt Daly, although having only his first outing since 2015 (when he won the Twin Spark Cup in the final race of the year at Donington) can be expected to be up to speed very quickly. He would love to break the 156 monopoly with his 145. 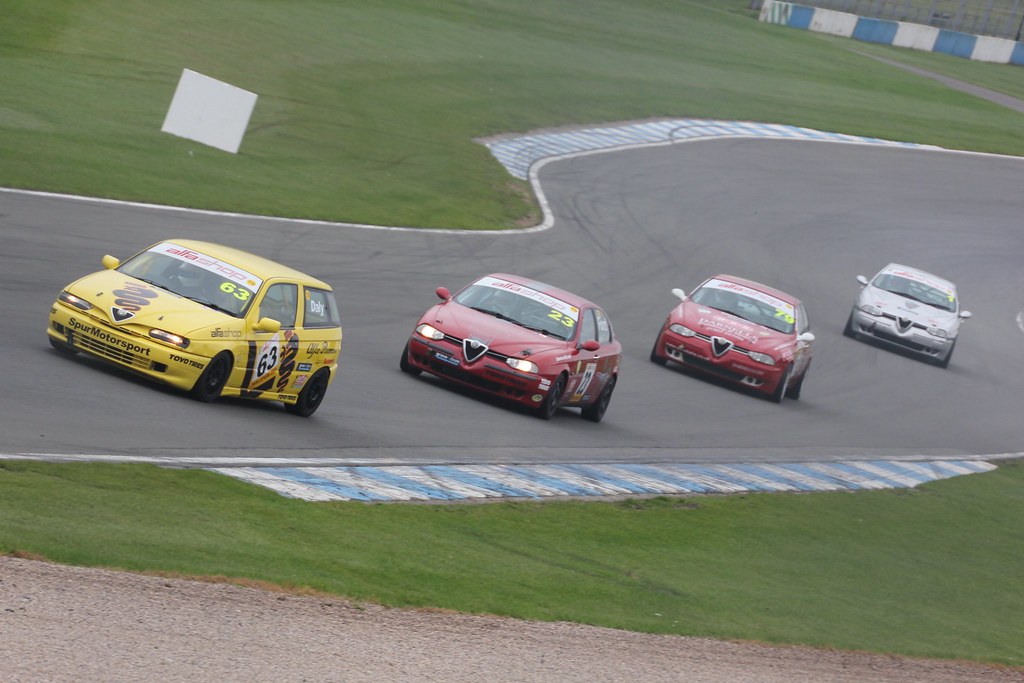 Someone who has already done it this year is James Browning who was on superb form at Silverstone in April and came very close, at Cadwell in May, chasing Andrew Bourke home twice.  Simon Cresswell, Gethin Llewellyn and Mike Tydeman could all feature strongly with Stacey Dennis able to push them hard. In mid field, it will be interesting to see how Nick Anderson fares with his easily identifiable yellow Spider, likewise Jeremy Chilton who was much more on the pace at Snetterton after his 156 had received some t.l.c from Bianco. 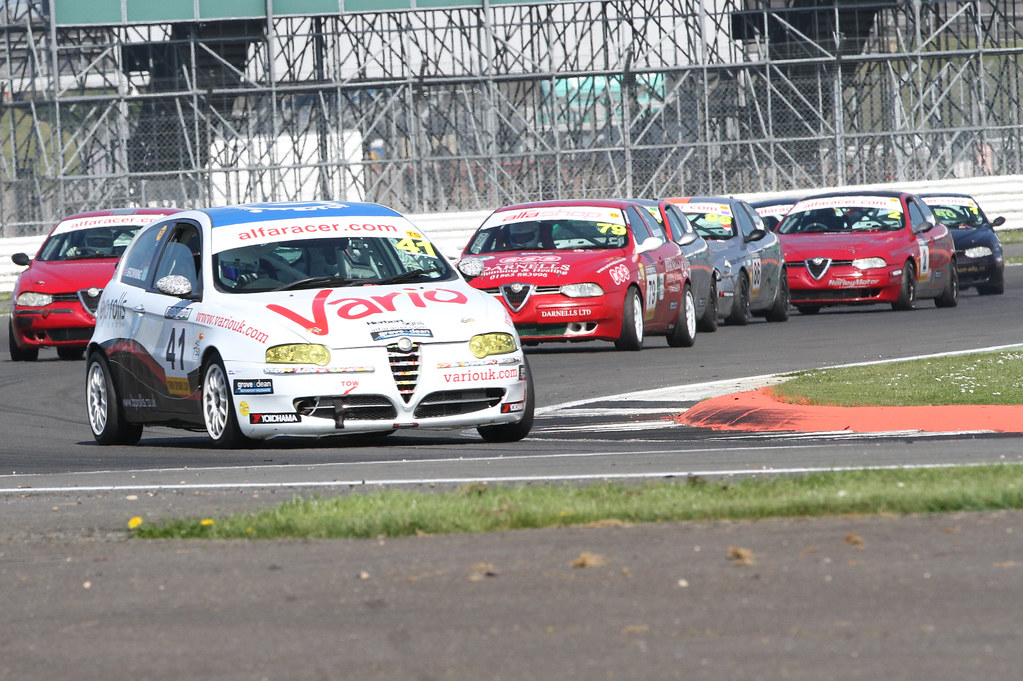 The Power Trophy class at Snetterton showed a pleasing up-turn in entries and provided win for Ron Davidson (164 3.2) and Paul Plant (156 3.0) but the star there was Paul Webster with the ex Clive Hodgkin 156 GTA who was the Grove & Dean Motorsport Insurance “Driver of the Weekend”. Sadly, Paul Webster is away on holiday but Paul Plant has put in a late entry and will certainly be a candidate for the Power Trophy class win, if not victory overall. Class points leader Ian Brookfield will be there and may be able to challenge Ron Davidson as Ron has had to fit a less powerful engine as the unit that took him to the Snetterton win in race 1 failed in race 2. 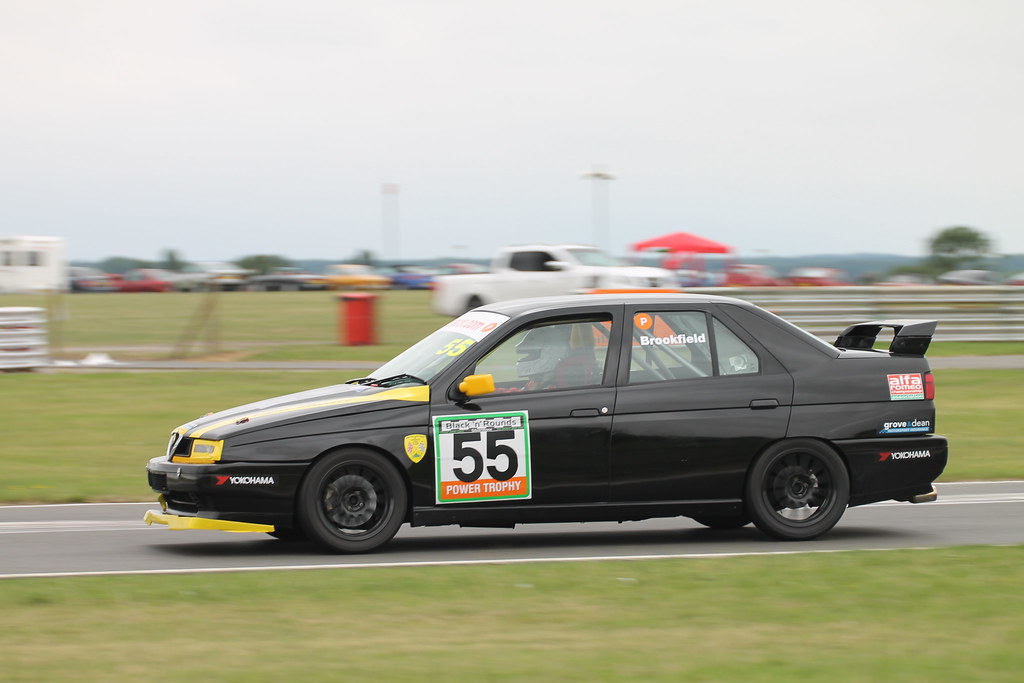 The races overall should see clearcut domination by Vincent Dubois in his 156 turbo, the 155 Q4 derived engine turning out approaching 400 bhp but reliability has not been a strong point and so we could well see the Punto Abarths of the brothers McFie at the front. Chris has already taken three overall wins this year and Simon has now replaced his HGT with an Abarth version, ex Alastair Kellett, and was on the same pace as Chris at Snetterton a month ago. Whatever, an Abarth win would no doubt please the event sponsors! A third Punto Abarth is that of Vince Proto who I recall once raced an Uno with us a few seasons  ago. 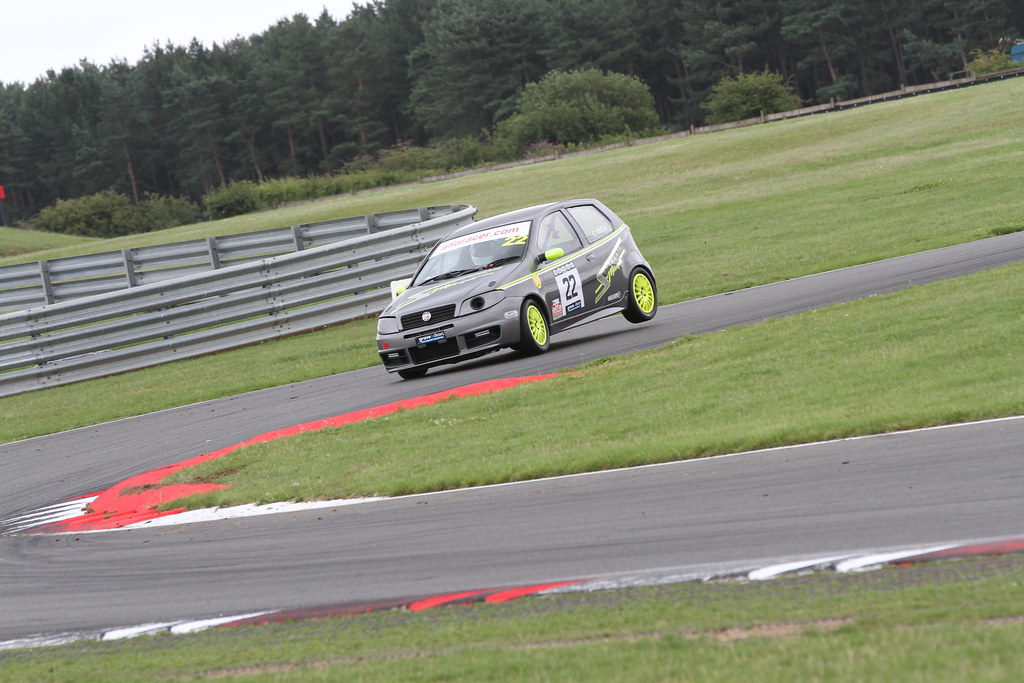 There will also be some Alfa representation in the “Italiano v inglese” races. Ian Stapleton will be racing his 3.8 litre GTV6 and will be joined by double Alfa champion Ted Pearson with his familiar metallic green Alfasud Ti. Malcom Jeffs is having an outing with the Alfasud Ti he races quite regularly elsewhere and there is also a “GTV” but whether Giulia, Alfetta or 916 series was not clear on the entry list. This will be driven by Lawrence Alexander. Otherwise the entry is mostly dominated by Ferraris of various kinds, plus Richard Thurbin’s Lancia Delta HF Integrale 16v, with three Lotuses and two Minis making up the “inglese” element. 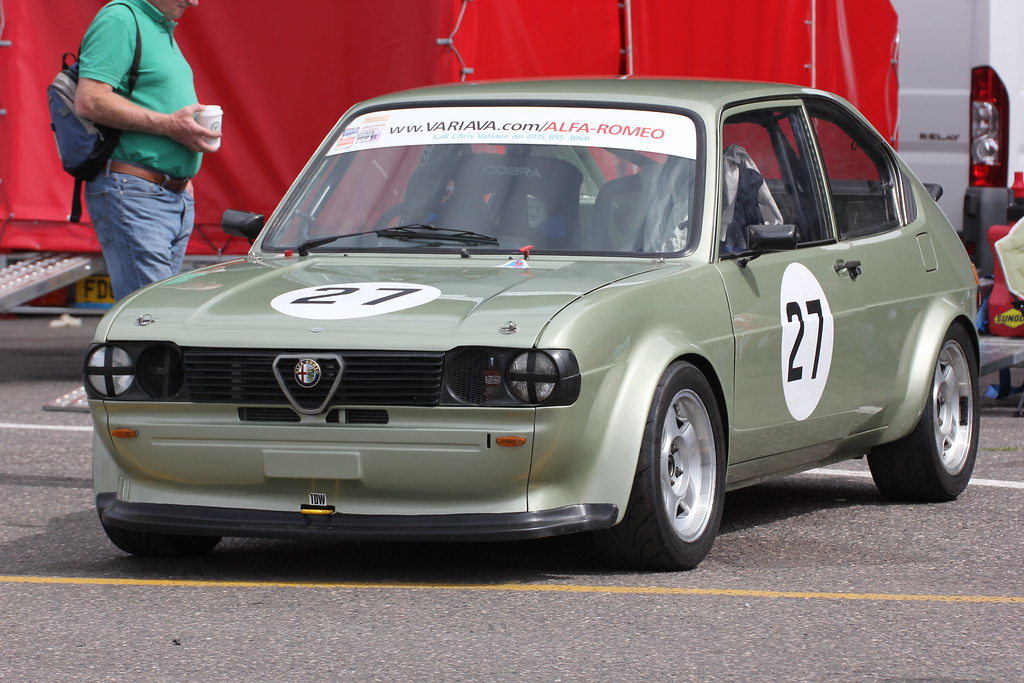 Several Ferrari races, Italian car demonstrations and laps by Italian racing bikes make up the programme. There will be displays by various owners clubs, including the usual strong AROC contingent and I expect that local Alfa dealers will be making their contribution. 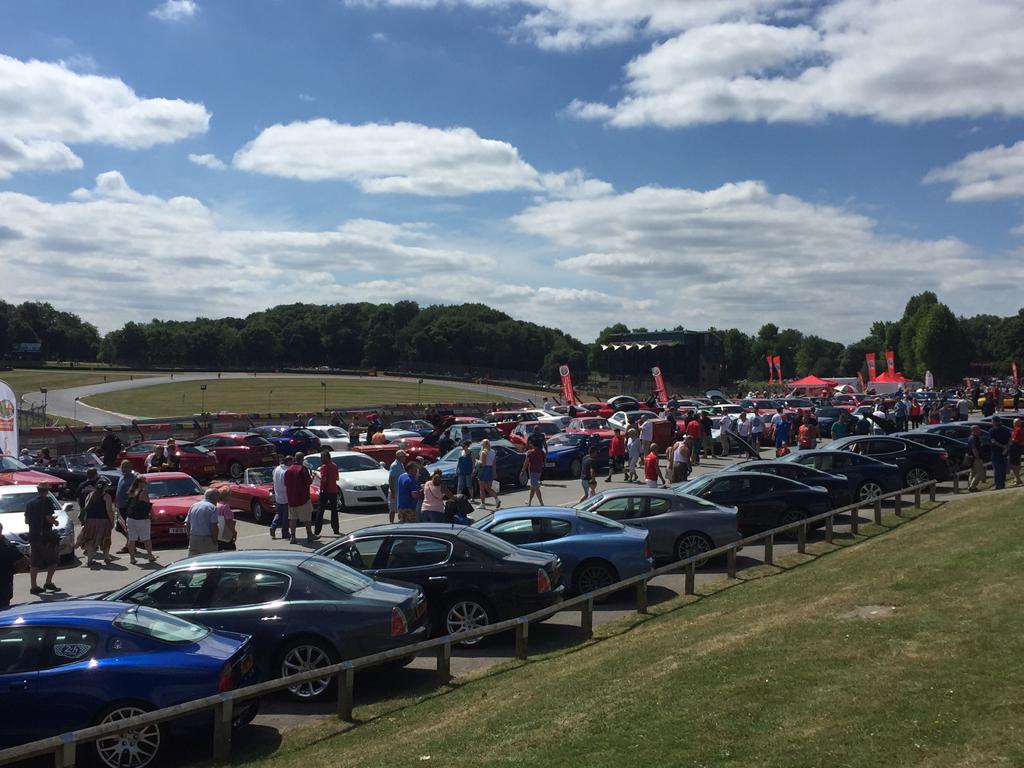 We can be found in the Lower Paddock and look forward to seeing many old friends and past competitors as we did last year. Andy Robinson will again be taking on the role of on-the-day co-ordinator and it will be good to see our old friend (ex Championship eligibility scrutineer) John Monk as Chief Scrutineer. At the time of writing, I am looking out a heavy rain and grey skies but the forecast for the weekend looks better, so we are keeping our fingers crossed for a dry Sunday. See you there.