This will be the first time that the BRSCC Alfa Romeo Championship has visited Croft since September 2005, the year before Alfashop became our title sponsor, starting a very successful partnership which is now in its tenth year.

On that occasion we were the guests of the Classic Sports Car Club and looking back, there are only three drivers entered this coming weekend who raced there in 2005. Bryan Shrubb, Keith Waite and Andy Inman. Reading my report of the meeting recalls “qualifying on a wet and miserable morning” when Bryan astounded everyone by taking pole no less than 8.7” quicker than second placed Nik Mantikas and his class F 33! However, the track was mostly dry for the first race and produced a win for Tim Lewis’s Alfasud Sprint ahead of Bryan, with Keith Waite a splendid 3rd in his 75 3 litre after Anthony George had retired his championship winning 33. Race 2 was disrupted by accidents, mechanical problems and a red flag but after the re-start produced an unexpected but popular win for Keith from Lee Penn’s 33 16v.

Need to learn the circuit?

The BRSCC have returned to organising their own race meetings at Croft and we made a determined, and successful, effort to get a place on the 2015 programme there. The circuit is just over 2 miles in length but manages to incorporate a number of challenging corners even if it doesn’t have any elevation changes. If you take a look at a Youtube lap of the track, it is clear that a map doesn’t really give you a true idea of what is involved with the approach to Tower, the Jim Clark Esses, Sunny In and the approach to the Complex all requiring particular attention. I am glad to say, though, that most of the hefty tyres that marked the Clearvaux/Hawthorn combination of corners have gone in favour of plastic markers and a gravel trap, although tyres do remain on the inside of Hawthorn. 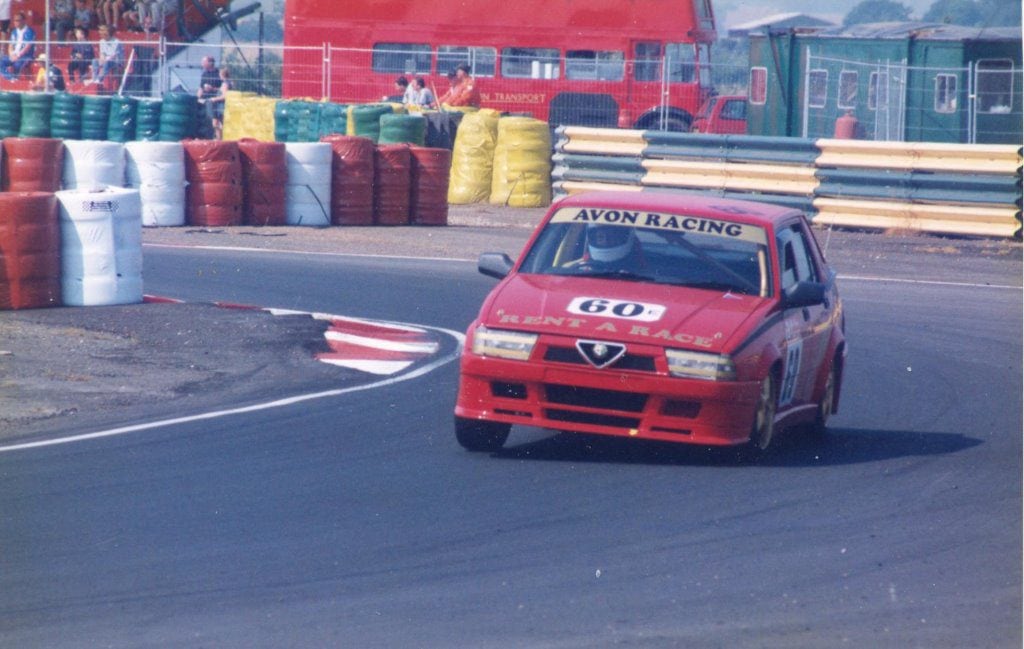 It looks as though we are back to having a better Modified entry after only two modified cars appeared at Brands. Unfortunately missing, however, is Roger Evans who will not be back from holiday in time but he will undoubtedly be there in spirit as Graham Seager tries to increase his narrow overall points lead over James Bishop. Also missing are Vincent Dubois and Barry McMahon who had entered originally but have now withdrawn. Roger McMahon, however, will be there with the 147 GTA Cup car that went so well at Cadwell before overheating in race 1 and then having a tyre problem in race two. We shall also be welcoming back James Nicholls in the 147 he raced at Oulton in May before the Integrale/Q4 engine decided to explode. Since then a completely new unit has been built up and James will be hoping that this will give him an opportunity to get some decent mileage if not a podium result. Andy Robinson had a major boost at Cadwell as far as lap times were concerned and was able to take advantage of other people’s woes to get on the podium in race 2. Andy hasn’t been to Croft before but he will be a contender nonetheless. I suppose that Graham Seager goes to Croft as the favourite for at least one race win but Bryan Shrubb has been having an excellent season so far and should be able to make him work hard to stay ahead. Final Modified entry is Chris Oxborough who, although he was not at Croft in 2005, did race at the circuit three years earlier. His 75 now has a supercharged 3 litre engine which has given him some good results but this will be the first time we have seen him since 2013. 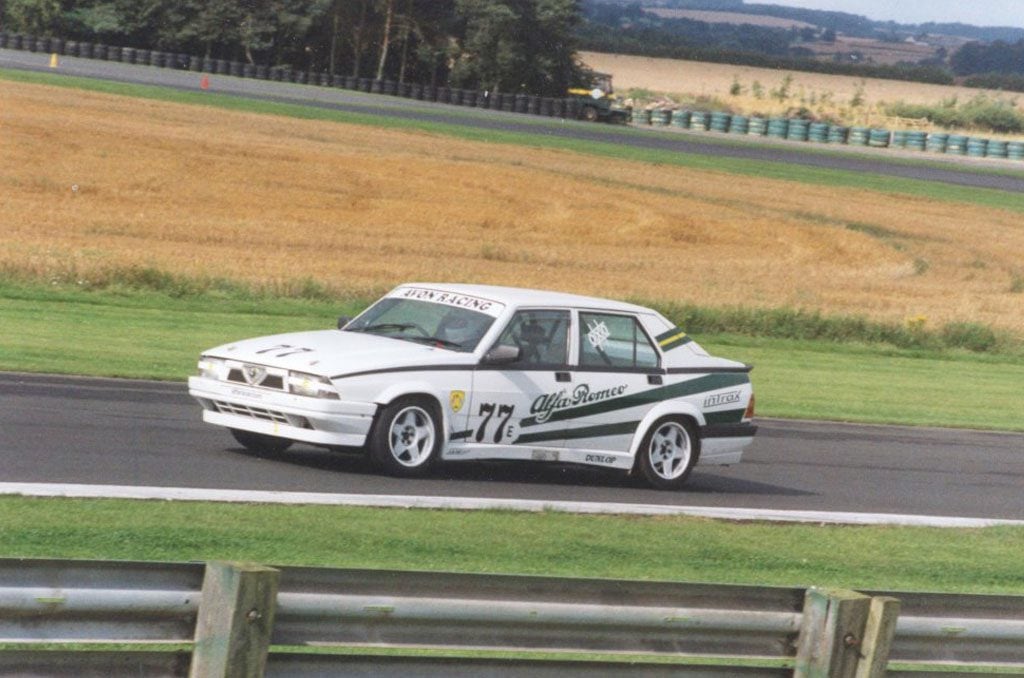 Keith Waite is back again in the Power Trophy. His 75 3 litre sustained frontal damage at Brands but hopefully all will fixed for the coming weekend. Class points leader Ray Foley will not be there after an accident at Assen but Clive Hodgkin has entered his 156 GTA for its first outing of the year and we are keeping our fingers crossed that he will be fit enough to drive. From his races with the 156 last year, we know that Clive has a quick car that is capable of an overall podium and he knows Croft well.

And so to the Twin Spark Cup which will have a great deal of our attention again. 2015 winners Paul Plant, James Bishop and Tom Hill will be in action but missing is the only other driver to have had race wins, James Ford. A lot will depend on qualifying. James Bishop was only third on the grid at Brands and then found himself stuck behind the impressive Simon Cresswell for most of the race after a Safety Car. As a result he had to be content with a third place finish behind Tom Hill – taking his long awaited first win and a dominant one at that! – and Simon. But it could have been worse than as Dave Messenger and Steve Potts were ahead of both Simon and James when they made contact at Clearways, ruining both their races. I think we can expect both Dave and Steve to be well in the hunt again at Croft and obviously Paul Plant is always a potential TS winner. Andy Hancock missed Brands but is looking forward to getting out again with the white and blue Grove & Dean 156 and also 156 mounted will be Andy Inman at his “home” track and Jeremy Chilton. Stacey Dennis (147) will be back for her first run since Snetterton and is optimistic that her clutch problems have been sorted while Richard Stevens will be trying to frighten the 156s again with his rapid 145. Last week we had an additional entry from Mick Donaghue in a 156. Mick did two races with us in 2010 and 2011, at Silverstone and Oulton, with Phil Donaghy’s 145 but, at the time of writing, I am waiting for some information from Mick about the 156 he is using. 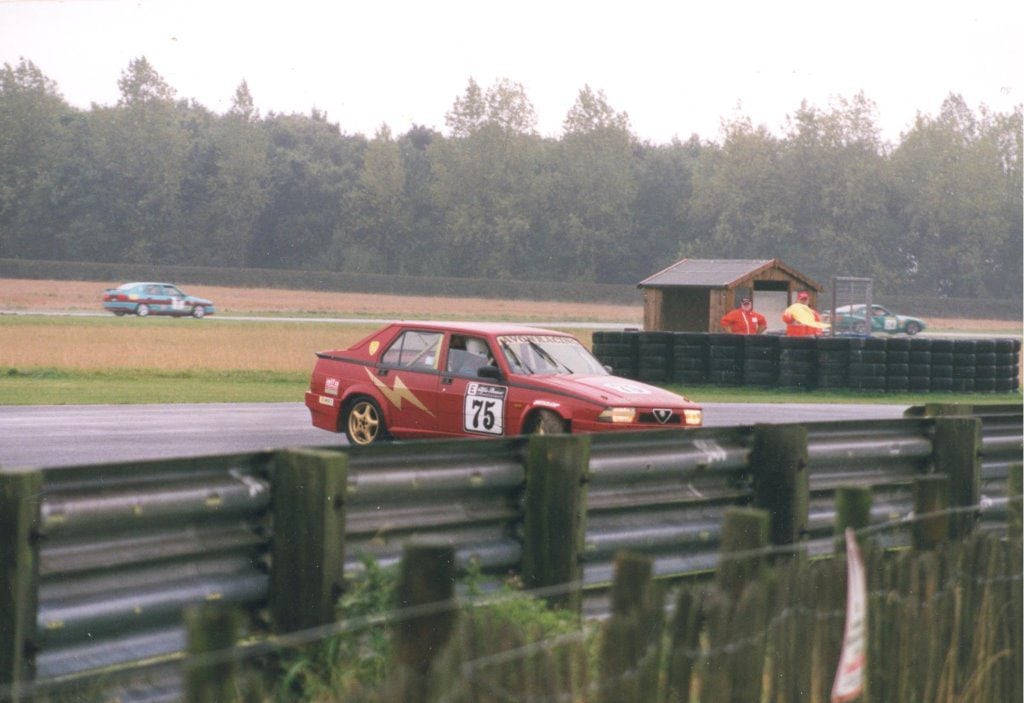 The quickish left hander before the Complex has caught out many drivers, particularly in the wet.

Just a few words about the history of Croft. Like so many other UK circuits, past and present, it started life as a World War Two bomber base, with aircraft such as the Lancaster, Wellington and Halifax leaving on night raids over Germany. During the late 1940s and into the 1950s it was used for race meetings that mixed various combinations of the perimeter roads, including the area where the paddock is now. In 1962 it changed hands and two years later re-opened for racing (I recall going their during an Avon/Motor Tour of Britain) but in 1981 closed for circuit racing and switched to rally-cross with the Darlington & District Motor Club as the organisers. It was in 1997, however, that everything changed with a major transformation of the circuit into the format we see now. Touring cars, Superbikes, British F3 have all appeared in front of big crowds and, interestingly, it is current Force India driver Sergio Perez with a Dallara who holds the lap record in 1’13.656” (as against our lap record of 1’34.77” held by Tim Lewis in his Alfasud Sprint while the fastest BTCC lap back in June was 1’24.590” by Sam Tordoff’s BMW) ) Noise issues and court cases blighted the circuit soon after the BARC took over the lease but a settlement was reached in 2009 which allowed just 40 “noise days” a year. This at least ensured that a number of major championships could continue to use the circuit and that there would also be space on the calendar for some more club racing based meetings of which next weekend’s is one. 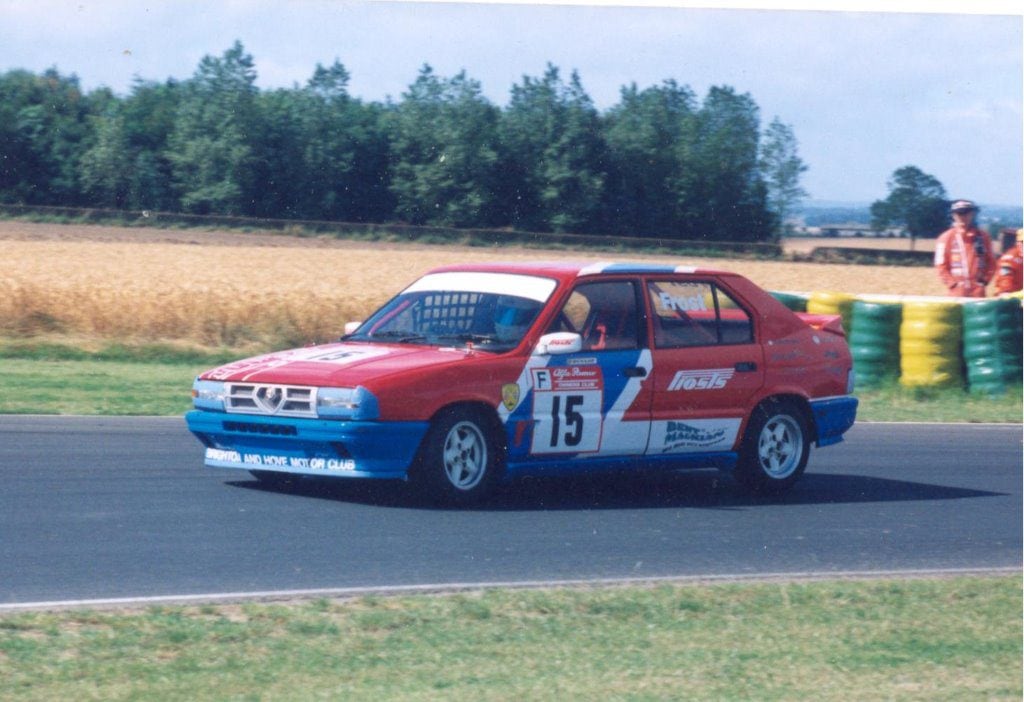 Highly competitive Class F racing was always a feature of our previous Croft visits, all before Twin Spark spec cars appeared. Here is Simon Frost’s 33 in 1998.

Finally, the Championship Panel wishes to remind competitors that the MSA operates a strong alcohol and anti-doping policy (Blue Book D.25.1.4 and G.15.1.4). We haven’t seen any breathalysers being proffered by “men in grey suits” but it will surely happen at some point. Also on the question of Driving Standards – should any driver be given points on their licence by the Clerk of the Course, it will incur a grid place drop at the next race which is double the number of points incurred. Also don’t forget that exceeding track limits which can also bring penalties on the day.

With that out of the way – we look forward to an excellent couple of days racing! The timetable can found here and the Final Instructions show that signing-on and scrutineering can be done on Friday evening between 4.00 p.m. and 6.00 p.m.