First of all, apologies that this report is rather late. Just before Easter my computer refused to boot up and after the holiday it had to go away for some remedial work. Happily computer “hospital” quickly sorted out the problem and  with new software installed the it is now better than it has ever been.

So, on to the burgeoning Classic Alfa Challenge. The success of the HRDC Classic race at Donington last October, despite the rain and the shortened track time, encouraged Julius Thurgood to push ahead with his project to run three races in 2019. His previous deal with the BRSCC has been altered by placing all his races on other programmes that he feels are more in keeping with historic racing. The first of these was to be at Silverstone on April 14th as part of a large Vintage Sports Car Club (VSCC) meeting on the National Circuit.  The rest of the programme would feature races for cars from the Historic Grand Prix Cars Association, original Formula 3 with Cooper-Nortons, Kiefts, Arnotts etc, Morgans and a wonderful collection of vintage forty Bentleys which had been permitted an old style Le Mans start for their 45 minute race. All this meant that there was going to plenty to keep us interested and although the Alfa qualifying and race were not to be until the Sunday, there were plenty who arrived early to keep an eye on what was happening.  It is a long time since I last attended a VSCC event (back in the 50s) but the atmosphere is completely different from one our usual Mazda or Caterham dominated meetings. For one thing, you have a big contrast in the size of the cars – a 4.5 litre Bentley dwarfs an F3 Kieft-JAP as an example. There were several stalls in the paddock with books, models, photographs and posters plus vintage parts and, if you needed it,  even massage caravan!!

Once again, Julius had gathered an excellent entry, the cars being split into three classes – Corsa, Monza and Nord – headed by Donington winner Chris Snowdon in Richard Melvin’s Alfetta GTV which had benefitted from an engine rebuild during the winter and was sporting some new Yokohama A052 tyres that Chris was trying for the first time. Also in the Corsa class were Richard Drake in his Napolina liveried Alfasud Ti, John Symes’ GTAm replica and the Alfasud Sprint 1.7 of Richard Ibrahim. Spread over the other two classes, there was a host of Giulia coupes of various origins – GT Juniors with 2 litre engines, proper 2 litre cars, GTA and 1600 Sprints – and it was going to be interesting to see how they would match up to the Alfettas and Suds on a dry track. Peter Smart and Ian Brookfield could make a direct comparison as they were looking after both,  two 2000 GTVs to be driven by Mike Neumann and Ken Rorrison and an Alfetta in the hands of Lawrence Alexander. Mike Neumann’s car was that driven by Peter in the Alfa Championship (it was green then) back in the late 90s while Lawrence’s red and white colour scheme was honouring renowned French Alfa racer, Dany Snobeck.  Alex Jupe had entered his own Marlboro liveried Alfetta and had also prepared an ex South African car for Jonathan Horsfield. I discovered that Jonathan had also driven in the Alfa Championship, with a Sud, between 1988 and 1990. “Best result was a 6th in class F”. Other familiar Alfetta GTVs were those of Richard Leggett and the Napolina liveried car owned by Stephen Chase which, on this occasion was to be driven by his son Henry. Richard has owned his car since the late 80s and has raced and rallied it regularly over the years. Although it doesn’t quite fit into the Challenge criteria, James Wright was out again in his beautifully prepared 75 Twin Spark while Louis Frankel was at the wheel of the 116 series Giulietta looked after by Richard Drake. Another one-off car was the 2000 Berlina of Miguel do Valle which Jon Dooley had tested at some point and pronounced generally well set-up. Anticpated front runner was  the 2 litre engined Nord class GT Junior of Richard Merrill.

Cars in the Monza class that were expected to go well were the GTAs of Bernard Hartogs and Neil Merry plus the familiar 1600 engined Giulietta Ti of Gavin Watson and the 2 lite Sprint GT of David Alexander. The original Giulia saloons are always amongst my favourite cars (my first Alfa was a 1600 Giulia Ti in 1966) and it was good to have two Giulia Ti Supers, for Frank Slevin and Ben Cater, in the entry plus James Gibbons’ 1600 Ti.

If you are at a VSCC meeting, you don’t have “qualifying” it is still, as it always used to be – “practice”, but the times all count for the grid nonetheless! Sunday morning at Silverstone was extremely cold and Diana encountered one poor chap who emerged from his van complaining that his windscreen was frozen – inside! – and his gas had run out. It was minus 4 degrees in the night we were told. However, things were a little (not a lot!) better when the 15 minute practice session got underway at 10.13 and once there was some heat in the tyres, the times indicated very close battle at the front between Chris Snowdon and his pursuers which ended up being led by David Alexander and Neil Merry whose Giulia coupes ended within 0.38” of the Alfetta, Chris’s best being 1’12.49”. An excellent fourth fastest was Mike Neumann with a 1’13.56”, ahead of James Wright, Bernard Hartogs, Richard Ibrahim, Alex Jupe and Jonathan Horsfield.  Completing the top 10 was Ben Cater in his Giulia Ti Super but the team were worried about some unusual “growly” noises coming from within the engine that they could not diagnose. John Symes was unhappy about the “feel” of the new brake pads on his GTAm Replica  and had to be content with a time only good enough for the 8th row. It was entertaining to see close groups of negotiating the Luffield Complex and Woodcote, these including the Sud Ti of Richard Drake. But where was he on the timing screen? Asking afterwards, he admitted that he had forgotten to switch on his transponder but the clerk of the course was kind and allowed him to start in his correct position – fourth quickest, on the second row, with a 1’13.46”. A full list of times can be found by logging in to “VSCC Silverstone 2019 Results”  – HS Sports Timing looking after things here rather than TSL. A visit to the garages found Chris Snowdon underneath the Alfetta trying to remedy a clutch actuation problem that had left him gearless. Happily all was sorted well in time for the expected 2.45 race start. Another quick car to be ready for the race was Richard Merrell’s 2 litre GT Junior which had missed practice and would line up at the back of the grid. 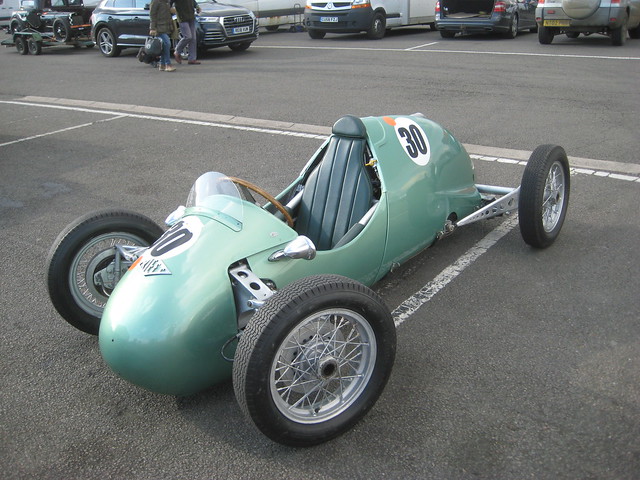 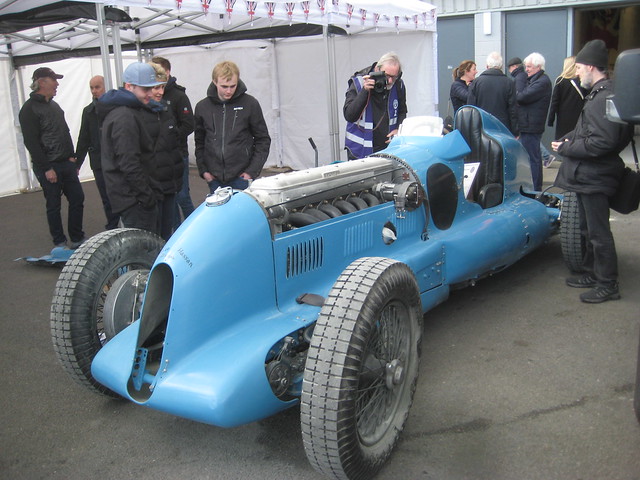 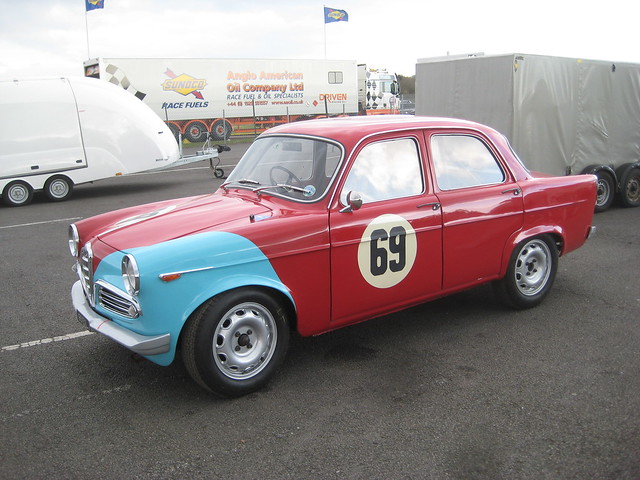 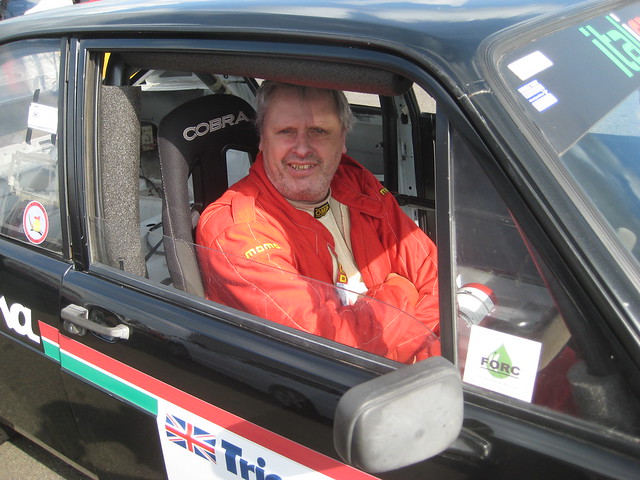 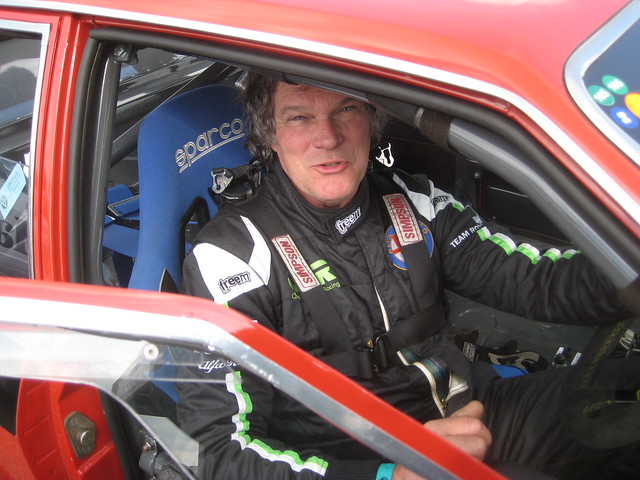 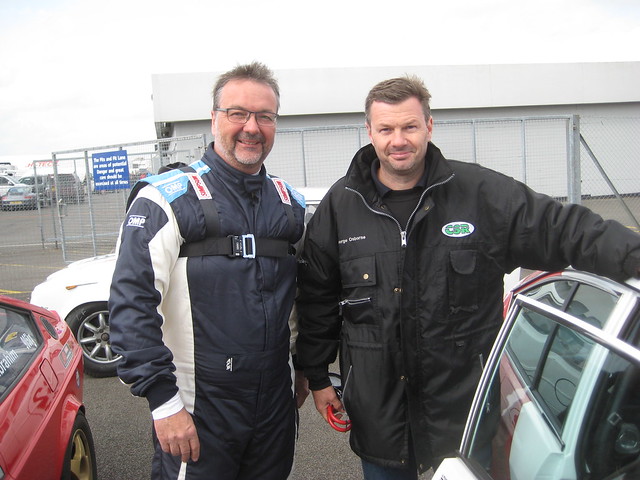 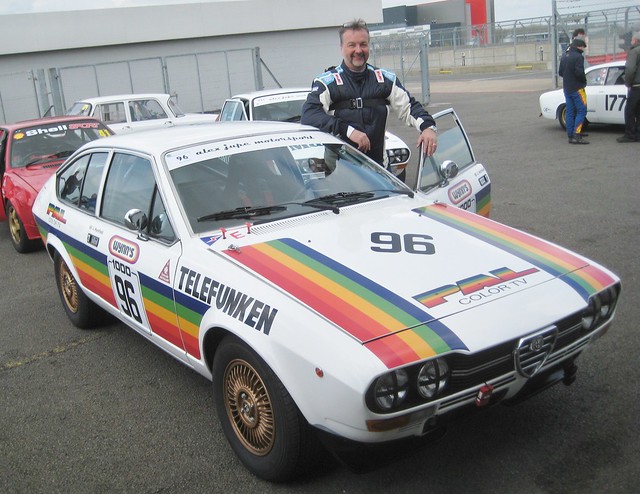 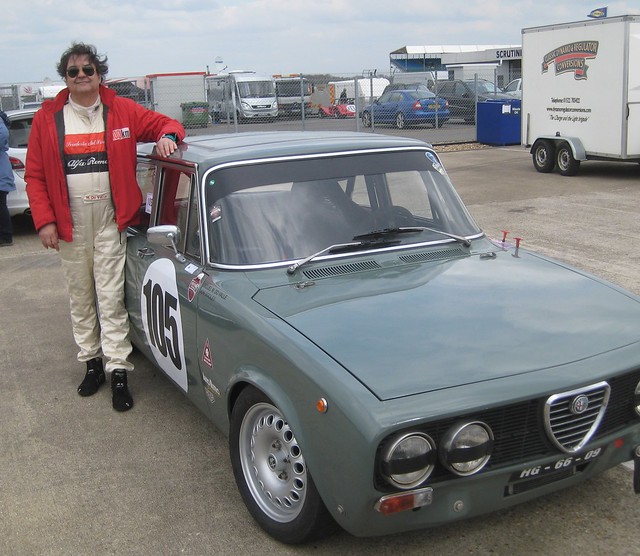 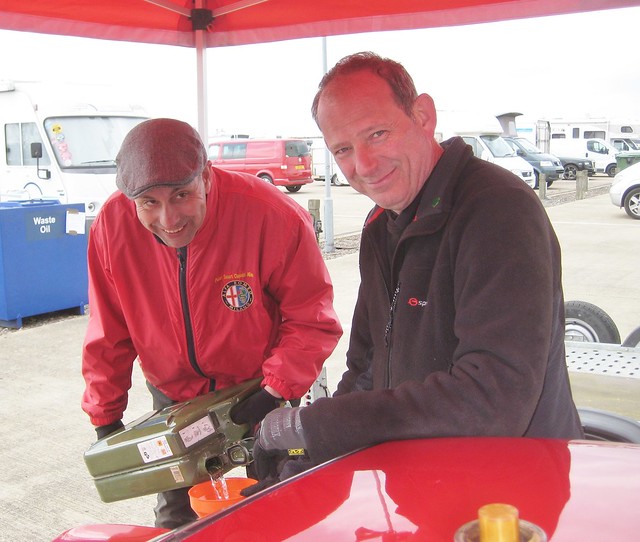 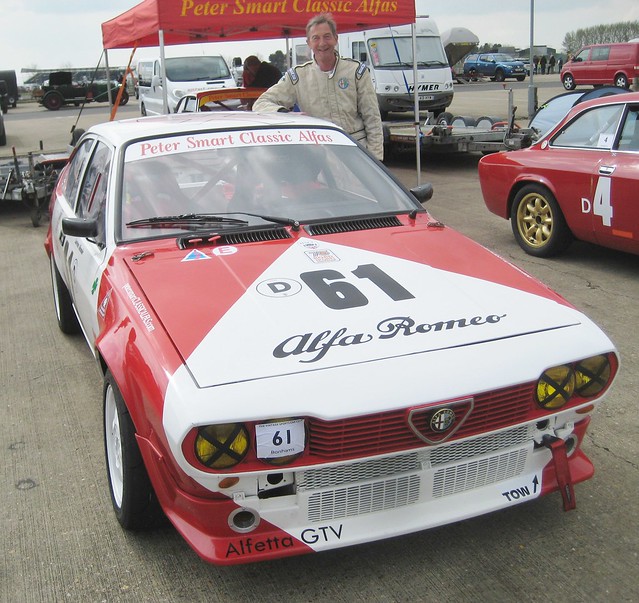 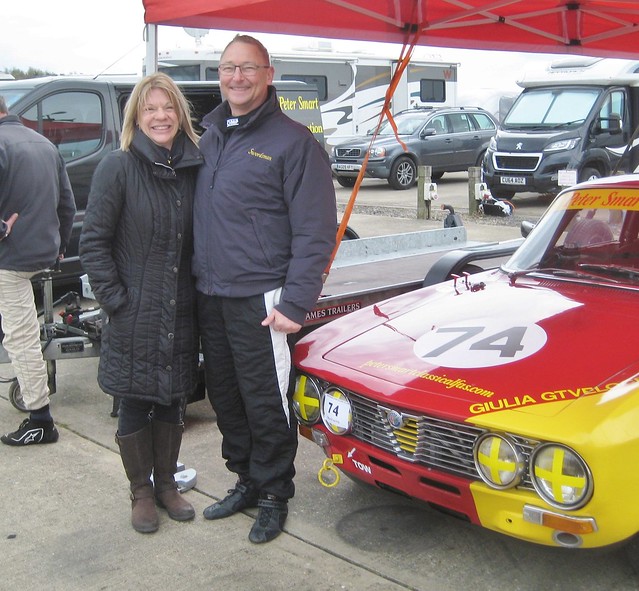 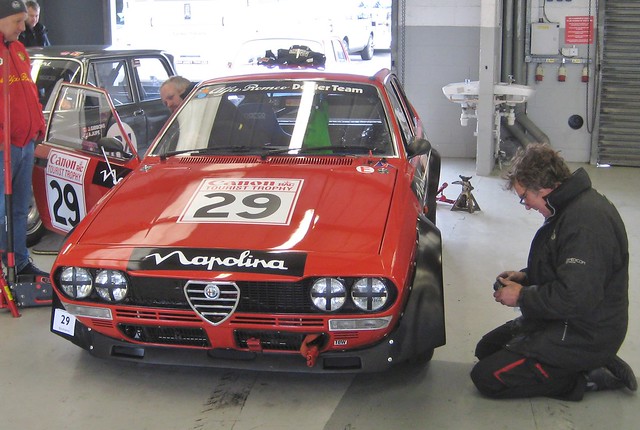 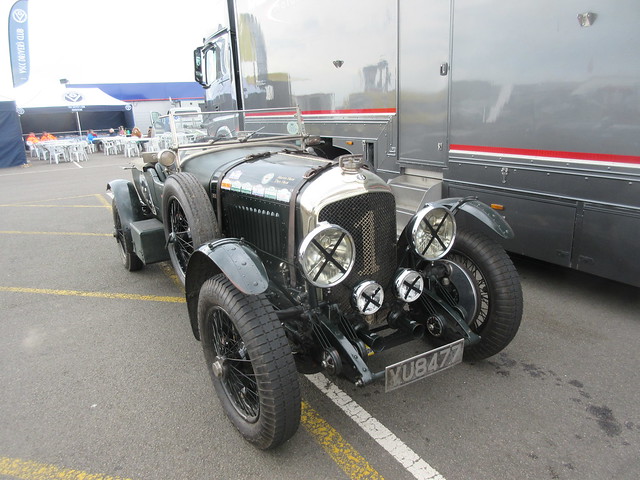 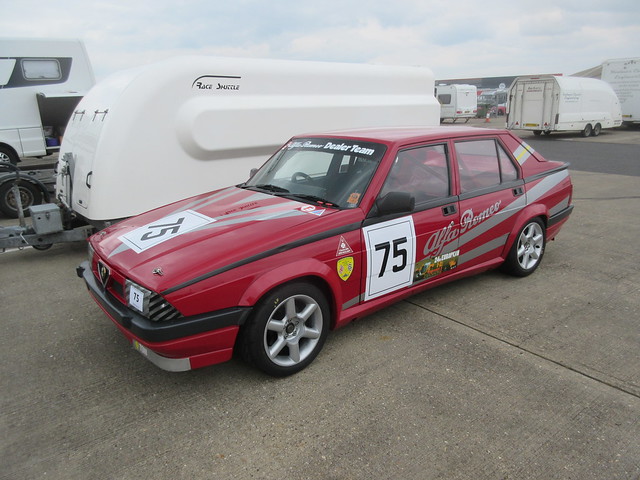 Away from the start Chris Snowdon and David Alexander were evenly matched on the run to Copse but David had the inside line (pole was on the outside here) and just edged in front of Chris through the corner as Richard Drake burst into third ahead of Mike Neumann with whom he would battle for much of the race. Chris and David had taken different lines through Maggotts and into Becketts where David locked up but maintained a marginal lead which he quickly lost to Chris down the Wellington Straight. All a bit fraught! Under 2 seconds covered the top 4 at the end of the first lap with Neil Merry, James Wright and a fast starting John Symes next in line. Making great progress, however, was Richard Merrell who rapidly worked his way through the slower cars spread across the track and by the end of the lap was already on the tail of  Jonathan Horsfield’s Alfetta, running 15th and quickly gaining on Bernard Hartog’s GTA.

The battles between Chris Snowdon and David Alexander and Richard Drake and Mike Neumann carried on throughout lap 2, and it wasn’t until lap 3 that Chris managed to edge the Alfetta slightly clear (not by much!) of the 2 litre Sprint GT while Neil Merry had put on a spurt and passed both Richard Drake and Mike Neumann. Ben Cater’s Giulia Ti Super expired in a cloud of smoke  at Copse, confirming his team’s worries after practice. Richard Merrell’s progress continued to be spectacular, passing the timing line in 7th place after 4 laps with James Wright’s 75 now in his sights. With tyres up to temperature, Chris Snowdon now started to pull away from David Alexander. Neil Merry pulled off while, by the end of lap 7, Richard Merrell had closed in on Drake and Neumann, passing them on lap 8 and temporarily allowing the Sud to get away from his pursuer. Chris Snowdon was going quicker than ever at this stage, setting his fastest lap (1’11.93”) on lap 9 – a time that nobody else could get near although Richard Merrell was to manage a best of 1’12.22” later in the race. By the end of lap 10, Chris was running a comfortable 6.7” clear of David Alexander  with Richard Merrell now third, a further 6” back, and gaining. Richard Drake, Mike Neumann, James Wright and Alex Jupe were next in line but there were some great battles going on further down the field, notable being that between Gavin Watson (Giulietta Ti) and Lawrence Alexander (Alfetta GTV). Alex Jupe’s Alfetta, running a strong 7th at this stage was starting to smoke  but with guages showing nothing alarming, Alex decided to carry on. It transpired that the dipstick had not been pushed home and oil was escaping into the engine compartment.

By the end of lap 14 it was clear that Richard Merrell would soon take over second place from David Alexander which he did a lap later when the latter ran wide at Brooklands. Despite his progress in terms of positions, Richard had not actually closed the time gap to Chris which had been 10” on lap 2 and was 12” on lap 15. Mike Neumann had been receiving the black and orange flag for dropping fluid and pulled into the pits on lap 17 where Ian Brookfield and Peter Smart detected, of all things, a split fuel filler cap rubber seal that was allowing petrol to escape. A sad end to a fine drive. Another to be unlucky was Richard Drake, who missed a gear while in close company with James Wright and had to retire on lap 21 with a damaged engine.

After such a successful second Classic Alfa Challenge, Julius Thurgood is looking forward to the rest of his Alfa programme. The next race should have been at Thruxton on June 2nd but it would appear that the HRDC is going to run its own race meeting at Lydden Hill on May 27th and that this will include an Alfa race. The Thruxton race will go ahead as planned but we hope that the Lydden event, just a week earlier, will not impact too much on the entry.

My thanks to Mike and Tina Neumann, and Richard Merrill, for their in-car videos on YouTube which helped enormously in writing the race report