You only have to look at the 29 car entry list (split into four classes) to see what a fascinating race Julius Thurgood and his Historic Racing Drivers Club have put together for next Sunday’s 30 minute Classic Alfa race at Donington. 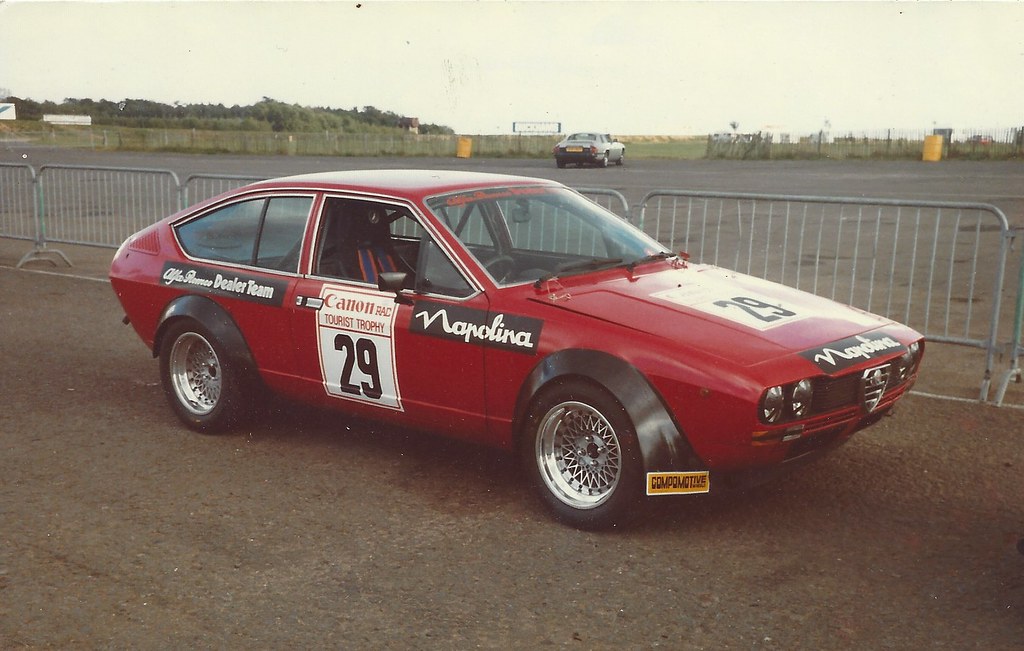 To begin with, there are plenty of old friends from the Alfa Romeo Championship, going back to the very beginning, and including two double champions, Ted Pearson (1991 and 1992) and Chris Snowdon (1994 and 1995).  Chris is driving the Alfetta GTV owned by Richard Melvin that was built up originally by Peter Hilliard to compete in the 1981 RAC Tourist Trophy at Silverstone in company with the much missed Leo Bertorelli. Ted will be at the wheel of his latest acquisition, a Trofeo Sud Ti 1300, the preparation of which has been in the hands of Tom Shrubb. The earliest Alfa Championship driver taking part is Micky Bolton who enjoyed two handicap race wins in 1983. He has built a car specially for the event, having acquired a shell from Holland, and will be using the number 188 as he did for many years until his last Alfa Championship race in 1997.

Going down the list – John Symes, who won the second Classic Alfa race in 1992 (also at Donington) is entered with a GTAm with Harry White from Bianco in support. The specification of this car is a bit of a mystery, so we shall have to wait until Sunday to check it out. Steve Potts, who raced a 156 with us, after time with a Porsche 924, is now enjoying life with a Giulia Super which is entered in the “Monza” class which encompasses production Giulia 105s, 101 Giuliettas and anything earlier. Gavin Watson has his usual Giulietta (EXL 69) which has a long history in Alfa racing while Gavin successfully raced a GTV6 himself with us between 1994 and 1996. Also in the “Monza” class is Max Haycocks who, apart from being an Alfasud enthusiast and past racer with one in the 90s, also has a Sprint GT and it is this car that he will have at Donington. Alex Jupe has entered an Alfetta GTV – a little different from the A35 he has been racing of late. Alex, of course, has established a reputation as an Alfetta and GTV6 specialist. A couple of interesting cars in the class are the 2600 Sprint of Jonathan Miles and the 1900C SS of Matthew Holme. The latter is probably  the bravest entry given the probable value of the car! 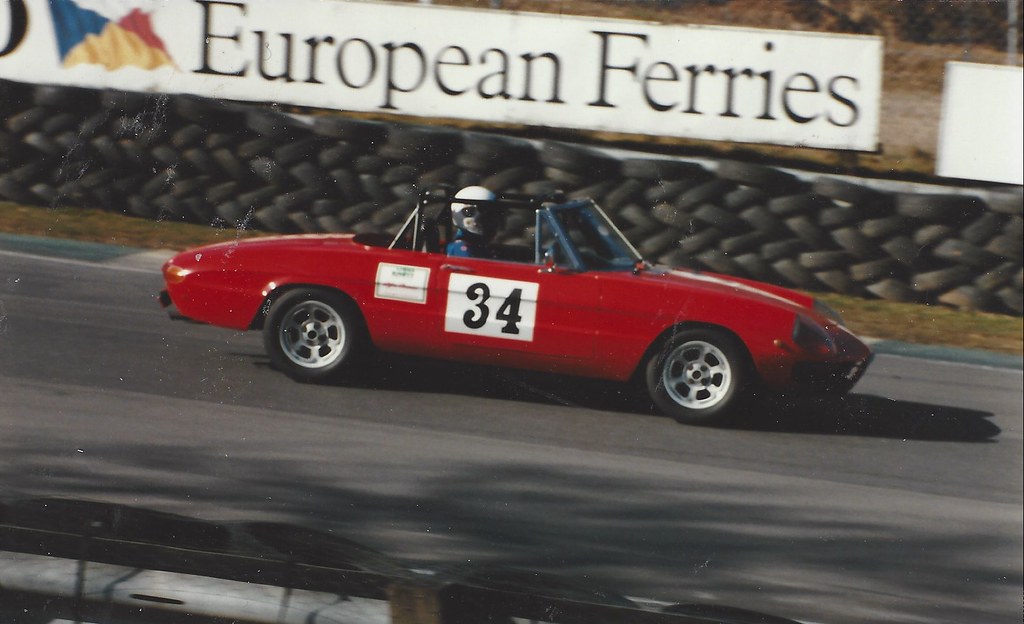 The “Nord” class is for production Alfettas, 116 Giuliettas and over 1600 Giulias but a 75 Twin Spark also seems to have slipped in, this being entered by James Wright. Stephen Chase who raced Alfettas and then a 75 3 litre with us before switching to Historic Racing is in an Alfetta GTV.  The car he will be racing at Donington is in Napolina Alfa Dealer Team colours which Stephen built up around 1992 as a replice of the car raced in Prodsaloons in 1980 by Rob Kirby. We didn’t have many 105 Spiders racing in the Alfa Championship, but one of them has been entered by Antony Ross who raced it with us briefly in 1995. Not quite so rare has been the 116 Giulietta and race organiser Julius Thurgood is on the entry with his. One of my favourite racing saloons (and as a road car) was the 2000 Berlina and I am interested to see a 1972 example on the entry list for Miguel Do Valle. I always recall how well Chris Taylor used to go with his earlier 2 litre engined 1750 Berlina, particularly in the wet, so the Do Valle car could be a bit of a dark horse for Sunday’s race. 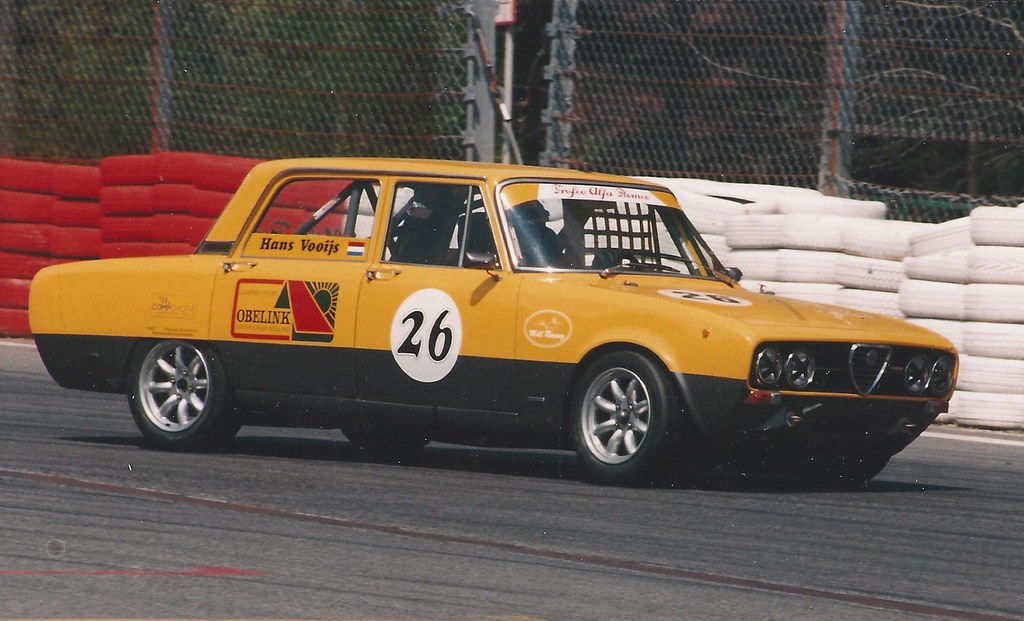 The last of the four classes is for Alfasuds and the four cars entered are all to different specifications and with varied histories. I have already mentioned Ted Pearson but we also have Chris Whelan with the 1981 ex Jon Dooley Tricentrol Saloon Car Championship class winning Napolina Alfa Romeo Dealer Team 1.3 Ti. Richard Drake’s 1600 version, also in Napolina livery, has the potential to be near the front of the field but a bit of unknown quantity is the 1700 Alfasud Sprint of Richard Ibrahim. The last time I watched Richard was in a Sud Ti in 2006, so we shall see what he can do with the Sprint. 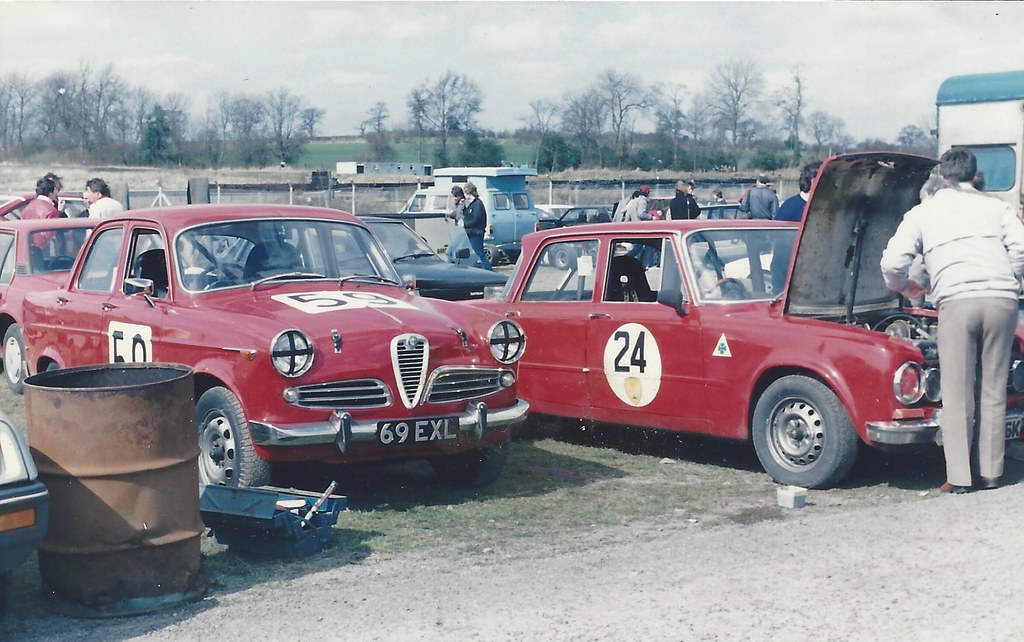 So, who is going to emerge as the race winner? Well, I suppose that on paper Richard Frankel’s GTAm should be a strong contender. But then never discount Chris Snowdon in whatever he is in, nor the Sud group with Ted Pearson and Richard Drake leading the way. Among the “Nord” class cars, Jonathan Wright’s 75 Twin Spark should be quick and Stephen Chase knows his Alfetta GTV well and has had several successes with it over the years. The weather could always play a part and Chris Snowdon expressed the hope that it would be wet as he has some new tyres!

The race is billed to start at 3.15 on Sunday afternoon (with 15 minutes qualifying at 10.00) and it should offer 30 minutes pure enjoyment for Alfa enthusiasts and our thanks should go the HRDC and Julius for making it all possible and to the BRSCC for finding a slot in their busy programme.