Castle Combe used to be a regular part of the Alfa Romeo Championship but this weekend will see our first visit there since 2012.

It is sad that the support we had hoped to gather has not been forthcoming and, as a result, it looks as though we shall have a meagre thirteen cars taking part. Nine of these will be in the Twin Spark Cup. However, we need to understand the reasons for this low turnout and to see if there anything we can do to address the situation in the future. Three drivers will be making their first appearance of the season and it will be very good to see them. Bryan Shrubb joins Andy Robinson’ s 156 in the Modified class with his 33 16v while Keith Waite (75 3 litre) and John Griffiths (147) will be contesting the Power Trophy. Bryan’s car has undergone a tyre switch, from radial to crossply, over the winter with necessary suspension tweaks to complement the change. The car was already pretty quick and it will be interesting to see if new tyres, light weight and nimble handling will allow it to stay ahead of Andy’s powerful 3.8 156. John Griffiths raced at Combe with his modified 156 in 2012 but you have to go back to 2007 to find Keith Waite on the entry list when he finished a fine 7 th overall in a large field with a best lap in 1’22.060”. With the current grid split and delayed start for the Twin Spark Cup, that should be quick enough to keep him ahead of what will no doubt be another tight scrap between the championship leading cars behind. John’s 147 may find that more problematical as it is basically still to TSC spec. 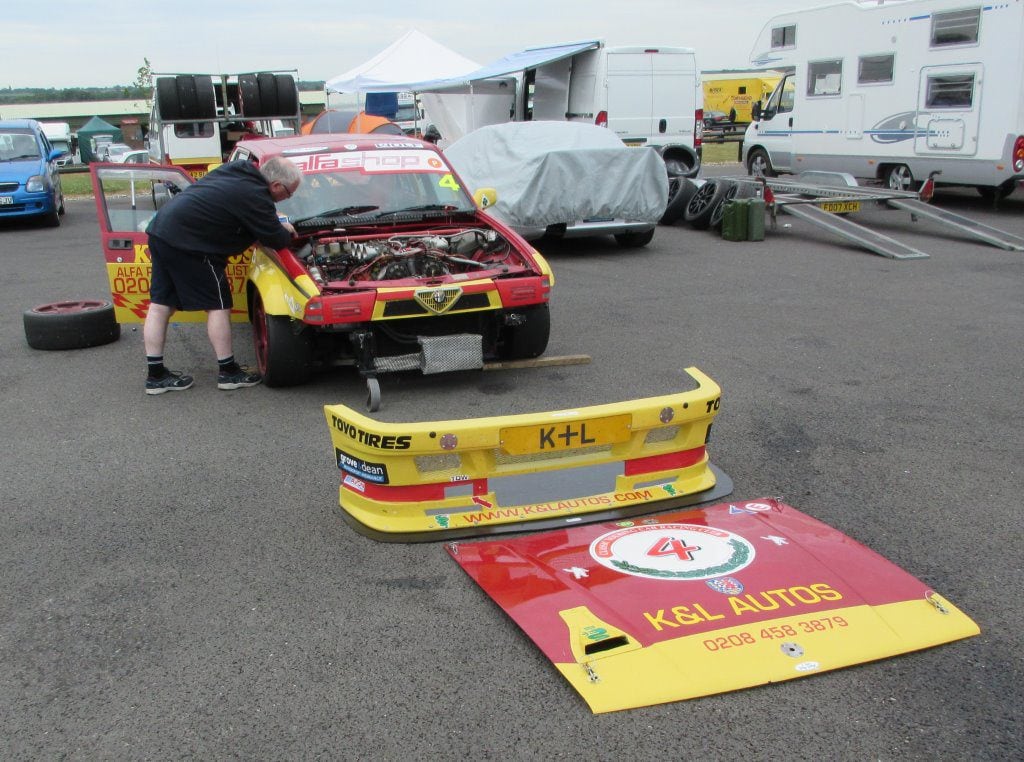 Tom Hill comes to Combe – his first visit – with a healthy lead on the Championship points table but it will be good to see the return of James Browning who pushed him so hard at Silverstone back in May. James’s 147 has undergone an engine rebuild since so it should have the potential to keep Tom on his toes. With car or not, James has been keeping in touch with everything going on by coming to help Bianco (and me!) at Zolder and Oulton. Dave Messenger took two third places last time out at Oulton, which restored his confidence after early disasters, while Simon Cresswell had mixed fortunes at Oulton after a stellar weekend in Belgium. He still lies second in the points, though, and if he finds that Combe is a circuit that suits him, he could well be up in the top three again. Beyond that, there should be a good fight in the TSC mid field with the likes of Mike Tydeman, the constantly improving Andrew Bourke, Jeremy Chilton, Andy Inman and Paul Webster all trying to make their mark – hopefully without any of the contact that we suffered at Oulton.

Qualifying at Combe is at 2.35 on Saturday afternoon, with the races late on Saturday (5.20 ) and early on Sunday (9.50) – so if you pass cars going home on their trailers on Sunday morning, you will rue that extra hour in bed as you will have missed us! Mind you, there is a jam packed programme and you will find Gavin Watson and Chris Snowdon sharing Gavin’s 1600 Giulietta in the HRDC Touring Car Greats on Saturday afternoon at 1.05.