The Snetterton double header nearly three weeks ago brought us to the mid point of the season (already?!).

We now move on to one of our favourite circuits, the testing Cadwell Park, for rounds 8 and 9 of the 14 race calendar with Brands Hatch, Croft and Donington to follow. The outcome of the two Snetterton races moved James Bishop back to the top of the points table while previous leader, Ray Foley, was a non starter after an engine problem in qualifying. He left early with no more points on the board although he maintains top spot in the Power Trophy. Despite various problems, Dave Messenger did well enough to move into the runner-up slot overall, his best ever position in the Championship. Graham Seager jumped up to 3rd, at the same time taking over the Modified class lead. Andy Robinson now lies second in the class in front of previous leader, Bryan Shrubb. With a maximum of 44 points in each class up for grabs at Cadwell, there is plenty of room for more changes by the time we go home on Sunday afternoon and when the point table is next updated we shall also take into consideration dropped scores (the three lowest scoring results including any non starts or non appearances).

“Master Cadwell Park and You Can Race Anywhere”

that was Marcus Pye’s recent headline in one of his Club Autosport columns.

“One recent sage said the above to me at the Lincolnshire circuit on Sunday. Having made the 500 mile pilgrimage twice in three weekends for VSCC and 750 Motor Club events, I wouldn’t disagree. Much of the racing I’ve witnessed…..has been of the very highest order, as if the grandeur of the place inspires clubmen. How could it not?”

Once again, our annual visit to Cadwell has gathered a strong and varied Modified entry, despite the absence of Snetterton front runners Anthony George and Vincent Dubois. Replacing them we have Roger Evans, back with his 147 GTA, now with a 3.2 litre engine, Barry McMahon with his Giulietta turbo engined 156 and brother Roger in a 147 GTA Cup car – not the one that Arthur McMahon ran at Snetterton last year before the engine blew in qualifying, but another sourced in Ireland. Barry has raced the 156 at Cadwell before (in 2012) finishing 4th in one of the races, chasing Alastair Kellett’s rapid Punto Abarth home on a damp track. Andy Robinson is hoping for another good run in his 3.8 156 – he took a 3rd place at Cadwell last year – while we are pleased to welcome back the 33 16v’s of Chris Snowdon and Bryan Shrubb. Bryan pretty well dominated the two Cadwell races in 2014 but Chris Snowdon is always a formidable contender in the John Sismey team car. Finally, Graham Seager will be making his first Cadwell appearance with his familiar supercharged GTV, having missed out last year and after his performances so far in 2015, he will be hard to beat although this might depend on qualifying well and not letting the 33s or Roger Evans get in front. I don’t think anyone will approach Adie Hawkins’ lap record (1’34.844”) but we should at least see some sub 1’40” times. After the five car Power Trophy entry at Snetterton, It looked as though we would be back to just one for Cadwell – Ray Foley’s 156 GTA – but a late entry by Nick Anderson with his 33 means that Ray will have some genuine opposition once again.

The strength of the Twin Spark Cup is once again emphasised by Cadwell’s 16 car entry. James Bishop won both races last year but didn’t take pole, as that honour fell to James Ford. However, JF otherwise had a weekend to forget and will be keen to make amends this time. Another to perform well a year ago was Steve Potts and he is long overdue for a strong result in 2015. Paul Plant has put in a late entry with his 156 and not having had the chance to compete with the absent James Bishop when he won at Oulton at the end of May, Paul will see the two James’s as his primary target on a circuit he knows well. Tom Hill was out of luck last time out but should have his new engine for Cadwell – so new car plus new engine should allow us to see how he really can perform despite the unfamiliarity of the circuit. Andy Hancock has been driving well this year and was unlucky to have a tyre come off the rim in the second race at Snetterton but he may be hard put to stay with the top three or four. Consistency may go in his favour though. Further down the field, there will undoubtedly be plenty to watch with the continuation of several battles that have built up during the season. Simon Cresswell sadly missed Snetterton following an engine problem in testing but he is likely to be a contender once he gets to know Cadwell’s twists and turns, likewise Richard Stevens with his trusty 145 – 5th last time out. Richard Ford, James’s brother, returns with his 146. He made a troubled debut with the car at Cadwell last year but he will start with an advantage over several drivers in that he knows the circuit. One of those who doesn’t , surprisingly, is Dave Messenger but Dave seems to be a quick learner and even if he doesn’t shine in qualifying, he should in contention for a top four finish by the end of the weekend although he will no doubt be hoping for better in order to strengthen his championship position. Avon Racing are running two cars again – for Andy Inman and Paul Webster – while Luther Blissett will be giving his 156 another outing after winning his class, accompanied by Mike Watson and Russell Anderson, in the 360 Club’s 6 hour endure at Snetterton a couple of weekend’s ago. The Twin Spark field is completed by James Browning’s very smart 147 and Jeremy Chilton’s 156. 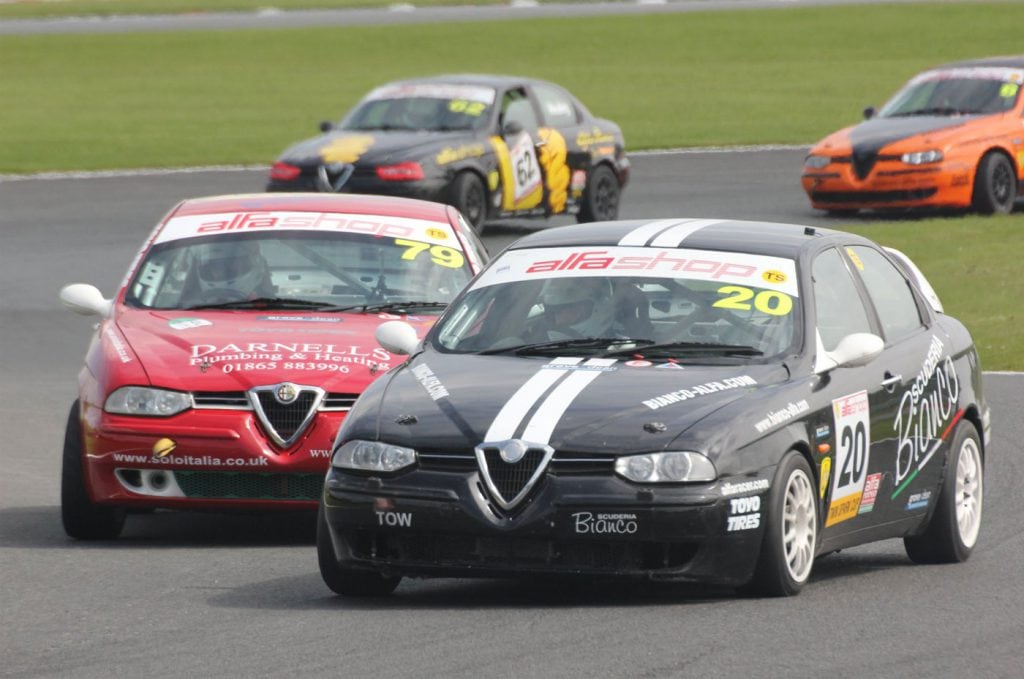 The social side at Cadwell will be looked after by a BRSCC party on Saturday evening – complete with hog roast and a band to keep us entertained.

“my favourite place in the country to watch drivers at work is not visible from either commentary box alas. Stand beside the devilishly cambered Hall Bends, where the track writhes and burrows through the woods, and you will quickly spot the technicians from the rest”.