We are eagerly anticipating another competitive race weekend as the BRSCC Alfa Romeo Championship makes its almost annual visit to the challenging twists, turns and gradients of the “mini Nurburgring” tucked away in the heart of the picturesque Lincolnshire Wolds.

Overtaking always requires an element of bravery due to the narrowness of the track and any lapse of concentration at any of its tricky corners can land a driver in instant difficulties.

Leading the championship after the first four rounds at Silverstone and Anglesey is our 2016 champion Tom Hill in the black and gold Bianco-prepared Alfa 156. Paul Plant gave Tom something to think about at Anglesey but generally he has been the class of the Twin Spark field, driving swiftly and with maturity to maintain a significant margin over the rest of the field. Hot on his heels in the overall points table and leading the Power Trophy class in the ex Clive Hodgkin 3.2 litre 156 GTA is Paul Webster, double winner at Silverstone and finishing in strong class podium positions in Anglesey. In third place overall as we enter this weekend’s races is Simon McFie in one of the impressive and immaculately presented Southgate Racing Fiat Punto Abarths. Simon is second in the Power Trophy class, having had strong and reliable running from his Abarth, and apart from some baffling problems with the officials at Silverstone (thankfully overcome) things have deservedly gone well for him. 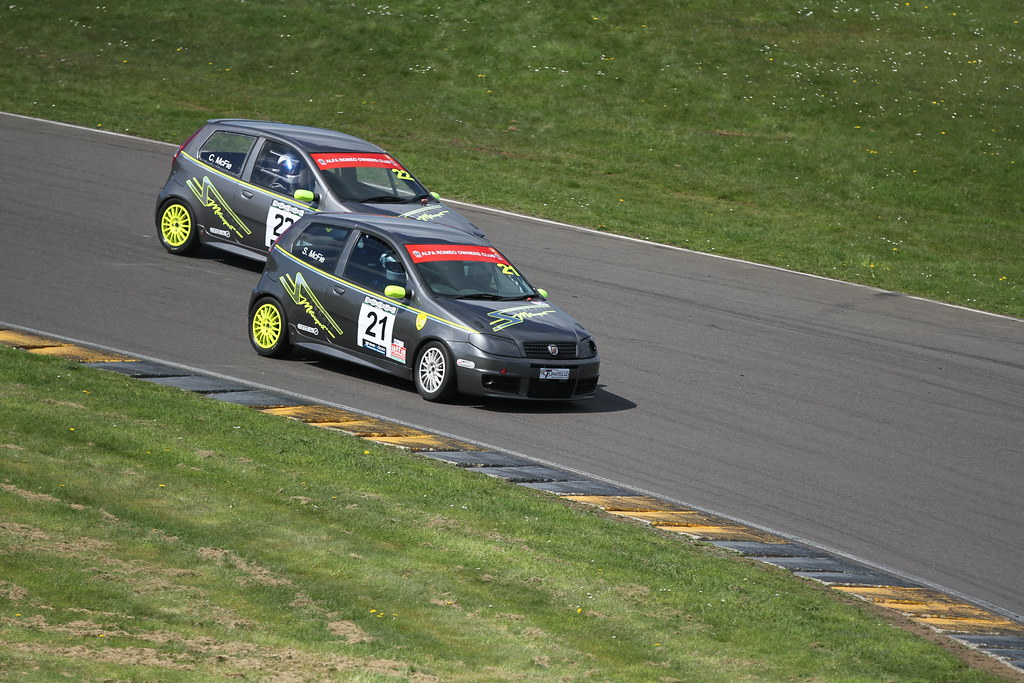 Second to Tom Hill in the Twin Spark Cup and 4th overall is Richard Ford in the Hitek Electronic Materials Alfa 156. Richard has shown excellent pace this season and has made a step change in the effectiveness of his driving and has dealt well with problems not of his own making. Mike Tydeman is in third position in the Twin Spark Cup and 5th overall. Like Richard, he has generally driven smoothly in the early season meetings and reaped the benefits in so doing, picking up good points finishes.

The bulk of the entries this weekend are once again in the Twin Spark Cup with cars in this class making up almost two thirds of the total entry. Joining Tom Hill, Richard Ford and Mike Tydeman will be regular competitors Dave Messenger and Simon Cresswell.

Dave has had a frustrating time in his Darnells sponsored 156 with minor technical issues having an impact on his results out of all proportion to their seriousness, but has performed strongly and hasn’t let these get him down – he is a top performer on his day and the results will certainly come. Simon was unable to race at Silverstone due to the scheduling but was back in the leading group at Anglesey. Contact with other cars hampered his progress there, but if he can steer clear of this at Cadwell he’s sure to reap the benefits his considerable driving skills merit. 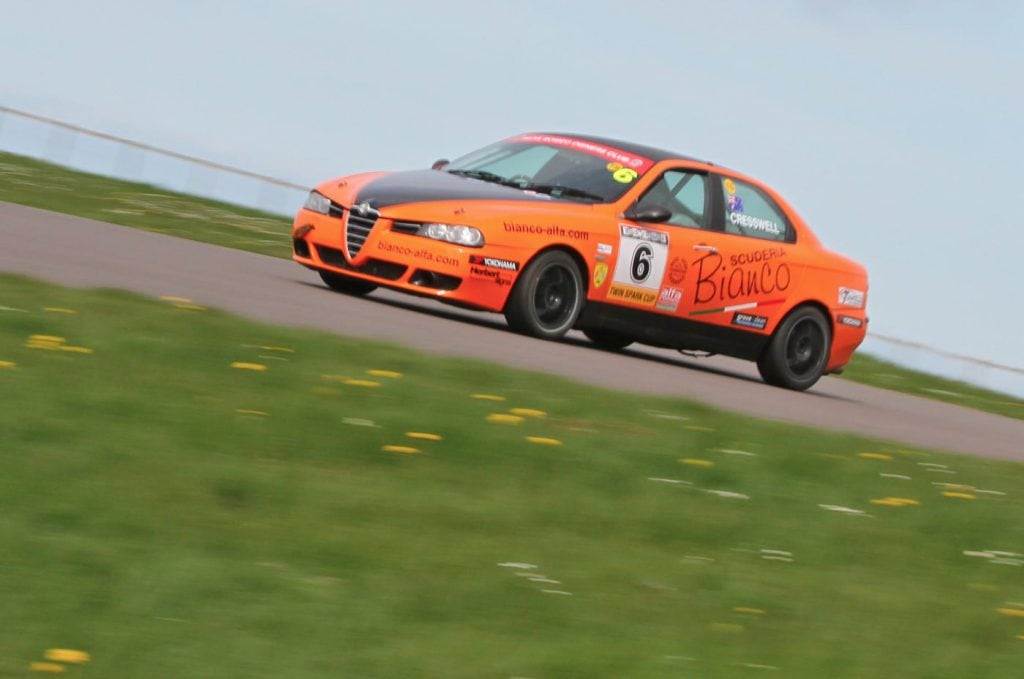 After a frustrating series of technical problems at Silverstone and the first Anglesey race, Kristian Leith showed very impressive form in the second Anglesey race pulling well clear of the majority of the field to finish an impressive 3rd in class. If he can repeat and build on that form he will be a very strong contender at the top end of the Twin Spark Cup placings.

It will be a great pleasure to see Riccardo Losselli back on track at Cadwell. The major accident he suffered at Anglesey was not something he could have avoided and it capped a frustrating weekend for him after experiencing electrical problems in the first race. He is due a change of luck for sure and some reliable runs should enable him to settle and begin to show improved results. Andy Inman will be back at Cadwell after a rare absence from the Championship at Anglesey due to an important family event. We all missed his inimitable presence there so a huge welcome back Andy! 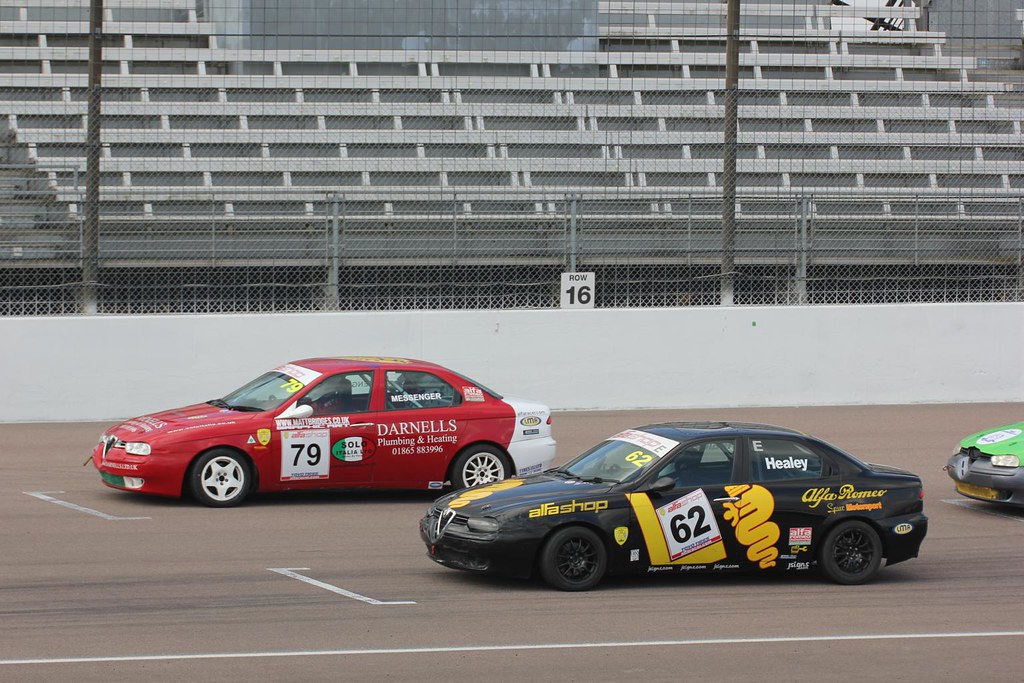 Making a welcome return to the Championship in his 156 is Chris Healey after a couple of years out. Chris will be sharing the car for the remainder of the season with daughter Mel Freeman. Chris competed strongly in the old Class C and in Class E with his Spur Garage-prepared GTV and 156 respectively and it is great to have him back with us. Mel was our 2010 Champion and a very strong competitor in the old Class E and it will be fascinating to see how she gets on after a break from racing of several years. 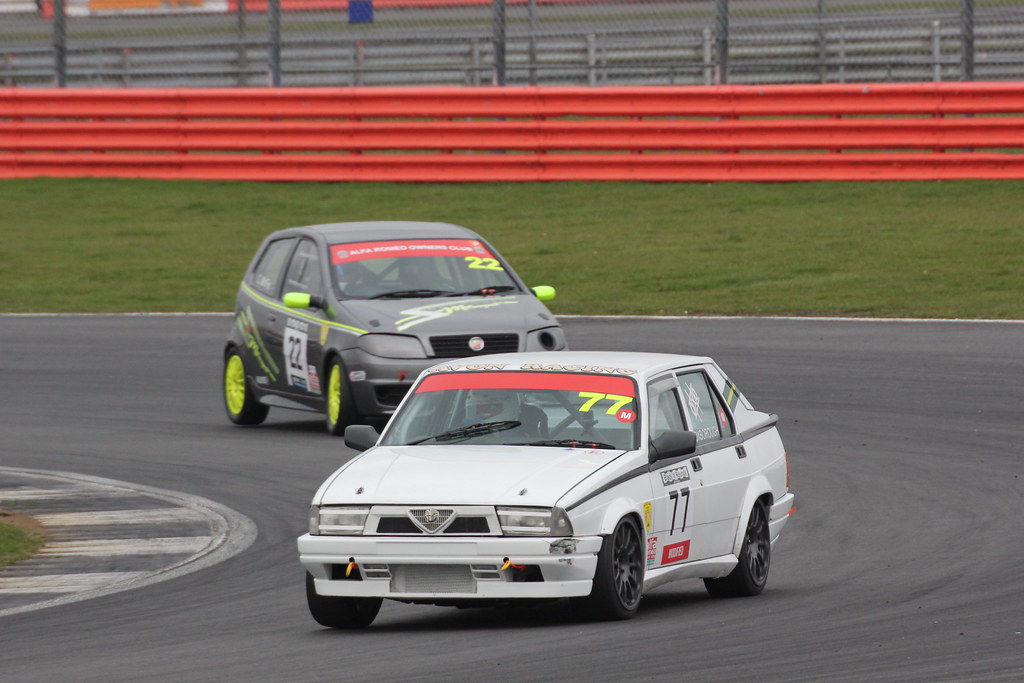 In the Modified class, Chris Oxborough is making a welcome return after missing the Anglesey races and is joint leader of that class with Mervyn Miller, the latter unable to compete this weekend. Chris will be in his supercharged Alfa 75 3 litre V6. It is a shame that he will be the only car in the Modified class but expect Chris to be a strong contender for overall honours this weekend. Lining up alongside Paul Webster and Simon McFie in the Power Trophy class will be Simon’s brother Chris in the second of the Southgate Racing Fiat Punto Abarths and Scott Austin in the Alfa 155 previously raced by Ian Brookfield. Chris is a very quick driver but has uncharacteristically experienced a series of reliability issues this year which have held him back. Hopefully his considerable expertise will have solved these giving him a good clear run at Cadwell where he was the overall winner last season. Scott has been progressively tackling and solving the mechanical issues he has experienced with the 155 and his pace has steadily improved. His determination and perseverance is bearing fruit and he will hopefully have a successful weekend with that lovely car.

Stephen Green will again be on hand in the Paddock at Cadwell to ensure that competitors are parked and set up where they should be on the Paddock Plan. Please give Stephen your full cooperation. Signing on will be in the Paddock Office. Our driver briefing will be in the Bianco tent at 10.35 on Saturday morning – please make sure you are there in good time. Let’s all have a great weekend’s racing – see you there!