With Alfashop continuing as title sponsor for a ninth straight year (and just as I completed this review we heard the splendid news that they will celebrate a 10th year with us in 2015) the BRSCC Alfa Romeo Championship started the 2014 season at Silverstone back in April full of optimism.

With strong support in the Modified (A1/A2) and Standard Production (E) classes, this was to be more than justified with 40 drivers scoring points over the 8 meetings (14 rounds) that made up a varied calendar that took us to Donington, Oulton Park, Cadwell, Snetterton, Anglsesy and Rockingham while two visits to Silverstone saw us enjoying both the National and International circuits. And, as ever, there was welcome variety in the drivers who stood on the podium , particularly amongst those contesting race wins overall. However, it was Class E that dominated the Championship points table, providing four of the top five finishers, the 2014 title going to James Bishop after what can only be described as an exemplary season with his 156 during which he started and finished all the races, winning seven times and never being out of the top three. 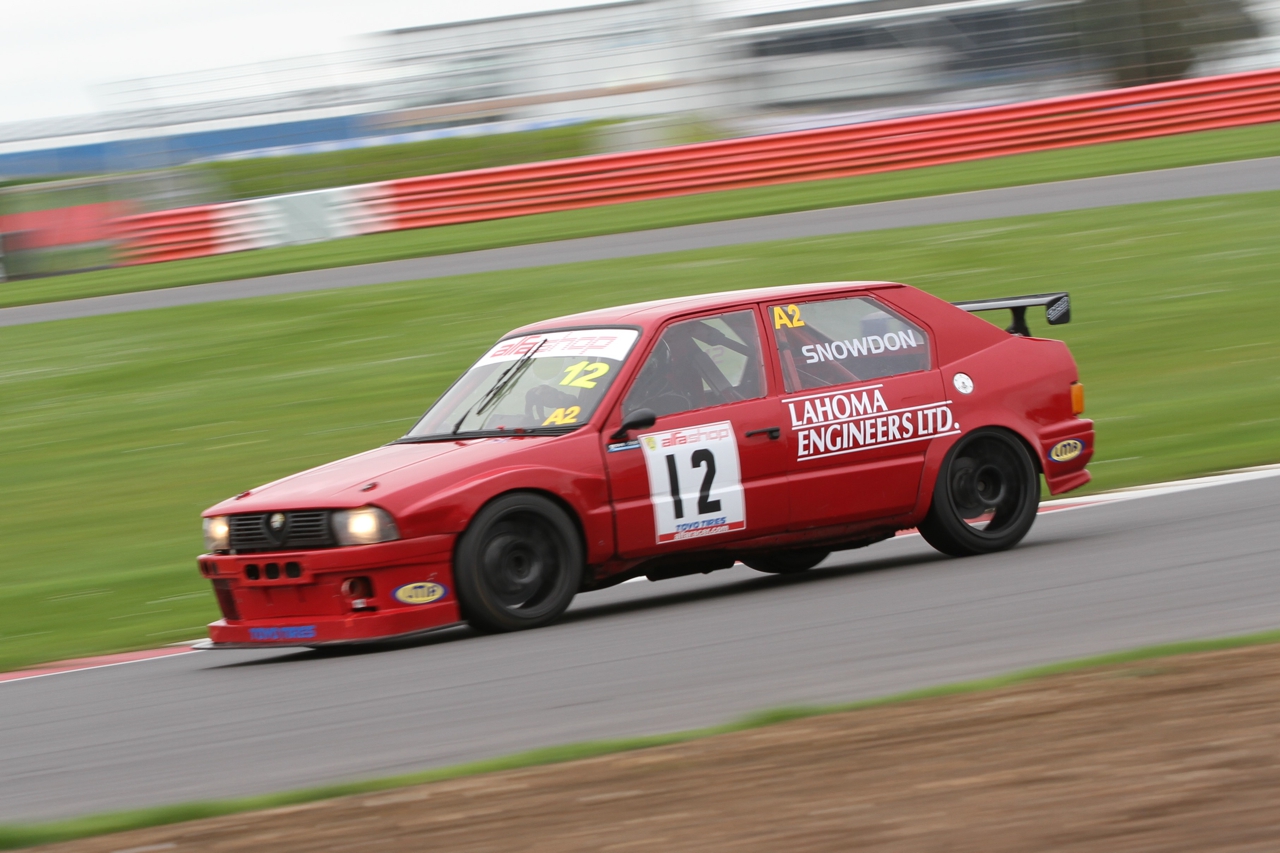 Despite the close racing offered by Class E, it was the more powerful cars that often grabbed the attention as we enjoyed some excellent battles at the front. Interestingly, it was not always Class A1 that took the race wins as the smaller engine A2 cars also shared the spoils. Chris Snowdon and Bryan Shrubb shared five wins between them in their effectively nimble 16 valve 33s – Chris at Silverstone and twice at Rockingham, and Bryan in both races at the Cadwell double header. Class A1 brought out some new and interesting car/driver combinations. 156s appeared with a variety of engines with both turbocharged and normally aspirated versions. The success rate was somewhat unpredictable but Anthony George with his 2 litre turbo won twice (Snetterton and Silverstone International) in the three races he contested while also going to Zandvoort for a fine win a European Alfa Challenge race in August. Vincent Dubois took a brave step in running his 156 with an engine from the 155 Q4 which itself was based on the motor from the Lancia Delta Integrale. Inevitably there were the odd teething troubles but the car was good enough for podiums at Oulton, Snetterton and Rockingham. A unique approach was that of Barry McMahon who fitted a 1750 Giulietta Turbo engine but the car has yet to achieve the hoped for performance. That certainly could not be said of the very standard looking 3.2 litre 156 GTA shared by Clive Hodgkin and Robin Eyre-Maunsell, Clive in particular putting in some storming performances, one of which could have taken him to an overall win at Rockingham but for the opposition of Chris Snowdon and Graham Seager (GTV). The other 156 to race was the beautifully turned out example of Andy Robinson, initially with a 3.8 engine and then a 3.2. Sadly Andy suffered all kinds of on-track woes culminating in two accidents in one weekend at Anglesey but vows to be back in 2015. 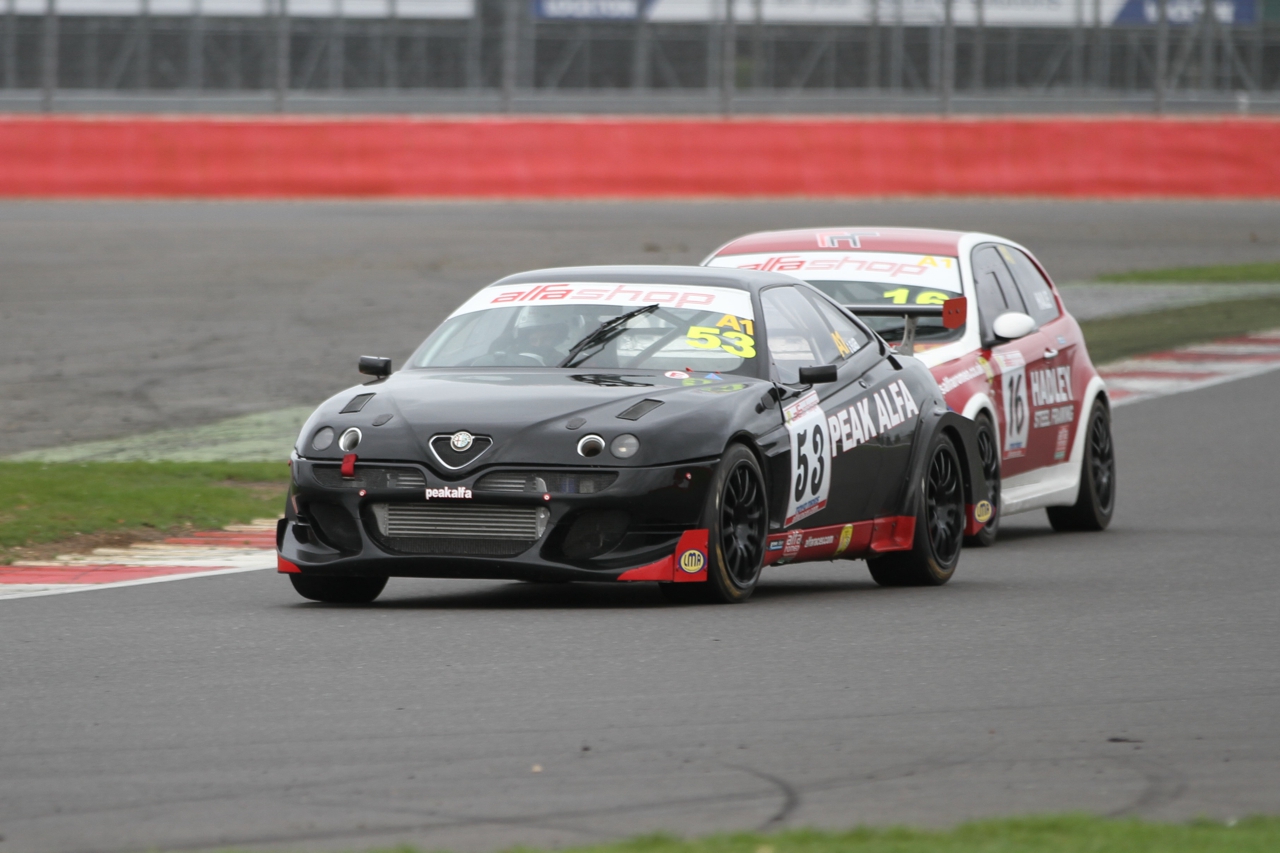 Graham Seager had always wanted to race a modified car and for 2014 was able to buy Roger Evans’ supercharged 3.2 litre GTV. It proved a difficult car to get used to after racing the production version but when all was going well with weather, tyres and the odd mechanical problem or driver error not getting in the way, Graham set a strong pace and took wins at Oulton, Anglesey and Rockingham. A couple of good results at the final Silverstone meeting was enough to take him through to a well deserved  3rd overall in the Championship, the first non Class E driver, winning Class A1 in the process.  Guy Hale took a win with his 147 GTA in round 2 and we expected him to be a  real contender for the class championship but thereafter nothing went right and we didn’t see him after Cadwell in mid year. For the final round, we had another 3.8  147 GTA entering the fray as a toe in the water for next year, Roger Evans moving back into A1. If he had been able to race more, Ian Stapleton would have been a formidable contender with his sinister black 3.8 litre GTV6 but wins at Donington and Silverstone International were enough to remind people of his and the car’s potential. We also saw the first appearance of a Mito in the second half of the year in the hands of Dave Peddie – good to see a current range car in the championship. Keith Waite (75) and Ian Brookfield (164) both managed one double header apiece despite their busy involvement with the cars of other competitors, Keith scoring an overall 3rd at Anglesey. 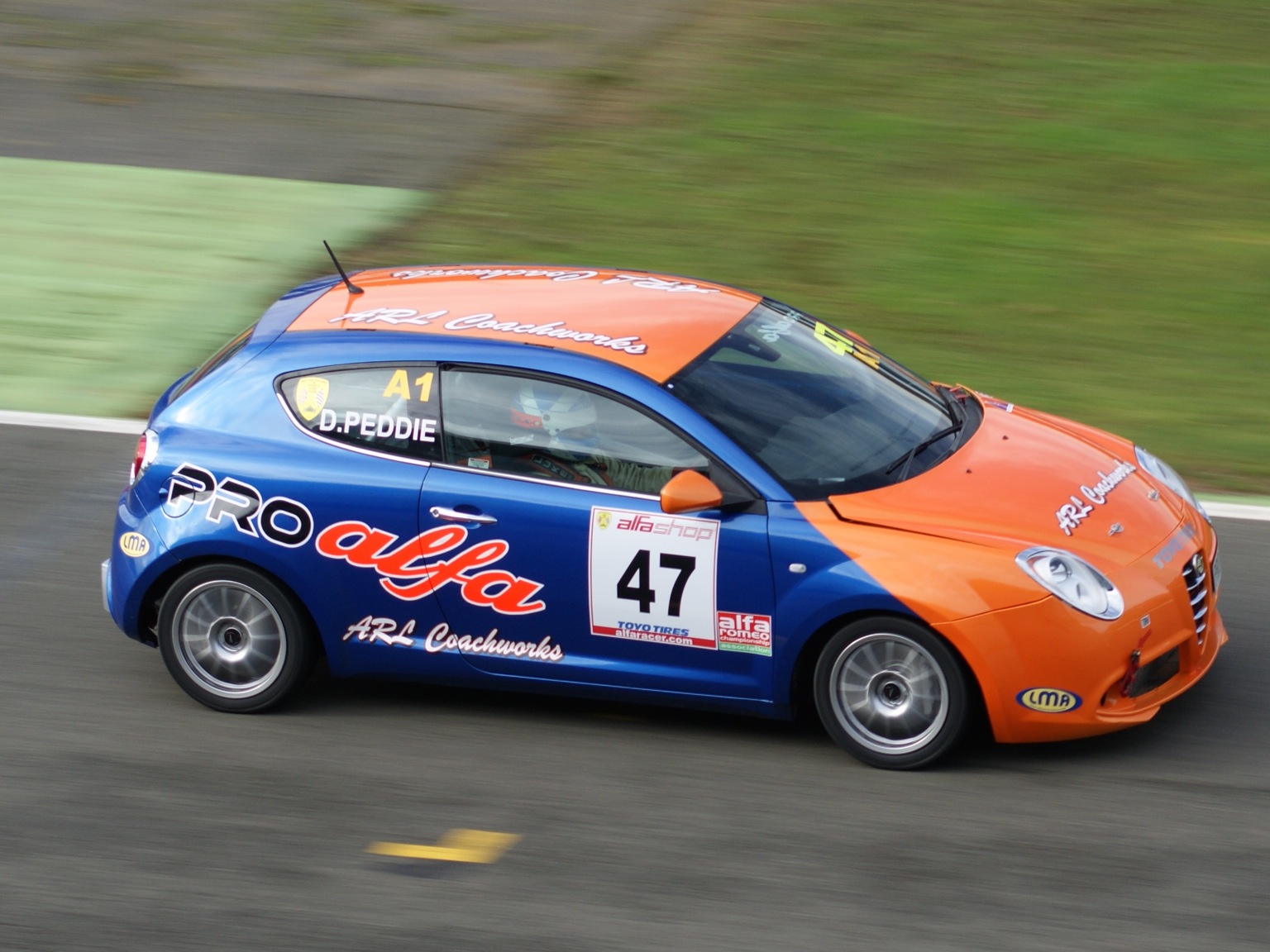 The successes of Chris Snowdon and Bryan Shrubb were not enough to win either of them Class A2 as they were not able to enter enough races. As a result it was the 8v 33 of Nick Anderson, with nine races under his belt, who held off Bryan’s last minute challenge despite a severe gearbox problem at the final two rounds. A serious contender in A2 in the final two meetings was Louise West with her 8v 33. The entries in Class B and Class C were very weak in 2014 but that didn’t stop Darelle Wilson (GT Diesel), Roger Evans and Ray Foley having some fine drives, Darelle , Roger and Ray mounting the overall race podium on several occasions. Darelle won Class B while Ray Foley took C at the final round. 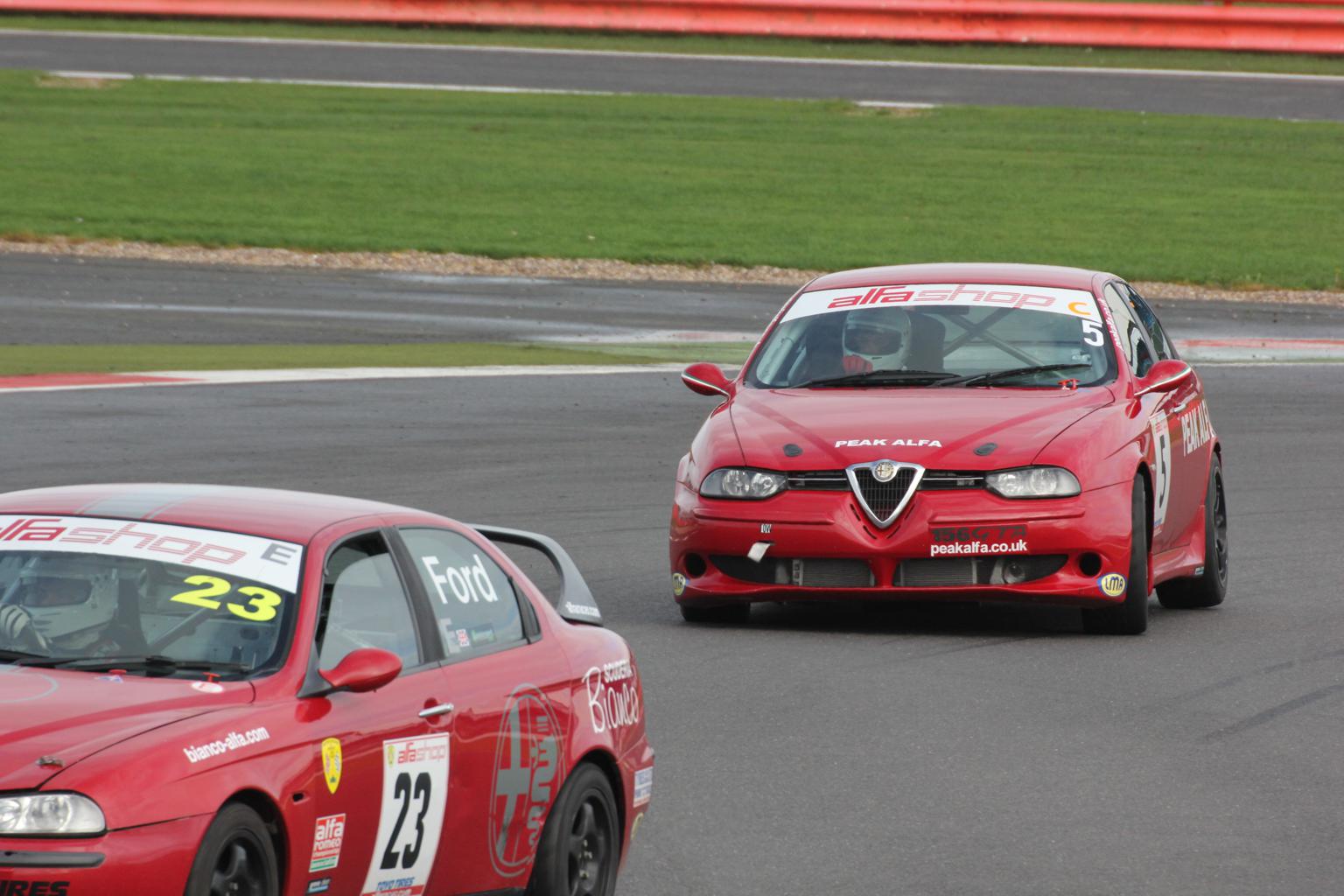 For several seasons now, Class E (Standard Production 16v) has provided us with some of the best racing in the Championship and there is no doubt that the standard of competition in 2014 was very high indeed. Despite that, the best will always shine through and this was certainly the case with the top two in both the class and the championship. I have already referred to overall title winner James Bishop’s superb season but he always had to be on the lookout for his nearest rival James Ford (156) who was quick enough to take five wins during the season, his best probably being in race two at Anglesey. James should have challenged James Bishop for the title but retirements at Cadwell, Snetterton, Rockingham and Silverstone International robbed him of chance to maintain the challenge to his fellow Scuderia Bianco driver. The only other class winner during the season was Tom Herbert (156) whose undeniable talent showed through at Donington and Rockingham. 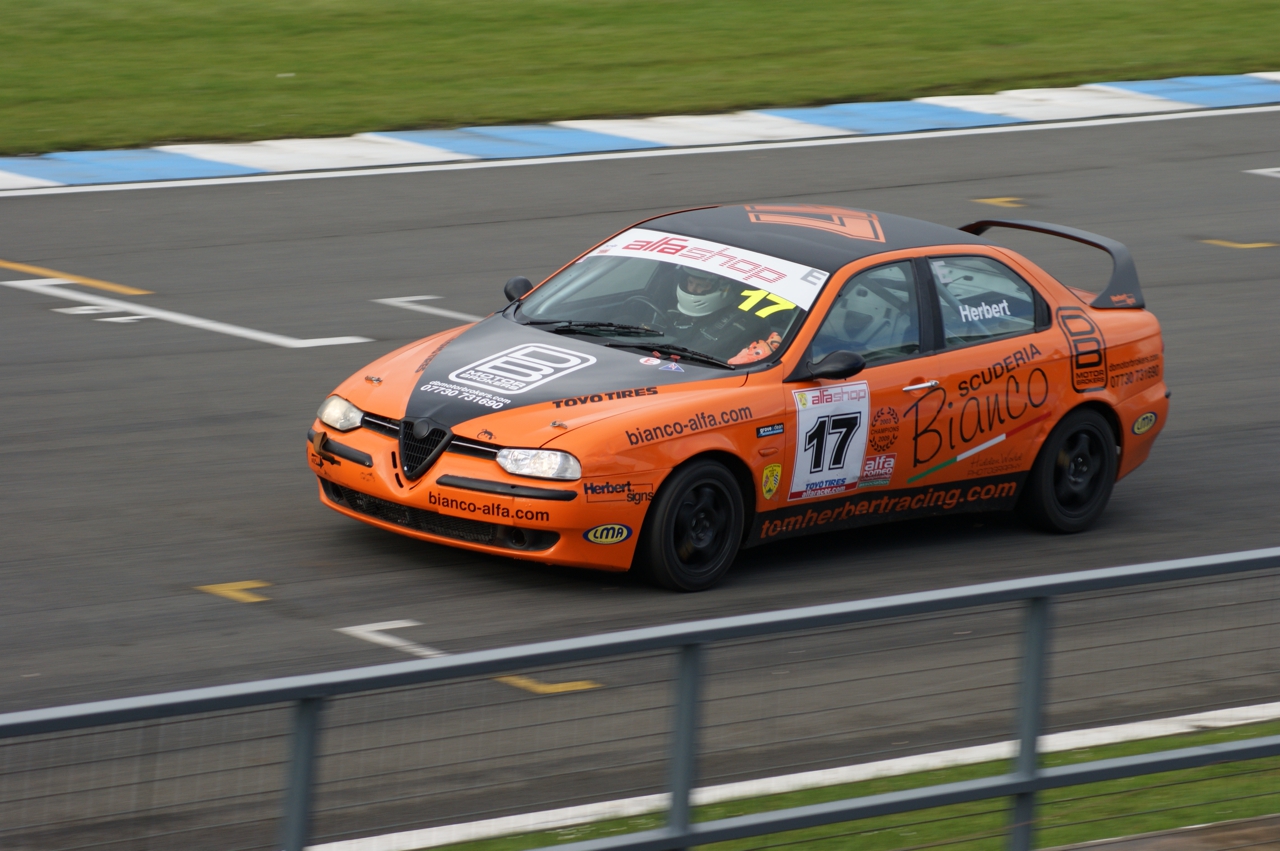 Steve Potts (147 and 156), Andy Hancock (156) and Jon Billingsley (147) all featured strongly, if inconsistently at times, throughout the season. Each had their highlights, a pole for Steve at Anglesey, a 2nd place for Andy at Snetterton and time in the lead and 2nd place finish for Jon at Rockingham. Steve also won the trophy for the highest placed newcomer in the Championship. If he had been able to race more, I am sure that Dave Messenger would have finished higher in the points table, as he did in 2013, but his race to 2nd place behind James Bishop in the final round at Silverstone showed that he should have been a regular top three finisher. The 145s of Kristian Leith and Tom Eastwood both showed up well on occasions while Steve O’Brien was happy to take a podium at Snetterton in July with his 147. 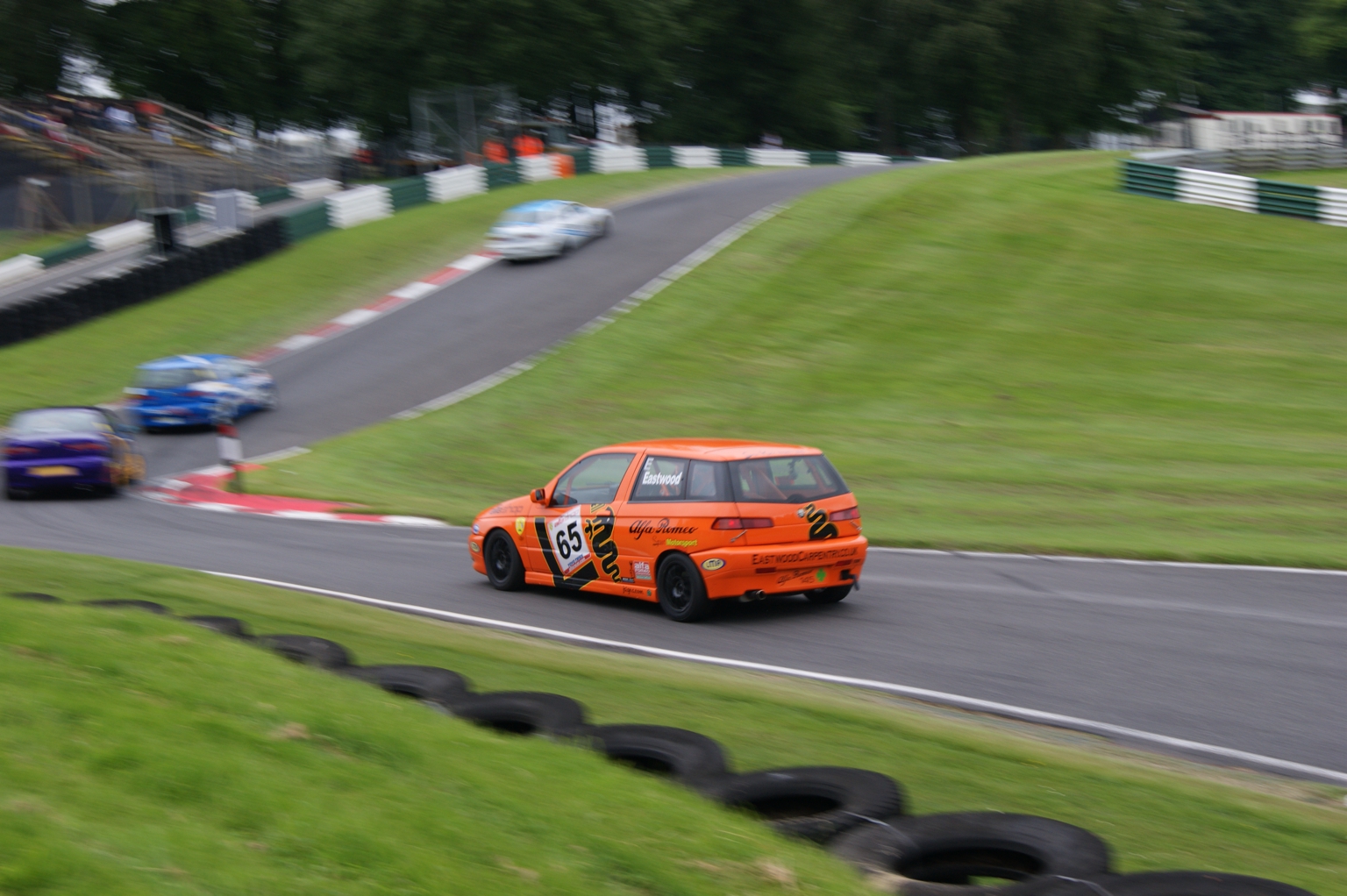 It was sad that most of the budget set aside by Matt Daly to compete in 2014 had been eaten up by the post Thruxton (2013) rebuild but in his only outing on Anglesey, he showed that the speed was still there. A number of new drivers joined the Championship this year, probably the outstanding of which was ex karter (since he was 6 years old!), 18 year old Tom Hill who only raced at Anglesey and Silverstone but impressed mightily, in particular with his 2nd place in the penultimate round at Silverstone. Richard Ford and Russell Anderson both appeared in the only 146s in the Championship. It was good to see regulars Andy Inman, Chris Healey and Luther Blissett enjoying their racing and to welcome back 2010 Champion Mel Freeman (was Healey) in the family 156. And one shouldn’t forget fellow lady racer Stacey Dennis who bought her own 147 before the final rounds at Silverstone and then went on to finish a superb 2nd in a very wet Ladies Handicap Race at the beginning of November on the Silverstone National Circuit. Paul Plant only managed one UK outing, concentrating on the European Challenge for his race appearances. 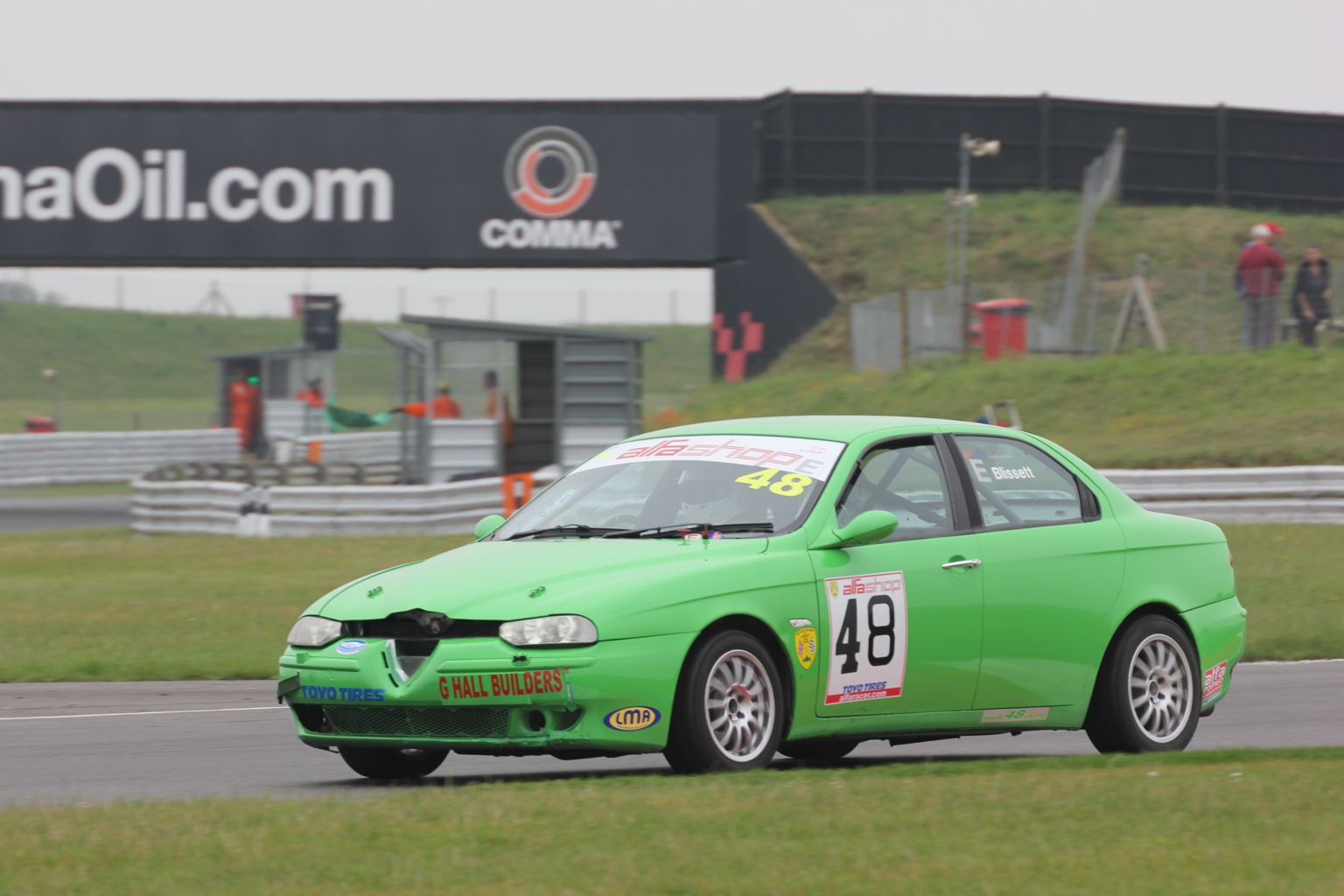 Bianco Auto Developments deservedly won the 2014 Championship Preparers Award, their cars taking four of the top five places  while Anthony George, by winning the last race of the season, took the coveted Kevin Griffiths Trophy. A notable milestone during the past year was a record Class E entry of 18 cars, over half the grid, for the last meeting of the year and we expect to build on that in the future. 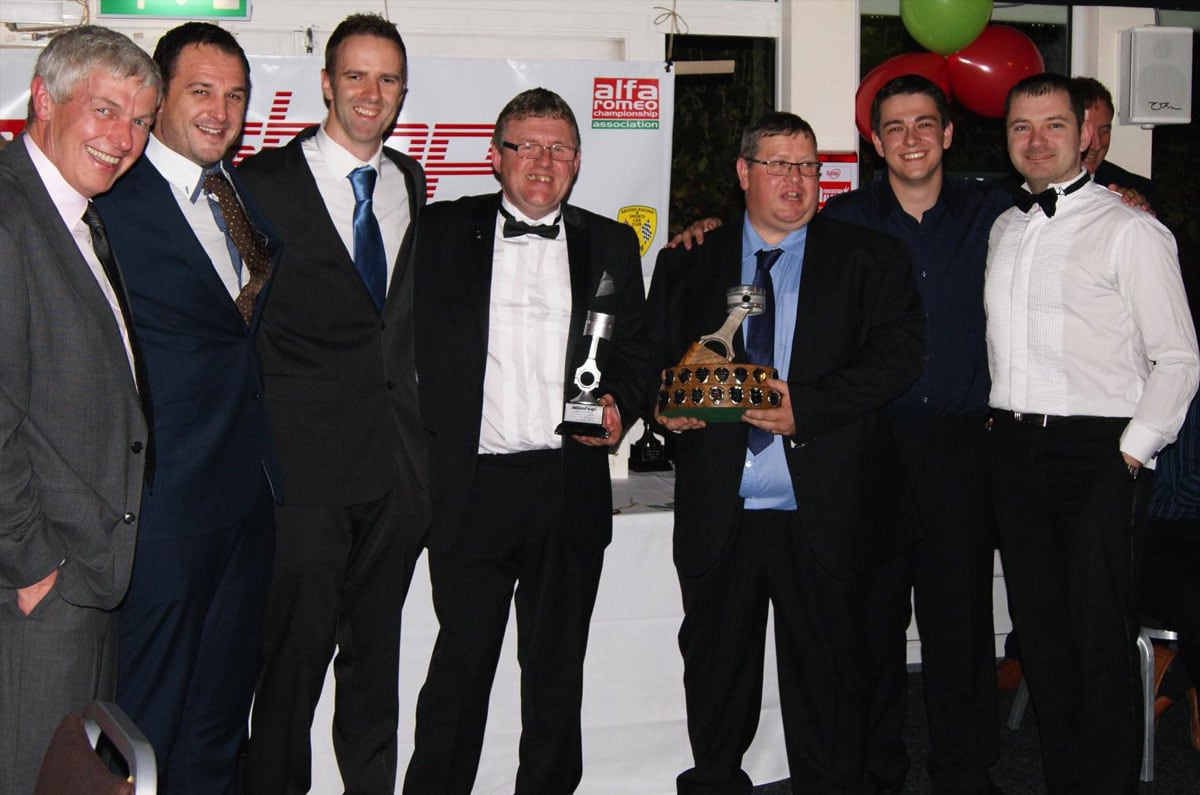 2014 saw the Championship operating as a co-operative venture for the first time and it has been viewed as a great success, allowing many more people to become involved. In addition, our thanks must go to the BRSCC for their efforts on our behalf and, in particular, Drew Furlong – our named co-ordinator – Liz Goodrich who looked after entries, Dominic Ostrowski and Brian Hopper, our eligibility scrutineer. And we must never forget the families and friends who came along to support so many drivers throughout the year. And did you enjoy all the TV and in-car videos? I certainly did!

There will be big changes to the Championship class structure for 2015, cutting the number of classes from six to a more manageable three and, as reported at the beginning of this review, it will be a great pleasure to see Alfashop back with us again. More on this in the New Year.